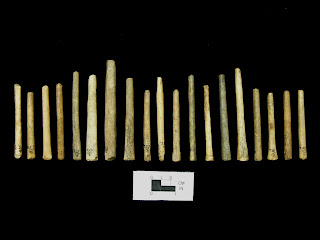 Figure 1, antler flakers
Among the essential media utilized by Native American cultures for making tools for daily use were the horns from deer, elk and other cervids living around them. Much of this material, better known as antler was worked and shaped by carving, scraping, grinding and smoothing with stone tools and in more recent times with tools of iron such as axes, knives and other similar items obtained through trade with Europeans after their arrival in the New World. Many of these objects are found in the material record when archaeologists investigate Native American habitation sites through careful excavation.

In Pennsylvania and other parts of eastern North America some of these antler objects were used to make something else – in a manner of speaking, tools to make tools. Examples of this are the so-called “antler flakers” used to knap arrowheads and other stone tools (Figure 1). These unique tools are remarkably uniform in shape and size from region to region. Antler flakers, however, vanish from the archaeological record by the mid-1630’s when their utility becomes obsolete due to new innovations in Native American tool kits . Coupled by a cursory search of the files and repository at the State Museum of Pennsylvania’s Section of Archaeology and a review of the literature on the topic provides us with information on a sample of these objects which follows. 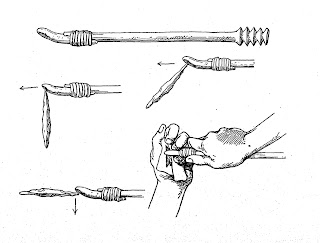 For comparison, data from three cultural regions around the Finger Lakes of New York and, the lower Susquehanna of southcentral Pennsylvania were used that provide us with some interesting insight on antler flakers. During the early to mid-sixteenth century antler flakers show up on early proto-Mohawk sites located in the Mohawk valley of eastern New York. There, three sites, Garoga, Klock and Smith-Pagerie yielded ten antler flakers, a small number when compared to compilations from other sites (Funk and Kuhn 2003). At a fourth Mohawk site, the Rice’s Woods site dated to the AD 1580 -1614 period, six additional antler flakers were found all sharing similar morphological attributes (Snow 1995; Figure 5.26).

Within the Seneca sequence (Wray 1973) antler flakers have been found at five early proto-historic Iroquois sites where they are apparently common, in fact, quite common (Wray et al. 1987; 1991; 2001). At the Adams, Tram and Cameron sites, Seneca settlements occupied in the late 16th to possibly the earliest decades of the 17th century, the morphology of antler flakers mirror that which is found in the Mohawk data, albeit present in greater frequency. These variations in the data might best be explained by differences in the provenience data of the two regions (ie. middens vs. cemeteries). 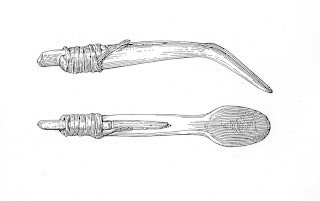 In the lower Susquehanna valley, antler flaker data from the Susquehannock occupations at Schultz and Washington Boro village sites show a similar chronological pattern when comparisons are made with the New York sites, especially Seneca and the later Rice’s Woods Mohawk site. Excavations conducted at the Schultz and Washington Boro sites in the early 1930’s (Cadzow 1936) and again at Washington Boro in the early 1950’s (Witthoft nd.) followed again at Schultz in the 1970’s (Smith 1970; Casselberry 1971; Kent 1984) provide us with the largest sample of antler flakers for Susquehannock. For villages of the lower Susquehanna valley the majority of these tools were found in the middens and trash pits of the longhouses and near the palisades where the Susquehannocks would go to build their settlements.

Why do antler flakers disappear from the archaeological record around the beginning of the 17th century? The reason simply may be the change in tool technologies of the Native Americans at that time. With the infusion of European made trade kettles beginning around AD 1615-1625 stone arrowheads were rapidly being replaced with metal tipped arrow heads fashioned from cut kettle scraps made in the shape of their stone age predecessor. These small bit lethal weapon tips begin to turn up at the beginning of the 17th century. By the second to third decade of the 17th century metal arrow points are extremely common on all Iroquoian sites. By the third decade of the 17th century a few sites begin to yield evidence of guns which were beginning to be introduced into the native material culture in exchange for furs and other desired commodities. By the 1640’s (post Washington Boro Period) guns were largely the preferred weapon of choice of the Native American. Eventually bow and arrow technology was replaced by these new inventions which negated the need for the antler flaker.