Kate McCann was a pioneering woman in the field of Americanist archaeology in the 20th century. Early in her career, she was one of the few women to hold a supervising position on a Works Progress Administration project (WPA) in the 1930s at the Irene Mound site in Savannah, Georgia. She later contributed much to the archaeological record of the middle and upper Delaware Valley in New Jersey and the North Branch of the Susquehanna River in Pennsylvania. Throughout her career she bridged the gap between public interests, avocational archaeologists and professional institutions. She lent her expertise to local Archaeological Society of New Jersey (ASNJ) and Society for Pennsylvania Archaeology (SPA) chapter excavations, published investigation results, promoted the donation and long-term curation of collections for future study, contributed to regional syntheses, and created exhibit spaces for broader education and outreach.

Born in Carlyle, Montana, McCann studied Latin and classical archaeology, receiving her BA from the University of Montana in 1930 and her MA from the University of Wisconsin in 1931 before pursuing her Ph.D. in anthropology from the University of Pennsylvania in 1937. McCann was recruited with fellow U of Penn graduate students to fill professional staff positions created as part of New Deal archaeological investigations in the southeast. The Irene Mound site was investigated from 1937 to 1939. It was a unique project for the time, not only for the position that McCann held, joining the team in 1938, but also the important roles that over eighty local African American women fulfilled as the excavators at the site. For images of and more information about their contribution to the WPA Irene Mound investigation visit the Savannah Image Project of Armstrong Atlantic State University (The Women of Irene Mound).

McCann authored several interim reports on the ecology, faunal remains and pottery of Irene Mound (Browman, 2013) and co-authored the final site report (Caldwell and McCann, 1941). She returned to graduate school in Philadelphia, defending her dissertation in 1947, “Aboriginal Urn Burial in the Southeastern United States”. This same year she participated in several regional investigations including Dr. William Ritchie’s (1949) excavations at the Bell-Philhower site (28Sx29) and headed investigations at the Ware site (McCann, 1950) as a staff archaeologist at the New Jersey State Museum.

After 1957, Dr. McCann shifted her professional focus to sites in Bradford County, Pennsylvania following her appointment as curator at the Tioga Point Museum in Athens. Here she investigated the Wilson (36Br58) and Wells (36Br59) sites (McCann, 1962; Lucy and McCann, 1972) working closely with the Andaste Chapter of the SPA.

McCann also served as curator at The William Penn Memorial Museum during a time of transition between The State Museum of Pennsylvania’s original location in the Executive Office Building of the state Capital and its current location. Hired in the year of the new site’s groundbreaking in 1962 under Fred Kinsey and John Witthoft, McCann and other eventual staff curators Barry C. Kent, Ira F. Smith III and Vance Packard would be instrumental in the final design of the Hall of Anthropology. The gallery officially opened over a decade later, December 9th, 1975, after the museum opened its doors to the public in 1964 (Smith, 2005). She also co-edited and was a contributing author to Foundations of Pennsylvania Prehistory (McCann, 1971) during her tenure with the Commission, and received the J. Alden Mason award from the Society for Pennsylvania Archaeology shortly after retirement. She is pictured above holding the award decree with Dr. Barry Kent.

Dr. McCann continued to work with avocational archaeologists to publish SPA projects she had directed in previous years including a co-authored article with Charles Lucy on the Wells site (36Br59). She passed away in 1986 due to complications of multiple sclerosis.  Lucy, an avocational archaeologist, collaborator and friend, authored her memorial in the Pennsylvania Archaeologist (1989). Additional images of Dr. McCann in the field are available at the Tioga Point Museum in the Lucy Collection.

We hope you have enjoyed the last edition of Notable Women in Pennsylvania Archaeology for 2019. It was an honor to celebrate the contributions of four 20th century pioneers in the field — Frances Dorrance, Mary Butler, Verna Cowin, and Catherine McCann. We plan to intermittently continue the series in 2020.

From all of us at the Section of Archaeology, we wish you and yours a happy and healthy holiday season. Thank you for your continued support of our mission to preserve our past for our future in the new year.

For those who still have a hard-to-shop-for person on their holiday gift list, consider the latest volume in the Recent Research in Pennsylvania Archaeology series, The Susquehannocks: New Perspectives on Settlement and Cultural Identity, now on sale at a discounted price of $20.97 through the Pennsylvania State University Press. 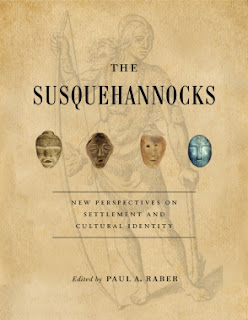 Browman, David L.
2013 Cultural Negotiations: The Role of Women in the Founding of Americanist Archaeology. Critical studies in the history of anthropology. University of Nebraska Press. Catherine J. McCann, (pp. 158-159).

1971 Notes on the pottery of the Clemson and Book Mounds. In Foundations of Pennsylvania Prehistory. Barry Kent, Ira Smith III, and Catherine McCann (editors), Anthropological Series No. 1, Pennsylvania Historical and Museum Commission.

1972 Some caches and so-called caches from eastern Pennsylvania. Pennsylvania Archaeologist 42(1-2:16-26).

Posted by Trails of History at 4:41 PM No comments: