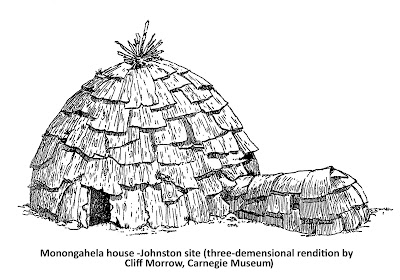 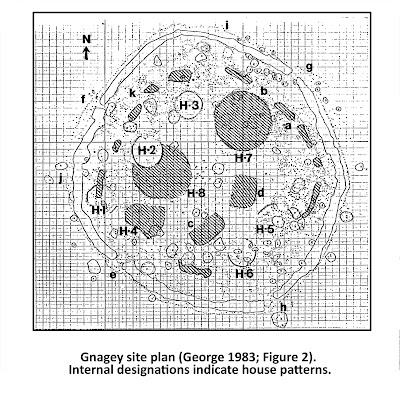 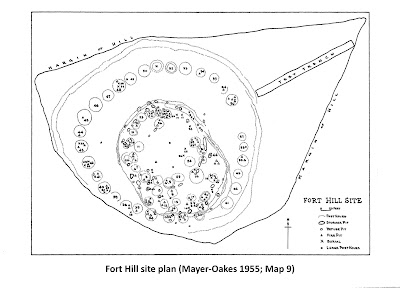 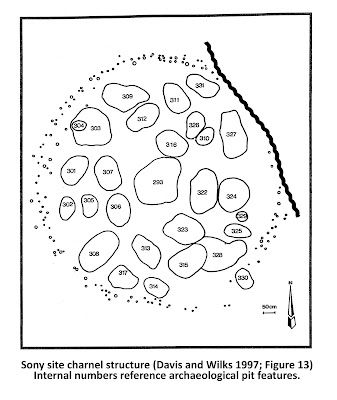 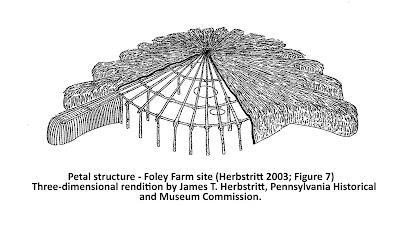 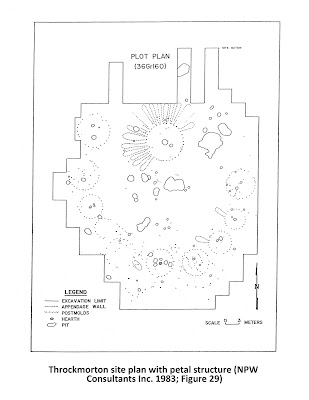 The Archaeology of Three Mile Island 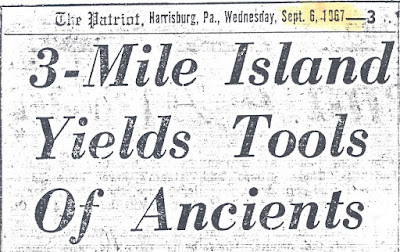 With Three Mile Island once again in the headlines as of late, what better time could there be than now to share some additional information about the archaeology of the island that hosts the nation’s most infamous nuclear power plant.

Residents of central Pennsylvania (of a certain age) can recall exactly where they were and what they were doing when they received word about fears of a meltdown at the plant in late March of 1979. Truly a “where were you?" moment in history outdone only by the disasters at Chernobyl and, more recently, Fukushima.

Avid followers of TWIPA will recall a previous post thoroughly reviewing the excavation and artifact analysis of the northern-most site on the island, 36Da50, and it can be found here. There have been, over the course of the last 50 years, eight additional archaeological sites registered on Three Mile Island.

First, enjoy a few newpaper clippings and the formal press release from that initial work conducted in 1967 that are now themselves as of this year technically, historic. 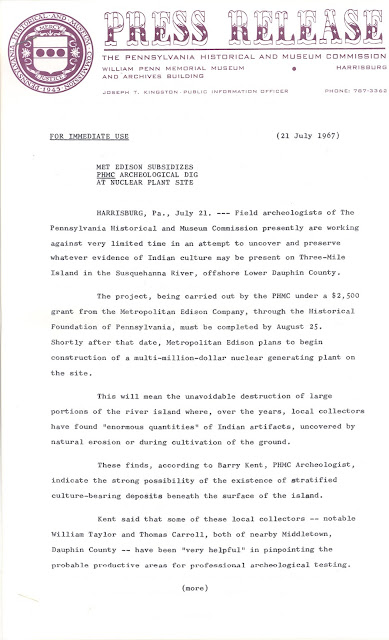 “The Metropolitan Edison Company in developing and creating the Three Mile Island complex made every effort to cooperate with concerned environmental and historical groups. Long before the establishment of State Offices of Historic Preservation or the need for Environmental Impact Statements, the Pennsylvania Historical and Museum Commission requested and received from the electric company a grant to examine prehistoric remains on the island and to obtain a sample sufficient to be able to reconstruct its culture history” (Smith 1977) 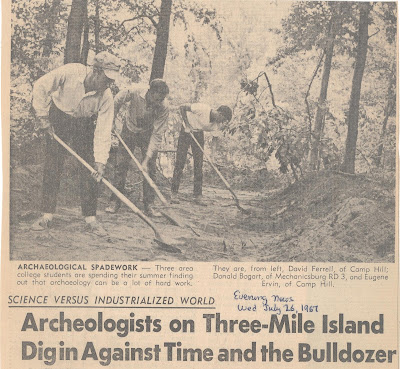 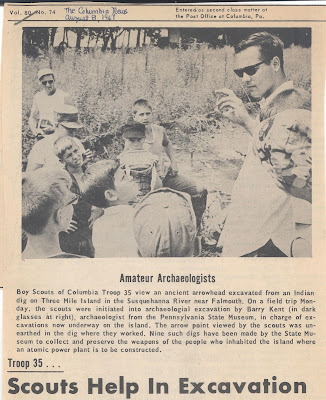 “The types and relative quantities of lithic artifacts, as well as, the horizontal distribution of ceramic artifacts suggests that Three Mile Island was occupied intermittently by small groups of Early and Middle Woodland peoples utilizing a local fish or animal resource.”(Smith 1977)

The Middle Woodland cord-marked storage vessel seen below was excavated, and ultimately donated by Monroe Brown to the State Museum where it was then reconstructed in the early 1970s. Assigned to site 36Da52, the provenience information indicates it was discovered eroding out of a pit on the southern bank of the island. Generous contributions like Mr. Brown’s go a long way in enhancing our collective understanding of Pennsylvania prehistory. 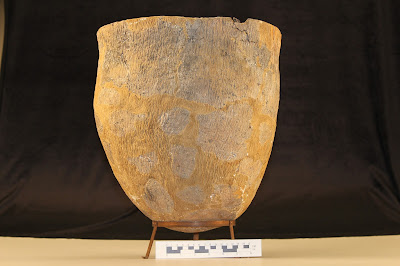 Sites 36Da96 through 36Da99 were recorded with the Pennsylvania Archaeological Site Survey in 1976 and are attributed to the work of Tom Grace and others. Mr. Grace worked at TMI as GPU Nuclear’s environmental licensing engineer, and for several years, as weather and time would permit, he would hunt for artifacts on undeveloped parcels of the island. His enthusiasm for archaeology and some of his discoveries were highlighted in the fall 1987 edition of GPU Nuclear Today, a periodical published for employees working at the plant and their families. His findings were consistent with earlier work and reinforced ideas about how long people had been occupying the island. 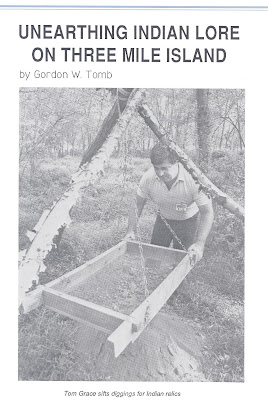 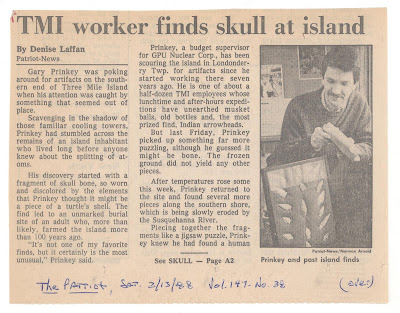 In the 1980s, another employee at TMI, Gary Prinkey, was also scouring the island for artifacts. On one excursion, he uncovered a fragment of a human skull eroding out of the bank of the island. Unsure whether the deceased was a victim of crime, Prinkey notified the State Police. State Museum of PA curator of archaeology Steve Warfel was contacted and investigated the grave site with Trooper John Brown in February of 1988.  The presence of wood fragments and cut nails indicated to Warfel the remnants of a coffin, dispelling any notion of nefarious deeds. Furthermore, vest buttons recovered from the site (36Da101) were identified as a particular type manufactured between 1850 and 1880. Likely an inhabitant farming TMI in the late19th century, their remains were re-interred further inland on the island after analysis. 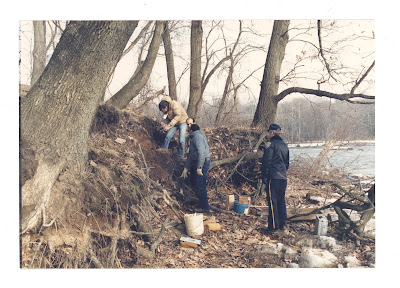 In the mid-nineties archaeologists re-identified site 36Da51, the second of three sites originally recorded in 1967, during survey and evaluation work in connection with a proposed fish passage facility on the southeastern side of the island. Phase II work determined that what was initially considered a buried A horizon containing chipping debris, a few sherds of Early/Middle Woodland ceramics and FCR was actually the historic plow zone from 19th century farming activities. The disturbed nature of the soils in the the project area precluded any additional archaeology.

Finally, the most recent archaeological investigations on TMI were conducted in 2014 in anticipation of a “Nature-like Fishway” construction project on the southwest side of the island. At this site, 36Da100, archaeologists observed stratified and sealed deposits, the earliest of which contained a Thebes projectile point made of jasper. Thebes projectile points are classified as Early Archaic in age and date between 10200 and 11700 years before the present. Due to its potential to contain significant new information, this site has been determined eligible to the National Register of Historic Places. If construction plans cannot be designed to avoid the site, a data recovery effort may be necessary to mitigate adverse effects the project may have on this important cultural resource.

For archaeologists, there’s just no such thing as TMI about TMI.

Warfel, Stephen G. (1988) A Report on the Discovery of a Human Skeleton at Three Mile Island, Dauphin County, PA. The State Museum of PA

For more information, visit PAarchaeology.state.pa.us or the Hall of Anthropology and Archaeology at The State Museum of Pennsylvania .
Posted by PA Archaeology at 11:05 AM No comments: