P is for Philadelphia 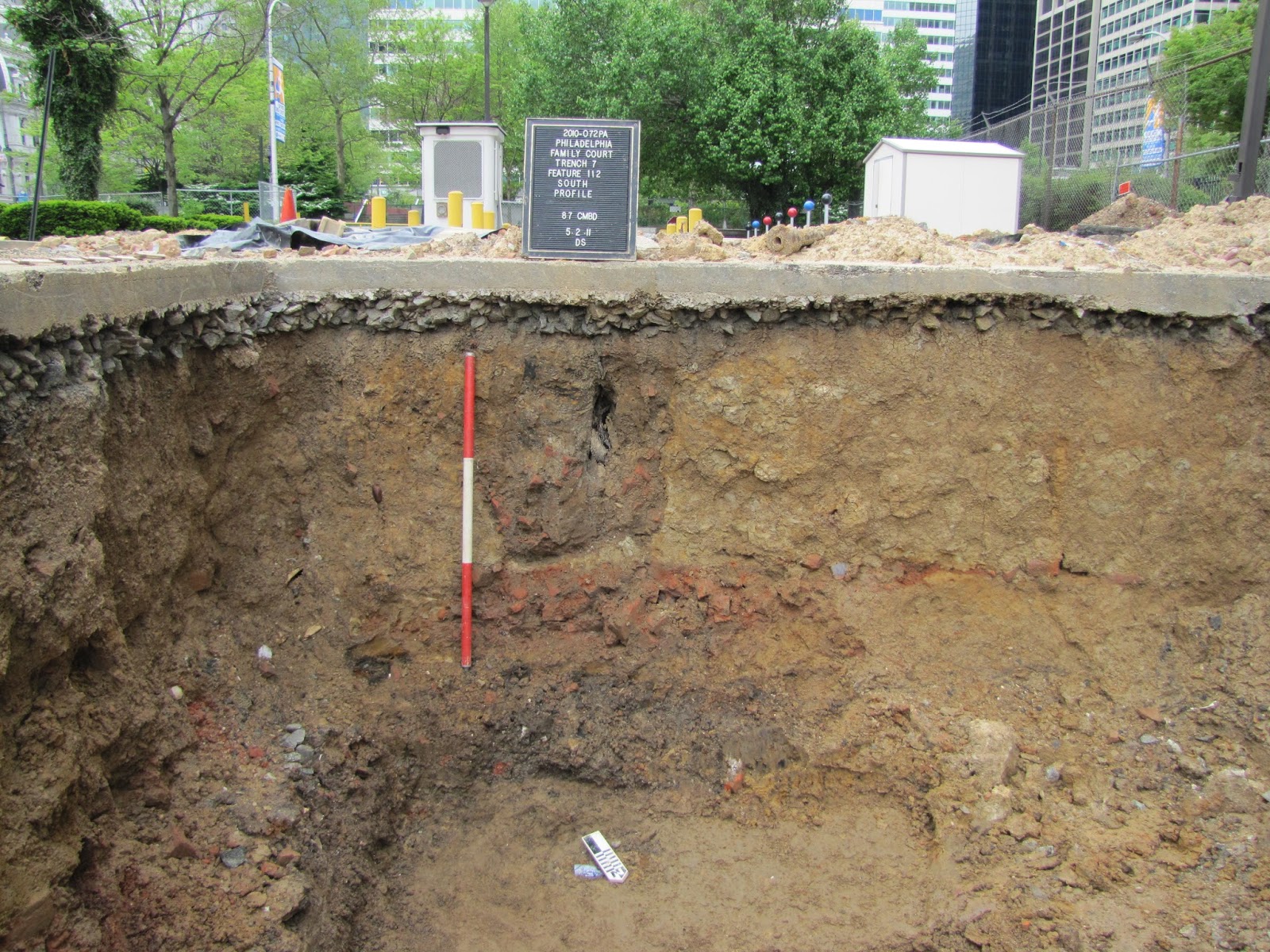 Continuing on the alphabetical trail of archaeology, this week TWIPA lands on the letter P. Since the conclusion of fieldwork at Fort Hunter this fall, the Section of Archaeology has been busy receiving a steady stream of cultural resource management collections from a variety of development projects including; Turnpike improvements, road realignments, bridge replacements, and a handful of natural gas pipelines. Another recent submission of artifacts to the museum is the result of a municipal office building project, and, for the purposes of this week’s post, is conveniently located in Philadelphia.

Philadelphia is no stranger to urban archaeology. From the National Park Service excavations in the 1950s for Independence Mall, to major transportation corridor projects of the 1970s and 1980s, and still more recent projects like the Metropolitan Detention Center and the National Constitution Center, a great deal of the city’s archaeological heritage has been documented for the benefit of all Pennsylvanians and the Nation at large. Indeed, no fewer than 64 registered archaeological sites, most of them historic domestic sites, have been identified within a one mile radius of this particular project (Gall, et al 2012). 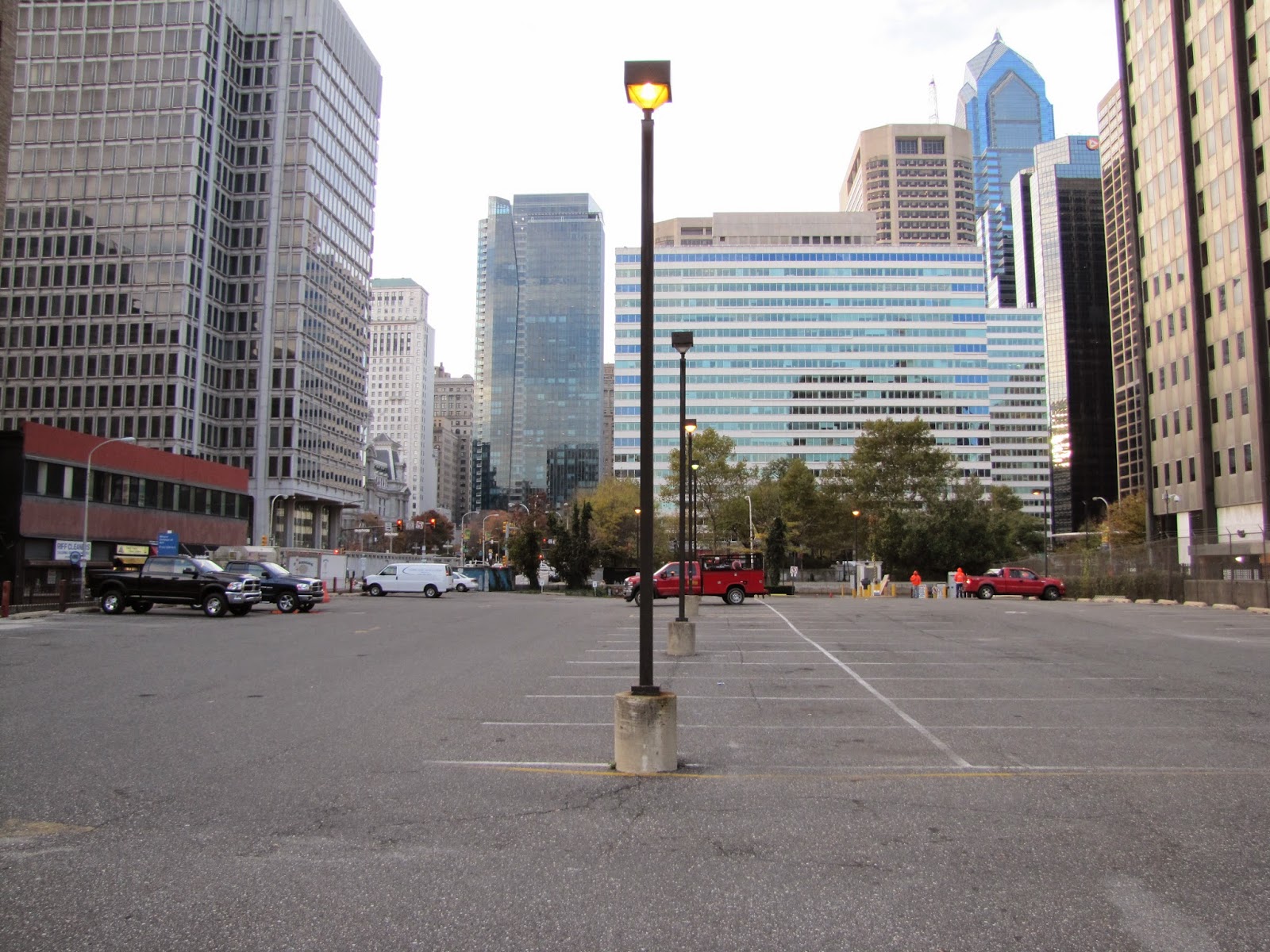 project area prior to excavation

In 2010, Richard Grubb & Associates Inc. was contracted to conduct an archaeological survey, evaluation and subsequent mitigation at the site of a new office building to be constructed for the City of Philadelphia’s Family Court House. Located on the northwest corner of 15th and Arch Streets, the project APE, or area of potential effects, was at the onset paved with asphalt and being used as a parking lot.

With the aid of historic fire insurance maps, portions of the project area were designated as having either high, medium, or low archaeological sensitivity, based on the presence or absence of basements of no longer extant buildings, and also areas where there is no record of any structures ever have being built. Accordingly, more resources were expended investigating areas identified as having high and medium sensitivity, although some sampling of low sensitivity areas took place as well. 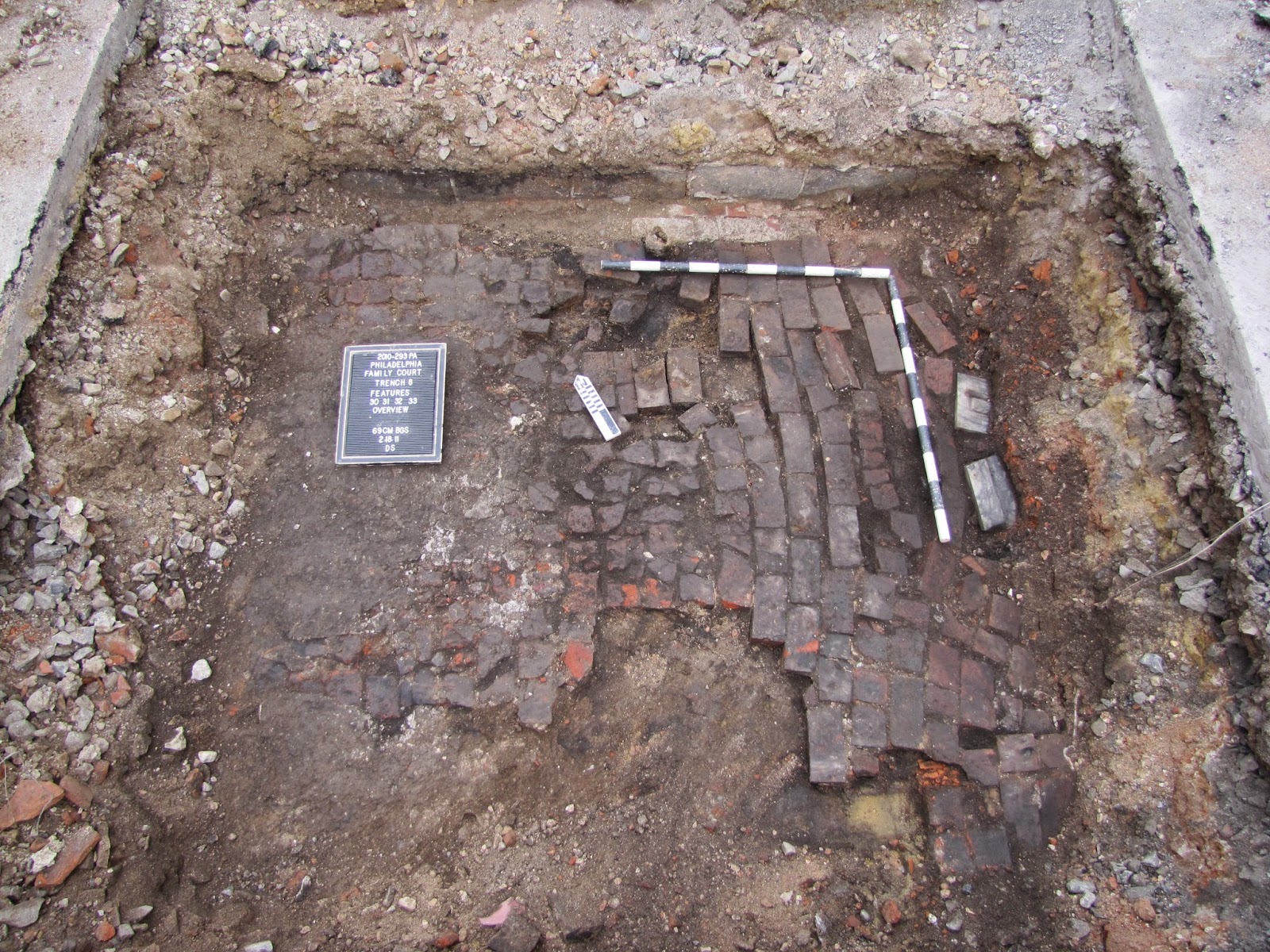 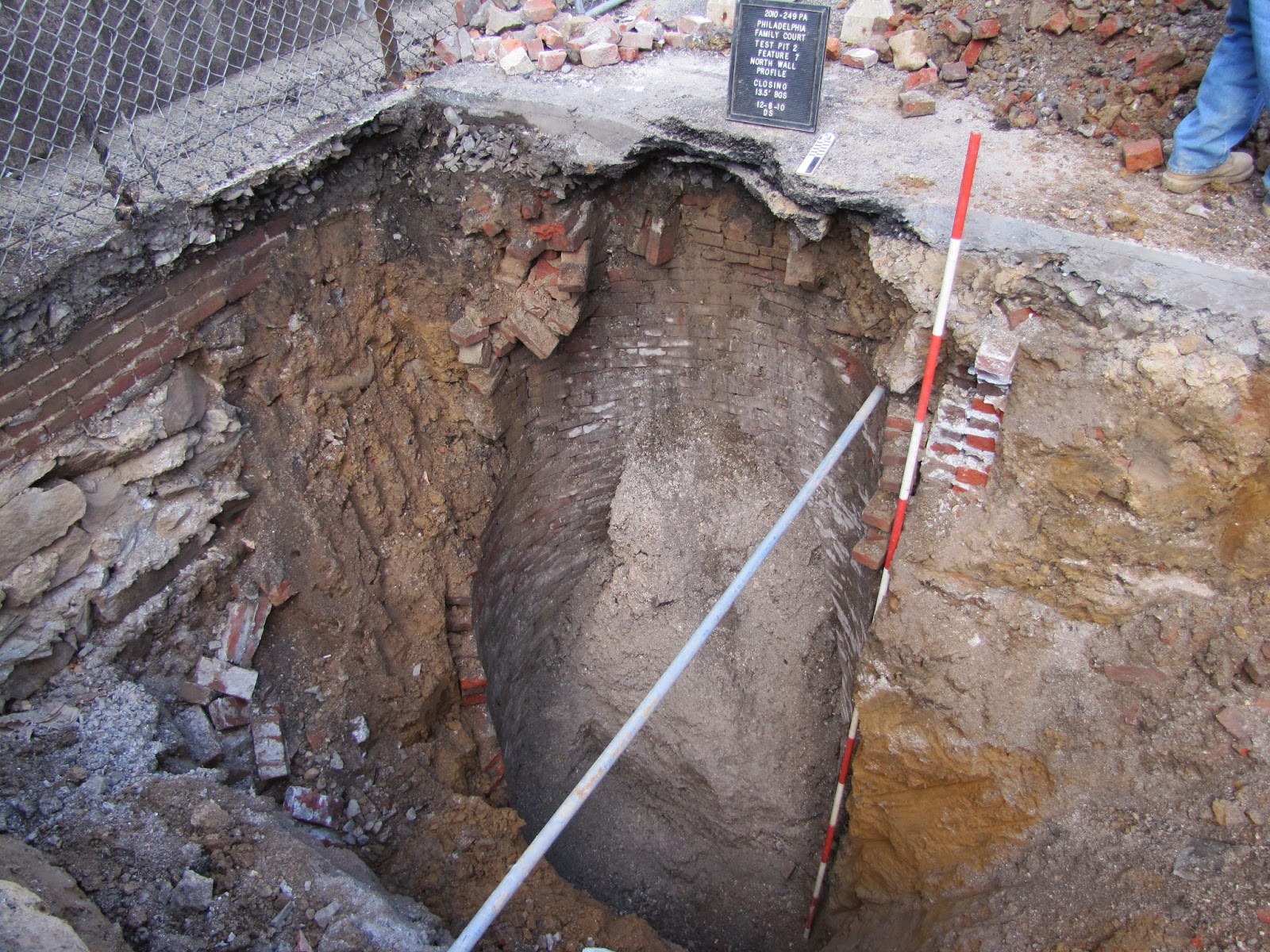 Trench excavations within the project area revealed a number of archaeological features that can be divided into two general categories. The first, are structural remains of former house lots dating from the early through middle 19th Century, and are represented by foundation walls, brick cellar floors, a fireplace, and shaft features including a well/cistern and brick lined privy. The second type of feature consist of the “buried A horizon” or the original historic ground surface containing slightly earlier late 18th through early 19th Century deposits along with associated sheet middens and refuse pits. 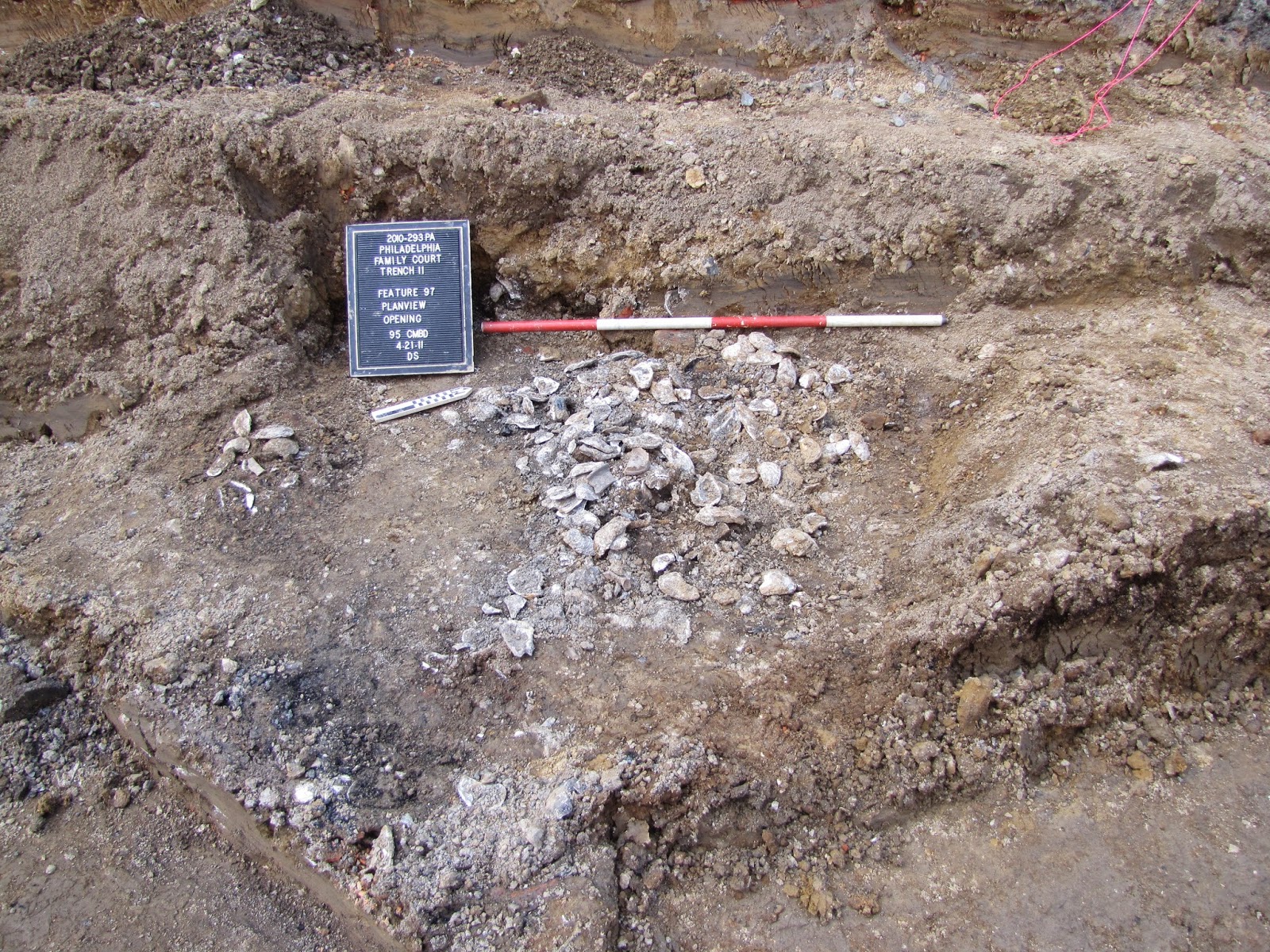 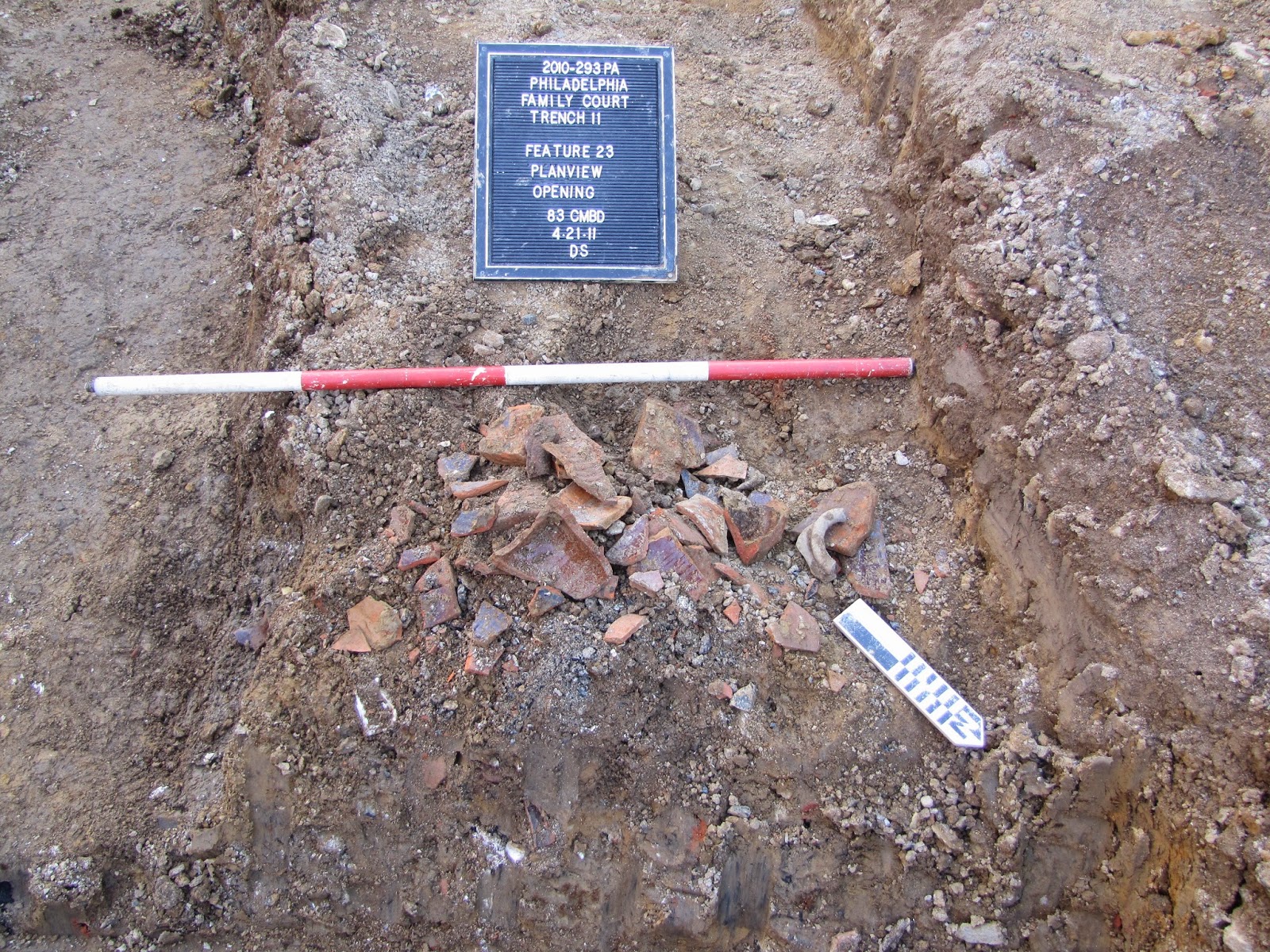 Of the over 35,000 artifacts recovered, nearly one half fall into the domestic category, including coarse and refined earthenware ceramics, glass tablewares and containers, and dietary animal bone. Another quarter of the finds consist of architectural debris such as large quantities brick and window glass, and lesser amounts of nails and roofing slate. Although the fewest in number, small finds and miscellaneous objects are often the most personal finds, and are therefore generally more interesting. Examples from the site include a honey colored gun flint, a bone toothbrush fragment, an assortment of buttons and pins, and clay tobacco pipe fragments. 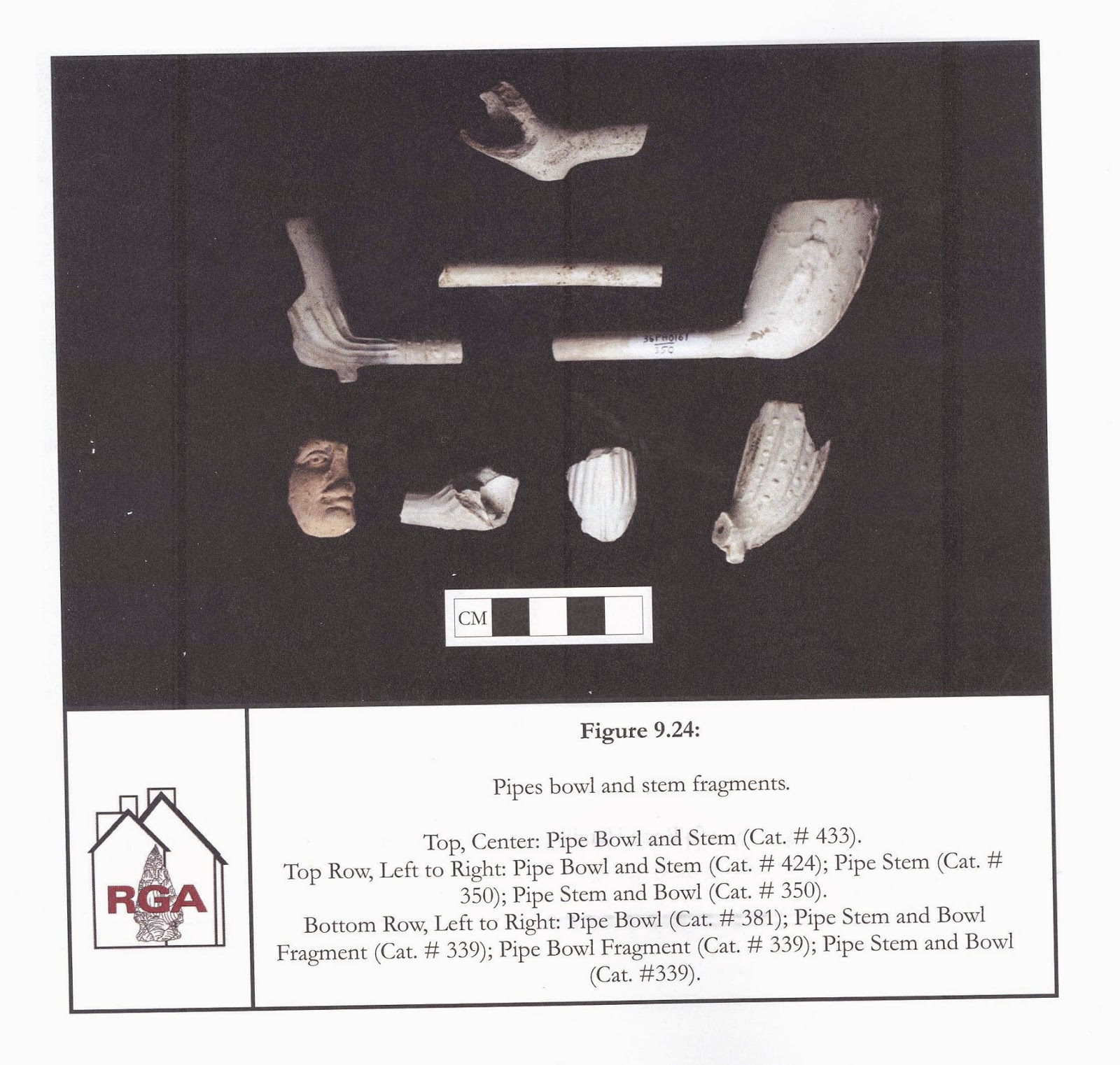 Detailed review of the available historic documentation such as tax records, deed transfers and population census data was critical in enabling the archaeologists to reconnect the recovered artifacts to specific family groups of differing socio-economic status during the 1780s through the 1840s. The project area underwent drastic changes throughout its history, from pastoral land on the edge of the growing colonial city in the late 18th Century to residential and ultimately commercial use of the area through the late 19th and early 20th centuries.

The archaeological excavation conducted for the Philadelphia Family Court House site and the analysis of the artifacts recovered offer a unique window into the changing lifestyles and consumption patterns of the inhabitants of this section of the city over time, and of the changing landscape of the city itself.

For more information, visit PAarchaeology.state.pa.us or the Hall of Anthropology and Archaeology at The State Museum of Pennsylvania .
Posted by PA Archaeology at 4:21 PM No comments:

The Long Arm of Archaeology - Outreach

out·reach:  the activity or process of bringing information or services to people

Outreach, as defined by Webster’s Dictionary, is an important component to archaeology and one that we embrace fully here at The State Museum.  Museums are considered educational institutions and one of our primary goals is to share archaeology with the public in a format that is clear and informative.  If you have not visited the Anthropology and Archaeology gallery at the museum, or if it’s been a while, we invite you to come and learn about our rich archaeological heritage in Pennsylvania.

Archaeologists have long involved the public in their work.  In fact, archaeology in its early years largely consisted of enthusiastic, energetic, and knowledgeable members of the general public with a keen interest and passion about the past—a passion they readily shared with their local communities.  Today, these knowledgeable individuals—who today we call avocationals—are still very much with us, even as archaeology has become more professionalized to meet the requirements of state and federal laws regarding the remains of past peoples.  The word “outreach” is included in many of the agreements that federal agencies enter into before starting a construction project, and this outreach is a part of the archaeological studies that precede actual construction of highways, sewage treatment facilities or development projects. 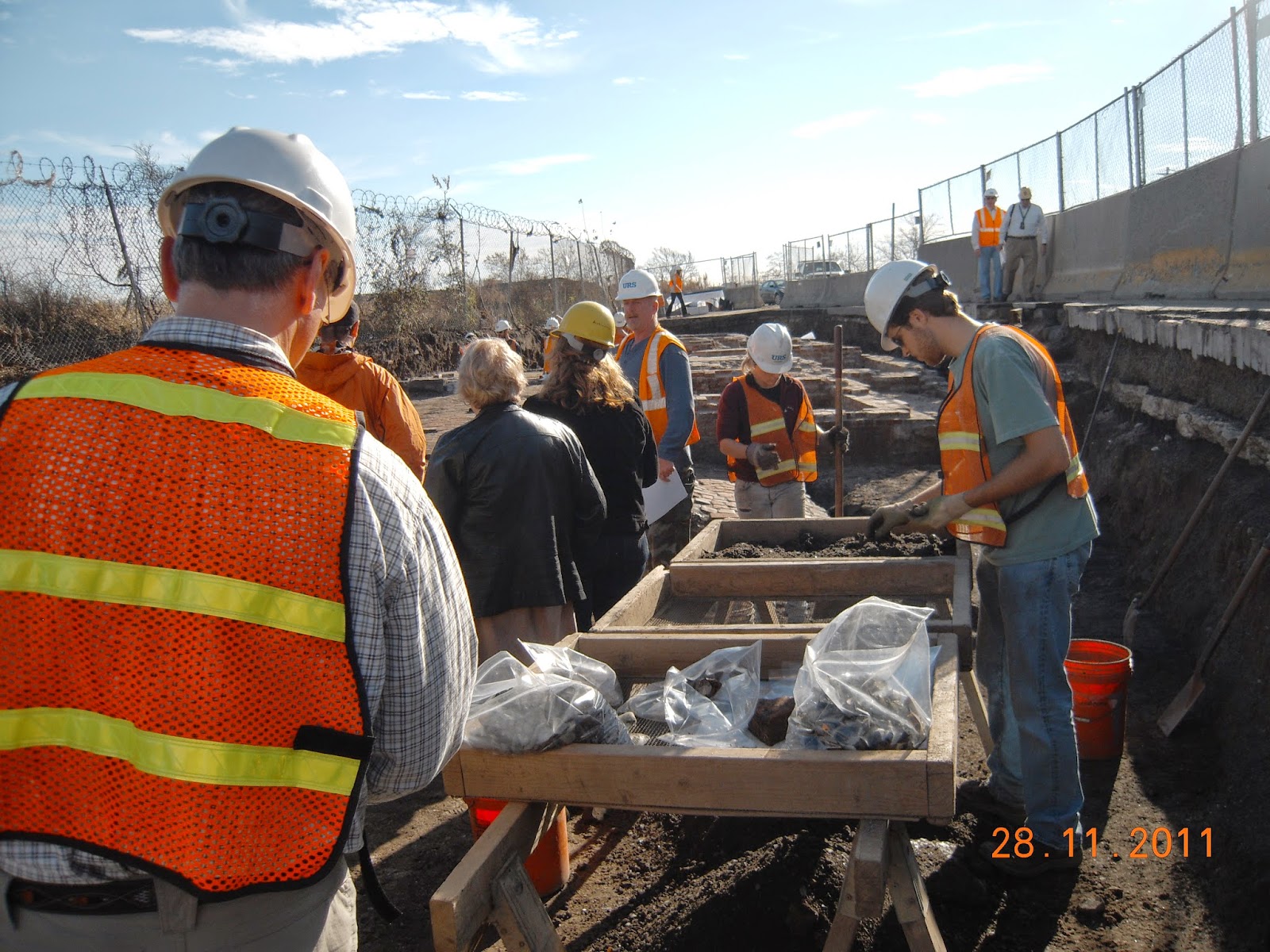 archaeologist at work ahead of a highway expansion project

Archaeologists recognize that their outreach efforts are key to communicating with the general public as to why archaeology is done prior to construction in the first place.  Outreach efforts help tie communities today with those that preceded them, giving them a sense of  local heritage—a heritage that in some places goes back thousands of years with the American Indians that first inhabited Pennsylvania and continues through European colonization and the establishment of the United States. 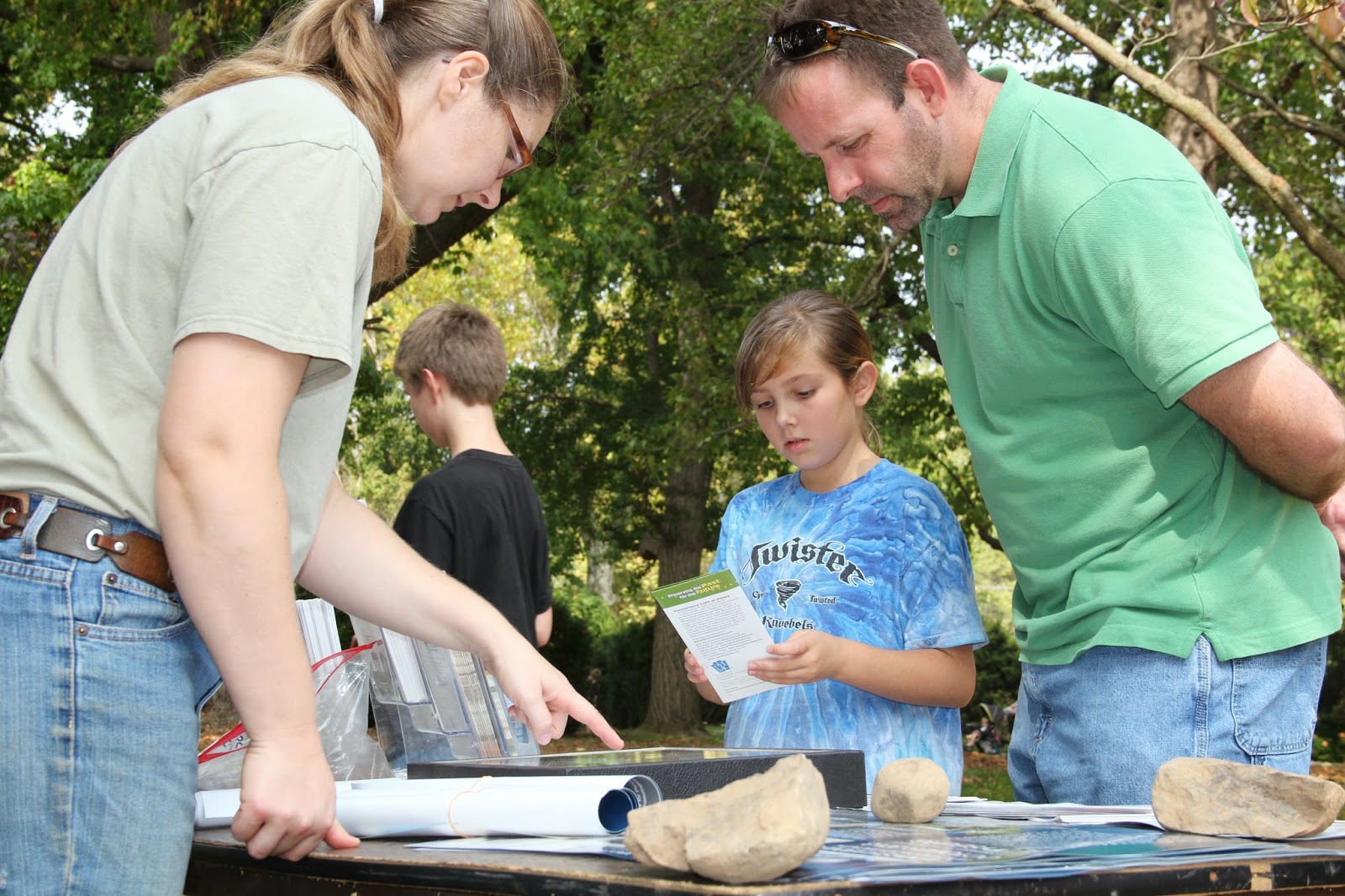 archaeology display during the Kipona festival in Harrisburg 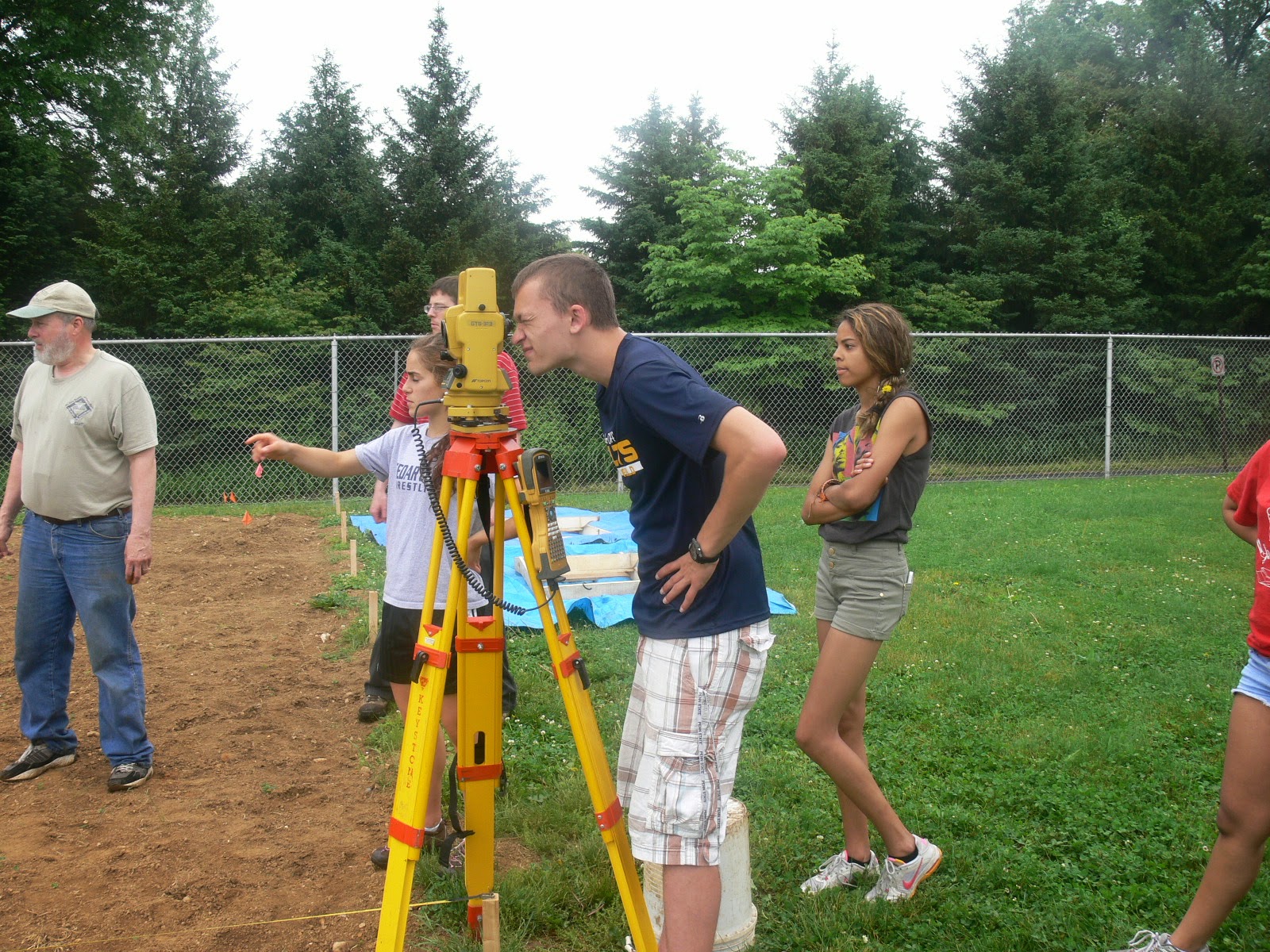 The forms that outreach can take are quite diverse.  This blog, itself, is an outreach tool, but archaeologists also give lectures to the general public, run workshops that allow people to touch actual objects from the past and meet with those who do archaeology for a living. Many of these public programs are conducted during active archaeological investigations. 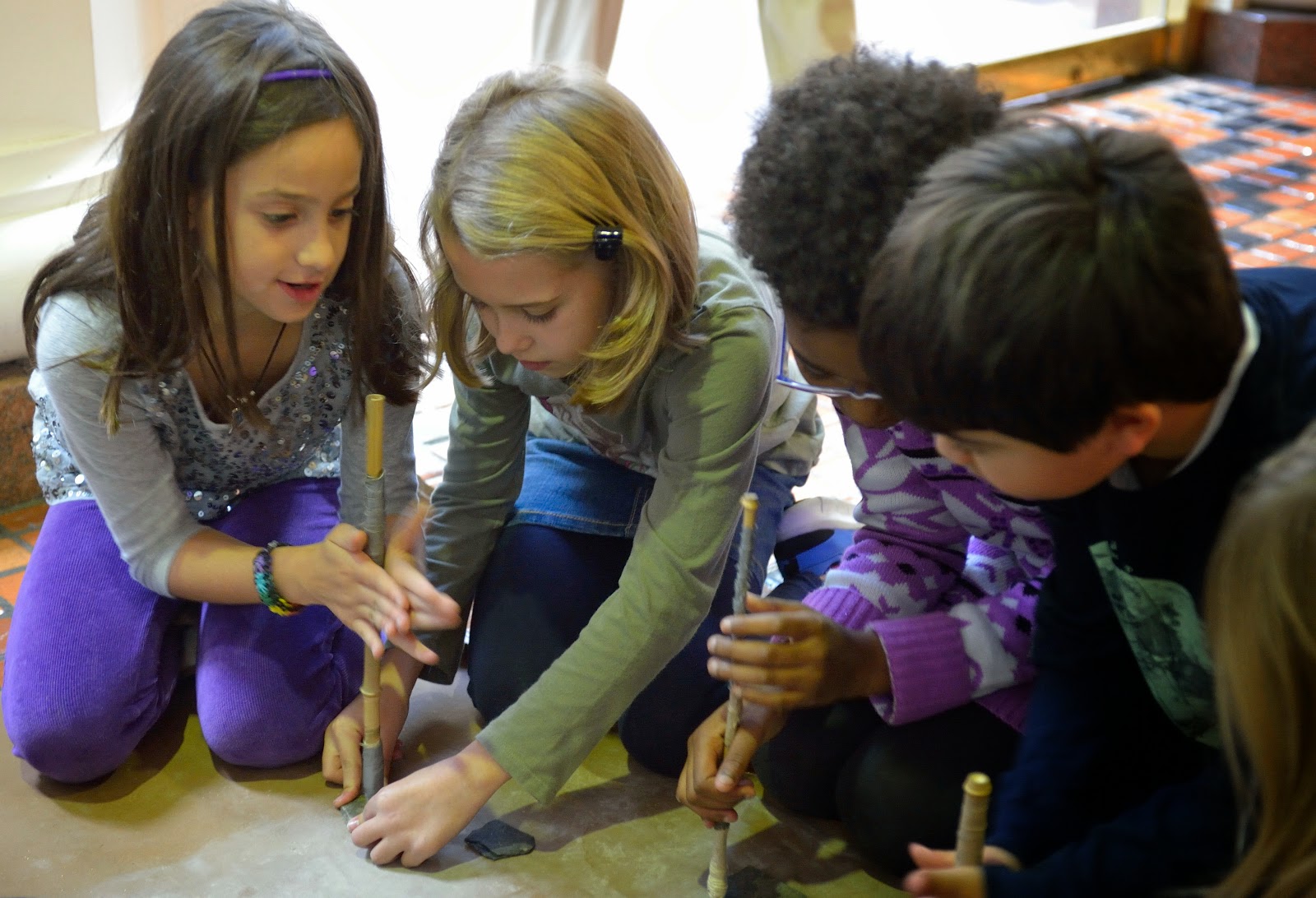 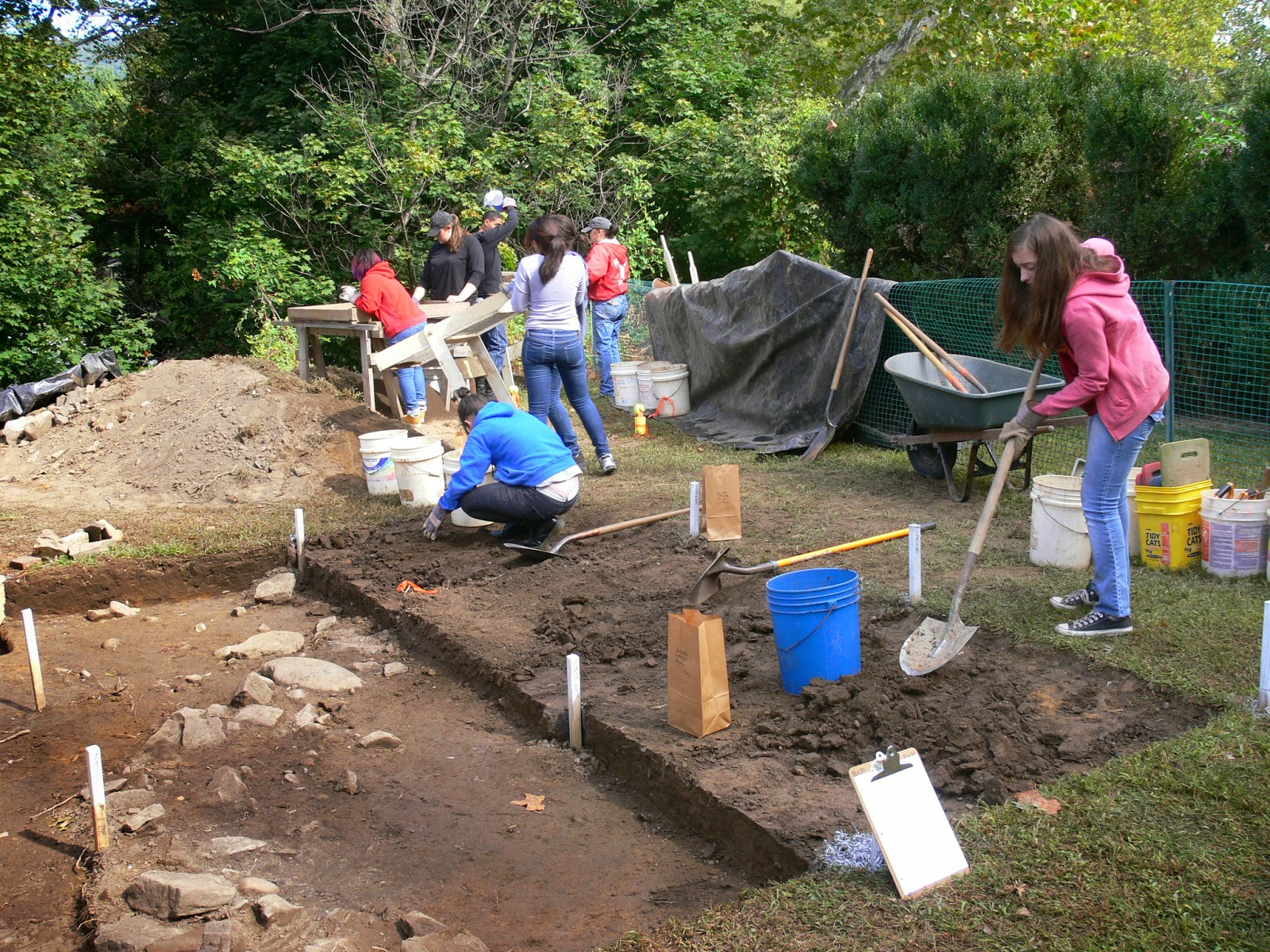 Archaeological outreach can start with very young individuals, and many archaeologists work with teachers on the k-12 level.  Archaeological outreach also harnesses the latest technology.  Some archaeologists are using laser scanners to create 3D models of artifacts, for example, that can be printed in 3D by anyone, even from the comfort of their own homes.  Digital archaeology, in one form or another, enables people from across the world to join together and appreciate Pennsylvania’s cultural heritage in a global context. Lunch and Learn program at the State Museum of Pennsylvania

The Section of Archaeology often features many of these outreach programs in our blog and an important event will take place tomorrow, November 8, 2014,  with our Workshops in Archaeology program.  The focus of this year’s program is Climate Change and the Archaeological Record.  Many noted professionals will be presenting their research for the general public to understand how we examine the past to look for evidence of culture change, often tied to climate change. Walk-ins are welcome! 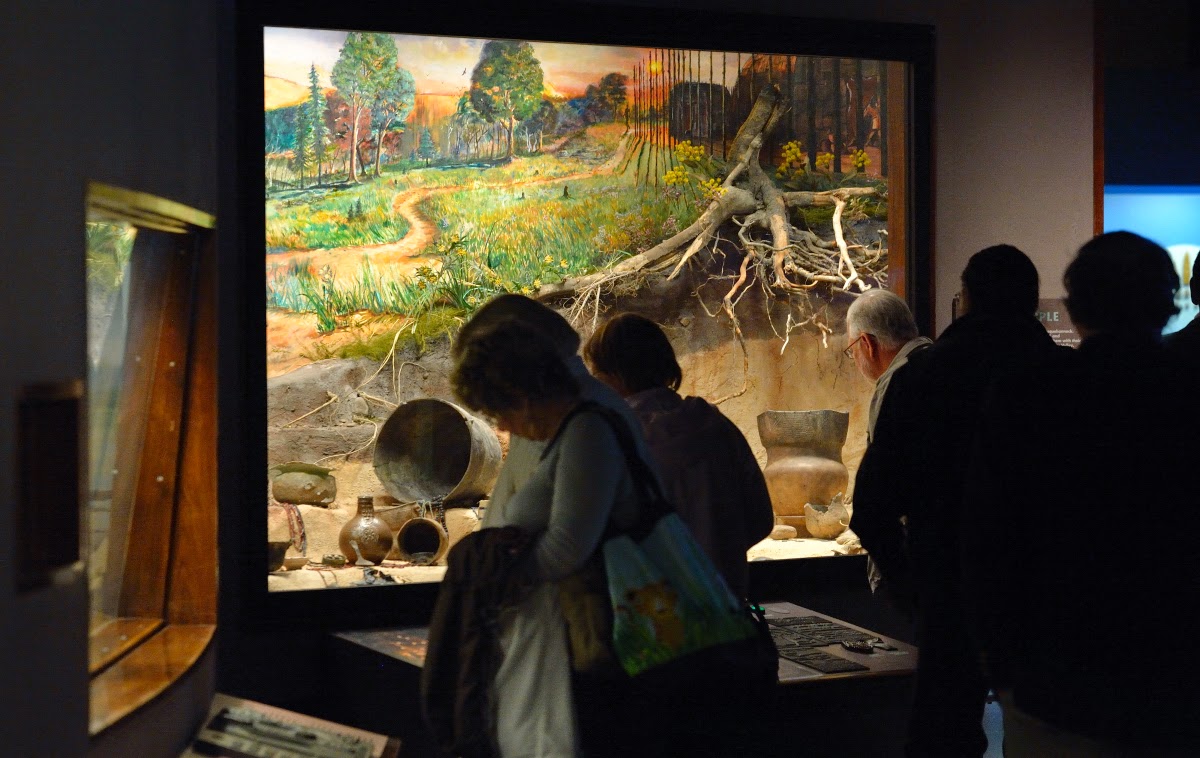 We hope you have enjoyed this glimpse into the daily activities of our department and invite you to visit us at our programs throughout the year as we work to bring archaeology into our communities.

For more information, visit PAarchaeology.state.pa.us or the Hall of Anthropology and Archaeology at The State Museum of Pennsylvania .
Posted by PA Archaeology at 3:45 PM No comments: