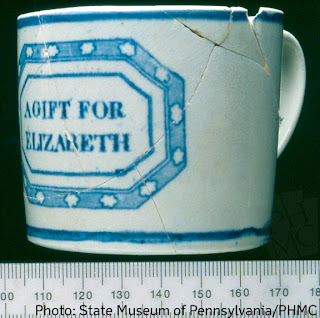 Louis Berger and Associates, Inc. discovered this pearlware child’s mug during the excavation of Feature 19, for the Metropolitan Detention Center (36Ph91). Feature 19 is a brick lined shaft located at the rear of 702 Arch Street, possibly the remains of a privy.

The available census records place Charles Clayton and his family at 700/702 Arch Street from 1804 until 1818. Artifact dates from this feature suggest that the Clayton household was responsible for its fill. In 1810 theses same records list the occupants of the Clayton household as Charles, his wife Eleanor, three girls, one boy and five men. Unfortunately the records do not list the first names of the Clayton children but it is believed that the mug may have been a gift for one of the daughters. During the early nineteenth century there was an increase in the production of ceramic items specifically manufactured for the children of the more affluent middle class.

For more information, visit PAarchaeology.state.pa.us or the Hall of Anthropology and Archaeology at The State Museum of Pennsylvania .
Posted by PA Archaeology at 3:50 PM 1 comment: 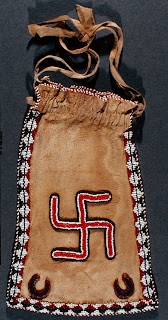 This leather pipe bag was collected by Frank Speck in 1929 on the reservation of the Oklahoma Delaware Indians. The bag was used for carrying pipes and tobaccos. Individual designs vary from geometric to floral designs. Native groups utilize many geometric designs in their basketry and pottery, as well as beadwork. One of the obvious reasons for the repeated use of this symbol throughout time is the simple shape which lends itself to repetition. The “swastika” design has been repeated throughout time in many cultural groups and did not become recognized as a symbol of Nazism until 1920 when it was adopted by Adolph Hitler. To view additional objects collected by Speck please visit the Anthropology and Archaeology Gallery at The State Museum of Pennsylvania.
For more information, visit PAarchaeology.state.pa.us or the Hall of Anthropology and Archaeology at The State Museum of Pennsylvania .
Posted by PA Archaeology at 4:26 PM No comments:

Highlights of the Anthropology and Archaeology Gallery at the State Museum 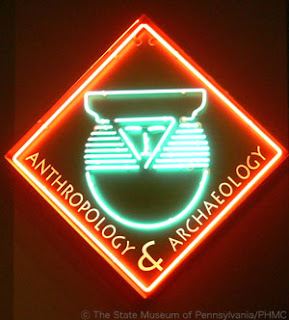 Looking for an adventure that’s fun, fascinating AND free? Check out the State Museum of PA in downtown Harrisburg at 3rd and Forester Streets, right next to the State Capitol. Of particular note is the Hall of Anthropology and Archaeology located on the second floor. From hunter-gatherers of the last Ice Age to the Valley Forge encampment of the American Revolution, the exhibits and dioramas in this gallery explore over 10,000 years of cultural heritage that has been unearthed through archaeological excavations conducted throughout the state.

Ever wonder how archaeologists excavate a site? See how sites are uncovered at the recreated open excavation and stratified rock shelter exhibits.

Just how does someone chip a piece of stone into an arrow head or make a dugout canoe without metal tools? Find out in the technology area.

Trace the progression of culture through time and adaptations to a changing environment in the culture history section. Take the opportunity to touch real petroglyphs and discover where they were found.

What did a 16th Century Native American village look like? Walk through a recreated Delaware Indian longhouse as you follow the life of Namakwa and see how their culture differs from ours.

Why you should go:
1. Pennsylvania cares about history, and built this museum for YOU.
2. Learning about history is COOL!
3. Did I mention it’s FREE?
No time for a road trip - no problem, check out the virtual tour of the Archaeology Gallery right now!
For more information, visit PAarchaeology.state.pa.us or the Hall of Anthropology and Archaeology at The State Museum of Pennsylvania .
Posted by PA Archaeology at 4:04 PM No comments: 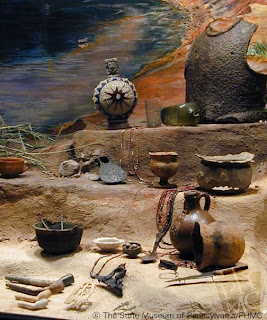 The Byrd and Oscar Leibhart sites have finally been placed in hands that will ensure protection from residential development. These two sites represent some of the last major villages inhabited by the Susquehannock Indians.

The Susquehannocks were the major Native American tribe in the lower Susquehanna Valley at the time of European contact. They controlled the fur trade in the region until about 1670. At that time they occupied the Oscar Leibhart site in York County. They briefly left here for Maryland in 1674 and returned in 1675 to occupy the nearby Byrd Leibhart site.
Several earlier Susquehannock villages have been archaeologically tested and they document over 100 years of cultural change, as the Susquehannocks gradually became the dominant Indian tribe, trading with the Europeans. Their collapse came during the 1670s due to disease, conflicts with neighboring tribes and conflicts with the Europeans.
These sites are incredibly significant because they represent some of the final occupations of this once great economic power. They dramatically illustrate the rapid cultural changes that occurred as a result of European contact. In January the Byrd Leibhart Site joined the Oscar Leibhart Site in the National Register of Historic Places.
For more information on the Susquehannocks, visit our PA Archaeology site or the Hall of Anthropology and Archaeology at The State Museum of Pennsylvania. The best synthesis of the Susquehannocks can be found in Susquehanna's Indians by Barry C. Kent. This is published by the Pennsylvania Historical and Museum Commission and it is available at the State Bookstore (http://www.pabookstore.com/) Information on the process of preserving sites can be found in the Fall issue of American Archaeology.
Posted by PA Archaeology at 2:51 PM 2 comments: