With many of us enjoying our summer vacation at the beach, it seems appropriate to explore the use of shell by the Indigenous peoples who occupied these lands before colonization. Native Americans utilized many natural materials such as bone, clay and stone in the course of day-to-day life prior to the arrival of Europeans.  Shell was used for utilitarian, ceremonial, and ornamental purposes at least as far back as the Archaic Period (4,300-10,00 years ago) and probably further, but the organic nature of shell in the humid climate of eastern North America does not always allow for good preservation.

The shell artifacts most commonly discussed in literature are wampum.  Wampum and wampum belts are often associated with trade between native groups and native groups and colonials.  Originally, wampum was created from a specific type of shell bead that is seldom found prior to European arrival because their manufacture required using a small metal drill that was unavailable prior to European trade. These shell beads were drilled from the quahog clam shell and welk shells likely traded in the Chesapeake Bay.  Because they were difficult to make, quantities of individual beads were used in trade and exchange. Wampum belts served to memorialize events and as pneumonic devices when giving a speech at a council meeting , for example, or when delivering a message. The various colors were assigned specific values and meanings and were used individually as strands or collectively in patterned belts resulting in beautiful designs. However, by the late 1600s, glass beads began to replace the shell. Wampum belts using glass beads continued to be used to memorialize or document treaties and other important events between Indigenous groups and colonial governments.

It is an interesting example of human ingenuity during a time of enormous change.  Two vastly different worlds were coming together, the Old World and the New, and people found a way to capitalize on each other’s interests and needs.  If you are interested in more information, please look at the following references and as always thank you for your interest in Pennsylvania’s past.

For more information, visit PAarchaeology.state.pa.us or the Hall of Anthropology and Archaeology at The State Museum of Pennsylvania .
Posted by Trails of History at 11:51 AM No comments:

Pots from the Past - Late Woodland Pottery – Upper Ohio Valley 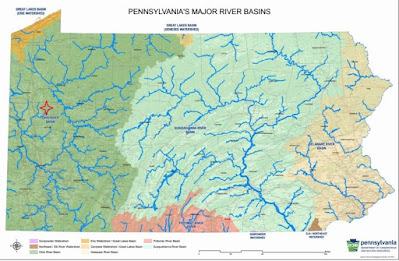 In this installment of This week in Pennsylvania Archaeology (TWIPA), we are going to examine Late Woodland pottery from four site locations in the Upper Ohio Valley of western Pennsylvania and West Virginia dating AD. 400 to 900/1100. This is a poorly known period dating prior to the development of palisaded Monongahela and Fort Ancient village sites that dominated the region after AD. 1100.  Habitation sites from the Late Woodland period are found on river terraces including mound sites. Smaller, less intensively occupied sites in the uplands likely functioned as hunting and gathering places  for obtaining consumable resources and the quarrying of chert and other hard stone that is not readily available in the main river valleys. These kinds of materials were principally used by Late Woodland groups to make cutting and grinding tools that included corner notched arrowheads, knives, celts and milling stones. In contrast, clay, the principal material component for making pottery, was essentially everywhere and easily quarried from riverbanks and slack water wetlands where the soils are conducive to fine, close grained sedimentation. Late Woodland sites along major waterways were often situated close to these high-quality clay sources. Many centuries later, during the latter part of the 19th century some of these clays from the Monongahela Valley were mined for their ceramic qualities as mentioned in our last TWIPA blog post on stoneware pottery.

Only a  few complete or nearly complete Late Woodland pottery vessels from the Upper Ohio Valley have been reported. The best examples, come from the Watson Farm site (46HK34) Hancock County, West Virginia, the Ohioview site (36BV9) Beaver County, Pennsylvania, and the Edinburg site (36LR3) Lawrence County, Pennsylvania. All, to some degree, have been reconstructed from broken pottery fragments uncovered from archaeological excavations.

The Watson Farm vessel is an example of a partial reconstruction showing the rim, neck, and shoulder of the upper half of the pot. It is a collarless vessel that is tempered with coarsely crushed limestone as is most pottery from the site. Bold vertically emplaced cordmarkings on the rim and neck abruptly change to an oblique pattern of cordmarkings on the shoulder, and upper part of the body. This pot form is believed to have served as a utilitarian storage/cooking container and is typed as Watson Cordmarked (Dragoo 1956).

The Ohioview site vessel is the reconstruction of an entire vessel. It is also a collarless form showing vertical to slightly oblique cordmarkings extending from the rim to the bottom of the sub-globular base. The temper is a medium to fine crushed igneous rock and at some places on the surface the temper is exposed that shows a dark brown to a white color. Other rimsherds from the site have a short collar strip molded onto the rim of pots demonstrating that vessels with this applied collar treatment were also common.  Identified by the placement of parallel oblique or opposed oblique cord impressed decorations are, also observed as a pattern on the pottery type Jacks Reef Corded Collar (Johnson and Myers 2004; Lantz and Johnson 2020: Figure 12.6). The collarless and collared pots with their elongated bodies were utilitarian forms also known regionally in the Upper Ohio Valley as Mahoning Cordmarked (Mayer-Oakes 1955).

The Edinburg site vessel is also a complete reconstruction. Like the Ohioview site vessel, it is collarless with boldly emplaced cordmarkings running vertically down the exterior of the rim and neck then obliquely onto the shoulder terminating in an all over criss-cross pattern on an elongated sub-conical body. Again, the temper is of a fine to medium coarse grained igneous rock. Some of the other rimsherds from the site exhibit crushed limestone as the principal temper type.  Many of these rimsherds have parallel oblique and opposed oblique cord impressions on an added-on collar rim strip containing cord impressions stamped into the lip. Lip decorations are also present at the Ohioview site and at other Late Woodland habitation sites in the Central Allegheny/Beaver River valley. In addition, there are examples from Edinburg that are decorated with a series of parallel horizontal cord impressions encircling the necks of some vessels. Considered a container for food consumption and/or storage, the Edinburg site vessel is typed as Mahoning Cordmarked (Gartley, Carskadden and Morton 2016).

Late Woodland vessels from the Upper Ohio Valley are remarkably similar in size, shape and cordmarked surface treatment. When present, these attributes, along with the inclusion of the simple cordwrapped stick decorations on collarless and collared vessels are distinct hallmarks. The attributes were widely embraced and represent a ceramic tradition that was shared by groups throughout the Upper Ohio Valley between ca. AD. 400-1000.

Archaeologists examine the varieties of pottery recovered from excavations as a tool to identify the culture groups who created them. The Late Woodland was a fascinating period of social organization and change for indigenous peoples who occupied our pre-Commonwealth borders. Our ability to identify these various culture groups stems from decades of research and comparison of thousands of broken pottery sherds to identify these distinct pottery types, which are important in helping us to understand the activities of the potters who made them.   Understanding past human behavior, is important in preparing for the future, and our ability to adapt and change.

We hope that you have enjoyed this brief introduction into Upper Ohio Valley Late Woodland pottery. Future TWIPA blog posts will present more on the topic of Pre-Contact period  pottery of the Upper Ohio Valley and other regions of Pennsylvania where they are found.

For more information, visit PAarchaeology.state.pa.us or the Hall of Anthropology and Archaeology at The State Museum of Pennsylvania .
Posted by Trails of History at 1:23 PM No comments: