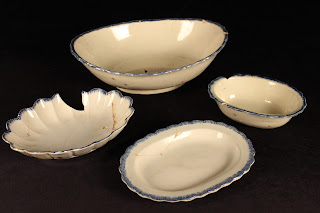 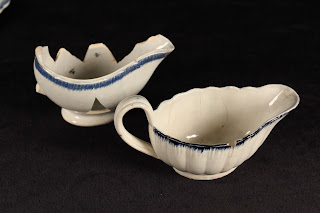 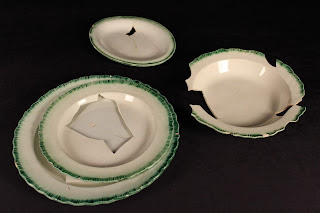 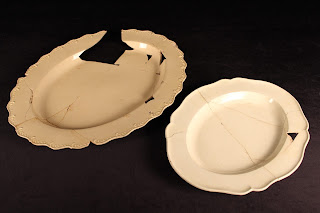 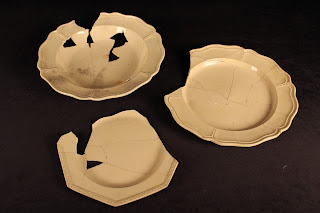 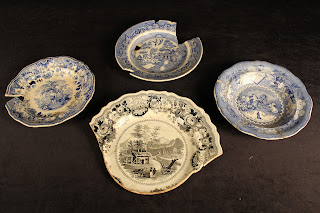 For more information, visit PAarchaeology.state.pa.us or the Hall of Anthropology and Archaeology at The State Museum of Pennsylvania .
Posted by PA Archaeology at 2:45 PM No comments:

As many of you may know, we recently held or annual Workshops in Archaeology on October 28, 2017.  This year’s theme was Ethnicity in the Archaeological Record; and although attendance was a little lighter than usual, the papers presented and the discussions provoked were as interesting as ever.

The day began with the Director of The State Museum of Pennsylvania, Beth Hager, welcoming everyone to the museum and generally setting the stage for this year’s installment of our workshops program.  Dr. Kurt Carr briefly introduced the topic of the day and was followed by our first presenter, Keith Heinrich of Pennsylvania’s State Historic Preservation Office (SHPO). 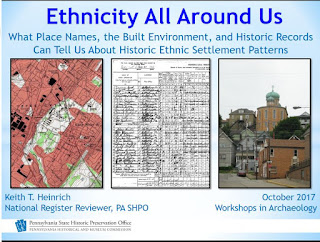 Keith suggested that in some cases (not all) place names can be an indicator of ethnicity.  He discussed two examples, Germantown in Philadelphia and Polish Hill in Pittsburgh.  Being an architectural historian, he was also able to describe structural clues to ethnicity. 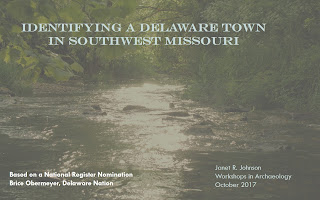 The second presentation of the morning was scheduled to be Brice Obermeyer of the Delaware Nation who unfortunately was unable to join us.  Nothing daunted, our own Janet Johnson was able to collaborate with Mr. Obermeyer and deliver an interesting paper identifying a Delaware village in Missouri.  Janet drew comparisons between Delaware sites in Pennsylvania using clues such as personal ornaments (silver adornments, glass beads, brass points & cones…) as well as structural similarities in log cabin construction. 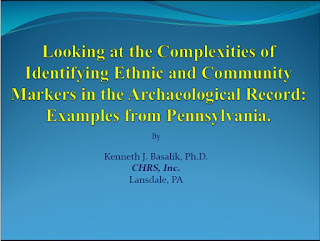 Session three was delivered by Ken Basalik from Cultural Heritage Research Services, Inc. (CHRS).  Ken delivered a cautionary summation of several historic sites in Pennsylvania acknowledging the difficulty of defining an ethnic group through both time and space.  In some examples, physical alterations of structures through time were enough to disguise what could have been ethnic attributes.  In other instances, the artifacts recovered alluded to one group or another with varying degrees of accuracy.  Concluding with the idea that in some cases, structures and artifacts may offer clues but the best way of deciphering ethnicity was historical documentation and the personal accounts of those that lived there, if available. 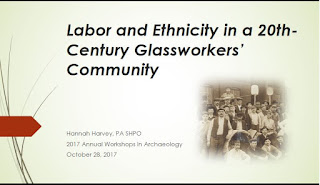 The fourth session of the morning was presented by Hannah Harvey, Pennsylvania’s State Historic Preservation Office (SHPO).  Her research was devoted exclusively to the company housing associated with the early 20th century Columbia Plate Glass Company near Blairsville in Indiana county.  Using documentation, predominantly census records, she was successful in “mapping the social geography of the community”. 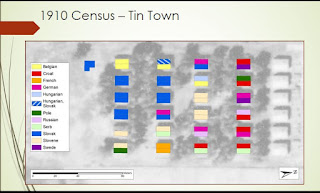 Although she too found it difficult to corroborate ethnicity via excavation. 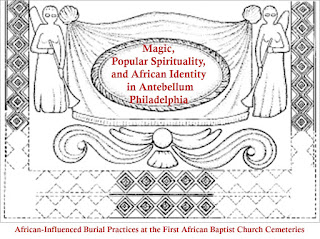 John P. McCarthy, Cultural Preservation Specialist with the Delaware Division of Parks and Recreation, delivered the fifth paper, a discussion of burial practices at two early 19th century African American cemeteries in Philadelphia.  In several of the burials common yet unusual grave goods were interred with the deceased; coins, a shoe and a plate.  He contends that these are vestiges of spiritual non-Christian beliefs about the afterlife that developed in Africa and were demonstrative of an “African based social identity” in the face of growing hostility in 19th century Philadelphia. 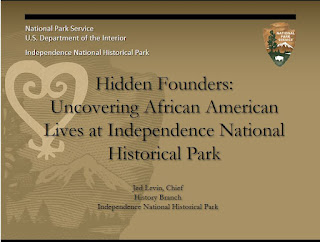 The next paper also dealt with African Americans in Philadelphia, this time in the late 18th century.  Jed Levin, Chief of the History Branch of the Independence National Historical Park, spoke of the excavations at the National Constitution Center and the President’s House over the past 15 years and detailed the contrasting stories of two African Americans in Revolutionary War era Philadelphia.   One, James Oronoco Dexter a free coachmen and Ona Judge, Martha Washington’s enslaved seamstress.  Using both historical documentation and the archaeology he was able to construct a forgotten piece of our collective national history. 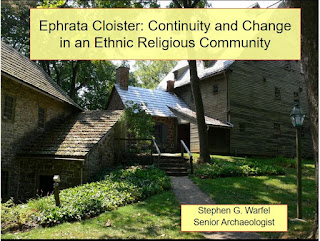 Our former Senior Archaeology Curator Steve Warfel spoke about the German religious community at Ephrata Cloister during the mid-18th century.  Steve’s presentation discussed the groups strict, pious, religious beliefs and how they changed as a result of internal and external pressures.  Some of these changes are reflected in the historic documentation others are not, but are evident in the archaeological record.  For example, their rules and beliefs are written about in several sources so they are known from the written record.  One such rule of behavior was a belief in poverty, they thought personal property to be sinful, and yet redware dishes were recovered archaeologically that clearly had initials scratched into the base, marking it as belonging to someone.

Demonstrating the transformation of their self-view, self-identification being at the core of the definition of ethnicity. 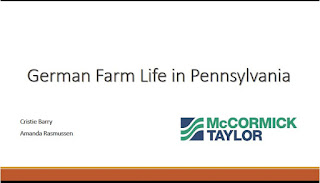 The final presentation of the day was delivered by two speakers, Cristie Barry and Amanda Rasmussen both from McCormick Taylor.  They also discussed Germans, focusing on two German farmsteads in eastern Pennsylvania tracing their development through the 18th and 19th centuries.  Looking at the farm layout and the household artifacts as evidence of the frugal, self-sufficient nature of the German occupants.  They too found that without the historical documentation it would have been difficult to establish an ethnic link based just on the archaeological record. 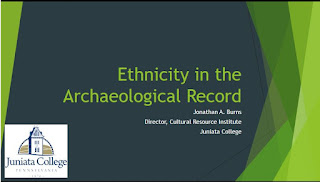 At the conclusion of the presentations Jonathan Burns, Director of Juniata College’s Cultural Resource Institute, provided a closing summary to the day’s discussions.  Many of the paper’s resolved that without the accompanying historic documentation it can be difficult to establish ethnicity in the archaeological record.  The exception to this is finding a unique artifact or artifacts that are obvious ethnic calling cards.  While conducting excavations at Fort Shirley in Huntingdon county a medallion / charm was recovered inscribed in Arabic “No God but Allah”. 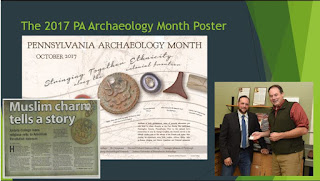 A clear marker of Muslim ethnicity, but an extremely rare find.

Along with the presentations Steve Nissly was in attendance demonstrating his Flintnapping skills. 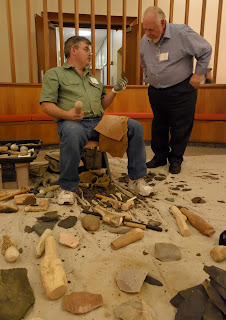 Artifact were being identified by Doug McLearen and Kira Heinrich, both from the Pennsylvania State Historic Preservation Office (SHPO). 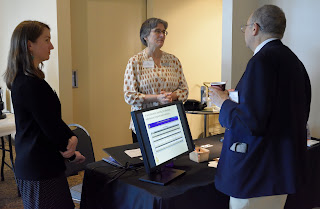 Noël Strattan and Hannah Harvey, also from the Pennsylvania State Historic Preservation Office (SHPO), explained the Cultural Resource Geographic Information System (CRGIS) and registered new sites.  In all it was another successful Workshops in Archaeology concluding of course with a reception in the Hall of Anthropology where participants and attendants could snack and chat less formally about the day. 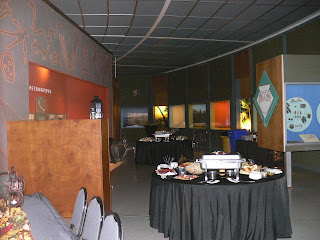 Hopefully this glimpse of the Annual Workshops in Archaeology has been enough to entice you to join us in the future.  Next year’s date is yet to be announced but we will post it here as soon as it is scheduled so stay tuned!


For more information, visit PAarchaeology.state.pa.us or the Hall of Anthropology and Archaeology at The State Museum of Pennsylvania .
Posted by PA Archaeology at 4:28 PM No comments: