As archaeologists, we are often asked to describe the best or oldest artifact we have found. People want to see the nicest point or the complete pot. But sometimes the small and insignificant objects can also give us important information on the people who have come before us. Two such objects are buckles and buttons. These objects mean little to us in today’s world, other than as functional items to hold our clothing together, but in the 18th century buckles and buttons were symbols of wealth and status.

First we will look at buckles, which were the primary type of fastener for both shoes and clothing through most of the 18th century. Metal buckles were largely produced in England and exported to America to be sold, although a small number of buckles were made by local silversmiths and clockmakers. Buckle frames were made most commonly of copper alloys, tin, and gilded brass; however, they were also produced in silver, gold, iron, blued steel, Sheffield plate, pinchbeck (a form of brass resembling gold), and close-plated iron (silver foil plated), as well as being embellished with wood, glass accents, gems, and ceramic inlays. They could be found in a wide range of shapes and sizes, in an almost limitless range of designs and decorations. Buckles were worn by men, women, and children to secure knee breeches, girdles, spurs, boots/garters, hats, sword belts, stocks (a man’s neck cloth), and most commonly, shoes. 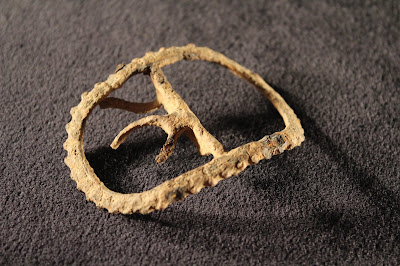 Buckles are commonly found on archaeological sites from the 18th century because they were so widely used by all ranks of society. In addition to being a way to hold together clothing and shoes, buckles were considered to make an important fashion statement. Social status can be noted in the type of material and extent of decoration on buckles, with more expensive metals and ornate decorations being attributed to the wealthy. Portraits of the time period, which could normally only be commissioned by the rich, show large and ornate buckles on the shoes, knee buckles holding the breeches to silk stockings, and luxurious textiles decorated with expensive buttons. 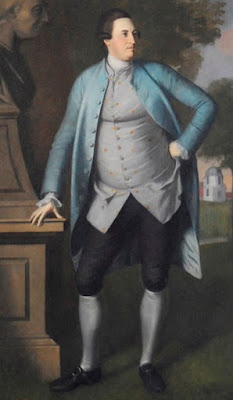 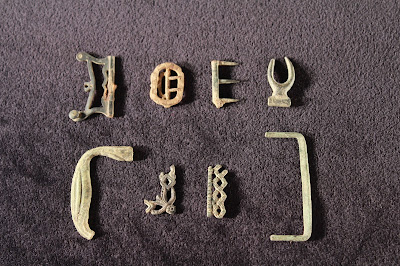 Account books from the late 1700s from two stores in Pennsylvania indicate the difference in price between ornate buckles and more ordinary buckles. A pair of “plated buckles” sold for £0-3-5, while a pair of “Silver Diamond Cut Shoe Buckles” was bought for £2-15-0. In a time period of constant change, especially during and after the Revolutionary War, when different forms of currency were used, buckles could also be exchanged for goods and services as a form of money.

By the end of the 18th century, buckles were beginning to go out of style in America and would be replaced by ribbons and shoe strings in the early 19th century.

Another small item that can provide information when found on archaeological sites is the button. As with buckles, buttons served as clothing fasteners and as a fashionable form of personal adornment through the 18th century. Buttons were used as early as the 12th-14th centuries but did not become common until the 16th century. Again as with buckles, most buttons were produced in England and exported to America. Buttons were made of numerous materials including various metals, ivory, pearl, conk shell, wood, bone, inlaid glass, horn, porcelain, leather, stone, and tortoise shell. 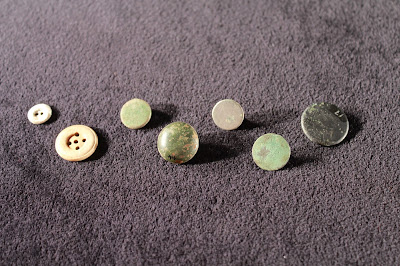 In the 18th century, buttons were worn primarily by men on their breeches, coats and waistcoats, sleeves, cloaks, stocks, and handkerchiefs. Women would begin using buttons more commonly in the 19th century. Types of material and quantities of buttons on a man’s outfit could indicate social status. Buttons were purchased separately from the garment and added on later, so personal taste could dictate how the garment was decorated. A wealthy gentleman may have purchased large quantities of expensive metal, bejeweled, or thread or cloth-wrapped buttons to line his coat and waistcoat, while a poorer man may have settled for a few pewter buttons. Along with expensive cloth and buckles, buttons were a visible expression of wealth for a man in the 18th century. Buttons were also utilized by the military as a form of decoration on the uniform but also to identify the service branch and often the regimental designation. 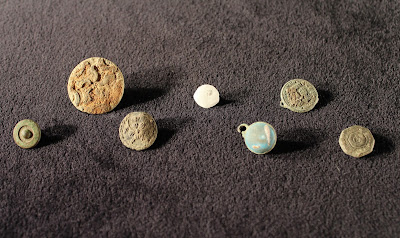 Buttons can often be dated by type of manufacture. Early buttons produced between 1700 and 1760 were cast as one piece with the eye drilled out afterward. Later, the shank was added by attaching or soldering to the back of the button. This process altered over time and is traceable, allowing the button type to be dated. Because buttons are very often recovered archaeologically, this can assist in the dating of a site. 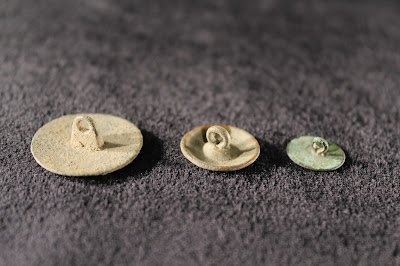 With changing fashions and styles, buckles would pass out of high fashion by the mid-19th century and today are used mainly as belt fasteners. Buttons, although still in use, are no longer indicators of wealth or status. The advent of the zipper and the use of plastic buttons on pre-made garments have relegated the button to the simple status of a closure. Today’s fashions are ruled not so much by quality of materials and decorative embellishments, but by brand label and celebrity endorsement. So, we can see the importance of finding these types of artifacts on historic archaeological sites.

Hopefully, this has given our readers a new respect for some of our smaller and less visually exciting artifacts. To the archaeologist, all artifacts are significant in some way for what they can tell us about a site - and buckles and buttons have their own stories to tell…

For more information, visit PAarchaeology.state.pa.us or the Hall of Anthropology and Archaeology at The State Museum of Pennsylvania .
Posted by PA Archaeology at 2:58 PM No comments:

How Geography Influences Settlements in Eastern and Central Pennsylvania

This past weekend marked the 88th annual meeting of the Society for Pennsylvania Archaeology. Individuals from The State Museum of Pennsylvania presented on a variety of topics ranging from using LiDAR to document archaeological and historic sites; attribute analysis of 18th century ceramics; examination of a contact period collection and an analysis of Washington Boro face effigy pottery.

This got me thinking - what is it about south central and eastern Pennsylvania that has drawn people here for thousands of years, a trend that is especially visible since the arrival of Europeans to the area. The answer lies in the geography of the region. Harrisburg is situated at the crossroads of the Susquehanna River and the Great Valley, which have been major trade routes since prehistoric times. This region of Pennsylvania is also situated just west of the fall line, which divides the Piedmont physiographic province from the Atlantic coastal plain. These geologic features have affected human settlement patterns throughout the past, and they continue to do so today.

The geologic feature known as the fall line acts as a natural barrier between the coastal plain and the regions to the west; It is most visible in rivers where waterfalls mark the location of this geographic feature throughout states along the East Coast. At these locations, fish migrating upstream to spawn are slowed and easily trapped in nets. The falls at Trenton on the Delaware and at Conowingo on the Susquehanna during the Late Archaic through Early Woodland periods were heavily occupied by Indians exploiting this resource. In addition, at the fall line, prehistoric settlements and historic cities would have served as a transitional point for goods being transported inland. The Great Valley Section of the Ridge and Valley Province has been an important north-south trade and migration route since before the arrival of Europeans. 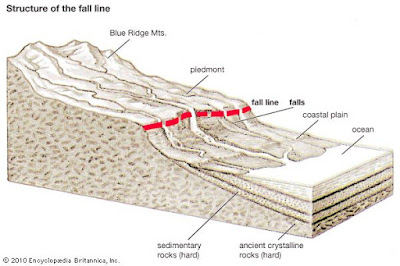 The division between the Coastal Plain and Piedmont physiographic sections and an illustrated cross section of the fall line.
Source: (top) The National Atlas of the United States, (above) Encyclopedia Britannica 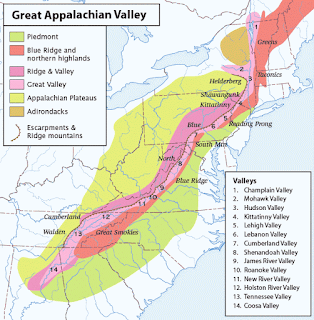 Contact Period Settlements in Southeastern Pennsylvania
The Susquehanna River provides a passage to the west from settlements on the East Coast through the Appalachian Mountains. The Late Woodland (1550 AD-1000 BP) and Contact period sites (1780 AD – 1550 AD) located on the Lower Susquehanna River acted as a hub for trade between European settlements on the coastal plain, and regions controlled by native populations further inland. The Susquehannocks, a contact period tribe, used their strategic location in the Lower Susquehanna Valley (in the area between what is now called Harrisburg and Safe Harbor, PA) to control the fur trade in the region. The Iroquois Confederacy, who were competing with the Susquehannocks for the fur trade, realized the strategic significance of this location and in the 1670’s attacked and eliminated the Susquehannocks from the trade.

The Effects of Geography on Modern Settlements
Many of the East Coast’s largest cities (historic and modern) are located along the fall line, including Philadelphia, Baltimore, New York City and Washington D.C. to name a few–It’s no coincidence that these locations were used by prehistoric people prior to the arrival of Europeans. Most of the cities mentioned above still serve as ports. Baltimore and Philadelphia both played major roles on settlements in the Lower Susquehanna Valley.

Harrisburg which, as previously mentioned, is located at the crossroads of the Great Valley and the Susquehanna River still sits at a strategic location for the transportation of goods throughout the region. The path that existed in prehistoric times through the Great Valley followed a route that is very similar to the modern corridor for Interstate 81. There are many other considerations that have factored into human settlement patterns in the Lower Susquehanna Valley, but the area has proven to be a strategic trade location abundant with natural resources. 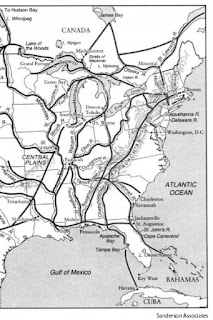 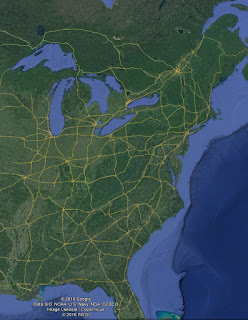 Conclusion
A basic understanding of the natural forces that shape where we live adds context and helps us to understand the ways in which human habitation has been shaped by our natural environment throughout time. Archaeologists examine these landscapes to better understand settlement patterns of the past and predict future settlement patterns.  Although much has changed since Europeans landed on this continent, the geography remains much the same. As a result, modern populations are still being shaped by their surrounding landscape.

We hope you have enjoyed this discussion of our rich Pennsylvania landscape and the impact of land formation on settlement patterns.  We invite you to consider the geography of your community and consider its natural resources.  This is your heritage and embracing the cultural and environmental resources of our earth are an important part of Preserving the Past for the Future.

For more information, visit PAarchaeology.state.pa.us or the Hall of Anthropology and Archaeology at The State Museum of Pennsylvania .
Posted by PA Archaeology at 2:54 PM No comments: