This Week at Fort Hunter

We have been busy with our excavations at Fort Hunter and have enjoyed some incredibly good weather.  The interest from the local community is terrific with close to 3,000 visitors last Sunday during Fort Hunter Day.  Our daily visitors at the site include school groups and home school students who want to see archaeologists at work.  We hosted Commonwealth Connections Academy this week as well as two large groups of home school students.  All of our visitors are enthusiastic and engaged in our excavations and we appreciate their enthusiasm.  If you haven’t had an opportunity to stop by the site, we close our excavation next week on October 2nd, 2015.

Our last blog described our investigation of the building identified as an Ice House on site maps and our doubts concerning its function.  Research conducted this spring provides our most plausible answer to the mystery of this building’s function. The following excerpt describing a milk house on Archibald McAllister’s property in 1828 for the publication The Cultivator offers the following;
·         The Milk-house was built in the north-east side of a slope, near the well and not far from the mansion. It was composed a stout stone walls, and the roof, which rose 6 or 3 feet above the surface of the ground, appeared to be covered with earth or tile, and was deeply shrouded with the scarlet trumpet creeper (Bignonia radicans), then in splendid bloom. The interior of the house, principally under ground, was fitted up with cistern, in which water stood nearly to the tops of the pans of milk, which were arranged in them. The house was entered by a flight of steps on the south, and there was a window on the north, which could be opened or darkened at pleasure, to give ventilation. For want of a natural spring, which many Pennsylvanians consider almost indispensable in a milk house, the water was conducted in a pipe from the well-pump, and after filling the cisterns to a certain height, passed off at the opposite side. The object was to obtain a cool temperature, in the heat of summer, which greatly facilitates the separation of the cream from the milk, and this object was amply effected, with the labor of working occasionally at the well-pump.

While difficult to see in early photos of the property, there does appear to be vegetation overhanging the side of this structure in the above photo.  Later images of dogs from this area of the yard also show signs of a large plant which we are surmising is the trumpet vine referred to in the article.
This week the interior was cleared of the floor boards and the artifacts recovered were a mixed assortment of late 19th and 20th century materials.  The exposed brick floor has been swept and additional measurements of the structure were taken yesterday.  Visitors this week included our architects and architectural historians from the PHMC who examined the structure and support our designation of the structure as a milk-house.  Our interns this semester will be working on a detailed drawing of the structure and we will continue to research photos and documents before definitively stating that this is its function, but again this seems to be a plausible identification.
We are continuing to dig along the east side of the porch, directly in front of the original stone house structure and have recovered several glass trade beads.  Historic documents indicate that there were several meetings held at the site with Indians and that trade was occurring in the area.  Joseph Chambers and Simon Girty were both licensed to trade in 1747-1748 in Paxtang Township which was the original township for Fort Hunter.    Several features have been exposed in this area which we are continuing to investigate and will report those findings in our next blog.

The foundation is almost completely exposed of a structure currently identified as a smokehouse.  Historic documents reference an octagonal shaped smokehouse on the property in 1828 and the dimensions are relatively close to the description.  There is a great deal of work to do in this block as there are multiple features which require careful excavation and mapping to insure that the proper function is assigned.  Removing the previously excavated soil to the south and east of our block has provided an opportunity to look at the entire foundation.  The diameter of this circular foundation measures just over 13 feet.  Certainly additional research will continue on this area, but the image of this foundation is pretty impressive.

We hope you’ve enjoyed this update on our investigation at Fort Hunter and will stop out to visit or check back on our blog to see what next week’s excavation might reveal about this historic site. As a reminder- October is Archaeology Month in Pennsylvania http://www.pennsylvaniaarchaeology.com/ArchMonth.htm  so please seek out an opportunity to visit a site or to read more about the heritage of your community as provided in the archaeological record.

For more information, visit PAarchaeology.state.pa.us or the Hall of Anthropology and Archaeology at The State Museum of Pennsylvania .
Posted by PA Archaeology at 1:46 PM No comments: 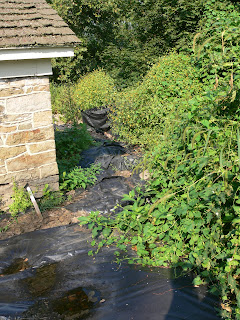 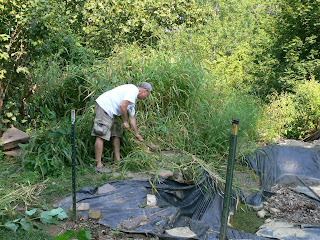 For more information, visit PAarchaeology.state.pa.us or the Hall of Anthropology and Archaeology at The State Museum of Pennsylvania .
Posted by PA Archaeology at 3:36 PM 1 comment: