A recent submission to the Section of Archaeology 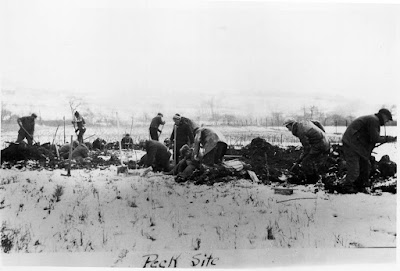 W.P.A. excavations during Winter at the Peck Site (36So1)

Winter in Pennsylvania is not typically a time of year that is well suited for archaeological fieldwork. That is not to say fieldwork in February does not happen. Indeed, it has and does, but it would be difficult to persuade anyone that conditions like the ones seen above are anything approaching optimal.  When the days are short, cold winds bitter, and the ground is well, frozen, archaeologists often take to the lab to process (that is to sort, clean, catalog, inventory, label and archivally package for curation) artifact collections from the previous season’s excavations.

Here at the museum, artifact collections that are the product of cultural resource management projects arrive year-round, although there does seem to be an uptick in submissions this time of year. Being centrally located as the State Museum is in Harrisburg, from time to time criticism bubbles to the surface that our efforts and attention can focus disproportionately on sites in the Susquehanna River Valley region. Given the diverse topography and size of the state, wide ranging archaeological research interests, and our own limited resources, this criticism is not without some merit. This week’s post attempts to kill two birds with one stone in that it highlights an artifact collection submitted for curation just two weeks ago (a “fresh” collection so to speak), and that also happens to come from Westmoreland County – a nod to our cohorts over the hills in the southwestern part of the state. 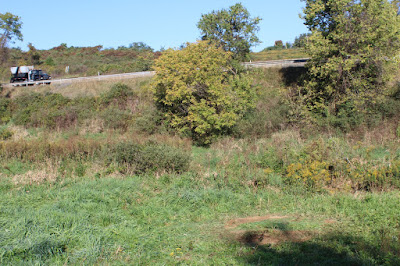 In 2016, McCormick Taylor Inc. conducted an archaeological survey and evaluation for PennDoT’s proposed improvements to the highway interchange of state routes 70 and 31 in South Huntingdon Twp., Westmoreland County. As a recipient of federal highway tax dollars PennDoT is obligated to make a good faith effort in identifying and evaluating cultural resources, and, if necessary, mitigating any adverse effects their undertakings may have on important historic and prehistoric sites. 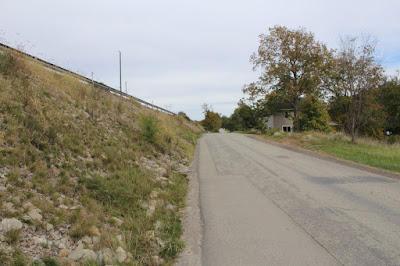 After eliminating areas of the project determined to have low archaeological potential due to modern disturbances or steep terrain, a total of 228 shovel test pits and two 1m x 1m test units were excavated across 12 ½ acres of ground. As a result of their work, seven new archaeological sites were recorded (36Wm1113 – 1119). Four of these sites consist of just 2 to 16 pieces of debitage each of local or regionally sourced cherts.  The very low artifact density, and the lack of diagnostic artifacts or cultural features were cited as justification to recommend these sites as ineligible to the National Register of Historic Places, and no further work was performed. 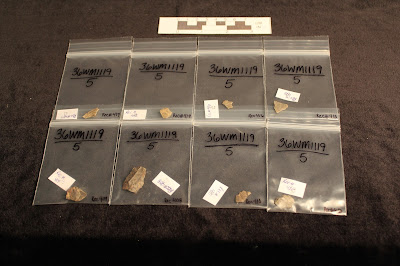 representative sample of lithic debitage from the Davis site (36Wm1119)

The Tignanelli site, 36Wm1113, comprised of mostly early 20th Century kitchen wares, bottle glass and architectural material such as brick, window glass and iron hardware, also contained about a dozen flake fragments of local chert. This site too, was recommended ineligible to the NRHP, primarily due to a lack of integrity and significance. There was one artifact in the assemblage however, that did stand out amongst the 1200 more mundane bits that is unique and worthy of a moment in the spotlight. 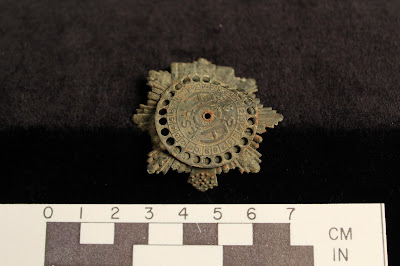 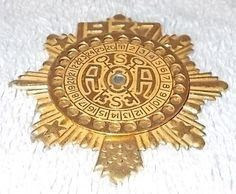 The 1937 Radio Orphan Annie decoder pin is a wonderful object of popular culture that harkens back to the days before television, when radio was king. It is easy to imagine that this, for a time, was probably a child’s most prized possession, and of course it conjures up images of the classic movie A Christmas Story, with Ralphie feverishly cracking the code only to be rewarded with a reminder to drink more Ovaltine. Not the type of thing to stop a transportation project in its tracks, but a charming artifact all the same. 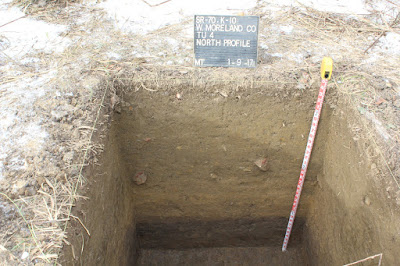 After the phase I survey, the final two sites, 36Wm1116 and 36Wm1119, were recommended to proceed to phase II, to determine their eligibility to the National Register. As is the case with most cultural resource management efforts, excavations were limited to the project’s area of potential effects, or APE.  For the Davis site, 36Wm1119, this meant a limited view at what McCormick Taylor acknowledges in their report as a site that in all likelihood extends beyond the project boundaries. The four phase two 1m x 1m test units yielded 48 chert flakes in addition to the 25 pieces recovered from the two phase one test units. Similar to the other sites identified for the project, no features or datable diagnostic artifacts were found at 36Wm1119, and consequently the portion of the site in the project area was deemed ineligible to the Register.

Finally, for the Markle site, 36Wm1116, PennDoT successfully modified the design of their project to avoid any potential impacts. In many situations, avoidance constitutes an agreeable solution for all parties involved, in that redesign is generally a less costly option for PennDoT as opposed to labor intensive data recovery undertakings, and, while no additional fieldwork is planned for, the site is nevertheless recorded and will (or, should) remain undisturbed, thereby serving the interests of the cultural resource community and ultimately the broader public.


-report on file Section of Archaeology, State Museum of PA

For more information, visit PAarchaeology.state.pa.us or the Hall of Anthropology and Archaeology at The State Museum of Pennsylvania .
Posted by PA Archaeology at 3:26 PM No comments:

As we enter the month of February for many of us our thoughts turn towards warmer weather and planning in the hope for an early spring. This happens to be Ground Hog day here in Pennsylvania and many a person will wait with great anticipation for Punxsutawney Phil to appear. Popularized by the movie Groundhog Day in 1993, this annual tradition has origins that go back much farther than one might think. 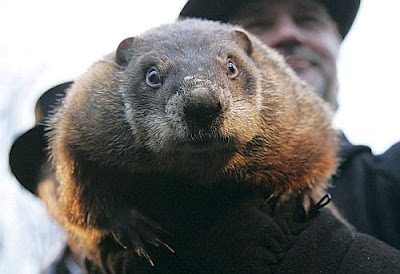 Punxsutawney Phil and his handler
(image: "Phil supports Candelora (Venice version)" by "Alessandro M." Licensed under a Creative Commons Attribution 2.0 Generic (CC-BY2.0). Accessed 1 February 2018. https://www.flickr.com/photos/7829129@N08/3247867168/
Oral tradition places the origin of the ceremony on German immigrants who encountered an abundance of groundhogs upon their arrival in Pennsylvania. The belief that if this ground boring animal came out of his hole and saw his shadow, he’d scurry back inside as an indicator of six more weeks of winter. How did it come to be that a rodent would be considered an accurate predictor of the weather? It actually has origins in Europe and was likely a carryover from religious teachings.
February 2nd corresponds with the forty-day period after Mary gave birth on December 25th in the Christian church, known as the Purification of the Virgin.  Women had to wait forty days after childbirth before entering a church or Temple again due to "uncleanliness". Eastern Orthodox Christian churches continue to practice this belief today, and all Christian churches schedule the Christening for forty days after the birth in keeping with this ancient purification practice.  Observed in Catholicism, and by Anglicans and Lutherans, the Feast of the Purification is otherwise known as Candlemas. The Church blesses all the lights to be used in its ceremonies throughout the year, since it was at Christ’s Presentation at the Temple that Simeon called him "the Light to lighten the Gentiles, and to be the glory of thy people."
Celebrated throughout Europe, Candlemas and its ties to weather and predictors of spring can be found in various poems and verses. Of German origin; For as the sun shines on Candlemas Day, So far will the snow swirl until the May.  The Scottish version; If Candlemas day be dry and fair, The half o' winter to come and mair, If Candlemas day be wet and foul, The half of winter's gone at Yule.  Lastly, the English version; If Candlemas be fair and bright, Come, Winter, have another flight; If Candlemas brings clouds and rain, Go Winter, and come not again. Pennsylvania’s ethnic melting pot includes all of these European groups, who continue to carry on some of their European traditions.
While these beliefs and origins seem rather antiquated today in this world of modern technology and (mostly) accurate weather predictions, these and other predictors were a necessary tool for cultures throughout time. Archaeological evidence of mid-winter celebrations at sites such as Stonehenge supply an opportunity to examine these belief systems. Archaeologists believe Stonehenge to be associated with the winter Solstice and excavations have revealed evidence of feasts and celebrations to support these theories.
Here in central Pennsylvania, the petroglyphs in the lower Susquehanna river near Safe Harbor include symbols and alignments for the annual equinox and solstices as well. Jay Toth, Tribal Historic Preservation Officer, of the Seneca Nation feels that many of these symbols are a reflection of the sky on the water and the images were then pecked and created in the rock. 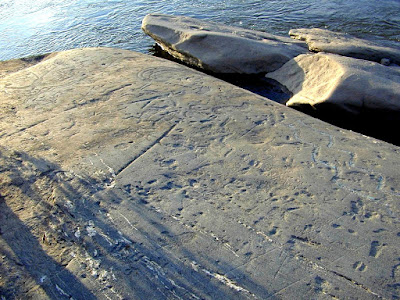 Little Indian Rock at sunset
The Iroquois Midwinter Ceremony occurred in late January or early February, dependent on the midwinter new moon and lasted at least a week. Iroquois belief systems rely heavily on the lunar calendar and an appreciation for moon phases and constellations helped to guide their survival. The Pleiades, a winter constellation of seven stars is known as the seven sisters in Greek mythology. When the Pleiades appeared in the sky in North America, it was a sign for the male hunters to return to the village from their early winter hunt. The ceremony was a period for renewal and thanksgiving, an opportunity for the hunters to rest before returning to the woods. A celebratory time of gathering in preparation for the remaining weeks of winter.
Environmental changes such as tree buds, or sap running are indicators of spring and one that our maple sugar producers follow closely. Birds that migrate begin to return north and animals who hibernate begin to emerge. These changes in the season and the significance of animals and birds to Native groups is likely reflected in the effigy figures created. Bears, turtles, owls and geese appear in artifacts such as clay smoking pipes, carved stone and wood, or shell ornaments which honor their significance.

Left to right: shell geese from the Byrd Leibhart Site (36Yo170) [photo by Duane Esarey]; a carved wooden owl effigy with brass inlay from the Strickler Site (36La3); a carved steatite pipe bowl with bear effigy and attached pewter stem from the Oscar Leibhart Site (36Yo9) [photo by Vince Cassaro]
These rituals and ceremonies were a valuable tool for ancient cultures in planning for the remaining months of winter. Whether predicted by the moon phases, constellations, floral or animal behavior each of these indicators were a survival tool and a coping mechanism for the dark days of winter. The desire to add light either by honoring the solar system, building a fire, or lighting candles all produced the same effect of illuminating darkness. These cultural practices have changed and evolved over time, but at the core of these is the desire for light and that sense of renewal that comes with spring.
We hope that you’ve enjoyed this reflection on our winter weather and that Punxatawny Phil’s prediction is for an early spring.
References:
Snow, Dean R., The Iroquois, The Peoples of America, Blackwell Publishers, 1996.
https://www.german-way.com/history-and-culture/holidays-and-celebrations/
http://www.groundhog.org/about/history/
http://www.schooloftheseasons.com/candlemas.html
﻿
For more information, visit PAarchaeology.state.pa.us or the Hall of Anthropology and Archaeology at The State Museum of Pennsylvania .
Posted by PA Archaeology at 1:50 PM No comments: