As the search for the French and Indian War period Fort Hunter continues new discoveries are made daily. As is so often the case with archaeology, these new finds pose more questions than they answer. While no structural evidence that can be definitively identified as belonging to the fort has been found, fort period artifacts are being recovered, such as fragments of tin-glazed earthenware, Whieldon ware and plain salt-glazed stoneware. 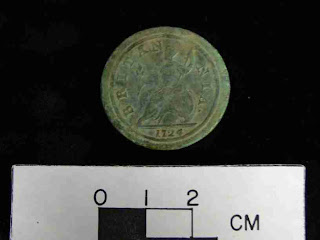 By far the most exciting find to date this season is that of a George I halfpenny dated 1724, recovered from what is being interpreted as the builder’s trench of the west wall of the ice house in the back yard of the mansion. Historic documents reference an ice house being built in 1794, however, the dimensions cited do not agree with the current structure. The halfpenny and mid-eighteenth century ceramics suggest this structure may be earlier than previously thought.

Further complicating the interpretation of the site, prehistoric finds continue to be made in the main excavation block. Feature 29 in particular, with the exception of two cut nail fragments has produced exclusively prehistoric material such as scores of chert, jasper and rhyolite debitage, as well as a dozen small fragments of quartz tempered, cordmarked ceramic sherds.

The excavation will continue for the next two weeks as part of the celebration of October as Archaeology Month in Pennsylvania. Sunday October 4th marks Indian Festival Day at Fort Hunter Park, and among the many activities and exhibits, archaeologists will be on hand to answer questions about the ongoing excavation. The dig site is open to the public, Monday through Friday 9 AM to 4 PM, and volunteer sheets are available for those wishing to assist us in our search for the fort at Fort Hunter Park.

For more information, visit PAarchaeology.state.pa.us or the Hall of Anthropology and Archaeology at The State Museum of Pennsylvania .
Posted by PA Archaeology at 10:58 AM 1 comment: 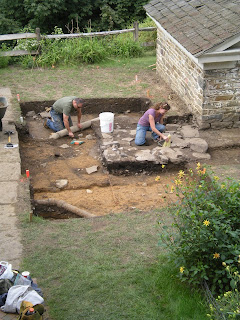 well feature and adjacent ice house
Shortly after removing the backfill encapsulating the 2008 excavation block the discoveries continued. One objective of reopening last year’s dig is to establish the relationship between the circa 1790 ice house and the adjacent structural feature interpreted as a well. While clean troweling the current floor of the surrounding excavation units a handful of stone chipping debris and two quartz tempered cord-marked prehistoric ceramic sherds were recovered indicating that this particular location along the banks of the Susquehanna River was a favored spot long before any French and Indian War fortifications were erected. 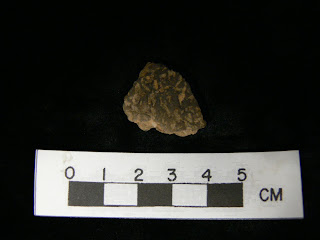 prehistoric ceramic sherd
Additionally, a series of five by five foot units have been dug to connect with areas excavated in 2006 and 2007. Fort period artifacts recovered from the upper stratum of these units include a large gun flint of English flint and a piece of scratch blue salt-glazed stoneware. Other diagnostic artifacts reflect a mix of the late 18th and 19th Century such as hand painted and transfer-printed pearlware, creamware, and porcelain. 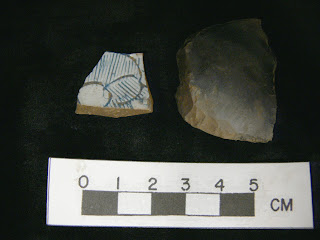 scratch blue salt-glazed stoneware and English gun flint
This Sunday marks the annual Fort Hunter Day at the mansion and surrounding park. Archaeologists will be on hand to answer questions from the public and volunteer sign-up sheets will be available for those wishing to assist us in finding the fort at Fort Hunter Park.

For more information, visit PAarchaeology.state.pa.us or the Hall of Anthropology and Archaeology at The State Museum of Pennsylvania .
Posted by PA Archaeology at 10:59 AM No comments: 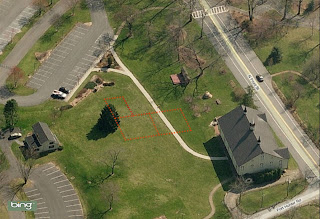 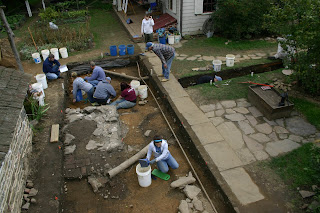 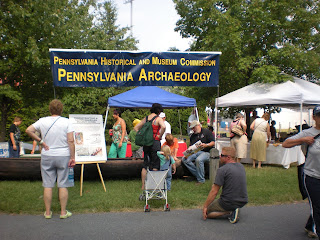 The State Museum's Section of Archaeology will be returning to the Native American Powwow held on City Island as part of the Kipona Festival in Harrisburg this Labor Day Weekend, Sept. 5, 6 and 7.

Attractions of the State Museum’s display are to include the ever popular recreated dugout canoe, informational brochures on State Museum programs with coupons for reduced admission, children's activity worksheets, the 2009 Archaeology Month poster, and an exhibit of select artifacts from City Island excavations.

The purpose of our presence at the powwow is to raise awareness of all things archaeological; that sites are important non-renewable resources, the upcoming public archaeology program at Fort Hunter Park, October is Archaeology Month in Pennsylvania, Archaeology Day at the State Capitol, and to encourage visitation to the State Museum and our websites. Come out and enjoy the unofficial end of summer this weekend at the powwow on City Island. 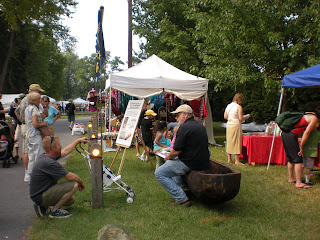 For more information, www.PAarchaeology.state.pa.us or the Hall of Anthropology and Archaeology at The State Museum of Pennsylvania .
Posted by PA Archaeology at 3:51 PM No comments: