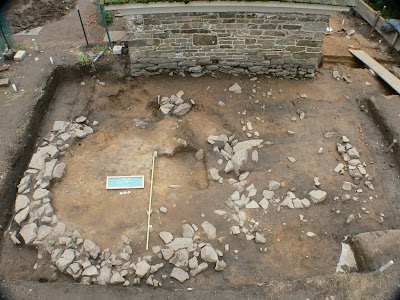 Excavations at Fort Hunter will continue weekdays 9am - 4pm, through October 7th.
For more information, visit PAarchaeology.state.pa.us or the Hall of Anthropology and Archaeology at The State Museum of Pennsylvania .
Posted by PA Archaeology at 1:56 PM No comments:

In the Public’s Eye - Out and About with Archaeology

The Section of Archaeology of The State Museum of Pennsylvania has been out and about with public programs the past few weeks and has returned to our excavation site at Fort Hunter Mansion and Park, Harrisburg.   Archaeologists understand the value of sharing research and discoveries with the public in order to engage them in our preservation efforts.  This becomes all the more evident when we are at large events like Harrisburg’s Kipona festival, Indian Steps Native American festival and Fort Hunter.  The public is hungry for information about the past and so enthusiastic to learn about our archaeological heritage. Thank you! Your interest and enthusiasm makes going out on weekends and evenings worthwhile and enjoyable.

As mentioned above, we have returned to Fort Hunter where we’ve been engaged with school groups- from elementary thru college age, bus tours and the Mansion’s regular visitors.  Everyone is surprised by the amount of detail and paperwork necessary to record our excavations.  From the most basic information such as site number (36Da159) to the measured elevation below datum of features- it is this precise scientific process that allows us to examine the results and evaluate the activities of the site occupants.

Our focus this year is concentrated on the area east of the milk house, inside the milk house and adjacent to the porch.  Despite some record breaking temps we have plugged away at re-opening units along the porch and expanding upon this area with two additional units-yeah F & M students! Excavation of several features within the east block interpreted as a smoke house has produced few artifacts.   We are currently investigating two postmolds and additional stains to determine if they might follow the pattern.

Inside the milk house we are examining an area in the northwest corner of the building.  Gravel fill noted though unexplained until now was removed in an effort to determine if this is a builder’s trench associated with the well adjacent to the milk house.  This section has been void of artifacts, but is frequented by a regular visitor fondly (or not so fondly?)  referred to as “Rocky”.   The regular appearance of shed snake skins is an indicator that there may be more than one “Rocky” visiting our site. 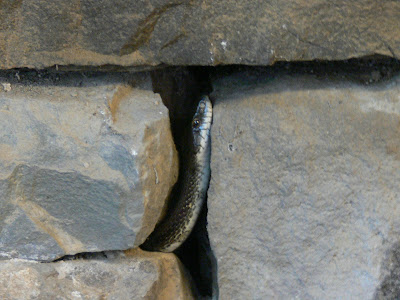 "Rocky" hanging out in the milk house

The units adjacent to the porch are continuing to produce a mix of 18th, 19th and 20th-century materials.  Sorting out multiple occupations and ground disturbances to interpret the activity and time period in which they occur is always a challenge in archaeology.  Our lab volunteers will assist with sorting, washing, labeling of the artifacts so they can be examined later this fall. Historic records indicate that this area was heavily utilized and the variety of artifacts and numerous soil disturbances supports these documents.


Speaking of out and about- come join us this Sunday, September 18th at Fort Hunter Days to learn more about the investigation and this rich archaeological site.  Archaeologists will be on site from 10:00 to 4:00, weather permitting.


For more information, visit PAarchaeology.state.pa.us or the Hall of Anthropology and Archaeology at The State Museum of Pennsylvania .
Posted by PA Archaeology at 3:37 PM No comments: