T is for Turtle 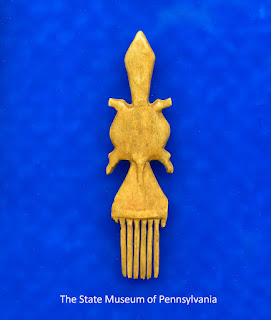 As we enjoy this beautiful summer weather, walking or driving down country trails and roads, be sure to keep an eye out for turtles.  Turtles have been revered by cultures around the world.  They are often viewed as wise beings, symbols of longevity, messengers between this and the spirit world or as some northeastern indigenous people believed in the creation of our world on Turtle Island.  Many eastern tribes, including the Lenape and Iroquois, had similar creation stories.  They believed that in the beginning the world was covered entirely with water. There was an island in the sky where the Sky People lived.  No one died or was born there, and all was well.  Until Sky Woman fell through a hole toward the sea where she landed on grandmother turtle or Turtle Island.  Various water animals took turns diving to the bottom of the sea trying to bring mud to spread on the turtles back.  Eventually one succeeds (depending on the version of the story as to which animal succeeded), but they did and when placed on the turtle’s back it created land that grew and grew eventually becoming the size of North America.  This over simplification of the creation story is derived from several versions and from several tribes, this and in other legends about turtles can be found here.
Turtles appear repeatedly throughout native legends demonstrating their relevance to human society.  This respect is recognized in the archaeological record by the many pendants, ornaments and effigies discovered on Northeastern sites.  Kinsey (1989) suggests that reptiles “constitute 15% of the Susquehannock [study of zoomorphic images] sample and less than 4% of the Seneca sample and these are limited to turtles and snakes; the former is the most common”.  In Pennsylvania, turtle pendants are more prevalent than pipe effigies, but there have been several found in other states. 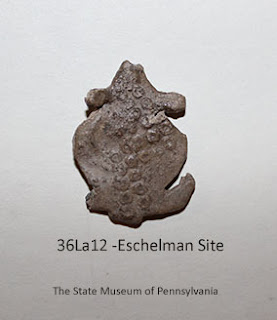 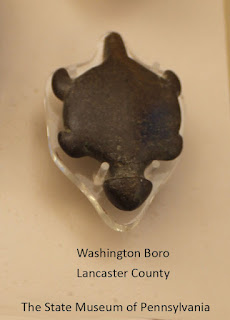 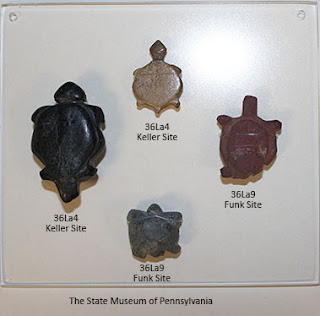 There is a very interesting pendant that was recovered from the Flint Mine Hill site in New York.  This site is described as “a vast industrial complex consisting of numerous quarry pits, quarry and production refuse piles, small campsites, and extensive workshops where chert was knapped” (Lenik, 2010).  The pendant depicts a turtle surrounded by a snake and is carved on both sides.  Suggested interpretations are that it is an amulet meant to drive away demons by depicting a snake devouring another animal (Parker, 1925) or as perhaps the snake invoking a guardian spirit to protect the wearer who was of the turtle clan (Lenik, 2010) 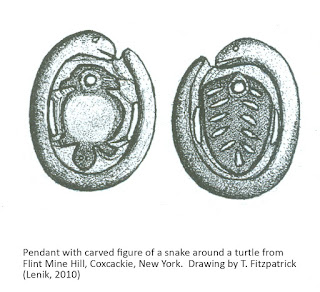 Not only are turtles represented on portable artifacts, but they are also found as petroglyphs and as effigy rock features.  Petroglyph sites in Pennsylvania, Ohio and West Virginia were documented by James Swauger, many of which exhibit designs interpreted as turtles. 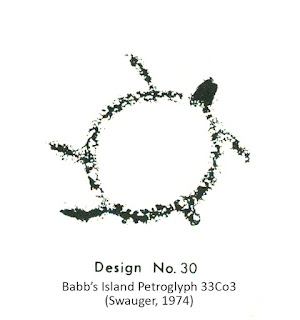 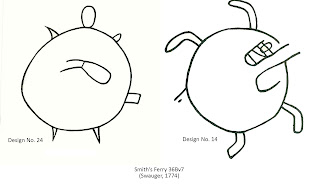 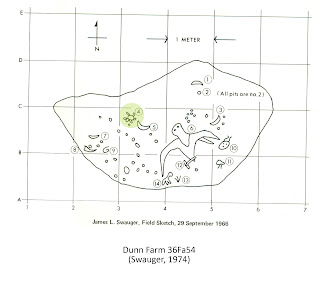 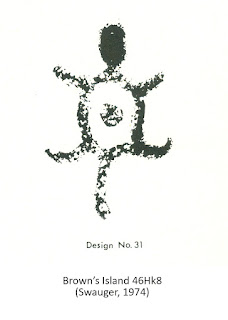 There are also several examples of effigy rock features in North Dakota and the Lake of the Woods region of Canada. 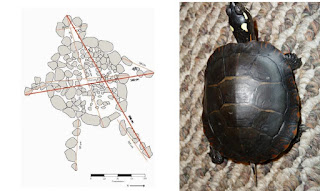 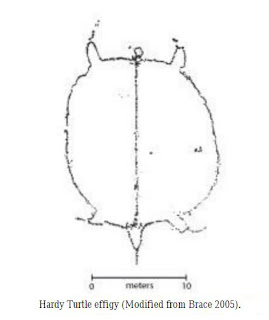 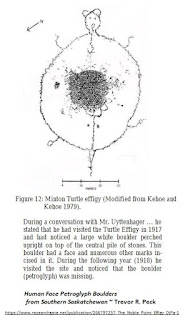 It is clear that turtles have been revered by indigenous people since at least the Archaic period (Pearce, 2005), by the variety of specialized images presented.  Physical turtle shells are also represented in the archaeological record.  Their shells were used as utilitarian objects like bowls and scoops. 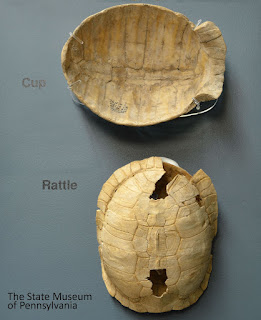 Turtles have been esteemed by cultures around the world, so it is no surprise that Native Americans respected this now often-overlooked creature as well.  So, keep in mind the special turtle as you explore mother nature this summer and if by chance you see one along the roadside maybe give this noble creature some respect and if safe, a hand in crossing.

For more information, visit PAarchaeology.state.pa.us or the Hall of Anthropology and Archaeology at The State Museum of Pennsylvania .
Posted by PA Archaeology at 5:04 PM No comments:

Marine shells were an important medium of exotic exchange among native societies of the Middle Atlantic and Upper Ohio Valley societies during the Late Woodland (1000 – 1550 AD). The recovery of shell from archaeological sites of this period is archaeologically traceable well into the Appalachian Mountains and other far flung regions of Pennsylvania’s interior. These areas are principally centered on the lower Upper Ohio Valley at sites in the Monongahela -Youghiogheny drainage of southwestern Pennsylvania -  the headwaters of the Potomac Valley that reach to the rugged mountains of Fayette and Somerset counties and; the waters of the Susquehanna above the Blue Mountain water gap located a few miles above Harrisburg, Pennsylvania.

Evidence of the Late Woodland shell trade in these various geographic regions of Pennsylvania becomes obvious by the locations of archaeological sites. Ornaments made from different species of marine shell are principally obtained from the Chesapeake’s intertidal and coastal environments. We should hasten to note that some later Woodland groups obtained fresh water shells from the shoals of large fresh water river systems for ornamental use. We will, however, save this topic for another time and focus on the marine species found at archaeological sites. 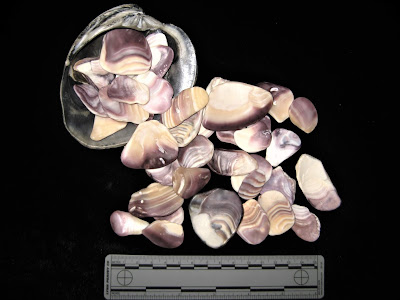 There are five principal species of marine shell that made their way inland through trade from the Chesapeake region. These species are distinctive in morphology and used differentially as personal objects of adornment such as bracelets and necklaces. Among the more common, widely distributed forms, were the tiny disk-shaped beads fashioned from the thin sections of quahog a.k.a. hard clam shells Mercenaria mercenaria. Quahogs occur all along the Atlantic coast and constitute a valuable source of protein among sea food connoisseurs. Several different species of marginellas can be found from Cape Henlopen, Delaware (Lowery 2012) south to the West Indies. Both of these were popular among the lower Susquehanna Valley’s Shenks Ferry, Mason Island and Monongahela groups of the Piedmont and Allegheny Mountain/Lower Upper Ohio Valley regions of Pennsylvania (Heisey and Witmer 1964; Mayer-Oakes 1955). 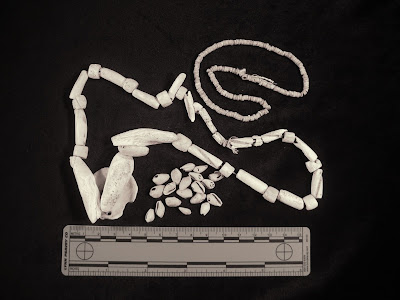 Beads made from a variety of shells recovered from Late Woodland sites in Pennsylvania.

Another less common bead type found at some of their habitation sites was made from Olivella (sp?) a more southern variety of gastropod that occurs from North Carolina to Florida. These resemble the classic shape of an olive-shaped fruit, however, they are somewhat larger than marginella shells.

Busycon or whelk shell objects found in the Northeast and Middle Atlantic areas are generally considered rare objects of the Late Woodland period. Busycon contrarium or lightning whelk and Busycon canaliculatus a.k.a. canaliculatum or channel whelk are the most common and occur from the Outer Banks of North Carolina to Cape Cod, Massachusetts to St. Augustine, Florida, respectively - a very wide distribution, indeed. 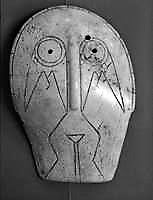 Busycon shells were made into drinking cups and tube-shaped beads of various lengths. West and south of the Middle Atlantic region anthropomorphic/zoomorphic engraved gorgets were worn around the neck. Carved from the large dorsal cup-shaped part of the Busycon shell, these impressive shell objects are principally found in Fort Ancient and Mississippian contexts that date to the circa 1000 – 1600 AD period. The engraved Busycon shells are a principal artifact type of the Southeastern Ceremonial Complex (Waring and Holder 1945).

Section of a wampum belt illustrating the variety of color design combinations.

Wampum shell beads, characterized by their short cylindrical shape, appears to be most common after the close of the Late Woodland period around 1550 AD.  Suffice is to say that the English called this type of shell bead peag, a shorter version of the Massachusetts Algonquian word wampumpeag. White, purple and, rarely black, are the principal colors of wampum with slight gradations within these colors. The Dutch and French referred to wampum as zeewant and porcelaine, respectively (Bradley 2011). These colorful beads were typically fashioned out of quahog or hard clam and whelk shells.

The Chesapeake Bay and its inter- connected river systems was the main corridor for the spread of marine shell onto the Pennsylvania landscape during the Late Woodland period. Although adjacent states can document a longer period of use (Lowery 2012), and this probably applies to Pennsylvania as well, currently the evidence of marine shell use in Pennsylvania is limited to the Late Woodland period. Preservation of these objects is largely determined by the site’s environmental context. Unfortunately, marine shell is a material that is rarely preserved in most situations leaving few records.

We hope that you have enjoyed reading about the different kinds of marine shells, their distribution through trade and how they were used by the Indians who once lived in Pennsylvania centuries ago. Please join us another time as we present another interesting topic relating to Pennsylvania and its archaeology.

For more information, visit PAarchaeology.state.pa.us or the Hall of Anthropology and Archaeology at The State Museum of Pennsylvania .
Posted by PA Archaeology at 3:00 PM No comments: