PATHWAYS TO THE PAST: 2022 Workshops in Archaeology 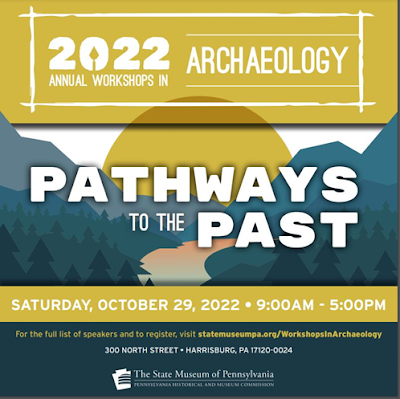 This year’s presentations will discuss not only the physical paths, portages, and trade routes that traverse Pennsylvania’s mountains and valleys, but also the less tangible and often hidden paths of the Underground Railroad, a pathway to freedom traveled by many formerly enslaved peoples.  Archaeology will be used as a tool to reveal actual paths traveled by indigenous people over thousands of years; and how those paths developed through time.  These Precontact footpaths and trails evolved into trade routes and eventually into many of the roadways we use today. 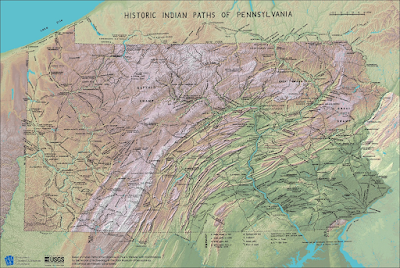 There will also be presentations at the Workshops discussing how examining these many routes across Pennsylvania have aided in examining settlement patterns from the Precontact period into the historic period. The untold stories of marginalized people who discovered their heritage through discovery and archaeology are sharing these often-unheard stories and preserving them for future generations. By bringing these stories together the process creates a tapestry of Pennsylvania’s collective heritage.

This program provides an opportunity to engage with scholars who have researched these pathways, observe the use of lithics often traded along these routes and to learn about the community preservation efforts of formerly enslaved descendants.  Unfortunately, the early registration period has already closed, but walk-in registration is available at the 3rd Street entrance The State Museum of Pennsylvania on Saturday beginning at 8:30 am.

The program is as follows:

9:10 – 9:25 Janet Johnson, Acting Senior Curator of the Section of Archaeology, The State Museum of Pennsylvania with opening remarks

3:30 – 4:00 Panel Discussion, Questions and Discussion with the presenters and Closing Remarks 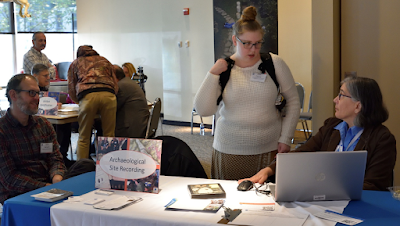 In addition to the presentations, David Burke and James Herbstritt, from the Section of Archaeology, will be available during the breaks for artifact identification.  Find out what that ‘Whatsit’ really is or isn’t.  Noël Strattan and Casey Hanson from the State Historic Preservation Office (SHPO) will also be available during the breaks to assist with recording archaeological sites in PA-SHARE. Steve Nissly will also be demonstrating and sharing his knowledge as an expert flint knapper with attendees, as well as displaying examples of his talented craft. 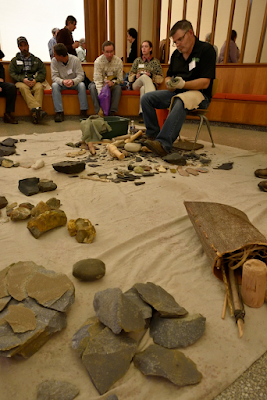 Immediately following the presentation there will be a panel discussion and a participatory question-and-answer session with the presenters.  The day will conclude with an informal reception including light snacks and a chance to socialize with others interested in Pennsylvania’s past.

For additional information, please check out the link at The State Museum of Pennsylvania’s website.

For more information, visit PAarchaeology.state.pa.us or the Hall of Anthropology and Archaeology at The State Museum of Pennsylvania .
Posted by Trails of History at 5:54 PM No comments:

In This Week in Pennsylvania Archaeology (TWIPA) blog we are revisiting the “Pots of the Past” series by showcasing some of the Precontact Woodland period pottery vessels that were recovered from the Upper Delaware Valley by Bill Leiser, Fred Assmus, and Dave Werner Sr. These gentlemen were avocational archaeologists with the Lenape Chapter 12, Society for Pennsylvania Archaeology, Inc. Their artifact collections, accumulated over many years (Werner 1972), were donated to the State Museum of Pennsylvania and New Jersey State Museum in 2019, 2014 and 2004.
Since the 1960’s, many of the later Precontact Woodland period sites within the Delaware River valley have been impacted by commercial development and farming. Most of these sites were located between Port Jervis, New York and the Delaware Water Gap, a river distance of nearly forty miles.  Additionally, some of these locations are now preserved by the Federal government as the Tocks Island Natural Recreation Area. Viewed from a research perspective, Precontact Woodland pottery from these archaeological collections become quite important. The Delaware Valley was the principal corridor where the camps and villages of Indigenous people lived and were the places where their objects were lost or discarded. Later, during our nation’s colonial period this segment of the Delaware was the wayward pathway between strategic points of the valley from Fort Hunter, New York (erected in 1711-12) in the Mohawk Valley and Philadelphia, Pennsylvania (Wallace 1971).  Two overland paths: the Lackawanna and the Minisink, located north of the “Great Swamp”, linked this stretch of the Delaware River with the North Branch of the Susquehanna River (Evans 1755). These overland routes form a triangular-shaped corridor that Indigenous people, and later, Europeans, used to gain access to other parts of the Northeast west of the main Delaware Valley. So, having established a general environmental, archaeological, and historical back drop of the region let us now direct our attention to the images of Precontact Woodland pottery from these most interesting avocational collections.
To begin, classification in any analysis is a procedure that requires researching older publications, reviewing the current literature, and by analyzing the actual archaeological specimens. Assigned typologies of the pottery featured in this blog were completed years ago by archaeologists (Kinsey 1972; Kraft 2001; Lenig 1965; MacNeish 1952). In our case, we present these pottery types using the terminology of the day when “groups” or “series” categories were used to analyze Precontact Woodland ceramics. A general chronology, based on radiocarbon dating when and where applicable, and the cross-comparison of decorations and form of each pottery type is also provided based on more recent investigation in the northeastern United States. We should, mention that there are other pottery types and their associated variants that exist from Upper Delaware Valley pottery collections, however, they are considered minority types that could be used for future TWIPA blog submissions.
The Owasco series or Pahaquarra phase (Kraft 1975) is the earliest beginning circa AD. 900 and lasting to circa 1300 (~1100- 700 years ago). Owasco pottery has a wide distribution in the Northeast and parts of the Middle Atlantic area. It is most common, however, in northern Pennsylvania/New Jersey and southern New York. The Intermediate series called the Oak Hill phase is considered a “transitional” pottery phase that began circa AD. 1300 with ancestral roots in Owasco and ended circa 1400. It also overlaps with the area defined for Owasco though many examples are found geographically as far south as the Overpeck site on the middle Delaware and the early Shenks Ferry Blue Rock phase sites in the Lower Susquehanna valley. The end of the precontact Woodland pottery sequence in the Upper Delaware is characterized by the Tribal series called the Minisink phase from AD. 1400-1650. During the mid-years of the Minisink phase (circa AD. 1520 -1575) European trade goods filtered into the Upper Delaware Valley from the Atlantic coast, marking the early years of the Contact period in this region. During this period of Indigenous occupation in the Upper Delaware Valley, temporally distinct pottery variants of the Lenape Delaware culture overlap at some of the archaeological sites elsewhere.  These variants have been traced northward into the headwaters of New Jersey and New York’s Hudson Valley. This phenomenon suggests that an unmeasured level of social interaction developed among Algonquin and Iroquoian groups living there (Brumbach 1975). In like manner, some of these late-stage pottery types spread into the pre-contact North Branch valley sites of the Susquehanna where they shared ancestral links with the Cayuga and Susquehannock tribes (Herbstritt 2020; Kent 1984).
Precontact Woodland Pottery Vessels from the Leiser, Assmus and Werner Collections
Early Stage - Owasco series (Pahaquarra phase)
(Levanna Cord-on-Cord)
(Sackett Corded)
(Castle Creek Punctate collarless variety)
Middle Stage - Intermediate series (Oak Hill Phase)
(Owasco Corded Collar)
(Kelso Corded)
(Oak Hill Corded)
Late Stage - Tribal series (Minisink phase)
(Chance incised)
(Durfee Underlined)
(Garoga Incised)
(Munsee Incised)
We hope that you have enjoyed this journey through time that featured examples of some of the major precontact Woodland pottery vessels from the Leiser, Assmus and Werner collections. Building upon these typologies for identifying pottery types is a tool for archaeologists in tracing these culture groups and their activities across the landscape. Examining the variations of these pottery types and working with other researchers and indigenous groups, offers a more complete picture of the significance of Precontact pottery to these cultures.

We invite you to visit with us again when we present additional interesting topics on Pennsylvania Archaeology. As a reminder, please take a moment to visit the PHMC web site for registration and other information about the annual Workshops in Archaeology Program that will be held at The State Museum of Pennsylvania on October 29th  2022. This year’s theme PATHWAYS TO THE PAST will explore the various paths indigenous groups used to navigate trade and exchange as well as the contributions archaeology has made in discovering unknown stories of the past.

2020       The Late Woodland Period in the Susquehanna and Northern Potomac Drainage Basins, Circa AD 1100-1575 In: The Archaeology of Native Americans in Pennsylvania. Volume II. University of Pennsylvania Press, Philadelphia.

1972       Archeology of the Upper Delaware Valley: A Study of the Cultural Chronology of the Tocks Island Reservoir. Anthropological Series Number 2. Pennsylvania Historical and Museum Commission, Harrisburg.

1975       The Archaeology of the Tocks Island Area. Archaeological research Center

1965       The Oak Hill Horizon and its Relation to the Development of the Five Nations Iroquois Culture. Researches and Transactions of the New York State Archaeological Association, Vol. 15, No.1 Buffalo.

1952       Iroquois Pottery Types: A Technique for the Study of Iroquois Prehistory. National Museum of Canada Bulletin No. 124. Ottawa.

1972       The Zimmerman Site 36-Pi-14. In: Archaeology of the Upper Delaware Valley: A Study of the Cultural Chronology of the Tocks Island Reservoir. Anthropological Series No.2. The Pennsylvania Historical and Museum Commission, Harrisburg.

Posted by Trails of History at 2:27 PM No comments: