This week we continue with our ongoing series of posts on early historic ceramics found on archaeological sites in Pennsylvania.

As with other ceramic types we have previously discussed, American potters’ early experiments with stoneware were informed by their European predecessors, most notably English and German styles such as Fulham and Rhenish, respectively. Manufactured in North America as early as the mid-18th century, American Gray stoneware’s main advantage over earthenwares, such as redware, is its water-tight properties.

This desirable characteristic is the result of higher kiln temperature when firing a ceramic that produces a durable, vitreous body that will not absorb liquids. The body and paste of American Grey stoneware can range in color from grey to tan-ish/brown depending on both the temperature of the kiln as well as the specific chemical composition of the source clay. For example, clay with a higher iron content will impart a browner appearance.

Most American Grey stonewares also exhibit salt-glazed exteriors similar to that found on English-made scratch-blue stoneware reviewed in an earlier post. While scratch blue stoneware’s short period of manufacture can be an asset to an archaeologist looking to determine the age of a site or feature, American Grey stoneware’s long, and continuing production offers no such advantage. A marked difference between these two ceramic types is their thickness in cross-section, which informs us about their different functions. Crocks, jugs, bottles and jars of American Grey stoneware, with their thick walls correspond with their utilitarian nature primarily as storage vessels and containers. English scratch-blue as we’ve discussed previously, on the other hand, was a delicately thin tableware commonly in form of shallow bowls and tea cups.

Frequently the robust, utilitarian appearance of American Grey stoneware was softened or counterbalanced by the application of simple yet effective motifs of flowers, sprigs and even animals in cobalt blue. Unusual vessel forms, large examples, or pieces with iconic decorations, such as an American Eagle continue to be highly prized by collectors as any viewer of PBS’s popular Antique’s Roadshow can attest .
Pottery manufacturers often stamped or marked vessels with their company stamp facilitating research by archaeologists as to the place and period of manufacture.  The New Geneva Pottery excavations (36FA0091) and (36FA404) provided evidence of manufacturing techniques from the nineteenth and early twentieth century. New Geneva’s location in Southwestern Pennsylvania along the Monongahela River, provided a source for clay and ready access for transporting the finished pottery to markets.  New Geneva was just one of many stoneware pottery manufacturing areas in Pennsylvania enabled by skilled potters and our natural clay resources. One of Pennsylvania’s more familiar stoneware potteries was the Pfaltzgraff pottery in York founded in the early 1800’s. Research of manufacturing processes, clay sources, glazes developed, and function and utility are important in understanding the daily activities often not documented in the historic record. 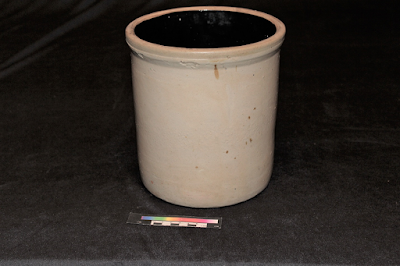 We hope you have enjoyed this brief introduction to American Grey stoneware and will stop back again as we continue our review of historic ceramics found on archaeological sites in Pennsylvania. This often-recovered category of artifact is an important tool for archaeologists in studying the past and Pennsylvania’s rich cultural heritage.  Additional examples of colonial ceramics can  be accessed on the Pennsylvania Historical and Museum Commission’s on-line collections and we hope you will visit our other posts to learn more about ceramic manufacture in Pennsylvania.

2001   A Guide to Artifacts of Colonial America. University of Pennsylvania Press, Philadelphia

For more information, visit PAarchaeology.state.pa.us or the Hall of Anthropology and Archaeology at The State Museum of Pennsylvania .
Posted by Trails of History at 11:12 AM No comments:

This week we go back to our series on early historic ceramics recovered from archaeological sites and their significance in interpreting the historic and archaeological record. Previous posts have included both European and locally produced ceramics of the three main categories: Earthenware, Stoneware and Porcelain. Archaeological research of fragments of broken pottery have led to a better understanding of the pottery industry in the colonies, as well as insightful stories related to the individuals who created, purchased, and used these vessels. Our focus on porcelain is another example of the story a broken piece of pottery can tell us about our past.

Chinese porcelain was imported to England in the fourteenth century as very high end, luxury items often mounted in gilt silver. By the sixteenth century, commercial trade had increased and a greater quantity of porcelain, specifically created for trade, was available, although it was still considered a luxury. Chinese porcelain was the highest quality porcelain produced and was what others attempted to create. It was made from a combination of kaolin clay and finely ground feldspathic rocks, characterized by its high gloss glaze, highly vitreous body of white to light gray and a thin translucent glaze. Decoration in the form of underglaze blue designs of scenery or flowers, and in the late 1700s, the inclusion of red overglaze with gilding on vessels copied from the popular Japanese porcelains. Seventeenth- and eighteenth-century English potters attempted to produce these various vessel forms and patterns, but never captured the translucency and quality of the Chinese porcelains. However, porcelains of both sources were considered high-end, expensive furnishings that were not obtainable by many households.

Philadelphia was the largest colonial city until 1790 and was an important center for commerce. Its location along the Delaware River and in close proximity to the Chesapeake Bay, allowed for shipments from industries across the region. Imported wares from England and the West Indies were stocked by  merchants and shipped to the surrounding communities. Rich in natural resources, manufacturing of an assortment of goods contributed to the Commonwealth’s status. Philadelphia potters established their ability to produce earthenware vessels known as redware in the first half of the 18th century and were beginning to experiment with production of other vessel forms.

The period surrounding the Revolutionary War was ripe with colonial protests over taxation by the British Parliament. The Townshend Acts (1767) were a series of laws and taxes on the American colonies to raise revenue for England following the end of the Seven Years War, known to us as the French & Indian War (1756-1763). Resistance to these taxes and control of the colonies by Parliament incited political writings and increased the resistance to England’s control. Philadelphia newspapers were widely read and expressed the political views of many patriots who inspired colonists to support domestic industries, further reducing dependence on Great Britain.

And rouse your bold hearts at fair LIBERTY'S call;

No tyrannous acts shall suppress your just claim,

Or stain with dishonour AMERICA'S name

Our purses are ready,

Not as SLAVES, but as FREEMEN our Money we'll give.

In March of 1770, the Acts were repealed but the decline in demand for British exports had created irreversible change.  To boycott the imported goods and their associated taxes, local industries which could produce wares in forms similar to the British imports had begun.  Seen as symbols of patriotism, interest continued in these local wares even after the termination of England’s taxation.

Philadelphia potters Gousse Bonnin and George Anthony Morris began planning in 1769 for the American China Manufactory, the first American porcelain factory dating from 1770/71-1773 in an area known as Southwark. Their porcelain was described by Joseph Shippen, Jr. to his father in 1771 as “preferable to that made in England, as to its fineness or quality; but as yet it has rather too yellowish a cast, owing to the want of a particular ingredient used in the composition for glazing; which could not hitherto be imported from England on account of the Non-Importation agreement.”

Based on historic records, wealthy patriots, such as John Cadwalader, John Dickinson, and John Penn purchased cups, saucers, tea pots, plates, pickle dishes and sauceboats from this factory. Despite the support of these influential patriots, the factory began to faulter and looked to the Pennsylvania General Assembly for financial support in 1771. The cost of starting the factory and the difficulty in finding skilled potters, however, were insurmountable. In November of 1772, a rebellion by their workers against poor working conditions and unfulfilled promises led Bonnin to close the factory and advertise his intention to sell to the highest bidder.

Despite advertisements in newspapers, the factory failed to sell and Bonnin was bankrupt, leading to the property being sold at a sheriff’s sale in July 1774. Bonnin and Morris’s efforts to establish a porcelain factory were sufficiently successful to lead to other porcelain manufacturing in the colonies, so credit for the first porcelain factory lies with them. Indeed, the patriotic movement had taken hold and a desire to break free from British control was greater than ever. The political campaign throughout the colonies to break free culminated in 1776 with the signing of the Declaration of Independence in Philadelphia.

The Revolutionary War and the role of Pennsylvania in manufacturing goods was significant. Philadelphia’s patriots would help to lead the way in supplying goods and people necessary to win the war. The American China Factory had ended but, in its place, grew a new industry.

John Adams, who served as a member of the Continental Congress, visited the site in late March 1777, as recounted in a letter to his young son, Charles:

I then went to the Foundery of Brass Cannon. It is in Front Street in Southwark, nearly opposite to the Sweedes Church. This Building was formerly a China Manufactory, but is now converted into a Foundery, under the Direction of Mr. Biers [Byers], late of New York... (Brown, 2007)

The 1774 sheriff’s sale described the lot as; “on Front-street aforesaid, 232 feet, and in rear or depth on Wicacoa Lane, 319 feet, containing by computation one acre and an half.”
Excavations conducted by students from the University of Pennsylvania in 1967 and 1968 on the lot described above produced multiple vessel fragments, and discards from the manufacturing process. Comparative research of the fragments with known vessels marked by Bonnin & Morris with either an “S”, sometimes reversed, or a “P” provided a better understanding of the vessel forms produced. Advertisements in a 1771 newspaper had listed only S as a manufacturing mark, but analysis of the clays through x-ray diffraction enabled the identification of additional manufacture marks. The researchers identified manufacture of vessel forms to include fruit baskets with latticework edges, bowls, cups, punch bowls, and sauceboats.

The colonial ceramics recovered at various sites across the Commonwealth are an important tool for studying our past. They reflect consumer behavior, ethnic choices and in the case of those wares produced later in Philadelphia, the beginning of manufacturing in our state. Those industrious individuals that produced wares from local clays in a similar manner as they had in England, created an industry that would see Pennsylvania become a leader in manufacturing of durable goods for decades to come. We invite you to view additional examples of colonial ceramics on the Pennsylvania Historical and Museum Commission’s on-line collections.

2007      Piecing Together the Past: Recent Research on the American China Manufactory, 1769-1772. Ceramics in America, Chipstone Foundation.

1992      The Buried Past: An Archaeological History of Philadelphia. University of Pennsylvania Press, Philadelphia.

2001      A Guide to the Artifacts of Colonial America. University of Pennsylvania Press

For more information, visit PAarchaeology.state.pa.us or the Hall of Anthropology and Archaeology at The State Museum of Pennsylvania .
Posted by Trails of History at 11:09 AM No comments: