In 2014, as a part of its Anthracite Heritage Program the University of Maryland conducted an archaeological field school in the patch town of Pardeesville, Luzerne County, Pennsylvania. Recently, these artifacts were submitted to The State Museum of Pennsylvania for curation. For those readers not steeped in the lingo of the anthracite coal region of northeastern Pennsylvania, a patch town is a small cluster of houses built by coal companies to house workers and their families.
Perhaps the most famous patch town, if any could be considered “famous” is the Commonwealth’s very own historic town of Eckley, also in Luzerne County.  This was also the location of the filming of the 1970 movie “The Molly Maguires”, starring Sean Connery. The history of the coal mining industry in Pennsylvania touches upon several social and economic research themes, arguably chief among them the origins of organized labor as a response to the exploitive practices of the coal companies. Shifting demographics and social friction also features prominently as successive waves of immigrants settled in the region in the late 19thcentury. These historical conditions still resonate with the realities the region faces today.

A great deal of scholarly research has been and continues to be done on the anthracite region’s rich heritage, and the reader is directed to resources that cover the topic in greater depth such as the link above to the University of Maryland’s work, as well as the Pennsylvania Anthracite Heritage Museum, and Eckley Miners’ Village. The goal of the field school was to recover material culture related to the lives of immigrant and first-generation coal laborers to address research themes including land usage, demographics, consumer behavior and health. Excavations in Pardeesville focused on the side and back yard of the eastern half of the duplex residence on lot #57, the Yanac House, where a single family, the Berish’s, lived from at least 1930 through 2000.

After a preliminary surface survey of the property, a series of shovel tests and test units were excavated over the course of several weeks. The most prolific artifact deposit (3,180 artifacts) was identified in test unit #1, abutting the southwest corner of the house. Metal objects, such as cut and wire nails and spikes, comprised nearly half of the recovered artifacts, followed by glass objects including window and container glass as well as several whole medicinal vials and jars.

This rectangular pit, measuring 4’ wide, 5’ long and 5’ in depth and designated as Feature 2, was interpreted to be a refuse pit or privy. Analysis of the ceramic and glass objects recovered from the feature revealed a date range spanning the 1940s to the 1960s. The feature’s most unusual contents were found near the bottom of the excavation unit – 232 semi-complete rayon or nylon stockings. This seemingly odd horde prompted some hypothesizing on the part of the field school team, informed by thorough historic background research to provide some context for what we could consider an unusual quantity of an everyday domestic item, specifically a feminine item.

A daughter of George, coal miner and patriarch of the Berish family, worked in a nearby silk mill up until the time of its closing in the 1950s. She could have had access to surplus stocking inventory, but this doesn’t necessarily explain such an abundance of material. The team considered the possibility that the large quantity of nylons was related to the manufacture of rag rugs and carpets. Constructing rag rugs, durable and often multicolored, was a popular craft in the post-war period, and may have been a cottage industry for the Berish women and children, supplementing their family’s income. However, if the stockings were acquired a few years earlier, they would have been an even more precious and profitable commodity.

As with many material goods during WWII, synthetic fabrics such as rayon and nylon (then relatively recent inventions) were diverted from consumers to support the war effort. Following the end of the war, nylon manufactures refocused production and supply on the domestic market, though initially they could not meet the pent-up market demand. In 1946, cities across the U.S. experienced the unpleasantries of classic economics that unfold when too many dollars chase too few goods.

The Nylon Riots – no, it’s not the next up and coming girl punk rock band – although someone should probably trademark the name – the closest analogy seems like something between a Black Friday mob in the days before Internet shopping meets a reality TV show pitting brides-to-be against each other, scrambling for the best deal on the perfect dress.  A snapshot from the Pittsburgh Press captured the commotion when 40,000 women lined up for only 10,000 pairs of stockings. Certainly, an obscure historical event, but one that speaks to the influence beauty standards have, how and why they change, and the lengths people are willing to go to achieve perceived status.

We hope you’ve enjoyed this week’s look at an unusual artifact from the anthracite region of Pennsylvania and its connections to forgotten post-war history. This archaeological investigation is just one component of the Anthracite Heritage Program’s efforts to preserve the stories and cultural heritage of the region.  This interdisciplinary approach to understanding and preserving the past provides students an opportunity to examine and appreciate historic and contemporary issues in their communities.

For more information, visit PAarchaeology.state.pa.us or the Hall of Anthropology and Archaeology at The State Museum of Pennsylvania .
Posted by Trails of History at 10:21 AM No comments:

Sugar - It’s not so sweet story

When we think of February we often think about Valentine's Day and the sweet treats that are readily available to share with our loved ones.  Those sweet treats are often high in sugar, which brings us to our discussion of sugar and its role in Pennsylvania’s archaeological record.

Philadelphia was an important seaport with access to the sugar trade from large plantations in the Caribbean.  The popularity of sweets in 18th century Philadelphia saw a demand throughout the colonies for refined sugar.  Sugar Cane grown in the West Indies was brought to Philadelphia by ships loaded with vast quantities of raw sugar and molasses. These trade ships returned to their points of origin with flour, wood, and salted meats.  Enslaved Africans labored in deplorable conditions to cut the sugar cane and process it for shipment.  Laborers suffered from hideous cruelties and often died during the dangerous processing of the cane into raw sugar. The economies of France, Britain and the American colonies benefited from the hardships endured by these laborers. In England and Wales, from 1663 to 1775 consumption of sugar increased twentyfold and rose more rapidly than bread, meat, and dairy products in the eighteenth century.

Raw sugar arriving in Philadelphia required additional processing to create a finer, whiter sugar. This labor-intensive process of cooling and heating the sugar repeatedly, produced various stages of sugar products. Philadelphia sugar refiners were primarily located on the waterfront with access to the wharves where the weighty barrels of raw sugar were unloaded.  European immigrants, free Blacks and enslaved people provided the labor force necessary to develop Philadelphia as an important location for sugar refining.

Early refining processes utilized large cauldrons for boiling the cane syrup and molds and jars for crystalizing the sugar. After boiling, the sugar was packed into conical earthenware molds with drainage holes in their tips. The molds were fitted into jars so that the molasses could drain off the hardening sugar. This by-product was the coarsest and least refined form, sold as raw brown muscovado.  The crystalized sugar remaining in the earthenware vessels, became rock hard and was sold as “loaf sugar”. This rock-hard sugar required hammers to reduce it into chunks. The refined white granulated sugars for sugar bowls, required additional effort to crush the chunks of sugar with a mortar and pestle to the desired coarseness, then separated by sifting to the required degree of refinement. An immense amount of manual labor was necessary to produce the refined sugar to which we are now accustomed.

The conical earthenware molds could break during the processing stage and due to their large size, were ideal discards for filling in low-lying areas of the landscape. Archaeology conducted in 1995-96 in advance of the construction of the Metropolitan Detention Center in the area of North 7th and Arch streets in Philadelphia uncovered over 3,000 pieces(sherds) of broken sugar molds and a few of the jars which collected the molasses. 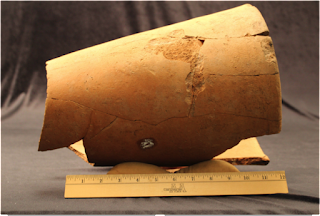 The reconstructed sugar cone shown here was recovered at 710 Arch Street in a buried land surface below the layers of modern development. It was found with other artifacts such as white salt-glazed stoneware, oriental porcelain, wine bottles, kaolin pipe stems and bowls, and a military button. Based on analysis of these artifacts, the deposit was dated to 1768. To the rear of lot 710 was the pottery of Abraham Miller (TWIPA 4/26/2019)  and his son Andrew.  Miller was  an early redware potter in the craft industry before experimenting with other forms of earthenware pottery.  No records indicate he was manufacturing sugar mold vessels, but the period of his pottery and the date of the deposit introduces the possibility.

The abundance of recovered sugar molds and jugs at the Metropolitan Detention Center site(36PH0091) is likely associated with built landscapes along the Philadelphia waterfront and the desire to further develop the area in the 19th century. Built landscapes were the intentional filling of low-lying areas with debris, enabling construction on previously inaccessible land surfaces. By the 1830’s pro-abolitionists in Philadelphia and the surrounding counties had sought alternatives to cane sugar due to the harsh conditions of enslaved laborers.  Sugar beets soon replaced cane sugar and rural areas utilized more maple sugar products.

View of the back of the Pennsylvania Sugar company refinery from the Delaware River, Fishtown area of Philadelphia, ca 1883-1896. Image Historical Society of Pennsylvania

The Penn Sugar Refining Company was founded in 1868 at Fifth and Girard Streets, later moving to the Fishtown section of the city. The company grew to the point that in the 1950’s it employed more than 1500 people and was a complex of eighteen buildings.  The company was purchased by New York based National Sugar Refining Company (Jack Frost) and operated until 1981, when the company went bankrupt.  The Penn Sugar site lay dormant until it was reborn through adaptive reuse as the SugarHouse Casino which opened in 2010 (renamed Rivers Casino Philadelphia in 2019).  Archaeology conducted at this site by A.D. Marble yielded evidence of craft industries, social and economic change over time and further understanding of consumer behavior in 18th century Philadelphia.

We hope you have enjoyed this look back at the origins of sugar and can take a moment to reflect upon the toils of the many enslaved laborers for which we benefited. Visit the on-line collections of the Pennsylvania Historical and Museum Commission to see examples of sugar bowls and shakers, there’s even a Pennsylvania Sugar Refining Company sugar sack.  Remember, a little sugar goes a long way so share that sweet treat with your sweetheart.

Report to the U.S. Department of Justice, Federal Bureau of Prisons, Washington, D.C.

1999   Global Problems and the Culture of Capitalism. Allyn and Bacon, Boston, MA

For more information, visit PAarchaeology.state.pa.us or the Hall of Anthropology and Archaeology at The State Museum of Pennsylvania .
Posted by Trails of History at 11:03 AM No comments: