This week in Pennsylvania Archaeology will highlight another influential woman in Pennsylvania archaeology.  Verna (Lunglhofer) Cowin was born February 12, 1931 in Altoona, PA.  She was raised in Bethlehem, PA where she graduated from Moravian College in 1952 with a degree in English.  Verna was a sporting young woman, she played field hockey and participated in archery tournaments on both local and state levels; winning many, including the Bethlehem City championship.  It was her interest in archery that would lead her to take lessons from the president of the Pennsylvania Archery Association who just happened to be Paul Cowin's father.  After she graduated from college and he returned from service in World War II, Verna and Paul married on June 14, 1952.

Shortly after their marriage, Verna and Paul relocated to Battle Creek Michigan where Verna taught in Penfield and Harper Creek schools.  She was also a member of the successful Michigan women's archery team.  As was customary at the time, Verna left the workforce when they had children, two daughters.  After moving back to Pennsylvania in 1962, she was a girl scout leader, served as the Butler neighborhood chair holding a position on the council, and joined the Butler chapter of the American Association of University Women who would award her Women of the Year in 1984.

As the children grew older Verna felt that "she was getting bored" and that "she wasn't using her mind to full capacity," according to her husband Paul.  That is what prompted her to go back to school.  In 1971 she was enrolled in the Anthropology Department at the University of Pittsburgh as a graduate student.  In order to acquire some much-needed field experience she joined the crew of the first field season excavation of Meadowcroft Rockshelter under the direction of Dr. James Adovasio.  She went on to participate in several Carnegie Museum of Natural History excavations in 1972, including the Bonnie Brook Monongahela Village under the direction of Richard L. George and Dr. Donald W. Dragoo.  This early association with the Carnegie Museum would prove to be the beginning of 40 years of dedicated service to the museum's section of Anthropology.  During her return to the Meadowcroft excavation in 1976 she was appointed as director of research for the nearby Avella burial mound which she continued to excavate through 1978 with the intention of using the research for her dissertation.  She earned her masters degree in 1980 and her doctorate in 1985, although she did not use her Avella mound research as planned.  Verna was a woman who liked to be busy and if her studies and research were not enough, she also taught six anthropology courses between 1975 and 1981 for the University of Pittsburgh, as well as teaching an Introduction to Anthropology course for prisoners at the Western Pennsylvania Correctional Institution in 1976.  Later going on to direct field schools for Slippery Rock University and Westmorland Community College at Hanna's Town, as well as a Carnegie sponsored field school in Erie.

In 1980 she became the Region VII Archaeologist for the Pennsylvania Historical and Museum Commission, which allowed her to carry out archaeological surveys in south-central Pennsylvania.   It was when this program ended in 1982 that Verna became the head of excavations for the Pittsburg Plate Glass headquarters (PPG).  This was a large excavation for the new PPG headquarters in downtown Pittsburgh; and would prove significant for the understanding of Pittsburgh's history.  By digging deep, 17 feet below street level, Verna discovered thousands of artifacts, wells, privies, and house foundations from the 19th century proving that Pittsburgh's past was still intact, not destroyed by modern activities as was the thought at the time.  This discovery changed the way compliance archaeology was conducted in the city, requiring archaeologists to consider the depth of excavation in light of her findings.  The report of these excavations was the basis of her doctoral dissertation as well as her exhibit  at the Carnegie museum "Pieces of the Past: Archaeology in Pittsburgh" for which she was awarded the Award of Merit from Pittsburgh History and Landmarks foundation and the Award of Merit from the Association for State and Local History.

After defending her dissertation Verna was hired as Assistant Curator in charge of the Upper Ohio Valley Archaeology program at the Carnegie Museum of Natural History. The program was started in the 1950s by William J. Mayer-Oaks and Donald W. Dragoo.  She became an Adjunct Assistant Professor in the Anthropology Department of the University of Pittsburgh in 1986, a position she held until 2001; and was promoted to Associate Curator at the Carnegie Museum in 1988.  Verna was extensively published; 38 publications, 9 reports and 34 papers delivered at local and national conferences.  Dr. James Adovasio stressed "that her Cultural Resource reports reflected significant research contributions to Western Pennsylvania prehistoric and historic archaeology, not just gray literature".

Dr. Verna Cowin technically retired in 2001 but maintained her office at Carnegie Museum as a Research Associate.  She passed January 3, 2013 and her beloved husband Paul joined her March 24, 2013.  They are sorely missed by the archaeological community.

We hope you have enjoyed this review of another significant woman in Pennsylvania archaeology.  Archaeology and Anthropology have embraced the role of women in the sciences and we encourage our young readers to consider pursuing the sciences as a career. Preserving our past for the future is important for all of us in understanding social change, settlement patterns and cultural adaptation to name a few as our world ever changes.


For more information, visit PAarchaeology.state.pa.us or the Hall of Anthropology and Archaeology at The State Museum of Pennsylvania .
Posted by Trails of History at 4:46 PM

2022 Workshops in Archaeology - Pathways to the Past 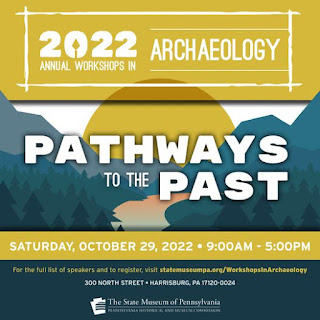