When George Catlin, the renowned 19th century artist from Wilkes Barre, Pennsylvania wrote these words …
“The rock on which I sit to write, is the summit of
a precipice thirty feet high, extending two miles in
length and much of the way polished, as if a liquid
glazing had been poured over its surface. Not far
from us, in the solid rocks, are the deep impressed
footsteps the great Spirit (in the form of a track of a
great bird), where he formerly stood when the blood
of the buffaloes that he was devouring, ran into the
rocks and turned them red.” ….Catlin 1859.

The artist/explorer was describing a Native American legend place on the Coteau du Prairie of southwestern Minnesota which today is called Pipestone National Monument (Figure 1). This location is the place where Native Americans, to this day, quarry the brilliantly colored red stone whose namesake is taken from George Catlin.Catlinite is actually a misnomer term for any easily worked soft red argillaceous stone. It is native to a number of places including South Dakota, Wisconsin and the well known Pipestone National monument region. This material is used in the manufacture of stone smoking pipes, beads and other ornamental objects by Native American cultures; some of which are around 2500 years old (i.e. tube pipes). Much debate has been brought to the forefront regarding the sourcing of Red Plains Pipestone a.k.a. Catlinite (for example see Brown 1989; Gundersen 1987; 1991; 1993; Sigstad 1973).


In Pennsylvania Red Pipestone objects begin to appear archaeologically during the mid 17th century. One splendid example in the collection of The State Museum of Pennsylvania is a calumet style pipe from the Susquehannock Strickler site (36La3) dated at 1645-1665 (Kent 1984). This is the earliest example so far reported from a Native American site in the Susquehanna Valley. The remaining red pipestone objects in the collections that retain known provenience data are additional pipes, beads and pendants – items of personal adornment that relate to 18th century Native American occupations. Representative examples of some of these forms as well as the Strickler site calumet are shown in Figure 2. Red shale objects from the Catskill formation which are similar in appearance to Catlinite were reported at the Summy Site (36Le1) an early Shenks Ferry component (Witthoft 1952). These objects were cut and ground to shape; the complete example was formed into a triangular pendant. 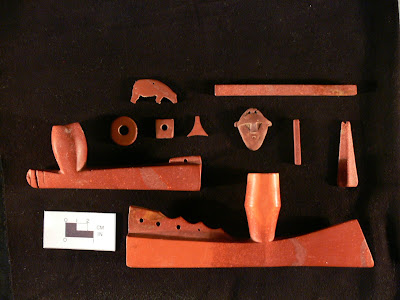 A subjective streak-plate combination Munsell Color test procedure for discriminating differences of Red Plains Pipestone material from Susquehannock and Seneca sites has been completed. This study that suggests the Susquehannock related objects were from quarry sites in Wisconsin and Minnesota and the Seneca site material solely from Wisconsin source(s).

Catlinite is red pipestone, however, not all red pipestone is Catlinite, by definition. Elemental/mineralogical sourcing of the so-called catlinite objects from Pennsylvania would be necessary to determine definitely, their quarry origins so one may only state that the stone from which they are made likely originated from a source(s) somewhere in the mid- Continental United States.

Brown, I.W.
1989 The Calumet Ceremony in the Southeast and Its Archaeological Manifestations.
American Antiquity 54:311-331.

Catlin, G.
1859 Letters and Notes on the Manners, Customs and Conditions of the North American
Indians. Two Volumes in One. J.W.Bradley, Publisher. Philadelphia.

For more information, visit PAarchaeology.state.pa.us or the Hall of Anthropology and Archaeology at The State Museum of Pennsylvania .
Posted by PA Archaeology at 11:18 AM