In the late 1980s, the City of Harrisburg began to experience an economic rejuvenation under the driving force of the newly elected mayor, Stephen Reed. One of his projects was the revitalization of City Island, situated in the middle of the Susquehanna River. He proposed a new parking lot, a new baseball stadium and a variety of other attractions. At one point, he proposed a hydroelectric dam that would turn the river into a lake, flood part of the island but encourage more recreation. Another proposed project was the Sports Hall of Fame. Federal permits were necessary for these proposed projects and because it had long been known that the island was inhabited by prehistoric peoples archaeological surveys were conducted under section 106 of the National Historic Preservation Act.

To shorten a very long story, much of the outer margin of the island (200-300 feet) and the southern section below Market Street consisted of recent flood deposits. The northern section above the Walnut Street Bridge was largely disturbed by a series of baseball stadiums and a large water treatment plant. However, located in the center of the island is a well stratified archaeological site recorded with the Pennsylvania Archaeological Site Survey (P.A.S.S.) files as 36Da12. The City of Harrisburg supported several seasons of testing in this area and the Bureau for Historic Preservation continued to conduct public excavations during Archaeology Month until 2004 when the focus of excavations were moved elsewhere.
Site 36Da12 contains components that range from a Middle Archaic bifurcate point occupation beneath eight feet of alluvium to a light scatter of Late Woodland artifacts in the plowzone directly under the macadam parking lot. The most intensive occupations, however, occurred during Late Archaic times, characterized by numerous fire-cracked-rock hearth features replete with net sinkers and straight stemmed projectile points.

One of the most spectacular features recovered from the island was a cache of nine stone artifacts consisting of celts, celt blanks and an axe blank. These were found in a tightly stacked arrangement that was seemingly placed in a small hole. A straight stemmed point was found near-by and radiocarbon dating places the feature’s age at about 4000 BP. 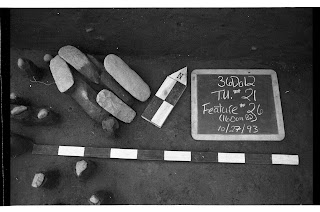 The cache is interesting for several reasons but one of the most striking is that it seems to combine two technological traditions - celts and axes - that archaeologists once thought were from different time periods. Celts are axe-like implements, 10 cm. to 15 cm long, rectangular in shape, and usually highly polished. The cutting edge or bit could be straight or curved and the poll end was frequently tapered. They usually occur in the Woodland Period, but especially in the Late Woodland. They are believed to have functioned as small hatchets although edge wear patterns suggest they were used on soft materials as associated with skinning and butchering of animals. Axes are usually much larger, weighing five or ten pounds and up to 40 cm long. They were hafted into a handle facilitated by a groove pecked into the pole or blunt end of the tool. These are frequently ground and polished into shape. Stone axes were clearly used in heavy duty cutting activities and frequently show damage on the bit end. During the Middle Archaic Period they usually exhibited a full groove, however, by Late Archaic times, axes were usually only ¾ grooved.
Archaeologists classify celts and axes as ground stone tools, although they are also known as pecked and polished stone tools, these descriptive terms refer to how they were made. Celts and axes were either made from large flakes cleaved from river cobbles or from cobbles that are similar in size and have a general shape of the desired finished product. Native Americans in this region frequently chose dense volcanic or metamorphic rocks for these tools. The first step was to chip them into the general shape of the tool called a preform. This was followed by hammering the piece (called pecking) with a hammerstone until all of the flake scars were removed and the piece achieved it’s near final form. Axes have a groove for hafting and this would be pecked into the pole end running perpendicular to the long axis of the tool. Essentially the entire surface was crushed by this pecking process enabling the final step of polishing. Polishing was completed using a fine textured rock or a mixture of sand and lots of water to achieve a smooth finish. This process was especially important for the bit end. It is important to note that for an average size implement such as those from the City Island cache, this process of chipping, pecking and grinding and polishing could easily require twenty hours or more to complete. Axes start off very large, 30 to 40 cm long and are gradually worn down in size through re-sharpening the bit subsequent to breakage and dulling. The pole end of an axe frequently shows damage from being used as a hammer. It is unclear, how or if, celts were hafted. One experimental form designed and successfully used in the construction of several dugouts (Carr, McLearen, Herbstritt, Johnson 2006) consisted of inserting the pole end of the celt into a large wooden handle.

The celt/axe cache designated Feature 26 was recovered from within an area of the site near the bottom of a buried A horizon. The artifacts were stacked in parallel fashion, aligned northwest by southeast. This feature measured 27 cm north-south, 32 cm east-west and was 18 cm deep. The smallest specimens were placed on the top of the larger ones, with the largest on the bottom. Two nearly finished celts were on top, followed by the five other blanks. Located on the bottom was a very large flaked stone biface, and a large unfinished axe. 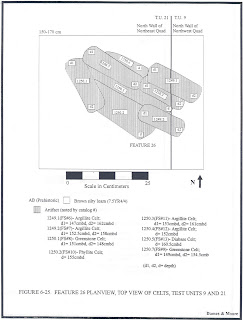 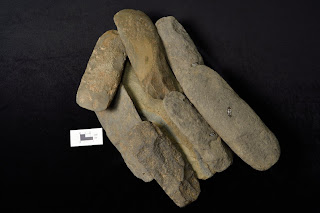 Top image is map from the field of cache in situ prior to removal. Bottom image is recreated based on field record.

The two nearly finished celts have been pecked over most of their surface. The polishing had begun on the bit half. Both implements are made from finegrained sandstone. Based on the presence of cortex, both of these originated as flat cobbles approaching the size and shape of the finished product. One of these (Cat. 1250.1) is plano-convex in cross-section and could have functioned as an adze. The other (Cat. 1250.7) is biconvex in cross-section and could have functioned as an axe or some sort of a defleshing tool. 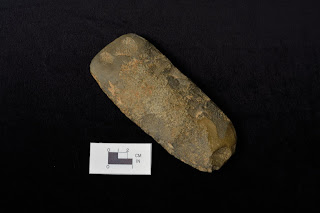 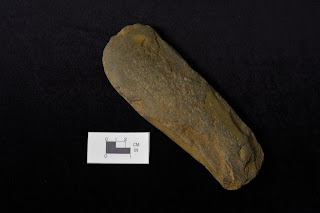 Five specimens appear to be preforms or celt blanks. One of these is rectangular in shape, but rounded on both ends (Cat. 1249.1) and minimally trimmed along the edges. This implement could also have been made from a flat cobble. The other four are large flakes and at least two retain their cortices from the original core or block of material. All are narrow and thick and seem to have been initially struck or formed, using large hammerstones. The flaking morphologies of these preforms range from extensive bifacial flaking to minimal trimming on the ventral surfaces. Three of these (Cat. 1250.2, 1250.3 and 1250.4) are plano-convex in cross-section. The fourth example is the most extensively flaked bifacial piece (Cat.1249.2) and is bi-convex in cross-section. 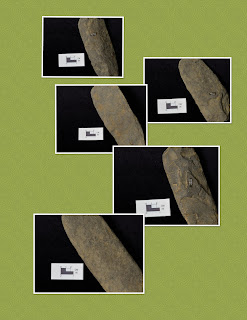 The largest piece from the feature is an argillite/hornfels flake (Cat 1250.5), 34 cm in length and 3.6 cm in thickness. Based on its width to thickness ratio, this example could have been produced by a soft hammer or a massive wooden billet. The bulb of percussion has been removed and the bifacial edge has been minimally worked. The intended use for this piece is unknown. 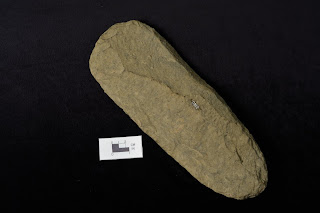 The last specimen is an unfinished axe of finegrained sandstone (Cat. 1250.6). The body has been chipped into shape and the bit end pecked but not polished. The groove was not started but the overall shape is that of an axe and not a celt. Interestingly, six meters to the east, in the same level another unfinished axe (Cat. 1398.1) was recovered. The bit end had been chipped, although smashed by subsequent hammering, and a groove was started on one face. 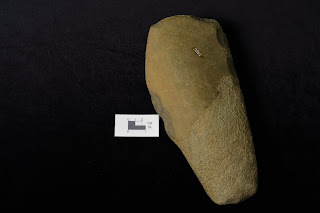 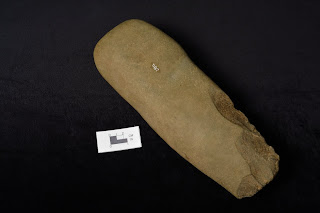 The cache feature demonstrates that celts and axes were being made by the same people and were used during the same time period. However, the obvious question is why were these artifacts from Feature 26 neatly stacked, placed in a hole and never retrieved? They probably represent 50 to 75 hours of work. This cache inspired us to build several dugout canoes but we will never know what was on the minds of the prehistoric technologists who left these behind over 4000 years ago.

We would like to thank Bob Smith (retired geologist from the Pennsylvania Geologic Survey) for identifying the lithic material types of these artifacts. He has helped us many times over the years and we sincerely appreciate his detailed descriptions of lithic types and where they may have originated.

Posted by PA Archaeology at 4:48 PM