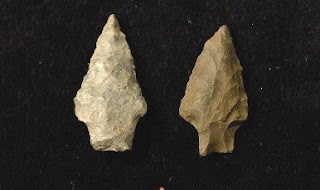 The Stanly projectile point type was described by Joffre Lanning Coe in 1964 in his definitive work The Formative Cultures of the Carolina Piedmont. Coe characterized it as having “a typical Christmas tree shape”. He found it within a deeply buried context at the Doerschuk site located in North Carolina and dated it to the Middle Archaic period at about 7000 years old.
The Stanly type is not particularly distinctive in that it is simply a straight stemmed point with a slight notch in the base (not to be confused with the sort of basal treatment indicative of the bifurcate point). Sometimes it is serrated but it does not have a ground base like many Early Archaic point types. As noted by Coe, Stanly points can be confused with points from later periods that have been re-sharpened. Coe felt that the point type had morphological parallels with the earlier Archaic Kirk type, thus suggesting a period of cultural continuity spanning two millennia.
Although not particularly common, the Stanly type is found at stratified sites as far west as the Ice House Bottom site in Tennessee and as far north as the Neville site in New Hampshire. It is stratigraphically found above bifurcate points but below Morrow Mountain/Stark points, both broad bladed stemmed points. The Neville site was excavated by Dena Dincauze who felt that the projectile points found there were slightly different from Coe’s definition for the Stanly type and named them Neville points. At the Neville site the point type was associated with atlatl weights and full-grooved axes. Using carbon 14 dating of charcoal, she was able to bracket the component to between 7015 and 7740 years ago. 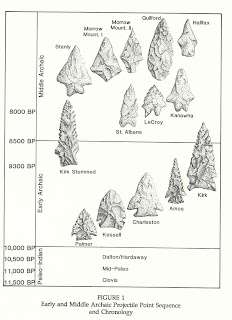 The largest stratified Stanly site in Pennsylvania presently known, is the West Water Street site (36Cn175) in Lock Haven along the West Branch of the Susquehanna River. This was excavated by Dr. Jay Custer of the University of Delaware. He recovered a total of 47 Neville/Stanly points which represents over 80% of the Middle Archaic points from the site. The occupation at West Water Street was dated at 7390 + 110 years ago (Beta-63528). The makers of these points where not especially discriminating when selecting lithic materials and instead used whatever was locally available. This is in clear contrast to what was the norm for Early Archaic people who frequently traveled great distances to acquire better quality lithics for making projectile points. As well, based on lithic utilization, their territories were smaller, perhaps half the size of Early Archaic territories. Other stratified sites producing Stanly/Neville points in Pennsylvania include, the Memorial Park site also in Clinton County, and the Treichlers Bridge site located in the Lehigh drainage of Northampton County. 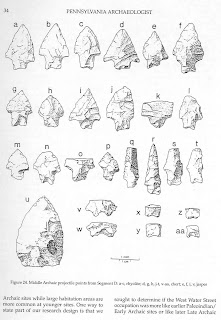 One would have to agree that the name “Christmas Tree”, whether it be a formal designation for a projectile point type or a Yule tide symbol, has been around for a very, very long time. 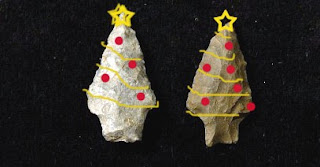