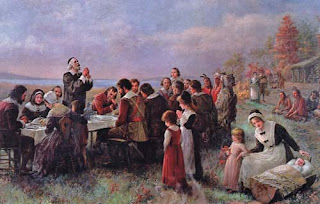 Once again we turn our thoughts towards Native peoples and the first Thanksgiving celebration. Last year when we wrote this blog we discussed the three sisters, corn, beans and squash and their likely spot on the table. This year, our focus will turn to the main course of the celebration on most dinner tables in the United States for at least the past 100 years- the Turkey. Thanksgiving did not become a National Holiday until 1863 when President Lincoln issued a proclamation declaring the date as the last Thursday in November.
Much has been written about the foods served at the first Thanksgiving and a record of the event published in 1622 (Mourt's Relation)refers to the gathering of “fowl” which likely included wild ducks, geese, quail and other game. The pilgrims referred to all birds as “fowl” and did not make a distinction of turkey so we can not determine with any certainty if turkey were actually part of the celebration.
Archaeological excavations have yielded the faunal remains of turkey (Meleagris gallopavo) at most Native American sites of the Late Woodland period. An interesting assemblage from the Eschelman Site, Lancaster County provided evidence of the butchering and processing methods employed by Native peoples. Eschelman Site was the midden or “garbage dump” site for the Susquehannock Washington Boro Village which dates from approximately 1600-1625. The population estimate for this village is roughly 1700 (Kent 1984) based on archaeological evidence of house size and stockade lines. This was a fairly large population which would have required a varied food supply.

The species present in this assemblage include the usual deer, bear, beaver raccoon and turkey to identify a few of the more dominant. Formulas that have been developed for estimating “minimum numbers” (MNI) of species were employed in producing the following data.

Butchering marks visible on the faunal assemblage indicate that turkeys were either skinned or plucked and then butchered to remove heads, feet and wings at the shoulder joint. The bird was then placed whole in a pot until the meat was removed and the bones were “boiled clean”. No cut marks were present on femora, dorsal vertebrae or sternums and no charring or scraping marks were visible. 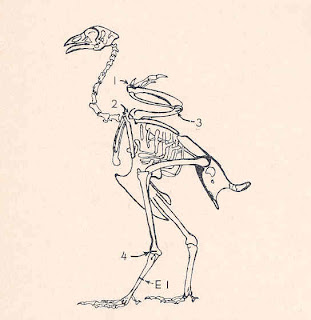 The relatively high number of turkey available in this collection brings about the question of whether this is a normal or high percentage in comparison with other Susquehannock sites. Of the analyzed data available it would appear that this is a higher than normal percentage of turkey represented. The following table compares the minimum number of individuals (MNI) for each of the five taxons previously identified in the assemblages from four Susquehannock sites.

While the data suggests that turkey played a larger role in the diet of Native peoples in the period from 1600- 1625, it is also understood that the assemblage from Washington Boro, the Eschelman midden site may contain a larger sample size due to the nature of the site. The pattern though does raise some interesting questions in the role of village size and demand on the turkey population. Strickler site population is estimated at 2900 (Kent 1984) an increase of 1200 people since the Washington Boro site. The population of Susquehannocks declines after about 1660 and estimates drop to 900 individuals for the Byrd Leibhart site. Could demand have exceeded supply and thus fewer birds were available to the residents of Byrd Leibhart?

Historic accounts document over hunting of turkey by early settlers which led to a rapid decline in the species. By the early 1800’s the population was almost eradicated as hunters harvested them without any regulation. The remaining birds were found in the central counties in the ridge and hill top woods of Pennsylvania. Demand for lumber and the resulting stripping and deforestation of “Penn’s Woods” further decimated the flock.

The creation of the Pennsylvania Game Commission in 1895 and efforts to regenerate forests saved the estimated few thousand birds from complete extirpation. It was not until 1905 that a limit of one turkey a day for a six week hunting season was introduced. Various methods were employed over the next fifty years including the raising of turkeys by the Commission for release and wildlife management practices. This increased regulation and population supplements led to the first state wide hunting season in 1954. Ten counties did not have a natural population of turkey and those areas were supplied with “game farm raised” turkeys. Careful control over the next fifty years and the “trap and transfer” program implemented by the Game Commission restored the turkey population and led to the elimination of turkey farms operated by the Commission. 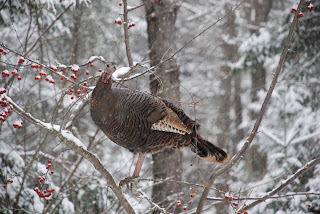 Whether the turkey was actually part of that first Thanksgiving is debatable, but what is not in question is its important role in the history of this Commonwealth. Most of us will partake of a turkey from our local grocer or farm market, but for those lucky enough to bag a wild turkey be thankful for the foresight of the Commission in preserving these impressive birds. The following quote from Ben Franklin summarizes the majesty of this bird and his rightful place in history-

Ben Franklin wrote to his daughter regarding his disappointment that the Bald Eagle was chosen over the turkey as the National Bird.

"For the Truth the Turkey is in Comparison a much more respectable Bird, and withal a true original Native of America . . . He is besides, though a little vain & silly, a Bird of Courage, and would not hesitate to attack a Grenadier of the British Guards who should presume to invade his Farm Yard with a red Coat on.” 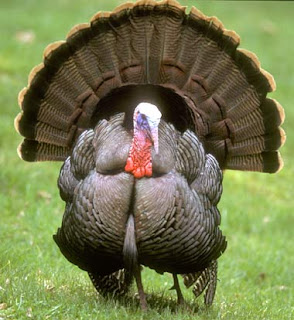 For more information, visit PAarchaeology.state.pa.us or the Hall of Anthropology and Archaeology at The State Museum of Pennsylvania .
Posted by PA Archaeology at 2:13 PM