A Picture into the Past of Clearfield County 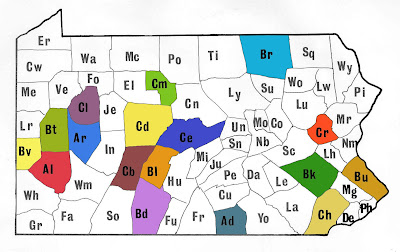 This week we return to our archaeological journey by county to Clearfield, still in the in northwestern section of the state. Clearfield County is surrounded by several of the counties covered in our previous blogs including Cambria, Cameron, and Centre. Located in the Appalachian Plateau physiographic province the area is composed of steep ridges and valleys. These stream valleys provided transportation routes through the rough terrain for Native groups settling in the region. The West Branch of the Susquehanna River flows through the county and provided native groups with access to additional trade and transportation routes. The floodplains and terraces of the plateau region provided fertile soils to support plant foods and game animals important to the subsistence of Native peoples. There are 113 sites recorded in the Pennsylvania Archaeological Site Survey Files (PASS), an average of only one site every ten square miles.

Evidence of native peoples in Clearfield County have been recovered dating as early as the PaleoIndian period (10,000-16,500 years ago), but the majority of prehistoric sites date from the Archaic period (10,000- 4,300 years ago) through the Early Woodland period (2,700- 2,100 years ago). The Archaic period marks a time of abundant food sources in the form of nuts, berries and wildlife; it also is a period of increased populations. Archaeologists believe that bands came together seasonally for food procurement activities such as nut harvesting or fish migration. 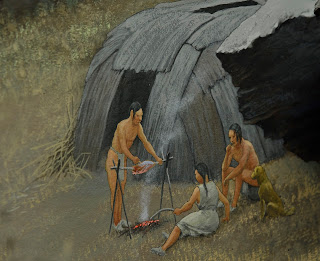 Archaeology conducted for a PennDOT bridge replacement project on Lick Run produced archaeological data indicating a Middle Archaic occupation with dates of ca. 7530 and 8210 BP. The wide variety of activities in the Early Archaic component of the site, along with the higher artifact density, indicates a base camp.
﻿
﻿
﻿
﻿
﻿
﻿
The Transitional period component of the site was represented by a narrow range of activities which indicated a special-purpose camp for processing game Archaeologists also identified seven prehistoric features, three of which dated to the Clemson Island/Owasco phase of the Late Woodland. Woodland occupations were above and mixed within a buried A horizon. These seven features produced radiocarbon dates between 900 and 1130 BP. The presence of ceramics and cooking features in the Woodland Period occupations suggests occupations by family groups, although for relatively short periods of time.

Clearfield’s position on the West Branch of the Susquehanna likely played an important role in the procurement activities represented at this site and others in the Appalachian Plateau especially due to its location on an important transportation route. The Great Shamokin Path ran from the Forks of the Susquehanna River at Sunbury to Kittanning on the Allegheny River. This path ran east and west across the state and was an important route not only for Native Americans, but eventually for colonists. The town of Clearfield is located along this path and was known by Native peoples as Chinklacamoose. This town was identified as a Delaware Village dated to 1751 in the publication “A Map of 18th Century Indian Towns in Pennsylvania” (Kent et al 1981: Table 1). During the French & Indian War, reports of Indian raids throughout the region prompted British troops to patrol this area. Historic accounts of Chinklacamoose indicate that when troops from Fort Augusta, located at present day Sunbury, visited the site in April of 1757 they found Chinclacamoose deserted and burnt. The Frankstown Trail which also passed through this village was used to transport captives taken in the raids of the Cumberland and Susquehanna Valleys to Native villages on the Allegheny and other western rivers. The county remained unsettled for several years after the end of the French & Indian War and the first reported settlement was in 1784 by Captain Edward Rickets in the area of Coalport.

The rugged terrain, dense forests and few transportation routes contributed to the slow development of Clearfield County. In 1804 the opening of the Erie Turnpike from Milesburg, Centre County into Erie County allowed for easier transport of the first industry in the county- lumbering. Saw mills developed in the region and after initially clearing the valleys close to the streams of white pine, they moved to the mountains and harvested hemlock. This lumber was then either rafted or floated downriver in log drives as sawed or raw lumber. The town of Williamsport on the West Branch of the Susquehanna was a hub for lumbering activities until the forests were depleted in the late 19th century.

Archaeology associated for the previously mentioned bridge replacement project also looked at the historic development of the community of Lick Run. Ellis Irwin and his brother William purchased a partially constructed sawmill, mill and dam across Lick Run in 1856. The Lick Run and Sinnamahoning Turnpike Road Company was incorporated in 1854 to build a road from Lick Run to the Sinnamahoning. This allowed for the development of a community comprised of the Irwin homes, mill complex, school, store and a blacksmith shop. An archaeological investigation conducted at Lick Run prior to the construction of a new bridge recovered personal effects such as buckles, buttons, jewelry and pipe fragments representing members of the Ellis Irwin household. Excavations of the house foundation and well produced a collection of household artifacts suggesting middle class economic status for the occupants.


﻿
﻿
The remaining historic components of the site consisted of a blacksmith shop, a mill race, and stone steps. Historic deposits encountered during data recovery excavations in the side yard included five historic features and a light scatter of historic artifacts. The features included an historic postmold, a stone pavement, a rock cluster, and two trash pits. Artifacts consisted primarily of architectural debris, container glass, and a small number of ceramics.

The archaeology conducted at this site and many others across the Commonwealth aid archaeologists in examining the past and recreating a picture of our heritage. The history books may have recorded the mill at Lick Run, but it didn’t record the details of everyday life for the Irwin family. The tangible evidence of peoples before us help us to analyze changes in social structure, patterns of movement, consumerism and multiple other indicators of human activity. Preserving our archaeological heritage benefits all of us and we hope you will be inspired to learn more about the archaeology of your county and to help us preserve and protect our archaeological heritage for future generations.


We have a brief follow-up report on the mock archaeology project at Cedar Cliff High School reported on in last week’s blog. Archaeologists at the State Museum assisted students this week with their final excavations. Students are busy looking at the artifacts recovered and analyzing their findings and preparing a report of their conclusions. A brief session on curation was provided to the students so they could learn about the importance of retaining provenience information for each artifact and preparing collections for long term curation. The students learned a lot and demonstrated an applied knowledge of archaeology both in the field and the classroom. Our thanks to Mr. Dan Reilly for inviting us to participate in this educational outreach program.

Cedar Cliff students in action at their mock dig site

1928. A History of the Indian Villages and Place Names in Pennsylvania. Pennsylvania Historical Commission. Harrisburg.


For more information, visit PAarchaeology.state.pa.us or the Hall of Anthropology and Archaeology at The State Museum of Pennsylvania .
Posted by PA Archaeology at 1:53 PM