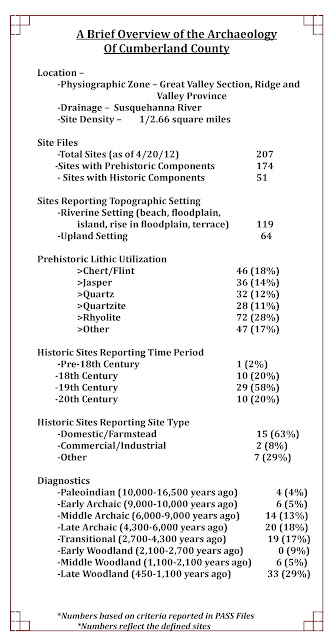 This week our travel through the archaeology of the Commonwealth by county takes us to the last of the C’s –Cumberland County.  The terrain here is characterized by its setting in the Great Ridge and Valley province it resides in, low rolling hills and a broad valley floor. This terrain provides rich soils along floodplains to support a range of flora and the rolling uplands offer forests comprised of oak, chestnut, hickory as dominate with maple, white pine, cherry as some of the secondary components. Fauna include whitetail deer, bear, beaver and during prehistoric times included elk, martins and fishers.  This setting provided a habitat desirable to Native peoples as early as the Paleoindian period (16,000-10,000 years ago) as evidenced by at least one fluted point found in a low swampy area along the Yellow Breeches. The lithic resources available to Native peoples for tool production included quartz, sandstone and metarhyolite from quarries in the Blue Ridge Province at South Mountain.

Archaeological evidence of Native peoples in this county is apparent in the relatively high number of prehistoric sites, 174 out of a total of 212 sites that have been recorded for the county, which equates to one site every 2.63 miles. The Archaic period and the Transitional period are represented primarily by short-term processing camps and lithic reduction sites. An investigation conducted for a sewage treatment plant in Hampden Township yielded evidence of resharpening of tools utilized in the processing of large mammals, possibly deer or elk. This period is typically marked by small bands of people coming together to hunt and fish seasonally, and processing foods at these camp sites. The greatest number of sites represented in the prehistoric period is from the Late Woodland (1,100 to 400 years ago). This period is marked by a shift to intensive horticultural practices and larger, more permanent settlements.


A discovery in Camp Hill in 1936 while excavating a basement for a new home provided a glimpse into early food preservation practices of Native groups. A large storage pit which measured 52 inches wide at the bottom, 33 inches at the top and was five foot, ten inches in length was uncovered. Newspaper accounts which reported the discovery lists the content of this bell shaped storage pit as charred corn and a grass mat or shallow basket. A small quantity of this charred corn resides in the collections at The State Museum. The homeowners recognized the significance of this storage pit feature and preserved it in the foundation wall of their home, which still survives today.

A recent archaeological investigation conducted in Lemoyne Borough on a summit overlooking the Susquehanna River produced further evidence of site use by Native peoples during the Late Woodland. This site is only a few miles from the storage pit described above. The Lemoyne site (36Cu194) has provided archaeologists with evidence of a Susquehannock site dating between 1575 and 1625 A.D. This site uncovered a small section of a palisade, possible house structures and silo and bell-shaped pit features. Floatation of the contents of these pit features produced evidence of corn, beans and squash- known as the “Three Sisters”.  They also provided evidence of subsistence based on these crops and local resources such as fish and deer. This allowed archaeologists to compare processing methods at this site with faunal remains from previously excavated sites in the lower Susquehanna Valley. One of the differences identified was the lack of any evidence for axe butchering marks, a possible indicator of a culture change in either the availability or function of axes. The archaeology conducted at this site has helped create a more accurate picture of the Susquehannock settlement pattern in the lower Susquehanna Valley , but at the same time it also raises questions for archaeologists that can only be answered through further research and analysis. Dietary evidence recovered at this site has provided a more complete picture of the subsistence practices of the Late Woodland and early 17th century periods. The careful excavation methods employed at this site allowed for extensive analysis that is not always possible when sites have been destroyed by development or looters. The curation of this collection will permit further analysis in the future as archaeologists continue to examine culture change and settlement patterns in the area.


It is almost unimaginable as you drive through the maze of traffic and development to think that only 250 years ago Cumberland County was considered the western frontier. The county was formed in 1750 in response to a petition from settlers in the western portions of Lancaster County who pleaded that the distance to courts in Lancaster created undue problems for them. They argued that they needed the courts to protect them from the “idle and dissolute” who escaped to the wilderness of the western regions. Cumberland County became only the sixth county in Pennsylvania. One of the early settlers of this region was George Croghan whose property became the site of an archaeological investigation in 1988 for an I-81 Connector Project.


Croghan was a land speculator and Indian trader. Early records indicate he owned approximately 800 acres on the Conodoguinet Creek by 1748, he owned 200,000 acres surrounding Pittsburgh and he had rights to more than a million acres from Pittsburgh to Erie. Croghan operated trading posts in multiple locations and because of his experience with Native peoples was identified as a negotiator for the Provincial government in dealing with Indians in the western portion of the state. Historic background research of the Croghan/Weibley site (36Cu105) revealed that Croghan only retained the property until 1751 when he sold it and the land continued to change owners. The property was utilized as a farm and a woolen factory with a connected oil mill. Improvements included the construction of a brick house and stone barn. Archaeological investigations also uncovered a Late Archaic component, in addition to a 19th century farmstead.

This western frontier of Pennsylvania underwent a great deal of change in establishing the settlements of the county. The Native peoples who occupied the region prior to European settlement were being forced from the lands they had traditionally hunted and fished upon. The new settlers wanted the lands for farming and expansion away from the crowded southeastern portions of the state. This settlement conflict resulted in the construction of multiple stockade forts for protection from Indian raids on settlers. Carlisle, the present day county seat was the site of Fort Lowther as early as May, 1753. Raids throughout the entire “western frontier” attributed to the construction of forts including Fort Morris in 1755.
﻿﻿
﻿﻿
Archaeology conducted at this site by Stephen Warfel has provided evidence of the fort in the form of personal effects, military equipment and dietary remains. The exact location of Fort Morris has eluded researchers for years, but archaeology conducted in 2008 and 2009 supplied direct evidence of the fort. Archaeological evidence revealed soil features, including a stone lined cellar, and artifacts datable to the fort time period.


French & Indian War research has been an important focus of the Pennsylvania Historical & Museum Commission. Our excavations at Fort Hunter and previous excavations conducted by the Commission at Fort Loudoun and Fort Augusta contribute to our understanding of this turbulent period in Pennsylvania history. The Workshops in Archaeology program scheduled for November 3rd will focus on this period of change from the Contact period through the end of the French & Indian War in 1763. We hope you will mark your calendars to join us as archaeologists from around the state present their findings of these significant sites. We hope you have enjoyed our trip into the archaeology of Cumberland County and we have inspired you to learn more about the archaeology of your county. Preserving our past benefits each of us, we hope you will help us in protecting and preserving the archaeological heritage of our Commonwealth.


All References for this week's blog are from the Unpublished Manuscripts File of The Section of Archaeology, The State Museum of Pennsylvania.

The Discovery of Fort Morris: A Report on 2008 Archaeological Investigations at the 333 E. Burd Street Site, Shippensburg, PA. 2010.

For more information, visit PAarchaeology.state.pa.us or the Hall of Anthropology and Archaeology at The State Museum of Pennsylvania .
Posted by PA Archaeology at 4:19 PM