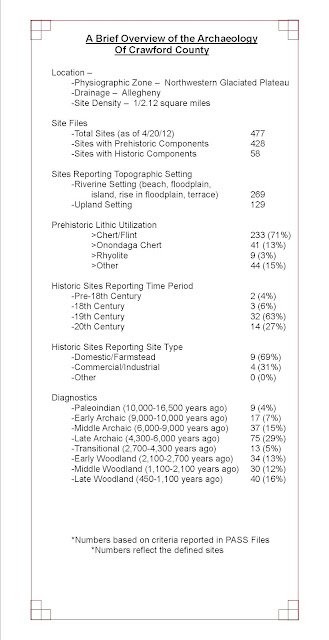 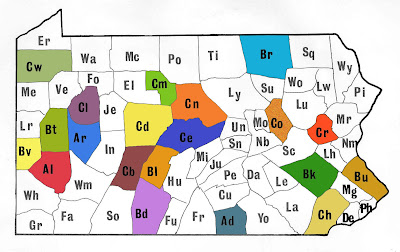 This week we move to the northern reaches of the Allegheny drainage basin and the glaciated Appalachian Plateau. Crawford County has a relatively high density of sites compared to other counties and there have been a number of significant excavations. In western Pennsylvania there are a variety of different chert sources that were used prehistorically and this material supplies 71% of the toolstone used in the county. In addition, Onondaga chert was commonly used in the Upper Allegheny basin and contributes 13% of the raw material for stone tools. The source for this material is the Onondaga chert quarries near Batavia, New York. Cobbles of this material were transported south by the glaciers from western New York. The high quality of Onondaga chert made it highly desirable and pebbles were even used by creating bipolar cores. Surprisingly, metarhyolite from the South Mountain region (a distance of 300 km or 180 miles) is also present.
Much of the county was covered by glaciers up to about 14,000 years ago and the retreating ice formed many lakes. These lakes have yielded the remains of Pleistocene megafauna and several mammoth elephant sites have been recorded. Scuba divers initially located the remains and brought them to the surface. A few samples were properly conserved but the bone and ivory that was not, quickly dried out and all but disintegrated. A more detailed examination of the sites revealed that the skeletons were disarticulated and badly crushed, probably by ice. 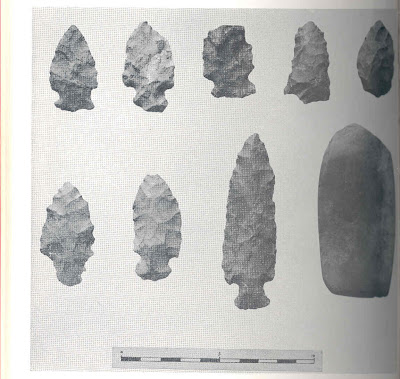 Image of artifacts from the Lawson Mound

One of the earliest reports in the Pennsylvania Archaeologist concerning the archaeology of Crawford County was by Edmund Carpenter (1950). He briefly reported on six burial mounds in Crawford and Erie counties. They were all very similar in size and construction consisting of earth and boulders or just boulders. The Lawson Mound measured approximately thirty-two feet in diameter and approximately four feet high although it had been leveled by farming activities. It contained a cache of 8 chert projectile points and a double-bitted celt made of slate. The Nelson Mound (36Cw58) was excavated by Harry Schoff (Carpenter and Schoff 1951).  This contained two burials in separate stone cists and the remains of one was cremated. The cremated burial contained a red ochre stained cache of eleven Flint Ridge Chalcedony blades. A lump of graphite and a gray mass of what was once “probably powered graphite that had solidified and now showed the shape and folds of the pouch that once encased it” was also recovered. Nine of the blades were re-fitted and illustrated the shape of the original core. The second burial was flexed and consisted of “badly decayed” skull fragments, teeth and long bones. It was associated with two large sheets of muscovite, a crude slate pendant and a piece of red ochre. 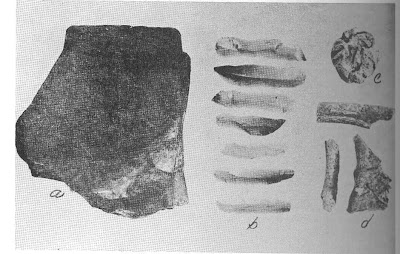 Image of artifacts from the Nelson Mound 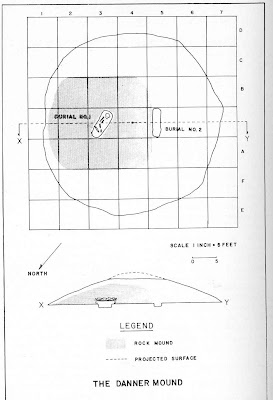 Diagram of the Danner Mound

Finally, the Danner Mound (36Cw4) was excavated by Neil Clark, Stan Lantz and Bill Robinson with assistance from the Eriez Chapter of the Society for Pennsylvania Archaeology.  The remains of three burials were recovered although there were indications that others were present but had completely disintegrated.  Grave goods consisted of copper crescents and beads, a polished slate gorget, a celt and two undrilled pendants. These mounds all date to the Squawkie Hill phase of the Middle Woodland period (1850 BP. -1550 BP.).  The people who built these mounds seem to be trading with the Hopewell culture (or Interaction Sphere) to the west but not much is known concerning their habitation site.

The McFate site (36Cw1) is arguably one of the most significant sites excavated in the county (see also the Wilson Shutes site (36Cw5), another significant McFate phase excavation from Crawford County). This site was excavated by Harry Schoff in 1938 as part of the Works Projects Administration (WPA) initiative and sponsored by the Pennsylvania Historical Commission. The site is situated on the floodplain of French Creek, adjacent to the Nelson Mound (but unrelated). It is actually three overlapping villages – Village 1 with three palisades, Village 2 and 3 with double palisades. Schoff carefully mapped the palisades, houses, burials and 448 storage/processing pits. Between 1966 and 1972, the Cussewago Chapter of the Society of Pennsylvania Archaeology, led by Frederick E. Brown conducted additional excavations at the site, exposing Village 3.
Village 1 is 120 by 197 feet in diameter. A trench was created on the inside of the inner palisade and the earth was used to support the palisade posts.  The village contained circular houses averaging 19 feet in diameter. There were also several storage/processing pits. Semi-detached, post-lined, semi-subterranean storage structures were found with many of the houses. 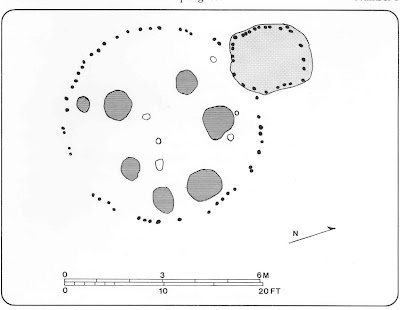 Schoff recorded the contents of each of the pits. Many contained well preserved organic materials such as bone, corn cobs, nut shells, grass pit linings, a fragment of a fiber net (link to blog 6/24/11) and a charred cord wrapped paddle for shaping pottery. The latter is the only example known from the Eastern United States (Burkett et al. 1997). The most common tools are triangular projectile points, pitted stones, hammerstones, bone and antler chisels and celts. Surprisingly, flakes from the production of stone tools were not common and it would seem that stone tool production did not take place near the pits. Considering all of the posts that were made for the palisade, houses, drying racks and storage structures, wood working tools were common. Along with the celts listed above, beaver incisor chisels were also found. Trumpet shaped smoking pipes are also common at McFate and other sites that contain McFate Incised pottery. 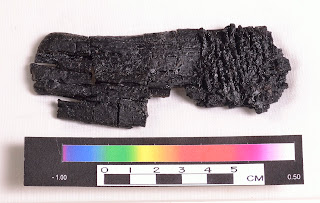 The pottery from the McFate site has been classified into three types suggesting the three villages were occupied over a period of at least two hundred years. The latest type was defined by William Mayer-Oakes (1955) based on the ceramics from this site and is called McFate Incised. This is a shell tempered ceramic with incised line motifs of opposing triangles filled with parallel horizontal lines set off by parallel oblique lines on medium to high collars. This pottery is concentrated in the Upper Allegheny (link to blog 6/8/12) but also in the Lower Allegheny basin associated with Monongahela sites. McFate pottery is believed to represent an Iroquoian culture that migrated into southwestern New York and northwest Pennsylvania. By AD 1550, it seems to disappear and the region is abandoned by Native Americans as a habitation area. 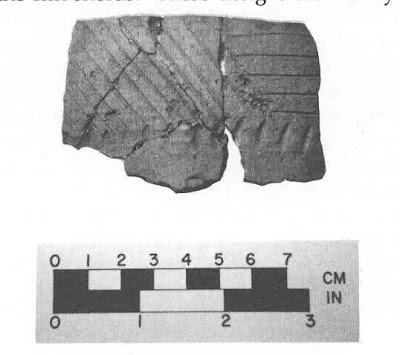 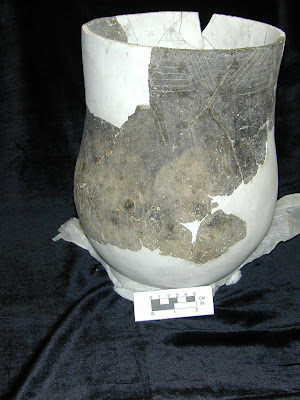 Image of McFate pot and sherd

The field notes, Schoff’s unpublished manuscript, photographs of the excavation and the artifacts from his excavation are curated at The State Museum of Pennsylvania. Unfortunately, in 1972, the site was graded for a housing development and completely destroyed.
We hope you’ve enjoyed this glimpse into the archaeology of Crawford County and that it inspires you to learn more about the archaeology of your county. When visiting Crawford County, be sure to visit Drake Well in Titusville to get a glimpse of the earliest oil well in the United States. The near-by boom town of Pit Hole will give you an idea of life in northwestern Pennsylvania during the “rush to drill”. The resources of the county are Pennsylvania’s heritage and for all of us it is our window into the past. Please help us preserve these important resources by reporting and recording your archaeological finds while we all Preserve our Past for the Future. (link toGIS web site)

For more information, visit PAarchaeology.state.pa.us or the Hall of Anthropology and Archaeology at The State Museum of Pennsylvania .
Posted by PA Archaeology at 3:29 PM