Jack’s Reef Pentagonal and Jack’s Reef Corner-notched points are distinct markers in the prehistoric archaeological record of the Middle Atlantic (including Pennsylvania), the Midwest, and the Northeast. The angled blade margins create four sides with a straight or slightly concave base. The base creates a fifth margin in both the pentagonal and corner-notched forms. Concurrently in northwestern Pennsylvania and parts of the Midwest, the Raccoon-notched point variety, a smaller pentagonal point, was also utilized and is sometimes found in the same archaeological contexts as slightly larger Jack’s Reef points. 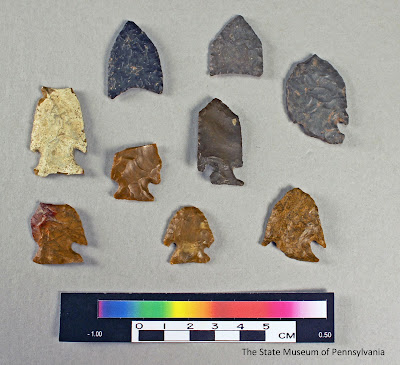 It is interesting that the Jack’s Reef style or type was used for a relatively short span of about 500 years (950 - 1450 BP) but over a large geographic area (from Michigan to Maine) by many different Native American groups. It is the generally agreed that these very distinctive projectile points represent the widespread incorporation of the bow and arrow into the prehistoric tool kit about 1500 years ago (Justice, 1987). Triangle points have been found as early as Middle Archaic contexts in Pennsylvania and other states, indicating that bow and arrow hunting technology may have been used prior to the Woodland period. However, these early triangles are not common and it is unclear if they represent bow and arrow technology. The relatively larger projectile point styles and the presence of bannerstones in Archaic contexts support the assumption that spears and atlatl darts were the primary implements used in hunting activities prior to the presence of Jack’s Reef points.

They are produced using a refined pressure flaking technique to create a flat thin blade or flake blank which is further refined with pressure flaking. Recent excavations in Virginia and Delaware have uncovered flake cores used to create Jack’s Reef preforms. The technique is described as “pseudo- Levallois” or “Levallois-like” (Lowery 2013; Walker 2013, New Jersey). While other core techniques may have been used to create Jack’s Reef Points in other regions, including parts of Pennsylvania, the point pictured below was also made from a flake blank, rather than a bifacial preform. The smooth ventral surface of the original flake from which this point was made is clearly visible. 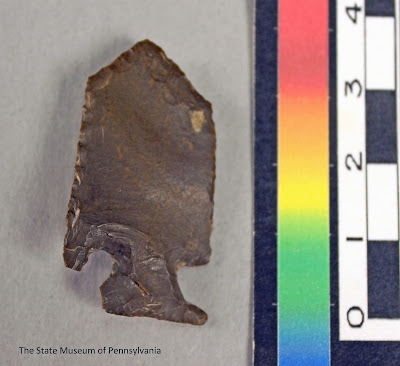 Jack's Reef points were preferentially made from cryptocrystalline lithic materials, predominately high quality local chert in western Pennsylvania and local cherts as well as Hardyston jasper in the Susquehanna and Delaware River basins. McCounaghy (2013) concludes the reliance on local source material and the wide spread adoption of the Jack’s Reef point style by different cultural groups throughout Pennsylvania is evidence that the introduction of this point style does not represent a mass migration of people, but rather the diffusion of ideas through cultural interaction between existing populations.

As an example, in the Ohio drainage of western Pennsylvania, Jack’s Reef points are utilized by two distinct groups, the Late Watson Farm in the southwest and Allegheny River cultures in the northwest. Both the Late Watson Farm and Allegheny River complexes demonstrate continued influence and interaction with the post-Hopewellian cultures of the Ohio valley. Archaeologists specializing in the Midwest tend to use a different set of chronological terms for this time period, placing the end of the Hopewell sphere of influence around A.D. 400 as the end of the Middle Woodland. Therefore in western Pennsylvania literature, Jack’s Reef points are classified as Late Woodland (McConaughy 2013). Obviously, this has created some confusion in the archaeological literature. In eastern Pennsylvania, this cultural period is commonly referred to as the late Middle Woodland. Jack’s Reef points are associated with the early and middle Clemson Island culture in the West branch and Juniata Valley of the Susquehanna River basin, and the Abbott Farm Complex of the lower Delaware. 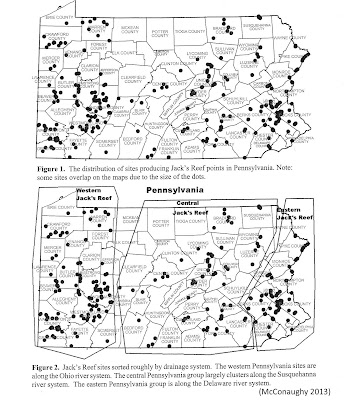 It is widely theorized that the adoption of the bow and arrow co-occurred with the intensification of food production using weed seed plants of the Eastern Agricultural Complex (EAC) as well as potentially experimenting with maize horticulture. However, the current understanding of this pivotal time period—the transition from a foraging life style to one of intensive maize horticulture, in villages with complex tribal social organization—is limited by the paucity of the archaeological record. Relatively speaking, very few sites have been recorded for this time period as compared to the preceding Late Archaic and subsequent Late Prehistoric/Late Woodland periods.  Additionally, very few of those sites recorded have been systematically excavated with particular emphasis on recovering the floral and faunal record. 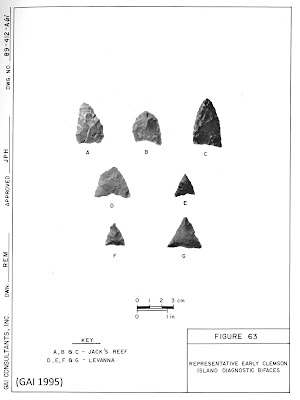 One exception is the Memorial Park site (36Cn164) in Lock Haven on the West Branch of the Susquehanna River. Jack’s Reef points are associated with the early and middle Clemson Island cultural components at this site. It is characterized as a multi-component small hamlet with numerous features. Flotation analysis demonstrated a dietary reliance on nut resources (hickory, walnut, butternut, acorn and chestnut) as well as some of the earliest evidence of maize in addition to the utilization of domesticated weeds seeds (little wild barley, chenopod, amaranth, smartweed, and sunflower seed). Unfortunately, the faunal analysis grouped all Woodland deposits together. However, white-tailed deer and fish, including sucker, catfish and perch, were major dietary components of all Woodland period hunting and fishing activities recovered at the site. (McConaughy 2013; Hart & Sidell 1996; GAI Consultants, Inc. 1995) 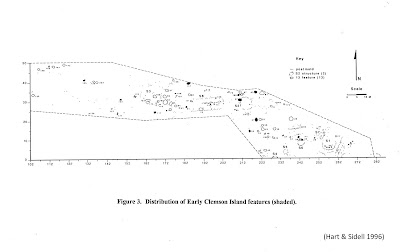 Jack’s Reef projectile points are an important temporal marker of a very interesting time of transition in Pennsylvania prehistory. A comprehensive summary of the larger historical and regional context of the Jack’s Reef phenomenon is available in the Eastern States Archaeology Federation (ESAF) publication, Archaeology of Eastern North America (AENA), 2013, Volume 41. It is a compendium of the papers delivered at the 2012 ESAF meeting, After Hopewell: The Jack’s Reef Horizon and Its Place in the Early Late Woodland Mortuary and Settlement Patterns in Northeastern North America.

For more information, visit PAarchaeology.state.pa.us or the Hall of Anthropology and Archaeology at The State Museum of Pennsylvania .
Posted by PA Archaeology at 4:43 PM