This week in Pennsylvania archaeology, we are going to take a look at important aspects of field work that make or break a project’s use for future research. We will do this by looking at the Zimmerman site, a site that was described in a previous blog that highlighted the excavators, their excavation methods and the importance to our work. For more information on the this site, see our previous blogs titled, In Memorium, Fredrick Assmus January 6, 1946-October 14, 2012, The Werner Collection and the Archaeology of Pike County.
Many of the State Museum’s archaeology collections have been donated by amateur archaeologists who are doing their part to further archaeological research.  One group who did this is Lenape Chapter 12 of the Society for Pennsylvania Archaeology (SPA). Chapter 12 conducted a survey of the proposed Tocks Island Reservoir area in the spring of 1962. Based on three positive test pits on Marie Zimmermann’s property, additional excavations were conducted beginning in May of 1962. Members of   the chapter  who worked on this site included Fred Assmus, William DeGraw, Frank Loux and David Werner.  Their excavations led to the discovery of a multi-component Late Archaic (4850-6850 BP.) through Late Woodland (1550 AD-1000 BP.) site.  A total of 409 features were identified including many small and large pits, hearths and postmolds. The Section of Archeology has inventoried David Werner’s entire donation (including 12,837 artifacts) and is half way through inventorying William DeGraw’s donation. There are currently a total of 13,397 artifacts and this count will increase as the remaining portions of William DeGraw’s and Fred Assmus’ collections are inventoried. 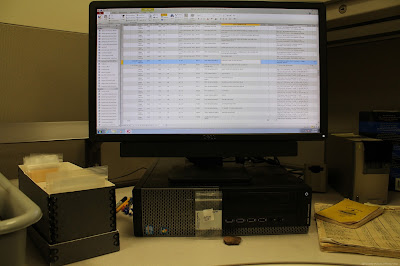 As demonstrated by the numbers listed above, this site was large and had the potential to provide a significant contribution to our understanding of how people lived in the past, especially from the Late Archaic through the Late Woodland period. The archeological site context is most important to our understanding of how and why artifacts were made and used and how humans interacted with one another and the environment. This is the reason that archaeologists map and record in-depth information of how, where and what is being excavated during the investigation.  The Chapter also recorded this site in the Pennsylvania Archaeological Site Survey files along with several other sites they had individually or collectively excavated.  Site recording is the first step in the cataloging process. Once the site is recorded in relationship to all other sites, settlement systems can be analyzed.
Chapter 12 went to great lengths to keep detailed notes. Specifically, David Werner diligently recorded and organized feature and artifact records, created artifact inventories and produced detailed maps of the site, which included feature and artifact locations. As noted above, this information is imperative to interpreting how the site was used and the activities that were conducted there. 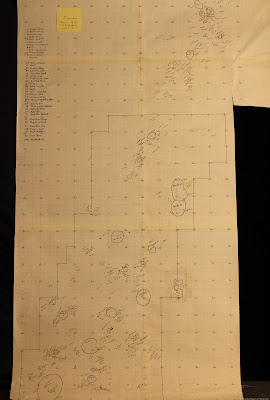 Mr. Werner’s work and organization is a fantastic example of how to record artifacts and features on a site. By creating site maps for each unit and each level of those units, Mr. Werner was able to identify the relationship between features and artifacts. In conjunction with artifact and feature records, field specimen inventories and Mr. Werner’s labeling system, maps and notes the process of creating the Section of Archaeology’s standard inventory was straight forward. This allows us to have collections ready for research sooner and with a known high degree of accuracy of artifact location and dating. In the Section of Archaeology we used to receive collections with limited provenience (the three deminsional location of an artifact or feature) information often, making these artifacts minimally useful in understanding how and why these objects were being used in the larger cultural context. Though each artifact has a story of its own, as archaeologists we need this context to accurately interpret and piece together the human experience through time. 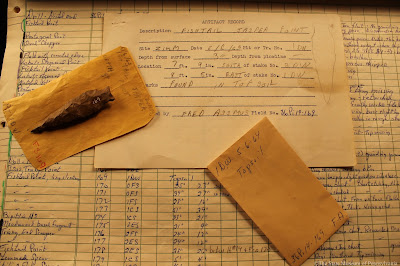 So, as archaeologists, we hope that future collectors may heed our words on the importance of provenience and making detailed notes, maps and even photos of where one is collecting artifacts. Then follow this with a catalog and artifact labeling method in a method that others can determine the provenience of the artifacts. The State Museum of Pennsylvania, Hall of Anthropology & Archaeology currently has a rotating exhibit highlighting individual collectors, their donations and the varying degrees of information given to us about the sites. This exhibit also provides information on useful tools for processing artifacts, such as how and what materials to use to best label artifacts. 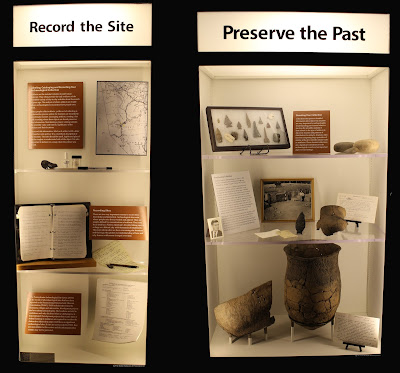 This exhibit will soon be changing from highlighting Fred Assmus, one of the excavators and donors of the Zimmermann collection, to Doris Freyermuth, another avid collector who did her part in providing good provenience information on collections from several sites in the Delaware Valley. These are just a few of the prolific collectors whose collections we have had the honor to work with and curate for the benefit of researchers.  To see more information on Freyermuth and others, please visit the State Museum now and in the future as we continue to change this exhibit.


We hope you have enjoyed learning how to organize and care for your archaeological discoveries and we encourage you to visit the CRGIS web site to record your site information.  If you would like to donate your collection for curation at the State Museum, please contact Kurt Carr at kcarr@pa.gov or Janet Johnson at janjohnson@pa.gov.  Help us to preserve our archaeological heritage by collecting responsibly and organizing/cataloging your discoveries. We ask you to join us in ensuring that our archaeological heritage is preserved by supporting public programs and preservation laws so that we can protect the past for future generations.