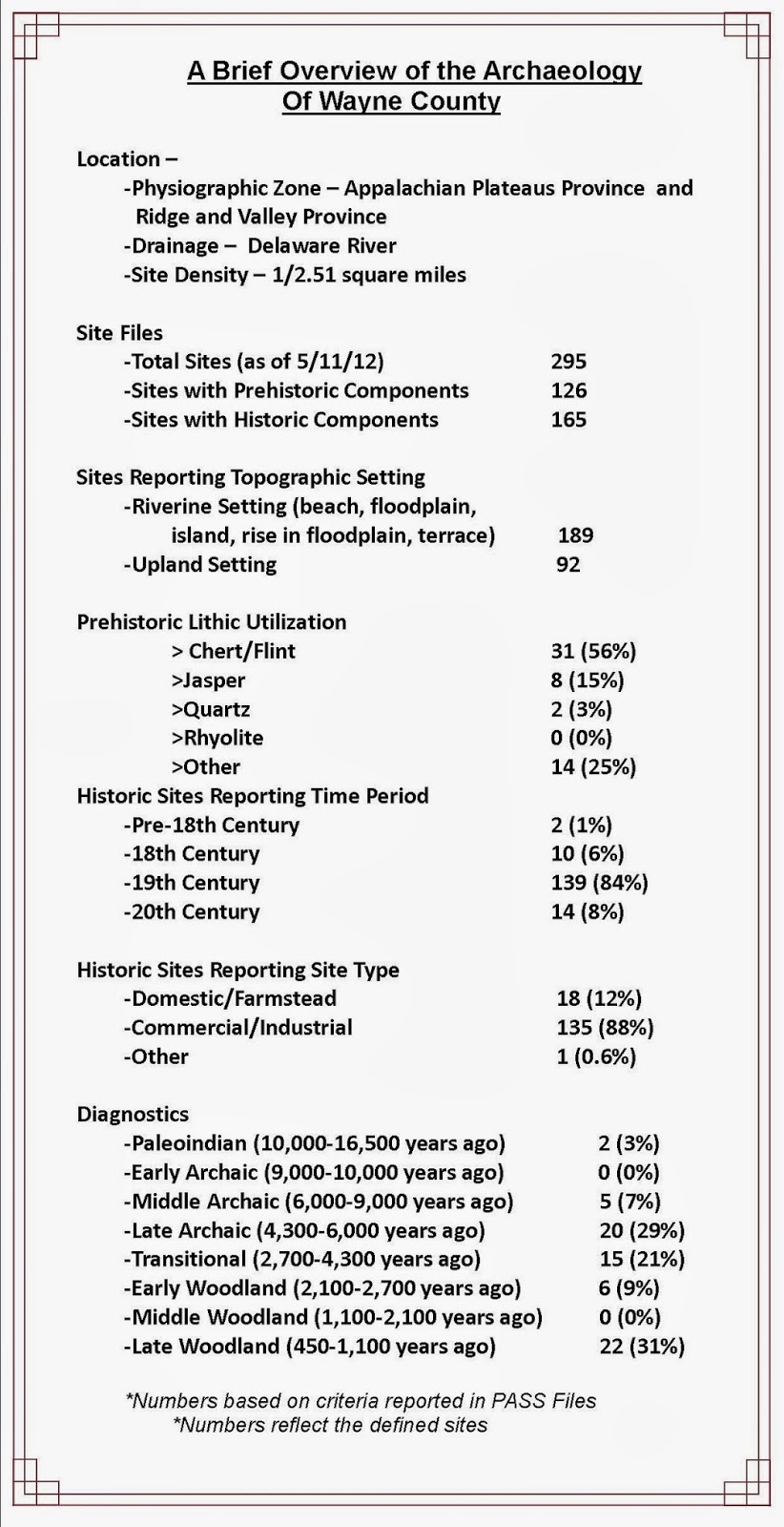 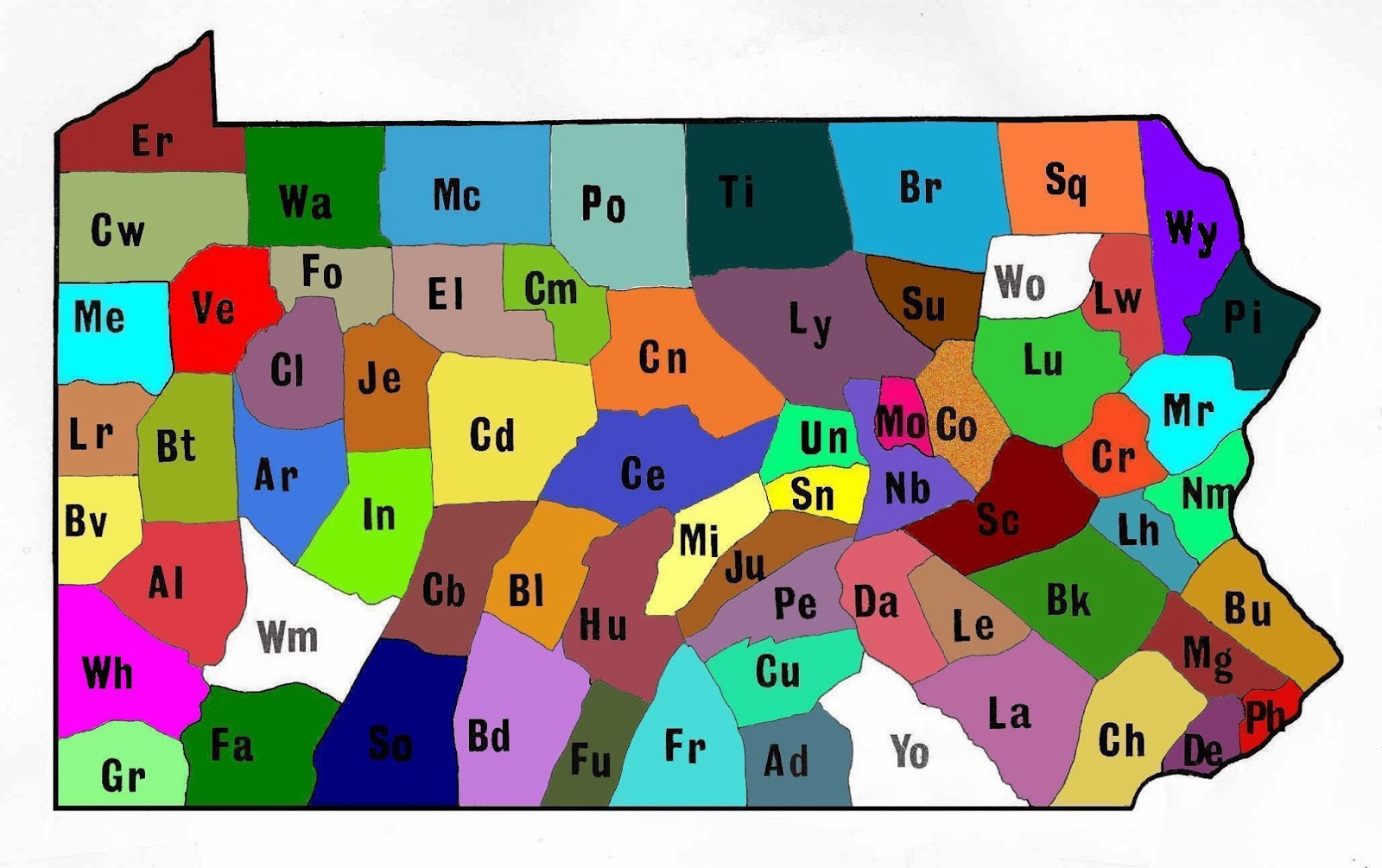 This week we return to our long anticipated county by county journey through Pennsylvania for a visit to the Northeastern region of the state in Wayne County.   Situated along the Delaware River on the border with New Jersey and New York, Wayne County has experienced rapid growth and development from spill over from nearby cities.

This region is in the Glaciated Low Plateaus Section of the Appalachian Plateaus Physiographic Province. The landscape is characterized by moderately   broad valleys separated by rounded hills.  The average winter temperature of 25 degrees is offset by summer temperatures averaging in the mid-sixties.  A check on the temperature for today shows a current temperature of 0 degrees with snow showers. Average snow fall is 57inches, but with the storms this winter they are likely well above average.

A quick look at the Pennsylvania Site Survey Files (PASS) reveals a relatively high number of sites for this fairly small county with nearly 300 sites recorded across all time periods.  Nearly two-thirds of the recorded sites fall within the riverine setting which includes floodplains and terraces an indicator of the important role that the Delaware River played in settlement, but other factors likely attributed as well.  What drew native peoples to this region and led to European settlement here during the 18th and 19th century?

The highest percentage of prehistoric sites recorded to date fall in the Late Archaic (4,300-6,000 years ago) and Transitional period (2,700-4,300 years ago). Archaeologists have observed changes in the environment during this period which ultimately led to changes in vegetation and settlement. The warmer climate of this period allowed for an increase in sustainable resources which resulted in population growth. To access these resources of nuts, berries and wildlife, native groups were drawn to specialized processing and procurement camps. Chestnut, oak, butternut, walnut and beech on the ridge tops along with maple, oak, hemlock and white pine in the lower valleys with an understory of blueberries and huckleberries provided valuable food supplies.   Witch hazel, viburnum, and hazelnut found in the understory of the wetter environs, reflect the greater availability of moisture.   The increase in available food sources and the rise in population also led to a greater demand for aquatic resources.  The glacial retreat which occurred in Wayne County led to an increase in water sources ranging from ponds and lakes to swamps, bogs and wetlands.  This generous supply of water and the ability to travel the Delaware River Valley provided ample resources for these early settlers. 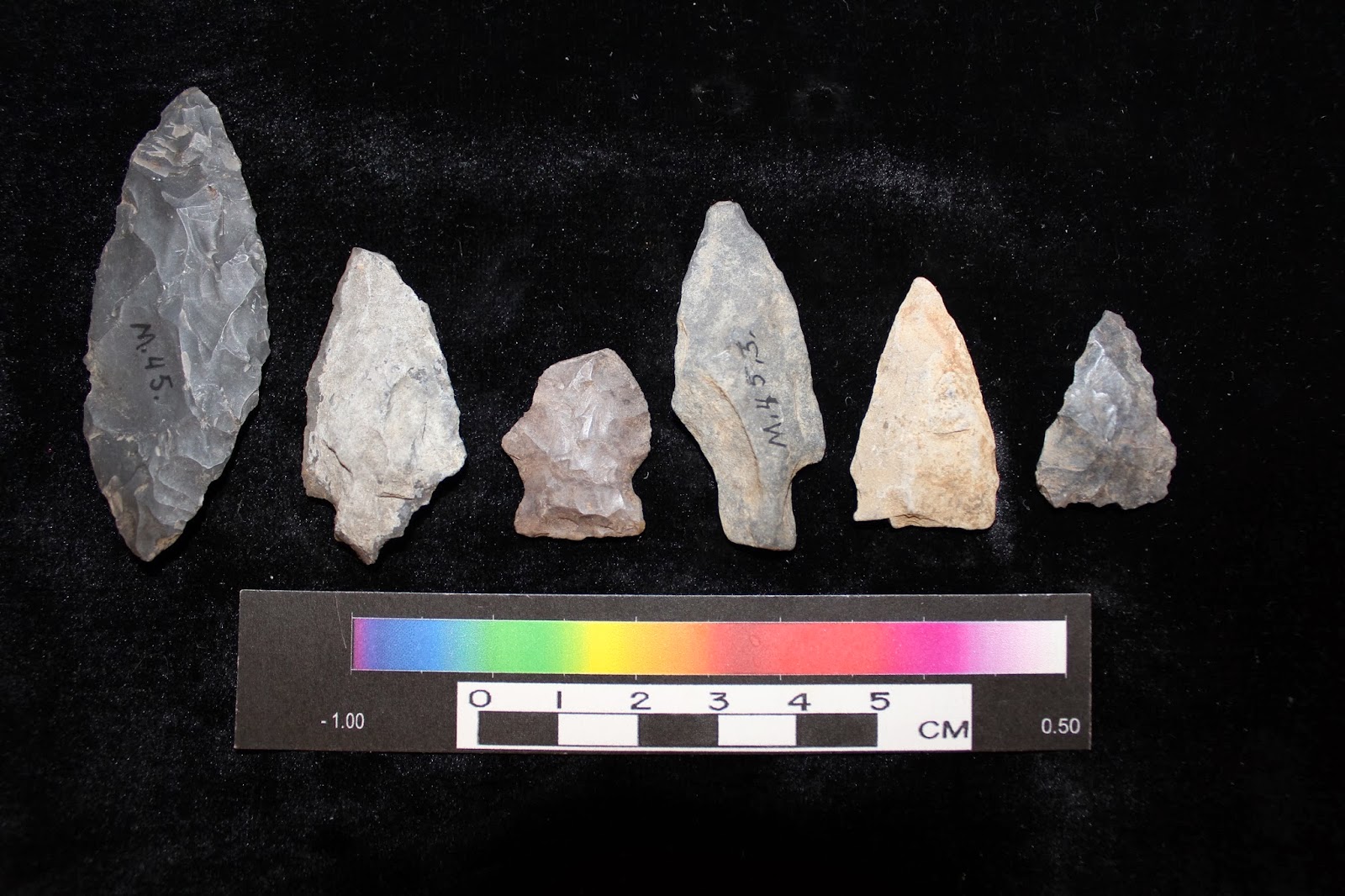 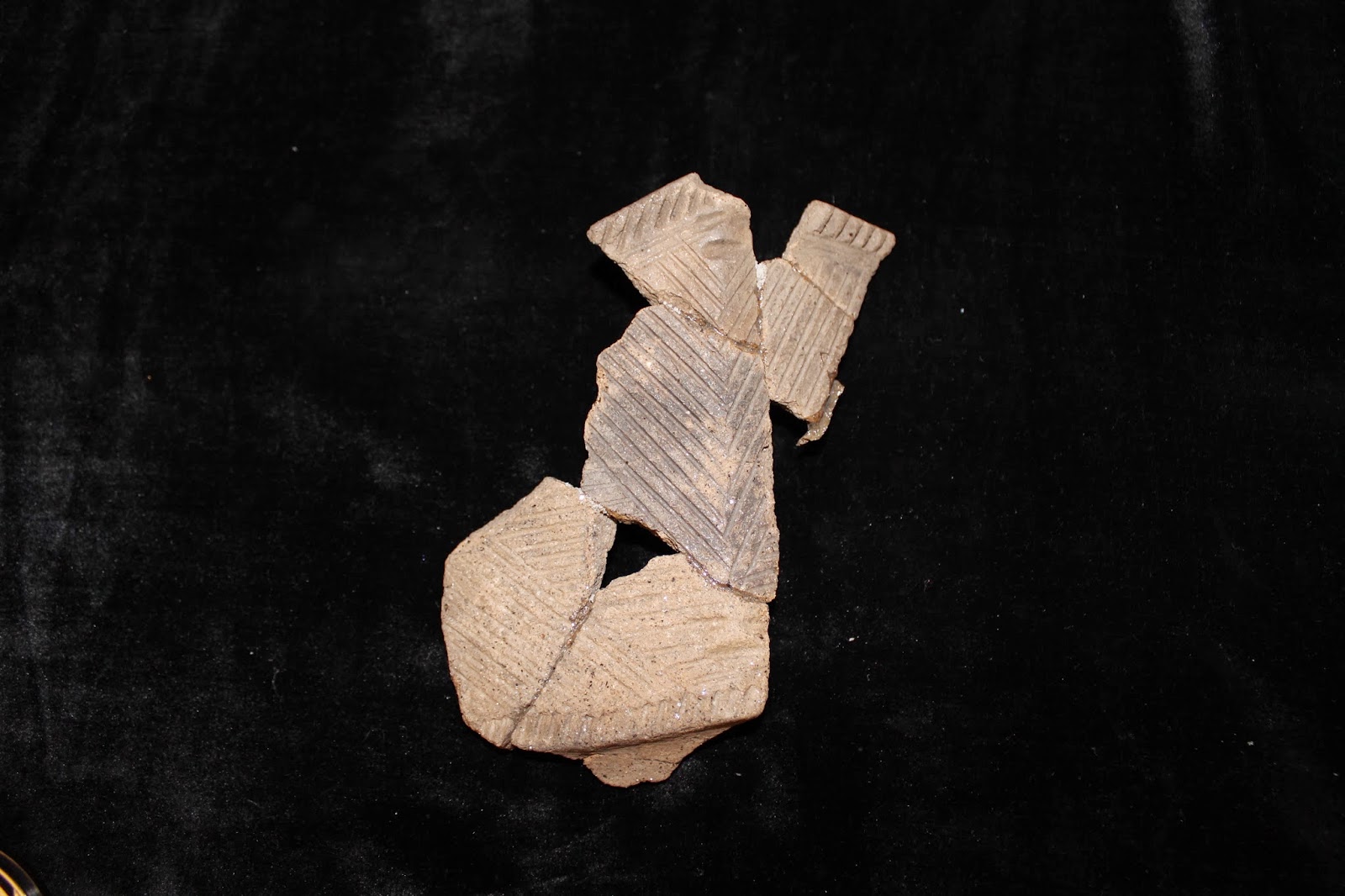 Munsee pottery from the Schrabisch collection

Evidence of these early settlers was recorded as early as 1930 with the publication of Archaeology of the Delaware River Valley between Hancock and Dingman’s Ferry in Wayne and Pike Counties, by Max Schrabisch. This comprehensive survey of a 15 mile stretch examined four rock shelters, three villages or long term camps and numerous short term multi use sites. Schrabisch recorded his observations of the sites in detail and provided basic profiles of the rock shelters. His summaries for each site include an interpretation of his findings. An example of this is his description of a shelter identified as “Indian Rock” shelter; “The tale to be read from the culture refuse extant under this rock seems to be as follows: The firepit with its contents of bones betokens cooking and the partaking of a meal; the chips, there being so many of them, the fashioning of an arrow point or two, and the pottery pieces along with the perforated shells the quondam presence of squaws.” While this interpretation certainly makes some broad assumptions, it does provide an overview of the types of activities which occurred in these rock shelters. Considering the time, 1930, Schrabisch was advanced in his practice of recording sites in such detail. 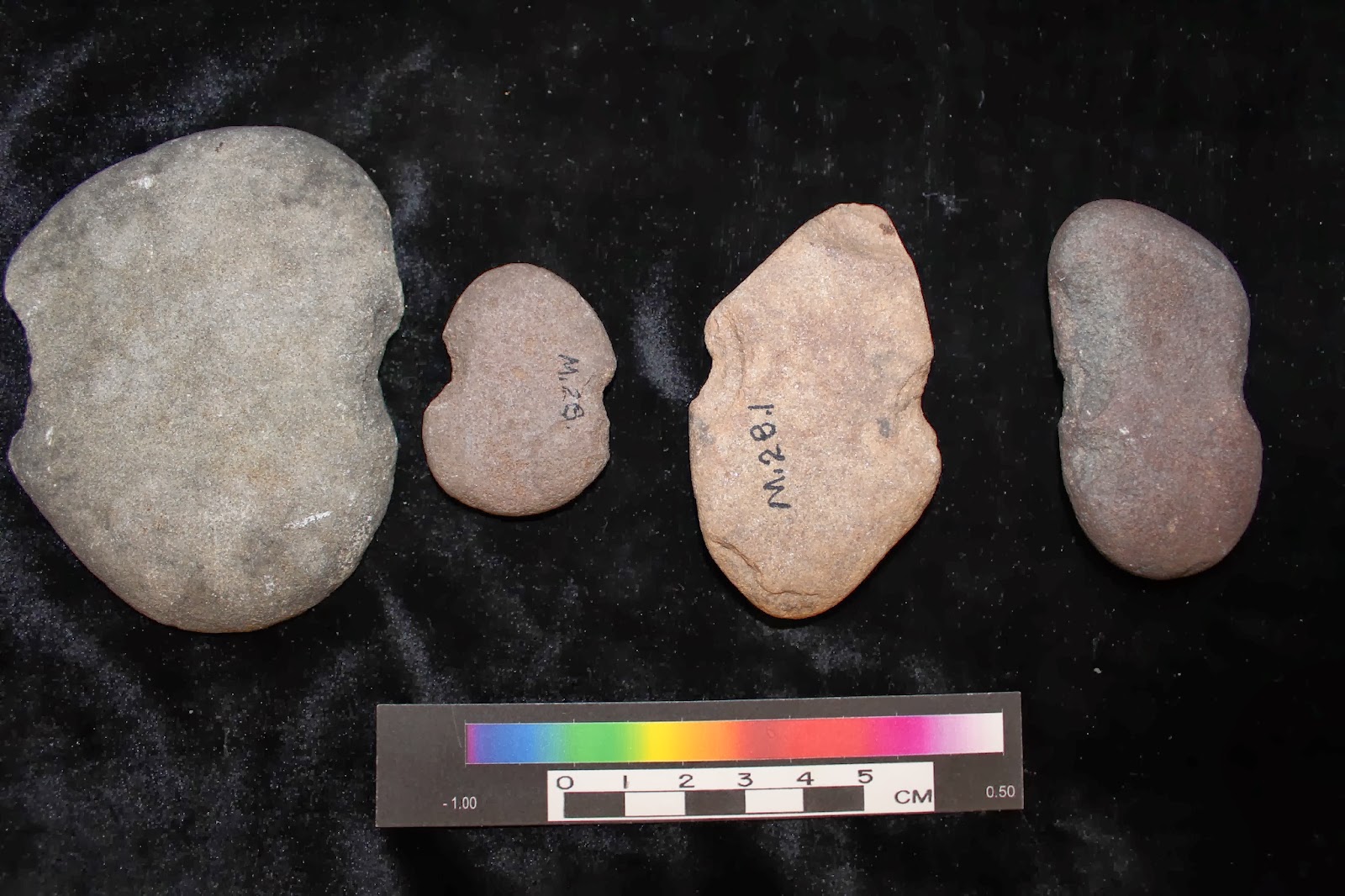 net sinkers from the Schrabisch collection 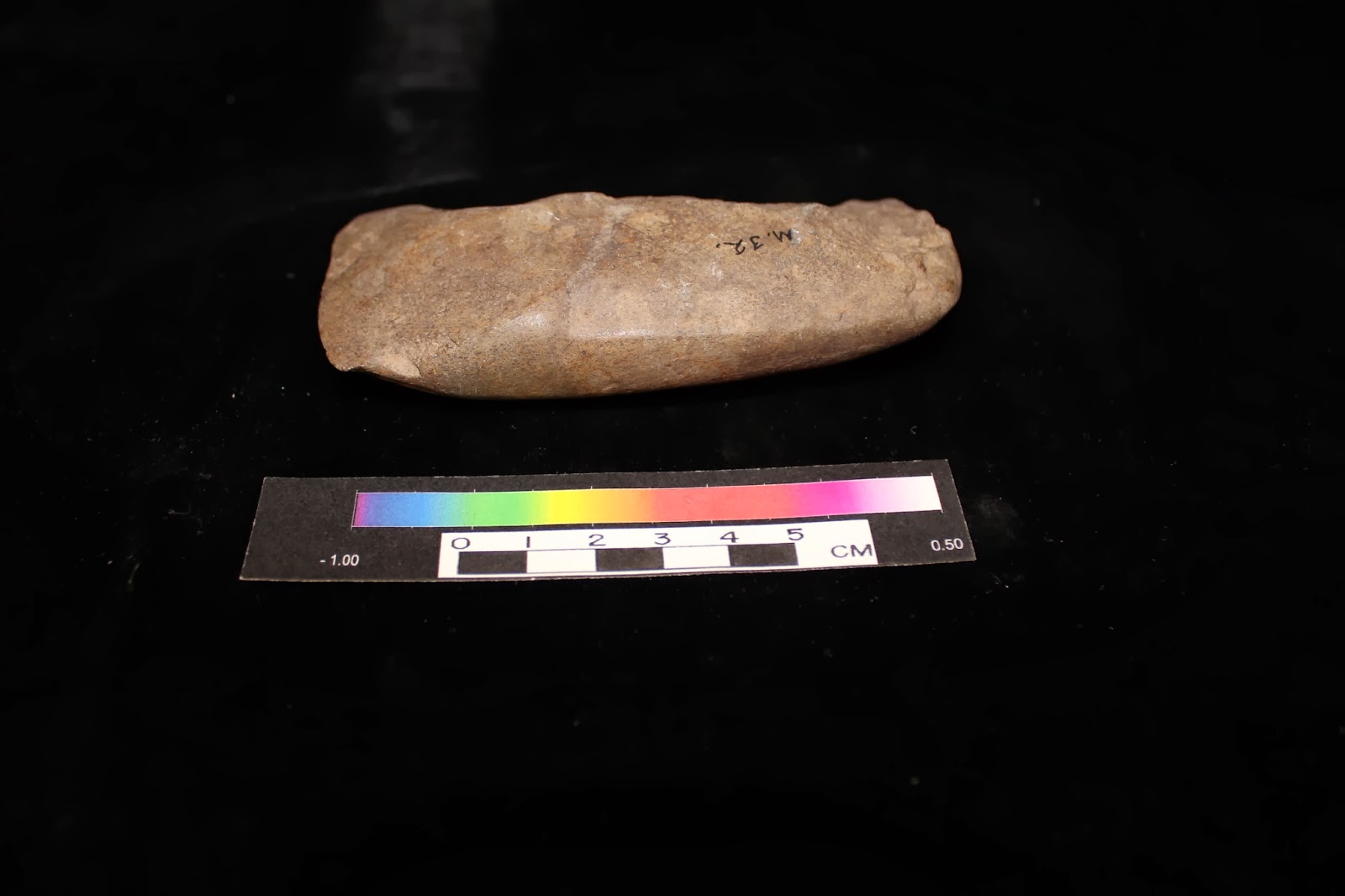 We would be remiss in not mentioning the research conducted by Vernon Leslie. His massive collection of over 4500 artifacts resides at the Wayne County Historical Society and is a testament to his years of inquiry and investigation of archaeological sites throughout the Delaware River Valley. His publication Faces in Clay provides an overview of many of the artifacts in his personal collection as well as several other privately held collections. 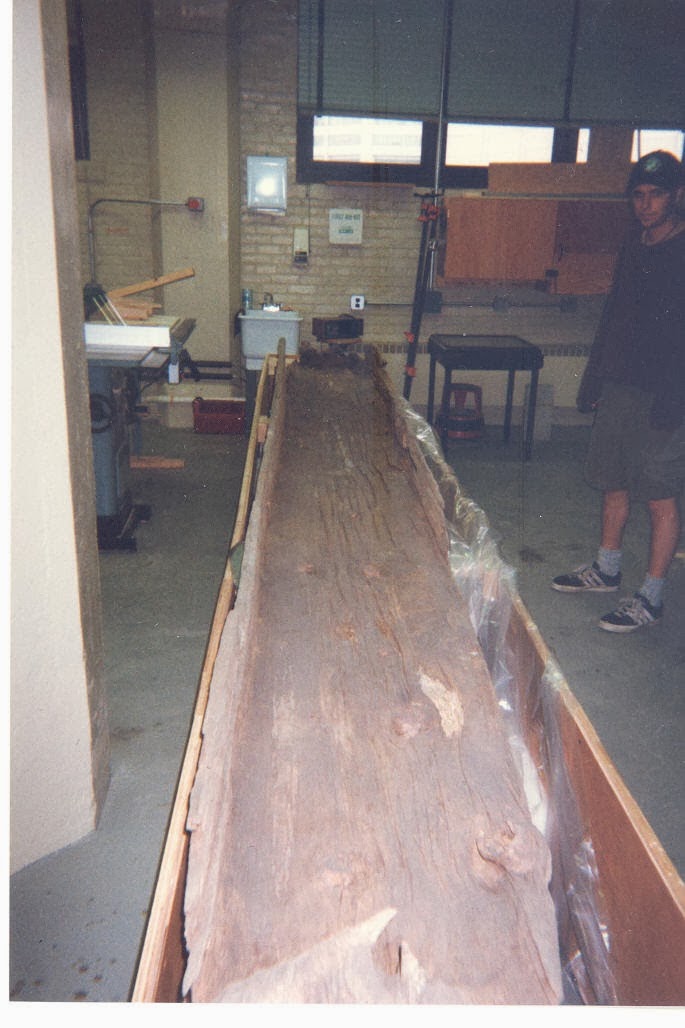 As mentioned earlier the glacial retreat left pools of water which required a means for early settlers to navigate these waters. The discovery of the Curtis Pond dugout canoe in 1996 provided an opportunity for archaeologists to examine the environment in which it was found, its method of construction and lastly it offered another example for comparison of with other recovered vessels.  Six dugout canoes have been recorded in Wayne County, all very similar in construction with distinctive angular marks produced by metal tools, an indication that these watercraft were made after European Contact. The Pocono Highlands contain glacial ponds filled with tannin-rich waters which contribute to the preservation of organic material including these wooden vessels.  Research has not provided strong evidence of the ethnic groups responsible for their construction, but it is likely that both native groups and early colonists would have employed this method of transportation.

European settlers emigrated from Connecticut, the Hudson Valley and Northern Europe into Wayne County and began utilizing the resources of coal, lumber and water in developing and settling the region. The footpaths that native peoples used turned into a Turnpike for transporting coal; this is generally the same route as SR 191 today. The Delaware & Hudson Canal Company constructed a 108 mile long system from the Lackawaxen River to the Delaware River that provided anthracite coal to markets in Philadelphia and New York. The canals gave way to the railroad and this led to an increase in the anthracite industry throughout the region. The second major industry was leather tanning. Three tanneries began operation after 1830 and grew well into the 19th century.  The leathers were imported from as far away as South America, processed by local tanners and then exported to markets in New York and Philadelphia.  These industries and the natural resources of Wayne County have attributed greatly to its settlement.

We hope you have enjoyed this glimpse into the archaeological heritage of Wayne County and that you will look at our past blogs for the archaeology of your county. We have only three counties left to explore in Pennsylvania and are gearing up for the next “series” of blogs. If you have a particular blog you would like us to cover, please post your comment and we will see what we can do.  We appreciate our faithful followers and hope to continue providing useful information for our readers on the archaeology of Pennsylvania.
References:

Baker, Joe
The Curtis Pond Canoe: The Identification, Recovery, and Context of a Dugout Vessel from the Pocono Highlands, March 1998. Unpublished manuscript of the Section of Archaeology, The State Museum of Pennsylvania.


For more information, visit PAarchaeology.state.pa.us or the Hall of Anthropology and Archaeology at The State Museum of Pennsylvania .
Posted by PA Archaeology at 5:05 PM