The staff of the Section of Archaeology at the State Museum of Pennsylvania just completed a very busy week at the 2014 Pennsylvania Farm Show. In spite of the temperatures plummeting to minus 2 degrees on one day, we estimated that approximately 43,548 people visited our exhibit where we distributed over 15,000 archaeology brochures, posters, tattoos, free planetarium passes and magazines.

Our principal goal at the Farm Show is to share highlights of Pennsylvania archaeology with the citizens of the Commonwealth. We also strive to promote the preservation of archaeological sites in our state so that future generations can benefit from these valuable resources. We think our goal was reasonably well achieved and we are beginning to plan next year’s theme and reflect on how we can improve. Presently, we are considering an exhibit on the Paleoindian/Early Archaic Period and climate change but we are open to suggestions.

For this week’s blog, we are keeping it simple and conducting a general history of the Section of Archaeology’s Farm Show public outreach program. As best as anyone can remember, State Archaeologist, Dr. Barry Kent initiated the first archaeology exhibit at the Farm Show in 1981. Our first exhibit was simply a display of interesting artifacts, mostly from Native American contexts. Two people from the Section of Archaeology worked at the exhibit from 9:00 am. until 9:00 pm. six days straight! The exhibit area was situated in a dusty area just off the main arena.

After a few years, the exhibit was moved to the Family Living area and our theme was changed from simply displaying artifacts to making an effort to record archaeological sites. It was felt that many farmers attending the Farm Show had collections of artifacts and these could be recorded with the Pennsylvania Archaeological Site Survey (PASS). Although the effort continued for several years, it proved to be impractical due to mapping issues and was discontinued.

During those early years, the exhibit space was small (10X20 feet) but was used to present a variety of themes such as prehistoric farming, projectile point typology and the use of tobacco by Native Americans. In one especially popular exhibit, the problematic artifacts from an excavation at Brandywine Battlefield, Delaware County, were exhibited and the farming community had fun identifying some of the pieces for us since we were unsure of their functions. Unfortunately, by the late 1980’s staffing and funding at the State Museum had been significantly reduced thereby ending the Farm Show public outreach program in 1991.

At the same time, another agency within the Pennsylvania Historical and Museum Commission, the Bureau for Historic Preservation (BHP), began expanding its public outreach program in 1991 and initiated “Archaeology Week” as a means to promote the preservation and protection of archaeological resources. This concept was part of a national program organized by the Department of Interior and continues in most states today. The archaeology poster series was started at this time along with an essay contest for middle school students.

The BHP conducted a field program at the Central Builders site in Northumberland County to celebrate Archaeology Week in 1992 and 1993 (Archaeology Week was expanded to Archaeology Month in 1996). In 1994, the BHP initiated an alternative mitigation project on City Island involving the Corps of Engineers and the City of Harrisburg. As an integral part of this project, which lasted until 2004, several experimental archaeology projects were initiated such as Native American flint knapping methods, horticulture, pottery making, house construction and making the dugout canoe. 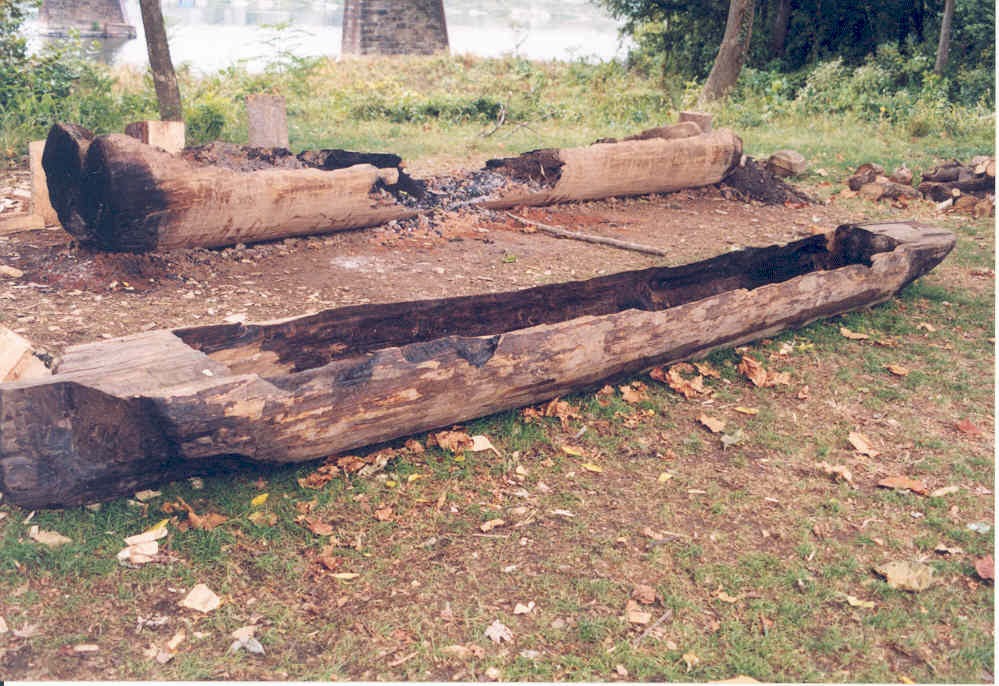 The first dugout was made in 1997. It was inspired by the discovery of the Curtis Pond dugout in Wayne County and the discovery of a cache of axe and adze performs on City Island. The first dugout was narrow, had thin side walls, compared to our present dugout. A second dugout was attempted in 1998. This was larger but unfortunately burned in half on its last day of construction. The third dugout was made in 1999 and was very large with thicker side walls. It measured three feet wide and 24 feet long.  It was this dugout that made the voyage from Harrisburg down the Susquehanna River to Havre de Grace, Maryland. 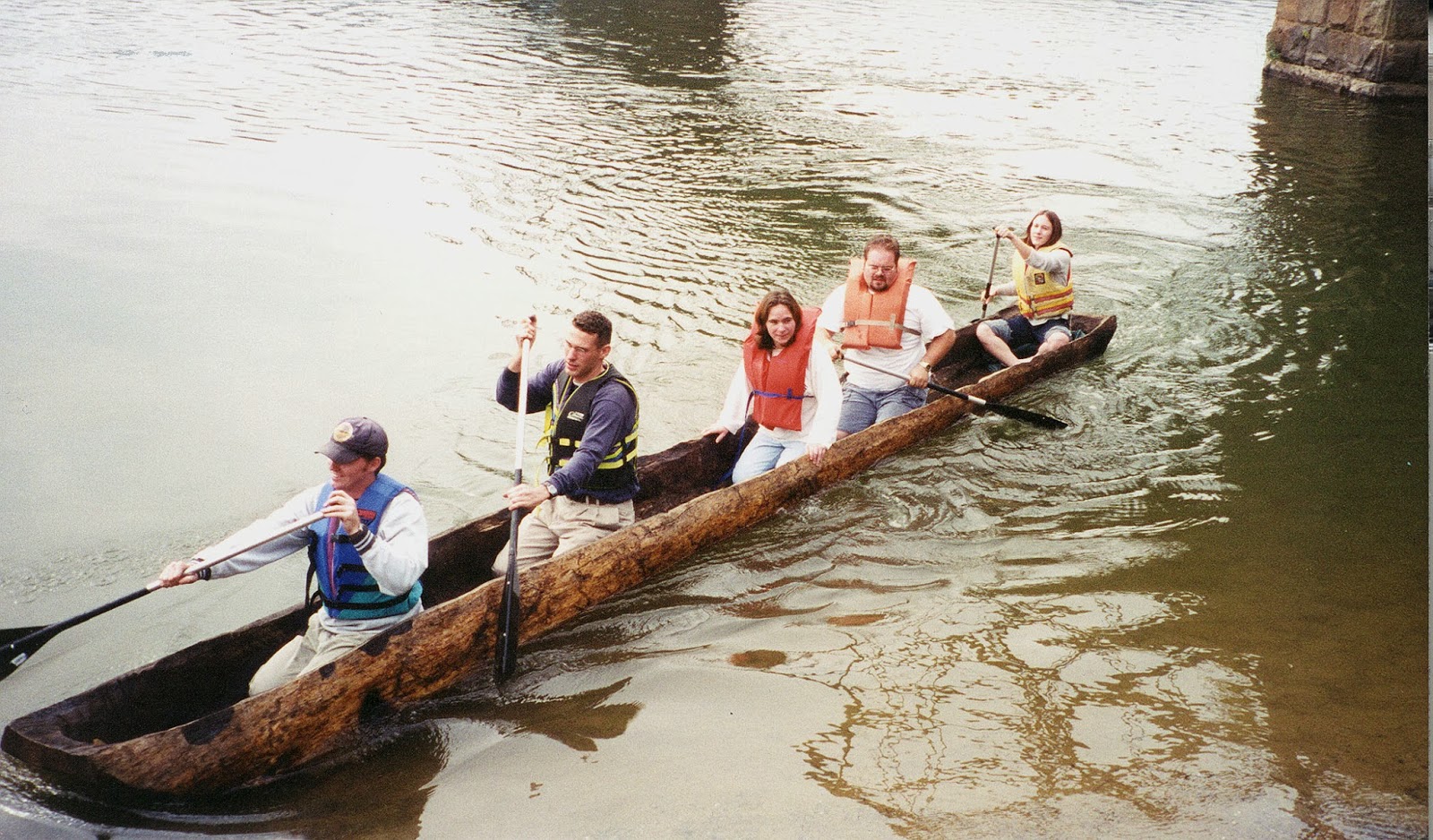 1999 dugout off the shore of City Island, Harrisburg

The first three dugouts were made using copies of 17th century metal axes and fire. In 2003, the BHP re-instituted the Farm Show public outreach program and the exhibit included this dugout. Unfortunately, dugout #3 suffered from dry rot and was replaced by our current craft in 2005. 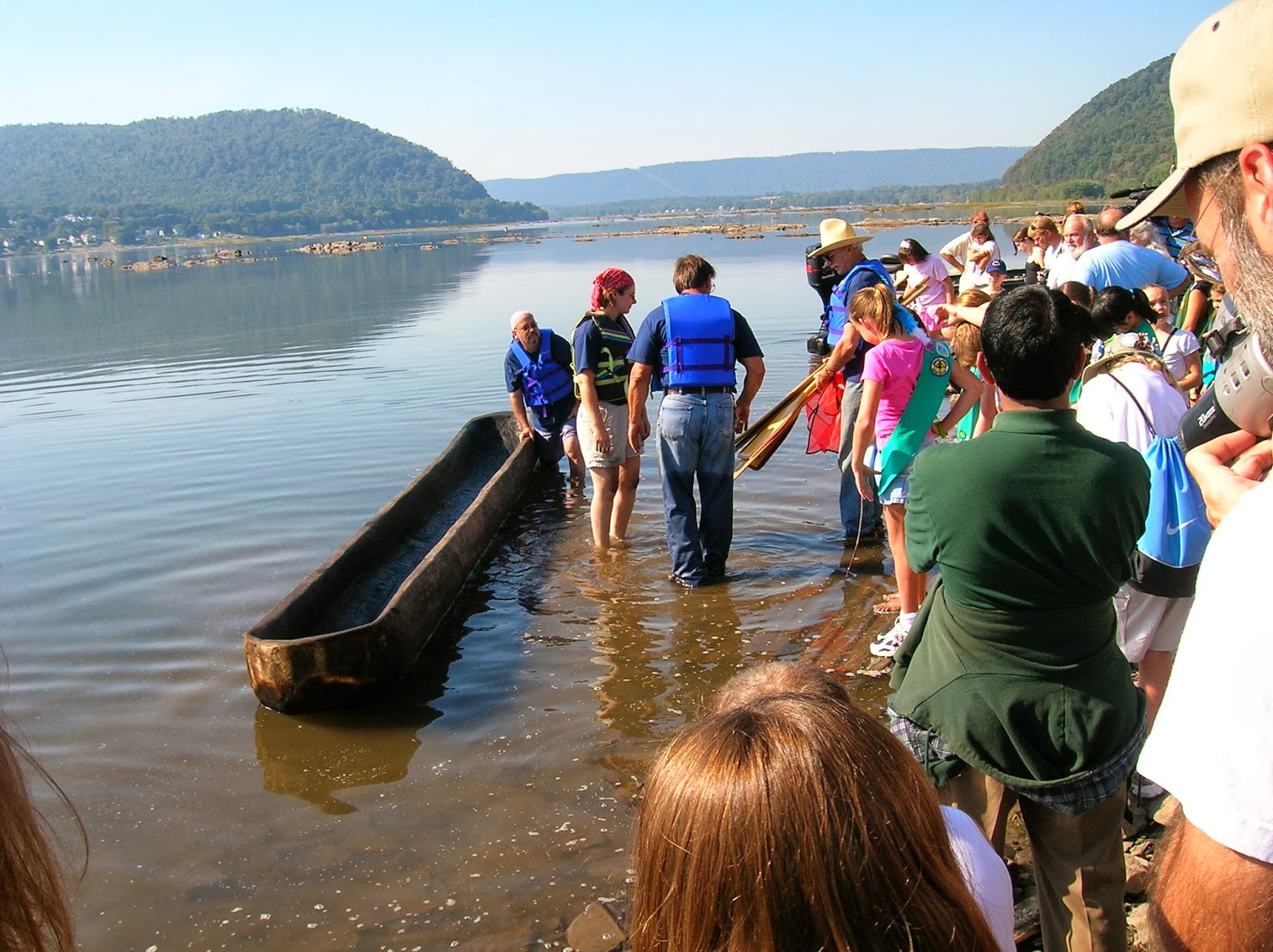 Once the log was cut in half length wise, the most recent version was made exclusively using Indian technology i.e. stone adzes and burning with fire. The public is very impressed with this 20 foot dugout and it continues to be an attraction at the Farm Show. It has been described as a “kid magnet”. It truly attracts children and allows our staff and volunteers to speak to their parents concerning the preservation of archaeological sites and encourages them to visit the State Museum.

Take a journey with us this week in Pennsylvania archaeology as we showcase some of the photos over the years of our public outreach efforts. If you haven't seen us out and about in central PA, please consider visiting us at one of our programs conducted throughout the year so you can join us in embracing our archaeological past! 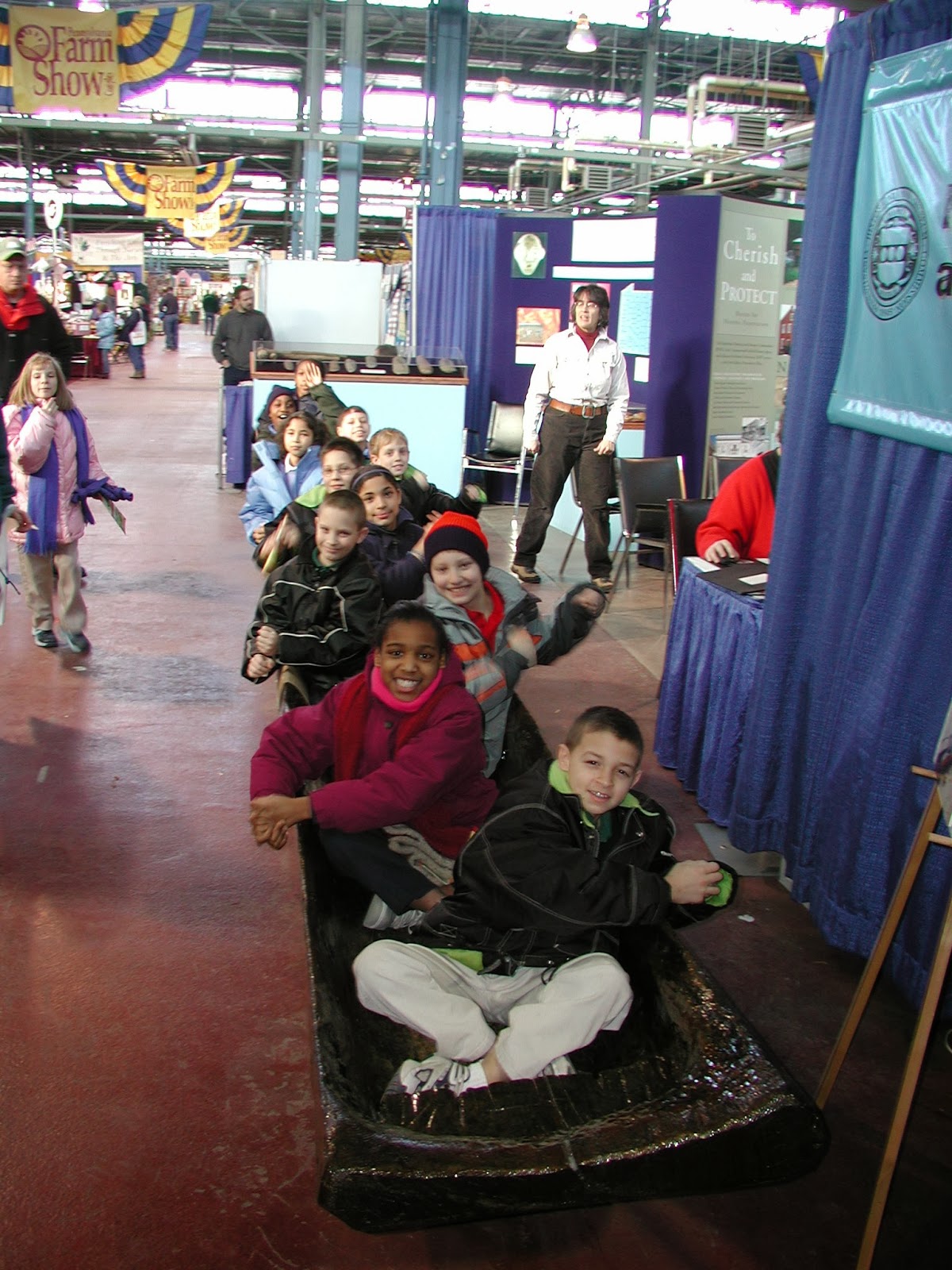 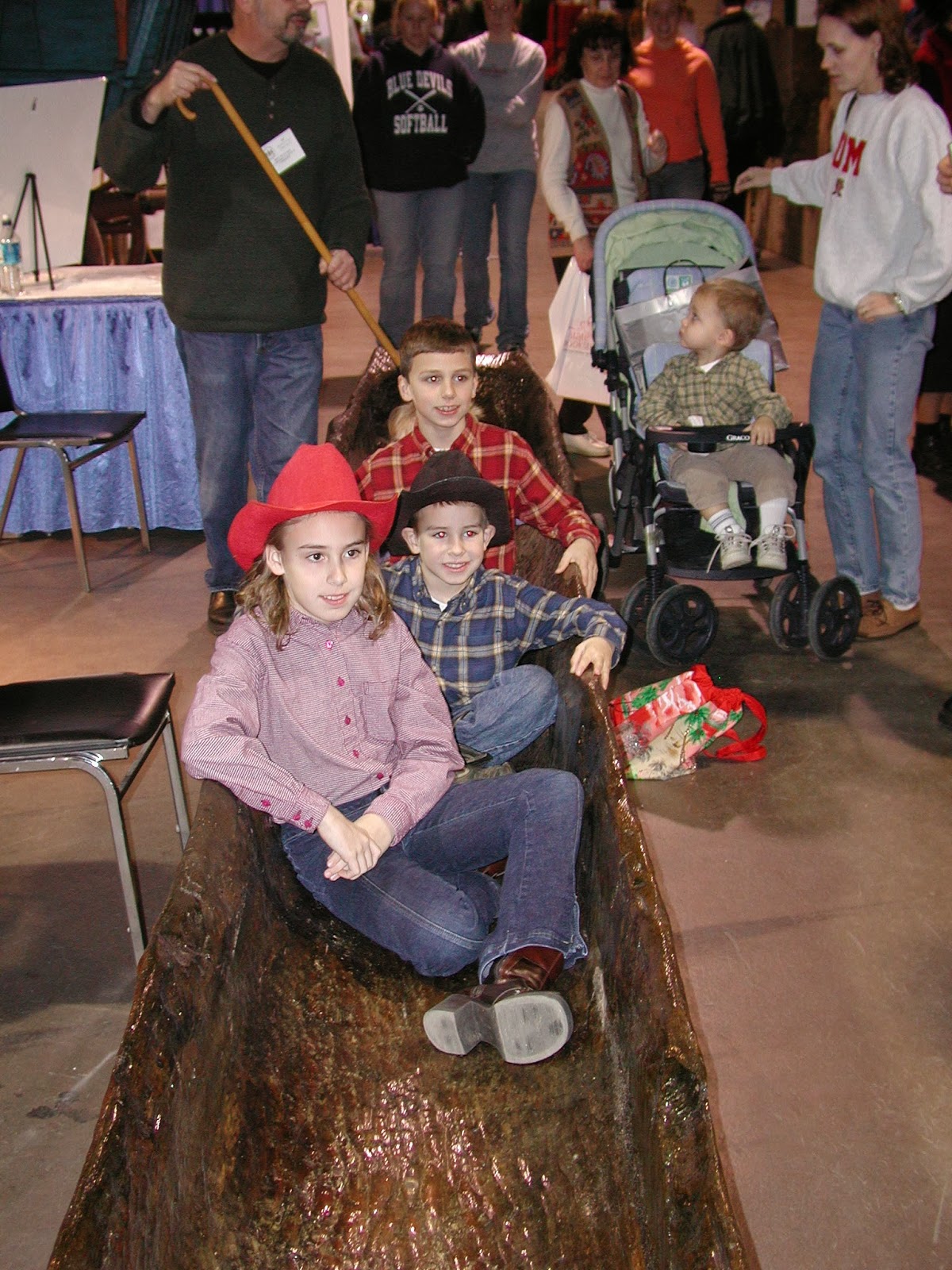 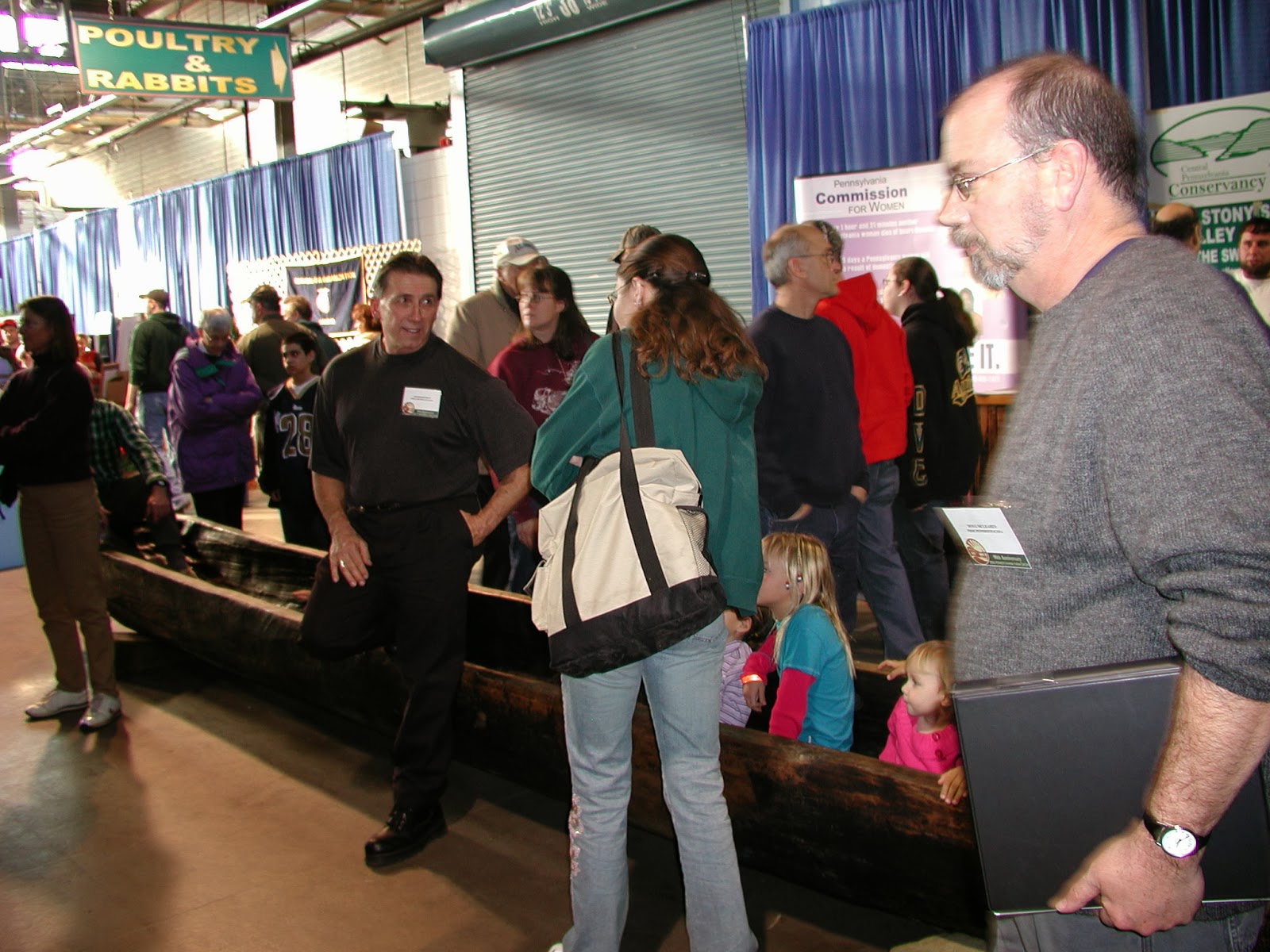 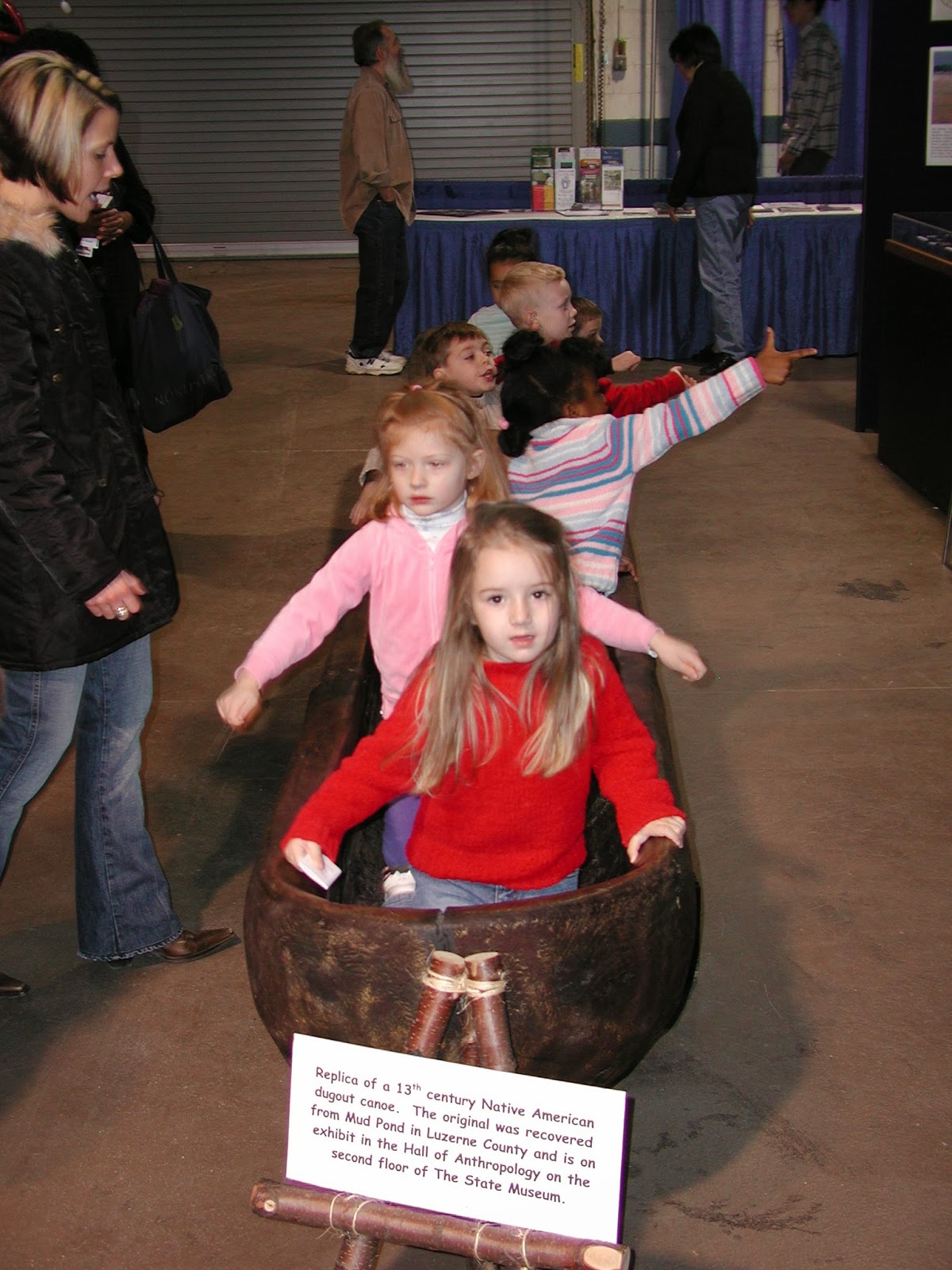 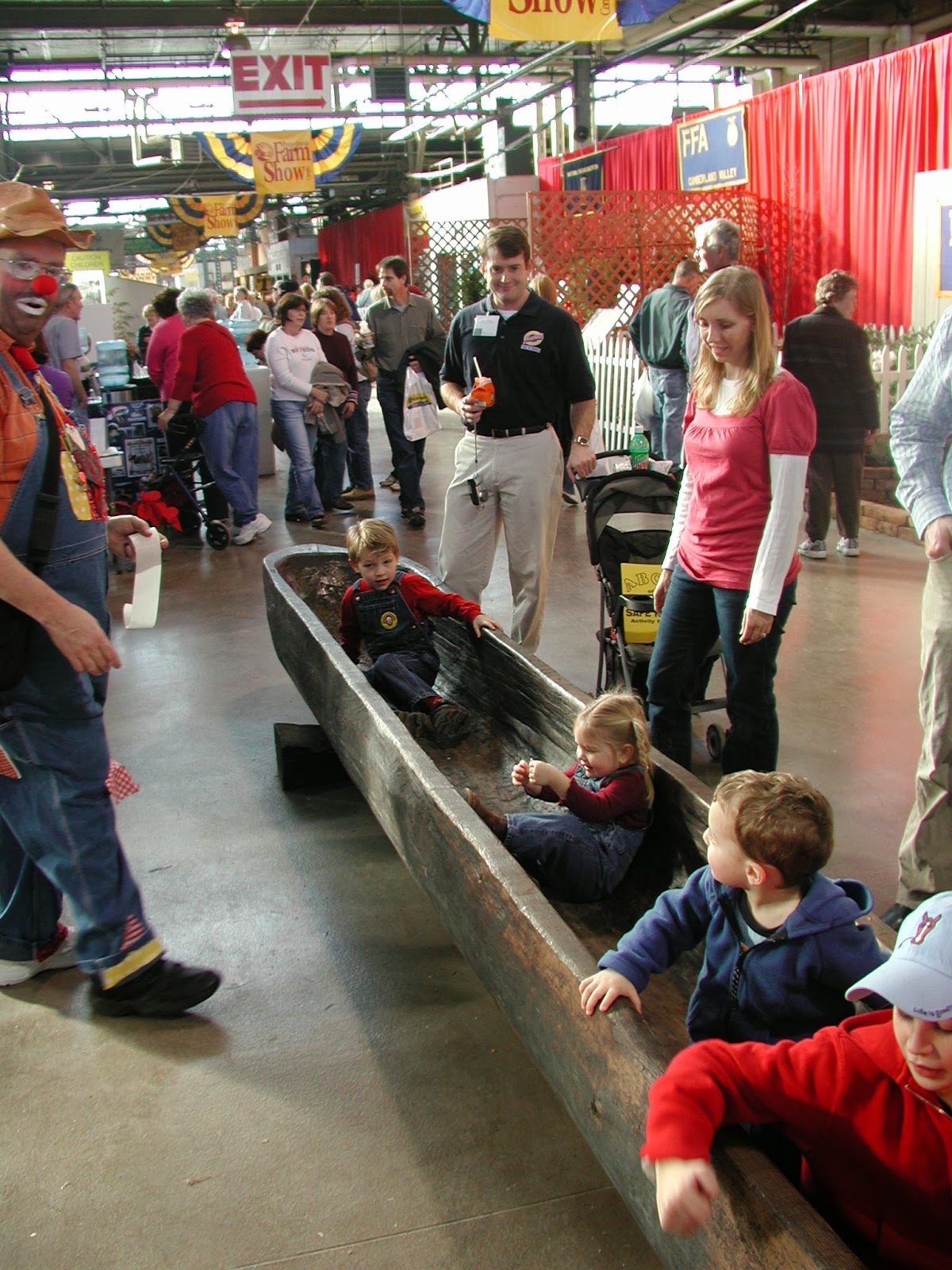 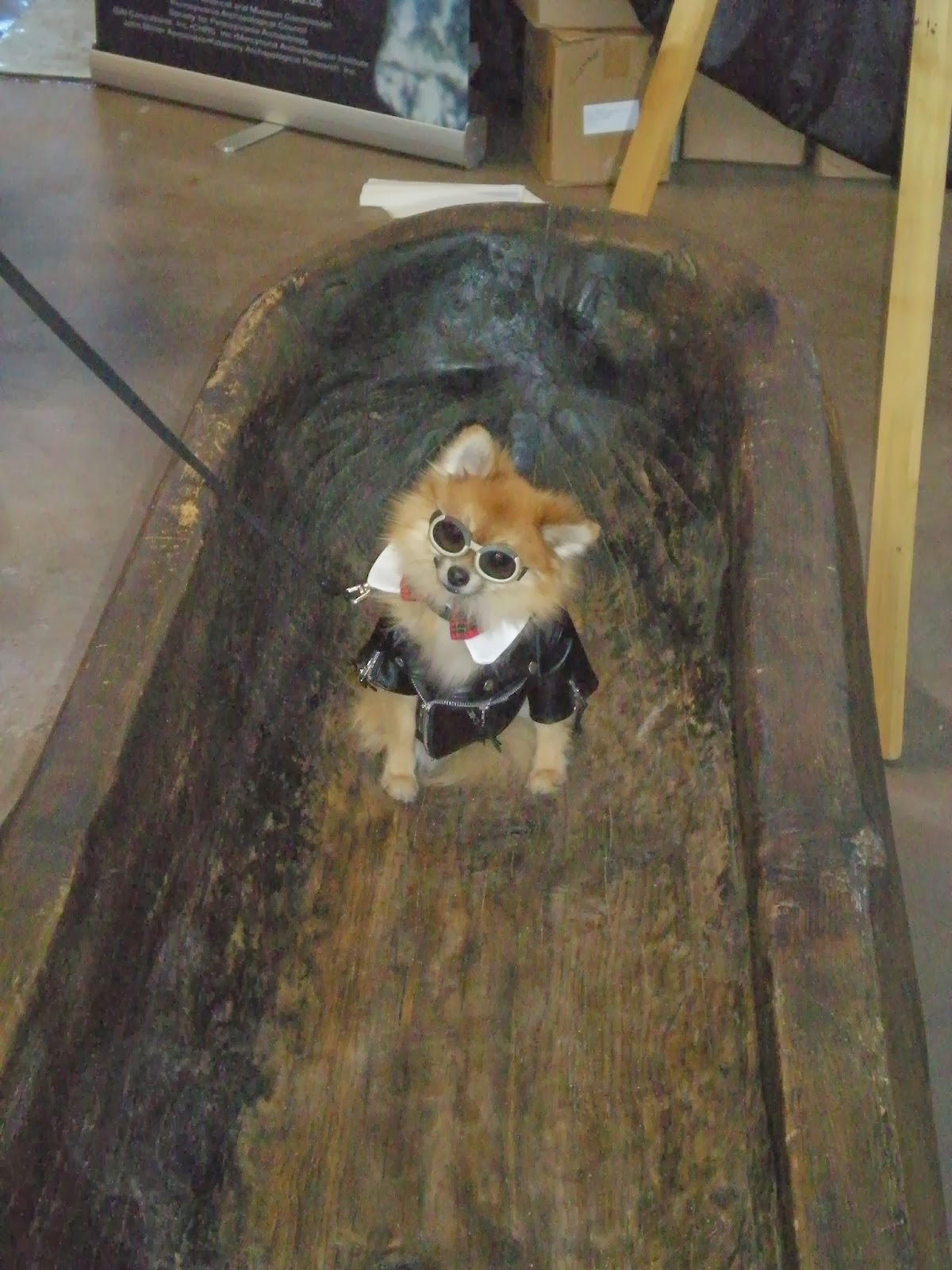 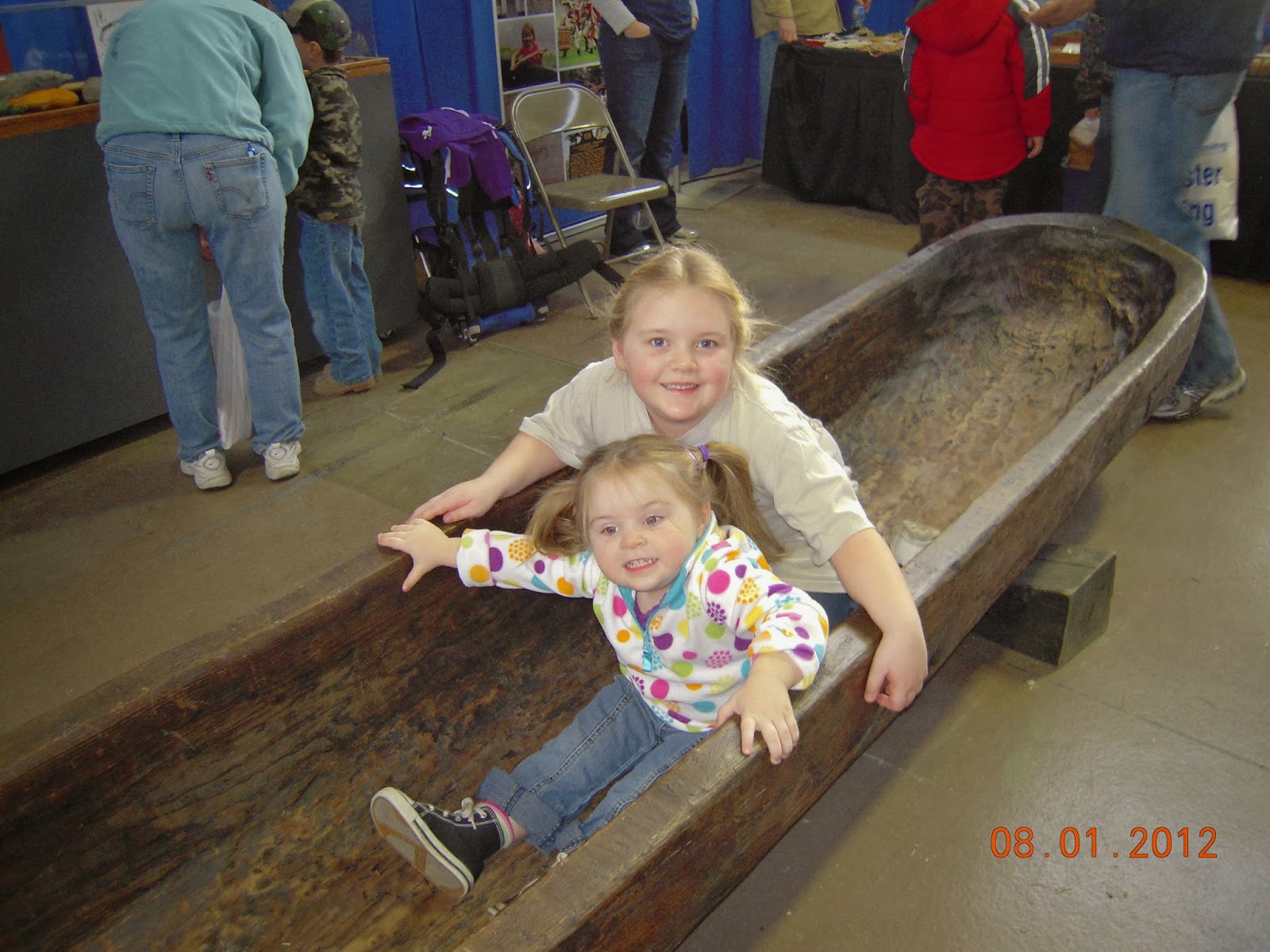 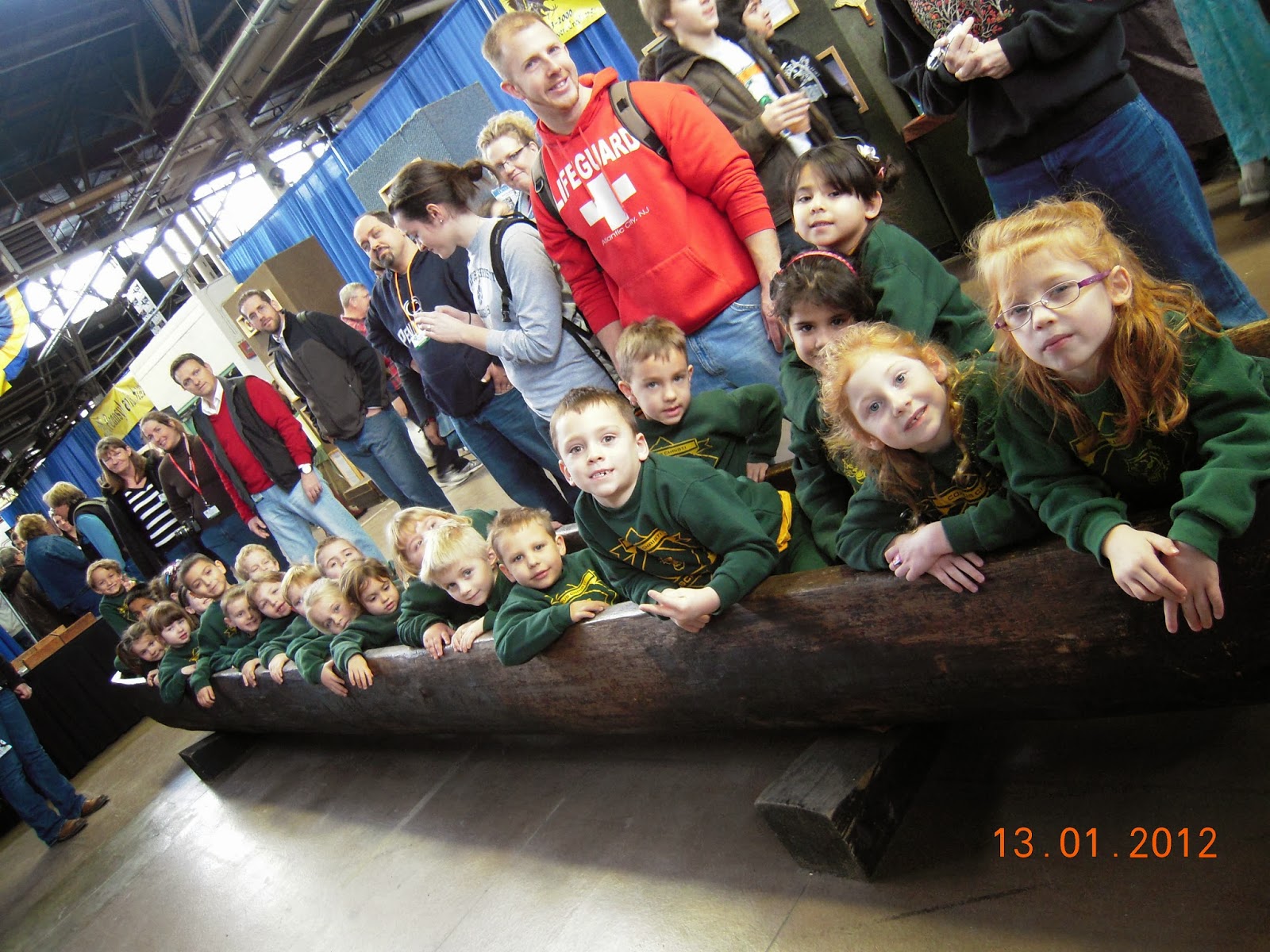 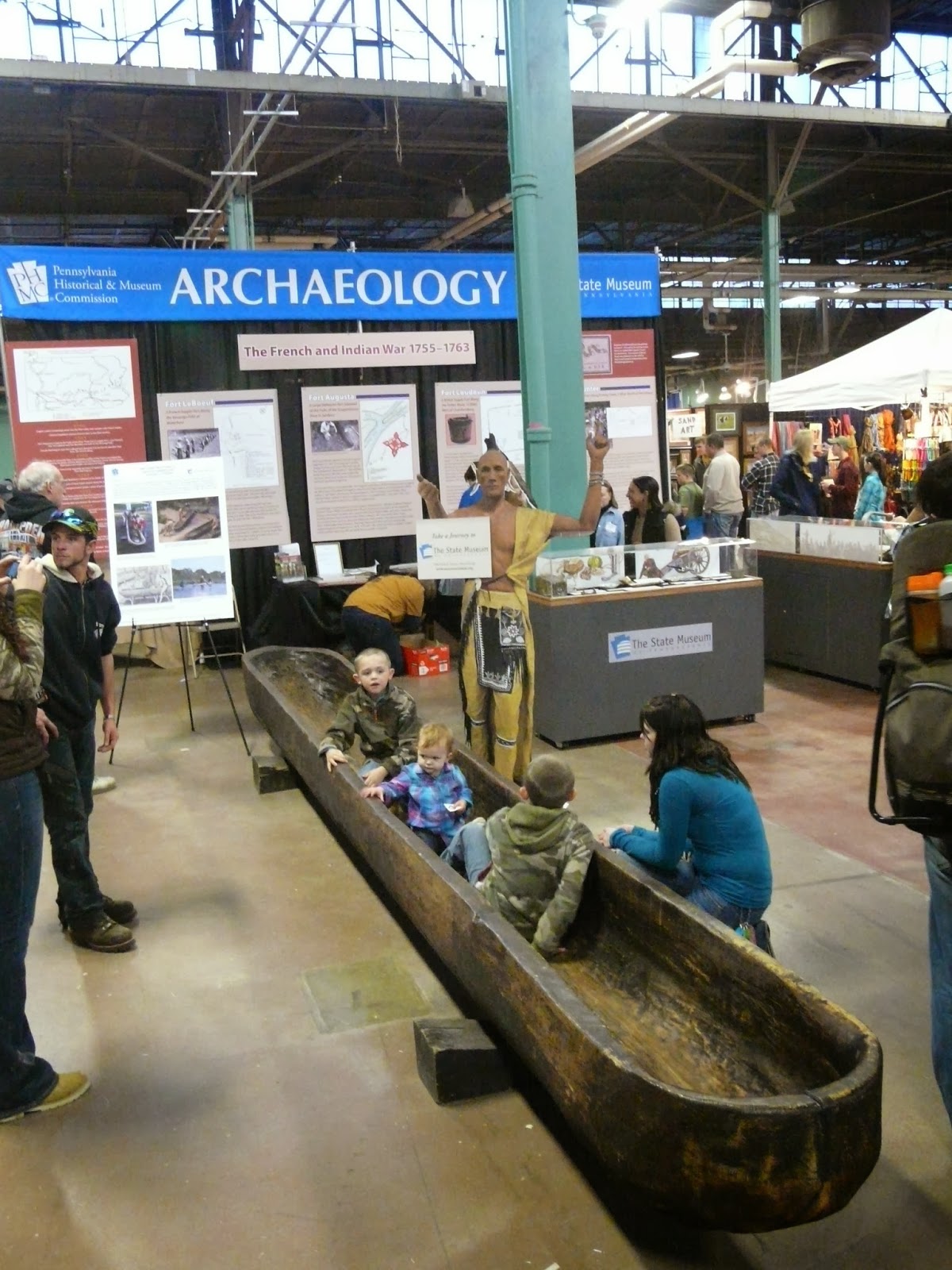 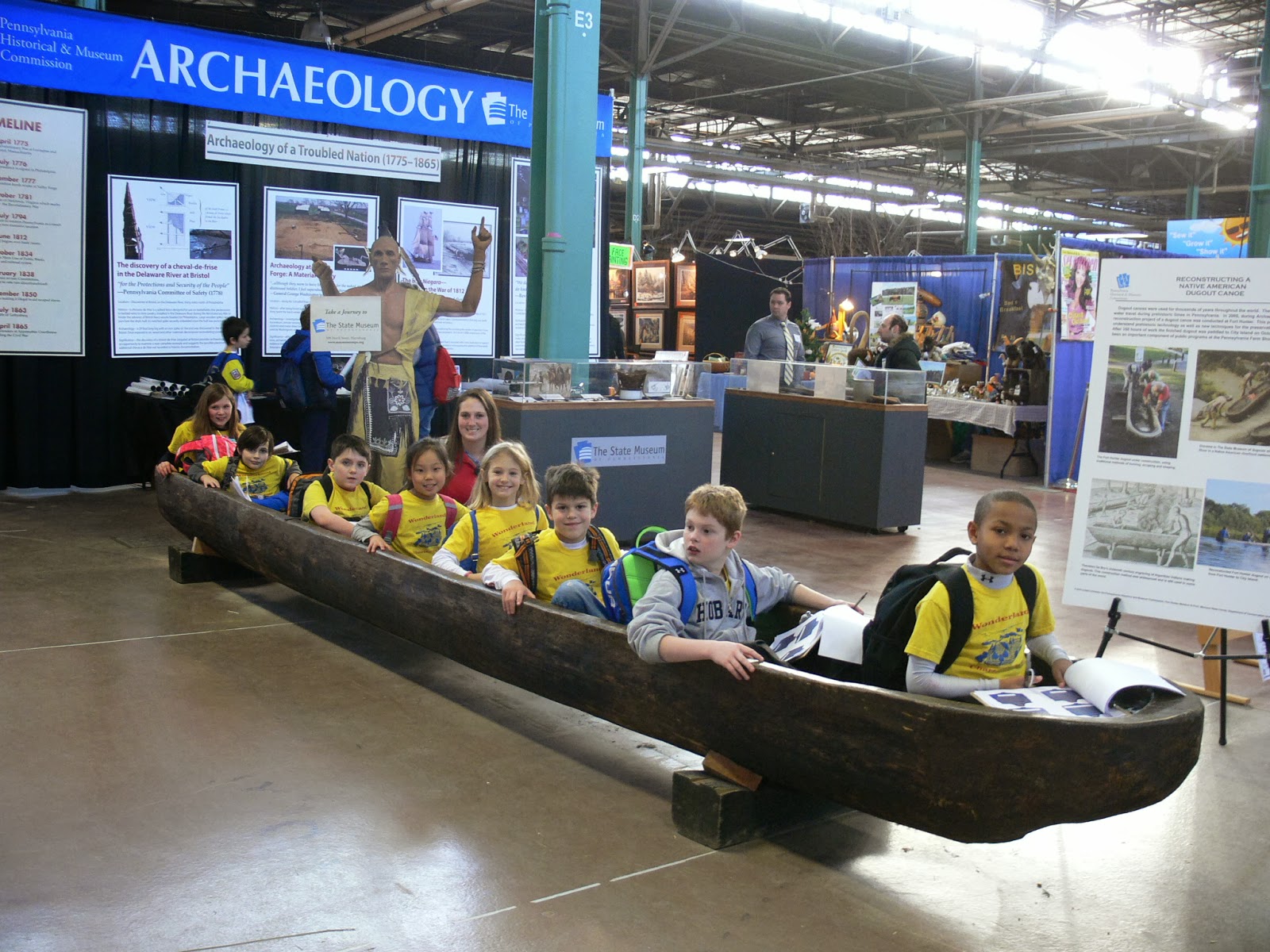 Next week we will return to the archaeology of Pennsylvania by county.

For more information, visit PAarchaeology.state.pa.us or the Hall of Anthropology and Archaeology at The State Museum of Pennsylvania .
Posted by PA Archaeology at 3:10 PM