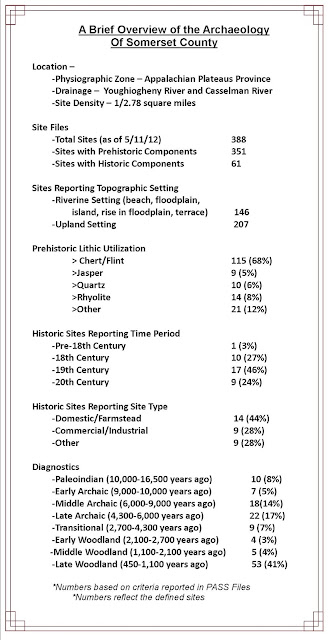 This week’s journey by county through the archaeology of Pennsylvania takes us to southwestern Pennsylvania and Somerset County.  Somerset County falls primarily within the Allegheny Mountain Section of the Appalachian Plateau Province, although a small portion of southeastern Somerset County falls into the Allegheny Mountain Section of the Valley and Ridge Province. Overall, the topography of Somerset County is rugged and mountainous. One mountain in the county has the highest elevation in Pennsylvania at 3213 feet.
Somerset County is drained by the Youghiogheny and Casselman Rivers, which form a portion of the headwaters of the Ohio River Drainage.  The Raystown Branch of the Juniata River—part of the Susquehanna River Drainage—originates in Somerset County, as do several headwaters of the Potomac River. As such, this region’s geographic placement indicates that it potentially served as a crossroads between cultural developments that occurred in different parts of the Northeast and Middle Atlantic regions. The majority of archaeological sites in Somerset County occur on or adjacent to the extensive areas of floodplain near Meyersdale and Confluence.


Two American Indian trails, Nemacolin's Path and the Turkeyfoot Path, are known to have crossed through Somerset County.  Nemacolin's Path ran from Wills Creek near Cumberland, Maryland, to the confluence of Redstone Creek and the Monongahela River.  The Turkeyfoot Path at the confluence of Wills Creek and the Potomac River near Cumberland, Maryland and continued to Confluence, Pennsylvania.  The interconnectedness of southwestern Pennsylvania with the eastern portions of the state and with Maryland to the south was clearly established by 1800 B.C., as evidenced by the distribution of raw materials such as rhyolite and steatite.  By the Late Prehistoric period (A.D. 900 to 1600), these Native American paths may have reached their peak usage. 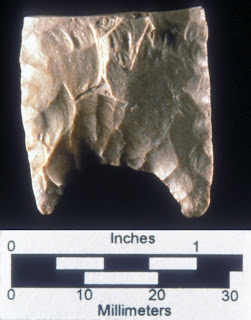 A Clovis projectile point base excavated near Meyersdale, Pennsylvania


Late Archaic populations in western Pennsylvania are characterized as specialized hunters and gatherers intensifying their use of specific resources, such as fish, and during this period the initial domestication of eastern seed plants occurred. Base camps were likely in floodplains and low terraces of high order streams. Otter Creek and Brewerton notched points are the dominant Late Archaic projectile point forms recovered in Somerset County. Late Archaic sites are well represented in the vicinity of Meyersdale, with representative components at 26 sites in the form of over 100 diagnostic points, including Brewerton Corner Notched, Eared Notched, and Side Notched varieties, as well as to the Lamoka type.  Sites with Late Archaic components in the Meyersdale area are distributed across a wide variety of topographic settings, including the floodplain/terrace systems of the Casselman River and tributary streams, saddles, and lower slopes. This distribution of sites indicates extensive utilization of the local landscape.

The Early Woodland period saw the introduction of pottery to Somerset County, but otherwise settlement and subsistence patterns continued relatively unchanged from the Archaic period.  Investigations in the Meyersdale area recovered only ten sites with Early Woodland components, suggesting that some Late Archaic diagnostics may have been used into this period. Middle Woodland sites are also sparsely represented in Somerset County, perhaps for the same reason. Late Woodland sites are better represented by diagnostic projectile points, including Backstrum, Chesser Notched, and Jack's Reef Pentagonal types.

One particularly intriguing Late Woodland site was excavated in the Meyersdale area. Analysis of data recovered in excavations conducted at The Field W-E site (36So220) revealed use of the site from the Late Archaic through the Late Woodland. During earlier occupation periods it was utilized as a short term camp site or bivouac. In the Middle Woodland to Late Woodland it is hypothesized that this site served as a periodic gathering place for surrounding hamlets. Two shallow trenches were identified and within each a series of postmolds, possibly fence or screen-like barriers. Analysis of remains recovered from two hearths revealed heavy seasonal use during the Middle and Late Woodland periods. This use of a site as a “vacant center” is consistent with settlement patterns observed elsewhere in the Ohio River Valley and central Pennsylvania, but was previously unrecognized in the region. No evidence for house remains were discovered as would characterize the subsequent Late Prehistoric period.

Drawing of a Monongahela village, courtesy of Laura J. Galke

The best documented sites in Somerset County date to the Late Prehistoric period and are associated with the Monongahela culture.  The widespread adoption of maize agriculture is often thought to have spurred people living in scattered hamlets and other sites to join together in village communities during the Late Prehistoric period.  Communities may also have gathered into compact village sites as a response to cooling caused by the Little Ice Age. Monongahela villages in Somerset County consisted of a ring of houses around an open central plaza and were usually surrounded by a plaza.  Some Monongahela continued to live in hamlets even after the rise of village communities, and several rockshelters dating to the Late Prehistoric period have also been excavated. The last Monongahela village inhabited in Somerset County, located near Meyersdale,  is Peck 2 which dates to the early 1500s.  The Monongahela living here may have joined other communities further to the west.
When the first Europeans crossed into what was to become Somerset County, refuge groups of the Iroquois, Mingoes, Lenni-Lenape or Delaware, and Shawnee inhabited the area.  Several major Native American trails that crossed Somerset County were integral to European expansion into and through Western Pennsylvania. The hostilities between Britain and France discouraged settlement in the area of modern Somerset County. Thomas and Richard Penn, sons of William Penn, purchased parts of Somerset County from American Indians after the Treaty of Fort Stanwix was signed in 1768. Somerset County itself was actually formed out of Bedford County on April 17, 1795. The increasing population in the future county of Somerset was no longer willing to travel long distances to register legal documents at county offices in Bedford.
In the early decades of the nineteenth century, the newly formed Somerset County played an active role in the movement of settlers to regions further west. Although many inhabitants of Somerset County during the nineteenth and twentieth centuries were farmers, industrial development in the vicinity of Meyersdale is particularly noteworthy. The coming of the railroad in the mid-nineteenth century especially influenced the growth of local businesses. During the twentieth century, industrial development reached a peak and then a decline while the surrounding rural area became fully integrated into industrial dairy and coal production. Historic archaeological investigations in the Meyersdale area in particular document key aspects of this transition. 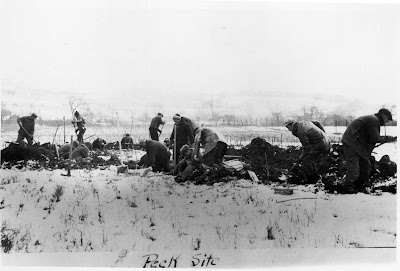 Winter excavations at Peck 1, a Monongahela village site near Meyersdale

Somerset County has a rich history of archaeological investigations. Major archaeological investigations in Somerset County were initiated at the height of the Great Depression. Some leading scholars at the time argued—incorrectly—that there had never been a substantial aboriginal occupation of the region.  From 1934 to 1940, the New Deal-funded Somerset County Relief Excavations undertook large-scale excavations of village sites to address this issue, as well as to provide sufficient work to keep a crew of men continuously employed. Local citizens interested in the County’s past helped guide the project director, Edgar Augustine, to probable village site locations.  One of these citizens was Flora Church, a member of the Pennsylvania Historical Commission, and a prominent resident of Meyersdale. Mary Butler developed the first formal definition of the Monongahela Culture based on ring-shaped village sites excavated by these work relief crews.
The Carnegie Museum of Natural History, aided by avocational archaeologists—especially the Somerset County Archaeological Society—documented and excavated a number of archaeological sites in Somerset County.  The most notable of these was the excavation in the early 1970s of the Gnagey No. 3 site, which consisted of two overlapping Monongahela village components. 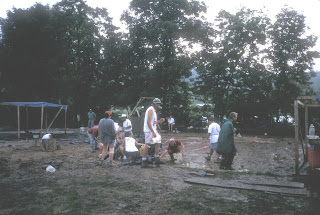 Excavations as part of the U.S. 219 Meyersdale Bypass project

Beginning in the 1990s, most excavations in Somerset County have been driven by compliance-related studies, most notably the U.S. 219 Meyersdale Bypass Project.  The construction of a five-mile bypass around the town of Meyersdale led to the investigation of over 60 archaeological sites, with eight sites studied in extensive detail.  Research efforts initiated during the U.S. 219 Meyersdale Bypass Project, but continued independently, have made extensive use of curated collections of artifacts and field notes, especially those held by the Archaeology Division of The State Museum of Pennsylvania.  These research efforts of curated collections have led to new theoretical and methodological insights into Monongahela village settlements, a revised radiocarbon chronology for Somerset County, and a reconsideration of the history of archaeological investigations—particularly those associated with New Deal work relief crews. The importance of Somerset County’s heritage is further realized by the application of cutting-edge 3D artifact scanning technology of archaeological findings from the county.

3D model of a chunky stone from Fort Hill