Today is the final day of my internship in the Section of Archaeology at the State Museum of Pennsylvania, and shortly I will begin my senior year as an archaeology major at Mercyhurst University in Erie. Working closely with Dr. Kurt Carr, the goal of my internship project was to organize the artifacts of the Barry Kent projectile point type collection (BKC), and place them into Riker mounts. More than 3,000 projectile points are in the BKC, which also includes other interesting lithic artifacts such as adzes, tool blanks, bifaces, beads, drills, gravers, pendants, steatite vessels, and plummets. The purpose of the project was to improve accessibility to the artifacts, which would ensure that more of the artifacts are used when the staff engages in outreach programs in educational public forums.
Comprised of acquisitions to the museum from a variety of sources throughout the 20th century, the collection represents over 10,000 years of Native American culture history in eastern Pennsylvania. In the late 1960s, Barry Kent used the projectile points as part of his dissertation (Kent 1970). I was able to meet Dr. Kent this summer and discuss the collection with him, including the research goals for my project. He discussed some of the challenges he faced in his own research and gave me suggestions on avoiding similar circumstances. Dr. Kent also let me know that categorizing points by type can make one crazy. That sentiment coincides with Dr. Carr’s oft stated, “Don’t over think it!”
I prepared for my internship by completing Dr. Carr’s suggested readings, which provided background information on the important sites that aided in building the chronology of eastern Pennsylvania, and the diagnostic projectile point types of the region. The next step was to retrieve the projectile points from storage and organize them by diagnostic type. The types I used are: Kirk, Palmer, Charleston, and St. Charles (Early Archaic); MacCorkle, St. Albans, LeCroy, Neville, Stanly, and Kanawha (Middle Archaic); Piedmont Stemmed Types B and D (Late Archaic); Perkiomen, Lehigh and Susquehanna Broadspears, and Orient Fishtails (Transitional); Hellgrammite (Early Woodland); Jack’s Reef (Middle Woodland) and triangles (Late Woodland). The lithic material categories used are: argillite, chalcedony, chert, jasper, metarhyolite, quartz, and quartzite. 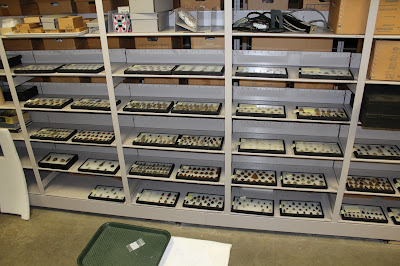 I then confirmed or completed the catalog number for each point, and labeled them with a specimen number as needed. To make sure the catalog number was correctly assigned, I needed to consult the collections archives. Janet Johnson introduced me this database that includes card catalogs, and paper files; some of the documents in those files dated to the early 20th century and can be thought of as artifacts themselves! Janet helped me master the previous and current museum cataloging systems, and a bit about the history of the collections. Cali Holmes, Andrea Carr and a Rapidograph pen helped me to label the artifacts. Once each point was labeled, the catalog number was put into an Access database along with the descriptive and quantitative details of the point. Finally, the points were put in Riker mounts, photographed and stored in draws. 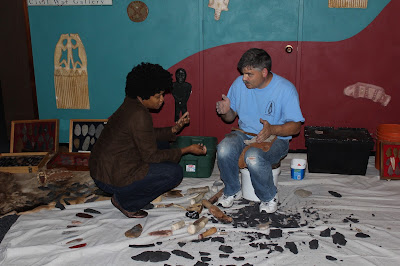 The internship was not just play either! Liz Wagner and I repeatedly battled the beast that is Access. Jim Herbstritt provided garden fresh tomatoes (probably due to the dietary staple ramen noodle discussion) and literature resources. I had the opportunity to flintknap at the State Museum during a Learn at Lunch Time event with a visiting flintknapper, Steve Nissly, which may have involved an assault on innocent chert. There were multiple lithic material type consultations involving our curator in geology, Steve Jasinski and energetic pop-ins from Walter Meshaka (curator in botany). 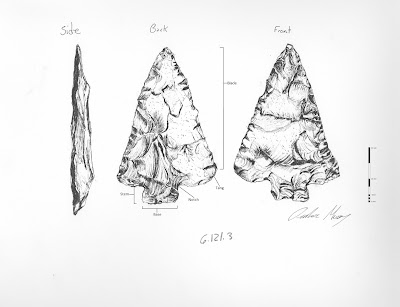 On a lighter side, some of the most memorable events were showing off the archaeology lab to my friends Amber and Jack (Amber sketched the broadspear) and  the cookie-based intern farewell parties! Many thanks to everyone for being consistently available, and enthusiastically supportive. Working with you all presented me with a unique view into the daily working life of a team of career archaeologists! 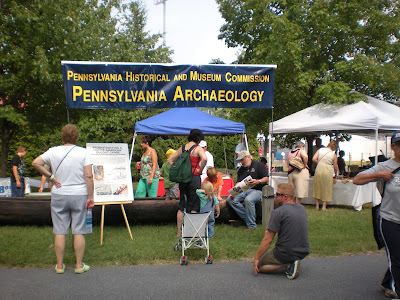 This weekend, August 31st through Monday September 2nd, our staff along with a few volunteers will be participating in the 16th annual Native American Pow-Wow on City Island, Harrisburg as part of the 2013 Kipona Wine, Art and Blues Festival, the Capital City’s send-off for the unofficial end of Summer. Situated along Championship Way on the far side of Metro Bank Park, home of the Harrisburg Senators, the State Museum of PA’s Section of Archaeology display will include the ever popular recreated 20ft. dugout canoe, artifacts recovered from excavations conducted on City Island in years past, informational brochures on State Museum programs, children's activity worksheets, and the hot off the press 2013 Archaeology Month poster. Keep your fingers crossed for good weather, and we hope to see you this weekend at the pow-wow on City Island.

For more information, visit PAarchaeology.state.pa.us or the Hall of Anthropology and Archaeology at The State Museum of Pennsylvania .
Posted by PA Archaeology at 3:15 PM