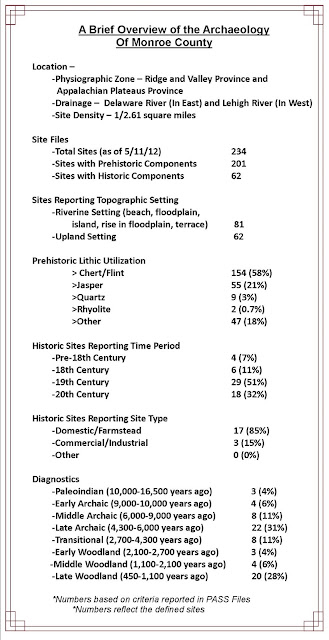 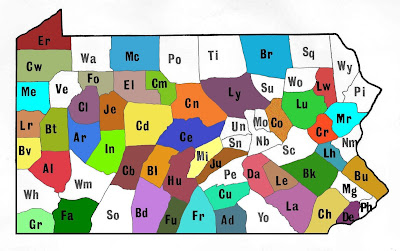 This week we are featuring the archaeology of Monroe County. This county was established in 1836 from parts of Northampton and Pike counties. It takes its namesake from James Monroe, fifth president of the United States (1817-1825). Located in the Pocono Mountains of northeastern Pennsylvania, the county is home to more than 139,000 residents. Bordered by six counties and the Delaware River it is one of the most picturesque regions of the Commonwealth. Driven by an active resort industry, Monroe County is a favorite area of vacationers throughout the year where the Pocono International Raceway, “the roadside strip” and the county’s many ski slopes are among its attractions. Two higher institutions of learning are also located in Monroe County – Monroe County Campus of Northampton Community College at Tannersville, Pennsylvania and “on the Upper Delaware” East Stroudsburg University of Pennsylvania at East Stroudsburg, Pennsylvania. 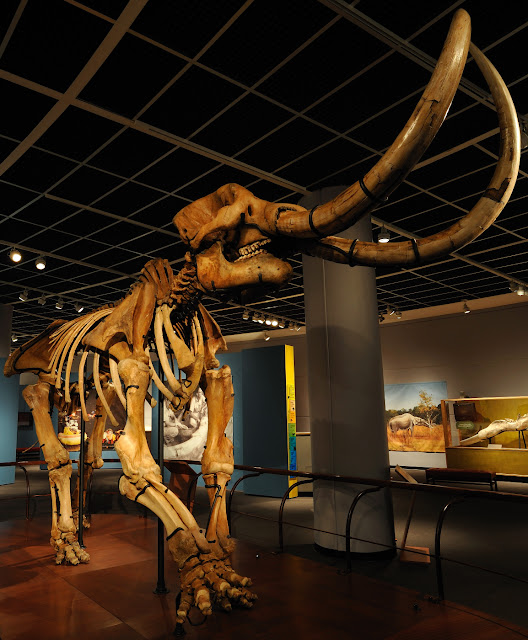 Marshal's Creek Mastodon on display at The State Museum of Pennsylvania

Monroe County is largely contained in the Glaciated Pocono Plateau and Blue Mountain Sections of the Ridge and Valley Province with a smaller region in the Glaciated Low Plateau Section. These sections were once covered by thick ice deposits many years ago. The Lehigh and Delaware River systems with their numerous tributaries drain Monroe County and many of the smaller tributaries emanate-originate from bogs and freshwater lakes – products of the last glacial period. Twelve thousand years ago these water rich environments were home to numerous different plants and animals-including mastodons, an elephant-like animal, now extinct. One of these creatures was accidently discovered in 1968 when an employee of the Lakeside Peat Humus Company in Marshalls Creek, Monroe County snagged the skull with his dragline bucket.  With the permission of the land owners John and Claire Leap, local volunteers and staff from The State Museum of Pennsylvania) recovered over 90% of the mastodon buried by three feet of peat and muck. Its two massive tusks of ivory were never found in spite of a diligent search for them.  Radiocarbon dating of the bones indicate that the beast perished more than 12,000 years ago at about the time Paleoindians were spreading across the Northern Hemisphere.

A search of the Pennsylvania Archaeological Site Survey (PASS) documents 234 prehistoric and historic archaeological sites in Monroe County. This is one site for every 2.61 miles and the majority of these are prehistoric (n=201) versus historic (n=62). In terms of topographic settings for these sites the numbers are about evenly split between riverine (n=81) and upland (n=62). Lithologically, there was a prehistoric preference for the use of chert and jasper for all diagnostic point types. Late Archaic and Late Woodland sites dominate with Middle Archaic and Transitional sites equally represented. These were followed by Early Archaic and Middle Woodland and Paleoindian and Early Woodland in that general order of frequency.
Some of these sites were reported and dug by amateur archaeologists interested in documenting their locations and the artifacts found on them. Additional site surveys were conducted by Penn DOT, the Army Corps of Engineers and the national Park Service. One of the largest surveys was conducted by Dr. W. Fred Kinsey of Franklin and Marshall College between 1964 and 1972. This work was performed in preparation for the Tocks IslandReservoir project and included the testing of 11 sites and the recordation of many more, between the Delaware Water Gap in the south and the town of Matamoras in the north.  Interestingly, although the river is part of a National Recreation area, the controversial dam was never built.  The major sites in Monroe County were Camp Ministerium (36MR8) and Camp Miller (36MR12). These produced multiple prehistoric occupations dating to the Late Archaic (6000 – 4300 years ago) and Woodland (2700 years ago – 1500 AD ) periods. 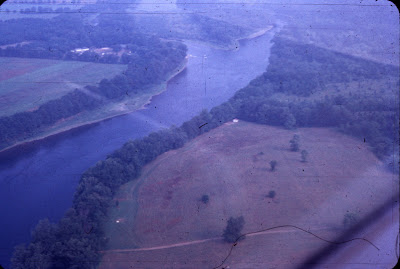 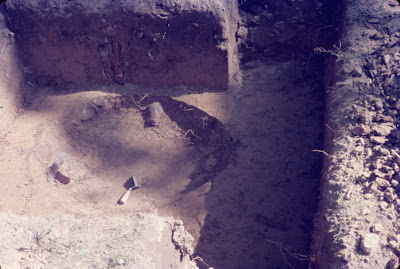 At Camp Ministerium a total 3600 square feet were excavated.  In this area archaeologists mapped and excavated a total of 32 basin and cone shaped pit features and three cobble lined hearths. These features were scattered across the site but no house patterns or activity areas such as corn processing could be identified. Twenty nine features yielded artifacts, the greatest percentage were classified as broken pottery sherds and projectile points. Most of the pottery was associated with the Late Woodland Period. The Owasco style (see below) or type was the most common, along with later types known as the Tribal series because they are associated with historical/ethnographically known tribes from the region.

At Camp Miller, thirteen pit features and scattered postmolds within an 1800 square foot excavation area. As with Camp Ministerium, the features at Camp Miller appeared scattered over much of the site although the larger and more productive features were near the western end of the excavation. Again, pottery of several Owasco types was present, though Tribal series pottery was not.  Based on projectile points this site was also occupied during the Transitional (4300 - 2700 years ago) and Early Woodland (2700 – 2100 years ago) periods. 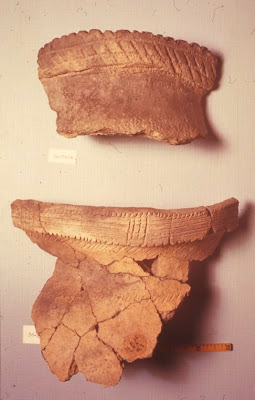 In another large survey project, Penn DOT commissioned a site survey prior to road development in the Marshall’s Creek area, Monroe County. The survey found numerous sites used by prehistoric people to quarry chert for the production of stone tools.  The chert is found in relatively thin layers in limestone.  The quarries are small, very different from the jasper, metarhyolite and argillite quarries. Rather than digging holes into the bedrock, these sites illustrate how the chert was pried out of the limestone beds. The most intensively used quarries were found surrounding swamps and lakes which would have contained a variety of food resources.
We hope you have enjoyed this journey into the archaeology of Monroe County. We encourage you to explore the archaeological heritage of your county either in past blog posts on this site, or through publications in such journals as Pennsylvania Archaeologist, The Archaeology of Eastern North America or the Journal of Middle Atlantic Archaeology. Join us next week when we search Montgomery County’s archaeological heritage through “This Week In Pennsylvania Archaeology”.


For more information, visit PAarchaeology.state.pa.us or the Hall of Anthropology and Archaeology at The State Museum of Pennsylvania .
Posted by PA Archaeology at 3:26 PM