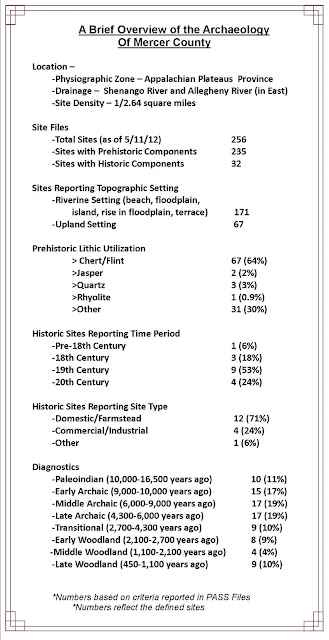 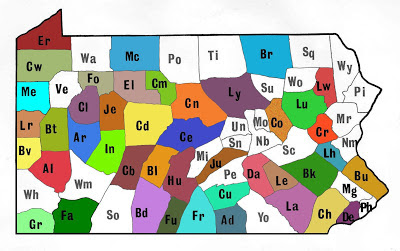 This week TWIPA lands in Mercer County in northwestern Pennsylvania. Mercer County is bounded by Crawford County to the North, Lawrence and Butler Counties to the South and Southeast respectively, and by Trumble County, Ohio to the West. Mercer County is situated entirely within the Northwestern Glaciated Plateau Section of the Appalachian Plataeus physiographic province, and is drained primarily by the Shenango River, although a small portion of the northeast corner of the county is drained by Deer Creek, a tributary of the Allegheny River. The topography of Mercer County has been described as having broad, rounded uplands and deep, steep-sided, linear valleys partially filled with glacial deposits.

The majority of archaeological sites recorded in the county are prehistoric in nature, and are fairly evenly distributed across all time periods with the bulk falling into the Early, Middle and Late Archaic. Two and a half times more sites have been identified as having a riverine setting as compared to sites in upland settings. Lithic preferences trend heavily towards chert/flint which is not terribly surprising given the county’s relative proximity to both Flint Ridge and Onondaga quarry sources. 19th Century domestic/farmstead sites represent the lion’s share of registered sites identified as having a historic component.  Mercer County falls into the western region of the commonwealth and these archaeological resources have been investigated and curated at the Carnegie Museum for many years, so much of our research is dependent on published references. 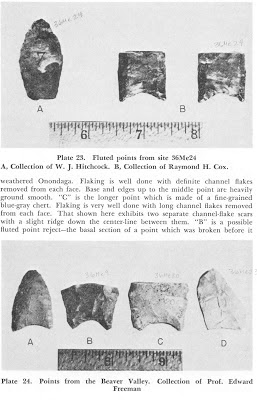 An archaeological survey of the Upper Ohio Valley conducted by William J. Mayer-Oakes, Field Archaeologist at the Carnegie Museum, provides some of the earliest references for the pre-history of Mercer County. Mayer-Oakes divided the Upper Ohio Valley by drainage basin and placed Mercer in the Beaver drainage.  By visiting local collectors and conducting minimal testing, he was able to record thirty-one sites in Mercer County.  Mayer-Oakes recorded fluted points representing the Paleoindian period (16,000-10,000 years ago) from fine-grained black chert and mottled blue, gray and brown chert.  Artifacts representing small camp sites of the Archaic period included such stone tools as full grooved axes, adzes, bannerstones, birdstones and a boatstone. This comprehensive survey of sites included artifacts through the Woodland period (2,700 to 450 years ago) including shell tempered pottery and triangular points. Briefly mentioned is the 18th century historic Indian site of Pymatuning Town (36Me11). 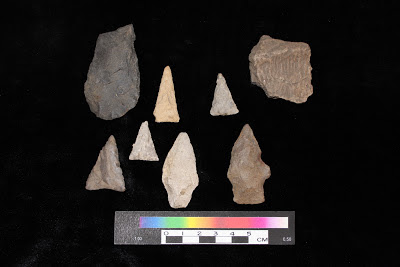 Lieutenant Thomas Hutchins who was a British officer surveyed and recorded the area north of Pittsburgh and produced a map in 1761 which records the site as Pematuning.  Hutchins describes the village as, “15 Houses at Peymatuning last fall and consisted of 40 Warriors ...” Later maps show that the village existed for another fifteen years, although its exact location varied. In 1785 the area was surveyed by Andrew Henderson charged with laying out land plots for donation to Revolutionary War soldiers as payment for their service. Henderson noted that there would have been cabins, “but are long since destroyed by fire”.  He suggests the site was abandoned by 1777, but it is generally agreed that this date was closer to 1778- sometime after the “Squaw Campaign” of March, 1778.
Archaeological investigations at Pymatuning Town were conducted first by Donald Cadzow in 1934 and later by Don Dragoo of the Carnegie Museum.  Dragoo’s investigation successfully located the village area based on refuse pits filled with fragments of 17th century glass, china, pewter spoons and handwrought nails. Dragoo found that the area was heavily disturbed being previously dug by pot hunters.  The investigation eventually located the associated cemetery, but it had also been vandalized. Dragoo confirmed Henderson’s observation regarding placement of cornfields on the bottomlands, ideal for crops and too close to the water for the village. The village and cemetery were located on a high terrace, protected from flooding.    Interviews with local residents indicate that the evidence of looting had likely occurred in the 1890’s and was possibly associated with the burying of a farm horse during that period.
Moving forward a few hundred years to the 1940’s takes us to the military site of Camp Reynolds (36Me243). This site was recorded during a pipeline project, one of several in which recent sites were identified.  Recorded in Pymatuning Township this military camp was used both as a processing station for troops headed to Europe, but also as a German prisoner of war camp. The camp was initially referred to as the Shenango Personnel Replacement Depot, it encompassed 3300 acres and was operational from 1942 to 1944.  Estimates of a million soldiers passed through this camp for processing before deployment during WWII.  Its location along major rail lines facilitated timely troop movements to east coast ports. As noted, the site was used as a POW camp for German prisoners, housing up to 1800 occupants before closing in 1946.  The majority of the structures were dismantled or turned into an industrial park for the community.   Little evidence of the camp remains today, making the recording of this site archaeologically necessary for its future preservation.

We hope you have enjoyed this brief review of the archaeology of Mercer County.  Hopefully it will inspire you to seek such publications as, Prehistory of the Upper Ohio Valley, Indian Villages and Place Names in Pennsylvania or any of the journal articles on archaeology conducted in Mercer County and published in Pennsylvania Archaeologist.  Understanding and exploring our archaeological heritage is pivotal to our understanding of human behavior and our ability to change and adapt over time- just as the peoples of Mercer County have done for thousands of years.


For more information, visit PAarchaeology.state.pa.us or the Hall of Anthropology and Archaeology at The State Museum of Pennsylvania .
Posted by PA Archaeology at 3:32 PM