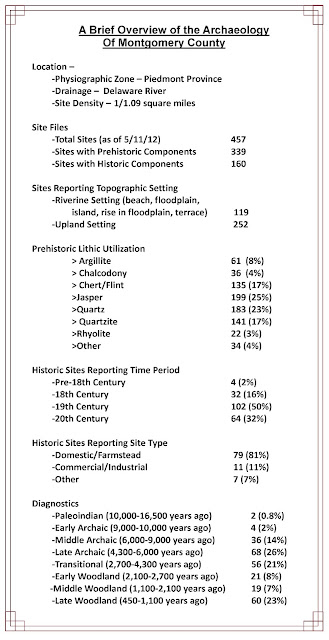 This week our journey by county through the archaeology of Pennsylvania takes us to southeastern Pennsylvania and Montgomery County. This county is mainly situated in the Gettysburg-Newark Lowlands Section of the Piedmont Province. A small section of the Piedmont Uplands Section extends into the southern boundary of the county.  The county is drained by the Schuylkill River which forms its western border. Major tributaries include the Wissahickon and Perkiomen creeks. This region is characterized by rolling topography typical of the Piedmont province.  Most of the county is upland in nature and this is reflected in site locations with 68% of the sites located out of the stream valleys.
The density of sites is high compared to other counties, and it is usually in the top ten list of counties by site density. Although located adjacent to Philadelphia, until the 1980s, farming was common and most of the sites were recorded by amateur archaeologists. Since the 1980’s, at least 270 state or federally mandated archaeological surveys have been conducted in the county which has contributed to the recording of a high number of sites. Unfortunately, urban sprawl has destroyed many of these sites, especially in the southern half of the county.
There are a wide variety of lithic resources suitable for stone tool manufacture available in the southeastern corner of the state which is reflected in the prehistoric artifacts. Most of these sources are found in bedrock formations in the surrounding counties but several lithic types are also found in cobble form in the Schuylkill River. Jasper is the most common toolstone. This is generally the highest quality material in the region and can be found in Lehigh and Berks counties to the north. Quartz and chert are available in bedrock formations to the north and west of the county but also in cobble form in the surrounding rivers. Quartzite can be found in massive outcrops to the west in Berks County around Reading. Although not as frequently represented in stone tools as might be expected, argillite is available in the county along the Schuylkill River and in very large quantities in eastern Bucks County. It is surprising that this lithic type is only found on 8% of the sites. Finally, rhyolite, found 130 miles to the west in  Adams County, is present in small quantities.

The presence of these resources- water, rolling topography and good lithic materials for tool production- created a desirable setting for prehistoric activity in the region. Very little evidence of the Paleoindian period (16,000-10,000 years ago) has been found in this county.  As discussed in previous blogs, Paleoindians moved across the landscape foraging in the warm months and hunting during winter months.   As the cold Ice age environment changes during the Archaic Period (10,000-4,300 years ago), we see the end of fluted points which are a marker of the Paleoindian period and the emergence in the Early Archaic Period of corner notched and side notched projectile points.

Again, very little evidence has been recovered representing this period in Montgomery County in controlled excavations, although a number of upland lithic scatter sites have been reported.  These sites provide evidence of lithic reduction with an emphasis on late stage manufacturing and maintenance of stone tools.  Meaning that the material is obtained elsewhere and reduced to a biface or core, then transported to these upland sites where they are further reduced to form a tool; leaving the debitage, lithic flakes, produced from this activity.  The warmer, wet environment of the middle and later Archaic period produced an increase in vegetation and subsequently an increase in food sources such as small game, nuts and berries.  This change in environment resulted in less mobility and is reflected in the lithic assemblages from the Late Archaic and Woodland periods.  A greater percentage of artifacts from this period are produced from quartz and quartzite, locally available resources.
An archaeological investigation conducted prior to the development of the Heritage Golf Club resulted in the recording of six prehistoric sites of which several were lithic scatter sites utilized from the Late Archaic period through the Late Woodland period.  Analysis determined that these sites were temporary “stations” focused on plant resource procurement.  Identified seed/fruit remains recovered from Heritage Site 3A( 36Mg346) include heather, goosefoot, buttercup, mint and acorn.  All of these specimens are indicators of late summer occupation as this is when these plants ripen and mature.  The lack of pottery at this site also supports the determination that occupation periods were brief and seasonal.
A major survey conducted along the lower Schuylkill River Valley was performed by Kingsley, Robertson and Roberts (1990). Based on 184 sites documented in this survey, they were able to develop a culture history for the region including an examination of lithic raw material resources, changing subsistence practices, and the evolution of settlement patterns. This survey focused on the floodplain of the Schuylkill River and this is commonly the location of Late Archaic base camps and Late Woodland villages. However, for the Archaic period, it was postulated that the region was used for hunting and plant food procurement but not fishing and no large base camps were identified. No Late Woodland villages were discovered and Kingsley et al.1990,  believe that the valley was only sporadically used during the Late Woodland period. They hypothesize that the region may have served as a buffer between different Late Woodland cultures.
The Unami Indians, a subgroup of the Lenape are recorded as living in established villages in this county during the Contact Period which occurred about 450 years ago.  Historic documents indicate the Lenape Indians were trading with the Dutch prior to 1624 when Fort Nassua was constructed across from the mouth of the Schuylkill, in present day New Jersey.  When William Penn received a land grant for a tract of land in America it led to European colonization of Pennsylvania and the eventual displacement of the Lenape.  Penn purchased lands from the Lenape chiefs in 1683 that became Montgomery County which led to an influx of settlers seeking religious freedom.
Graeme Park was constructed in 1722 and was the summer home of Provincial Governor Sir William Keith.  The home was named “fountain low” because of the many springs located on the property which included the house and several out buildings. This property was purchased by Thomas Graeme who made many upgrades to the interior furnishings which included delft tiles and marble fireplace surrounds.  The home changed families several times before it was eventually donated by the Strawbridge family to the Commonwealth in 1958.  The Pennsylvania Historical and Museum Commission (PHMC) administer the property in partnership with the Friends of Graeme Park  which permits visitors to tour the original home and grounds.  Archaeology was first conducted at this site in 1958 and was instrumental in reconstructing the Graeme’s summer kitchen.  Also located were historically documented gardens, a cobblestone road and a smokehouse.  Excavations in the formal gardens revealed brick walkways and stone perimeter walls.  The low number of artifacts recovered suggests meticulous care of the gardens, since few ceramics were discovered.  This differs from the normal colonial household that would routinely discard ceramics in close proximity to the house.

Hope Lodge is a beautiful example of early Georgian architecture, constructed between 1743 and 1748 by a wealthy Quaker entrepreneur.  Samuel Morris operated a mill nearby known as Mather Mill.  These properties also passed through several families before eventually being donated to the Commonwealth in 1957.  Hope Lodge  benefitted from preservation efforts in the 1920’s by the Degn family who cared for and restored the house and grounds. Archaeology conducted here revealed a property that had undergone many changes and unfortunately no intact wells or privies were located which would provide us with tangible evidence of the everyday lives of these occupants.

Montgomery County is rich in historical sites and our time here doesn’t permit us to cover them all, but we would be remiss in not addressing Valley Forge. Valley Forge served as the winter camp for General George Washington and the Continental Army during 1777-1778. Archaeology was conducted as early as 1921 at this site primarily focused on locating the hut encampments and recovering artifacts which would provide evidence of the daily lives of these soldiers.  Washington’s original orders for the design of this camp called for the construction of huts fourteen by sixteen feet along streets with officer’s huts to the rear. Archaeology revealed that these huts were significantly smaller (twelve feet square was large) and based on their irregular placement, they do not appear to have been laid out along streets.
Excavations produced military artifacts including buttons, musket balls and ceramics used by this diverse group of soldiers. Archaeologists continue to examine these collections and those produced during current excavations  to better understand the hardships endured during this famous winter encampment.

We hope you have enjoyed this journey through the archaeological heritage of Montgomery County and you will seek additional reading at the links provided above or through the publications listed in the bibliography.  Understanding and exploring our archaeological heritage is pivotal to our understanding of human behavior and our ability to change and adapt over time- just as the peoples of Montgomery County have done for thousands of years.

For more information, visit PAarchaeology.state.pa.us or the Hall of Anthropology and Archaeology at The State Museum of Pennsylvania .
Posted by PA Archaeology at 5:33 PM