Plant Foods of the Middle and Late Woodland

Following the path of our blog series on the “Evolution of Foodways” we now move on to the later Woodland periods. However, before we discuss the kinds of plant foods that were used by indigenous groups of this period let’s take a look at how the environment changed human adaptation after the Transitional Period and feature some of the hallmark artifacts of the time.

Around 2000 years ago the climate of Pennsylvania was generally cool and moist and the forests were dominated by dense growths of Quercus spp.(Oak), Tsuga spp.(Hemlock) and Castanea spp.(Chestnut) that supported a plethora of birds and animals. Valley bottoms grew in size because of the amplified alluviation of the floodplains that, often, flooded their banks thereby enriching the soils for plant growth. By about 1500 years ago there appears to have been a trend to a slightly warmer yet moist climate that continued to support the healthy growth of hardwoods and great hemlocks . The valleys began to stabilize with fewer seasonal floodings occurring. At the beginning of the Late Woodland period around 900-1000 AD., the climate returned to cooler and drier conditions giving rise to conifer growth, namely Picea spp. (spruce) and Pinus spp. (pine) with a return to more frequent flooding of the river valleys. A dramatic change occurred around 1300-1350 AD., with the onset of the Neo-Boreal or what climatologists called the“Little Ice Age” when conditions for crop failures rose dramatically throughout the world. This was in complete contrast from the earlier Medieval Maximum period at the Middle to Late Woodland period transition when crops and the climate were much kinder to humans and their environment. The “Little Ice Age” lasted well into the Historic Period - ending around 1850 AD. when the United States was rapidly expanding westward.

Each succeeding cultural period had its definitive stone point style. The trend seems to have been from fluted points in the Paleoindian period to atlatl spear points and knives in the Archaic /Transitional/ and Early Woodland periods to generally smaller Middle Woodland and Late Woodland forms. It was during the Middle to Late Woodland transition circa. 700/850-900 AD. when the bow and arrow seems to arrive on the scene. Indeed, this was a technological break in the cultural record that was hallmarked by small corner notched and triangular-shaped points. 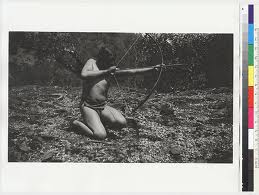 Ishi with bow and arrow 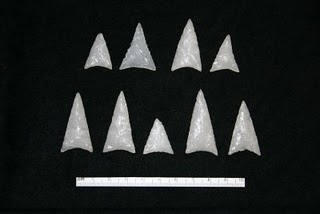 Triangular Points
Now, on with the foods. Many nut species are present at archaeological sites of this general period. Common were Carya spp. (hickory), Juglans spp. (butternut), Castanea spp. (chestnut) and a host of other species. Although starchy foods such as arrowroot and wild artichoke tubers would have been available for human consumption along with a host of other fleshy foods the archaeological evidence is rare. Strides being made through the analysis of starch grains may well be the tool that unlocks many of the hidden secrets associated with certain prehistoric plant use. Beginning with the Middle Woodland period and extending into the Late Woodland/Late Prehistoric period, Pennsylvania’s indigenous Indian populations were propagating some native plant foods of the Eastern Agricultural Complex. Although there are no direct correlations with radiocarbon dates for the Middle Woodland the plant foods of the period include Cucurbita pepo (squash/gourd); Chenopodium spp. (goosefoot); Polygonum spp. (knotweed or smartweed); Hordeum pusillum (little barley); Phalaris caroliniana (maygrass); Iva annua (sumpweed). Most of these plant foods are well represented at archaeological sites of the following Late Woodland/Late prehistoric period with the inclusion of Helianthus annuus (sunflower). 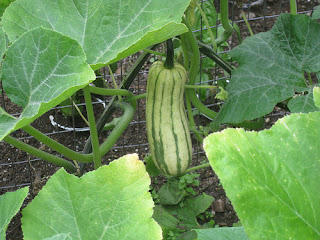 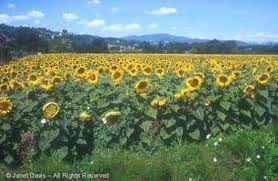 Sunflower
Many of the plants that Native Americans cultivated as a source for food arrived in northeast North America from Mexico long ago. The paleobotanical record shows that these foods began to spread far back in time and the vast Mississippi River valley that drains much of the central plains region of the United States was the principal route by which people and their ideas spread into the remote interior of North America.

About two thousand years ago, beginning with the Early/Middle Woodland period transition several of these plant foods became extremely important to prehistoric Native Americans living in the Mississippi Valley and its wide spread tributary regions. Corn’s ancestor, teosinte, a plant of the grass family having hard triangular-shaped kernels, whose origin was Central America has around a 9,000 years old history! Through plant husbandry and selective growing , one of its descendents, Zea mays (corn) evolved from a number of popcorn varieties. Following these were the “southern dents” and the “northern flints”, the varieties that essentially comprise the corns that are grown and consumed today. 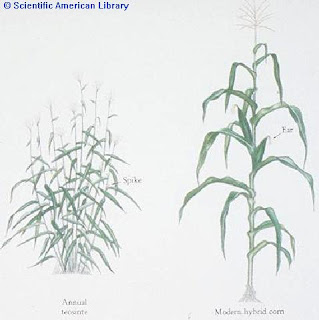 Although the antiquity of beans in the Eastern Hemisphere has the equivalent antiquity of corn in the Western Hemisphere, cultivated beans (Phaseolus) apparently did not appear until much later in our part of the world. As the evidence is now viewed, the earliest beans were recovered from the buried dusty soil deposits of a dry Peruvian site called Guitarrero Cave. Beans from that site are about 4000 years old.

Beginning with the 1960’s investigations of archaeological sites, an archaeological recovery technique called flotation was developed that broadened our knowledge regarding plant foods and their implications for use among prehistoric societies. As previous TWIPA blogs have shown, many prehistoric sites where this method of archaeological recovery was employed, reveals a diverse assemblage of plant utilization from Paleoindian to the Late Woodland periods.
Throughout the Upper Ohio Valley, Susquehanna Valley and the Delaware Valley corn and beans were without question the principal plant crops grown and eaten by prehistoric groups. As well, some of the plant byproducts from corn made useful objects such as sandals, mats, salt bottles, ceremonial masks, etc. Many of these unique items have survived the ages for us to see in museums throughout the world.
The earliest corn in Pennsylvania is dated to 2300 years ago. It is a small 16 row popcorn cob from Meadowcroft Rockshelter located in the Cross Creek drainage of the Upper Ohio Valley. Corn from later occupations within the rockshelter contained 10, 12 and 14 row cobs thereby stratigraphically demonstrating their younger age. Corn recovered from the Sheep Rock Shelter, a site flooded by the Raystown Reservoir has not been radiocarbon dated so its antiquity cannot be ascertained at this time. Dated corn specimens reported from Pennsylvania, bracket the terminal Middle to Late Woodland transition and later Late Prehistoric periods. The earliest corn dates are around AD 950, and are associated with the Clemson Island/Owasco occupations of the Susquehanna Valley. Strontium analysis of bone from this period clearly show that the consumption of corn exceeded 50% of the indigenous diet at this time. By the 13th century when village life became more settled the dominant variety is the 12 row Flint corn. 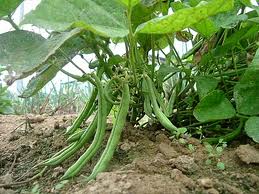 Common Bean﻿
The common bean Phaseolus vulgaris does not arrive in Pennsylvania until sometime in the 13th century where carbonized specimens show up in archaeological site contexts of the Susquehanna Valley. By then, village life became more structured with planned fortified settlements being the norm. One must remember that the introduction and propagation of crops such as corn and beans, supported larger populations. This situation reduced the size of buffer zones between competing social groups (ie. hunting and fishing territories, firewood and new land to replace old fields depleted of nutrients). This was probably at least part of the explanation for increased warfare during the Late Woodland period. 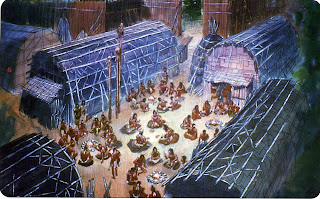 By comparison, the Delaware valley seems to have experienced a different set of circumstances in terms of the paleobotanical subsistence record and site usage during these later periods of prehistory. Planned villages appear to be non-existent! Although corn and beans occur in good archaeological contexts at these sites their contexts suggest seasonal usage at floodplain locations adjacent to fishing grounds. Few structural remains such as houses and no palisades have been found that typify some level of permanency as regards to land usage during the later Woodland periods. Sites normally show a predilection for short term use by virtue of trash filled pits containing much of the assemblage normally representative of site use. Yet the carbonized corn and bean remains that suggest agricultural use are present in the refilled trash pits. Whatever the case, we do know that the people living the Delaware Valley at this time were consuming corn and beans as well as many wild plant foods.

For more information, visit PAarchaeology.state.pa.us or the Hall of Anthropology and Archaeology at The State Museum of Pennsylvania .
Posted by PA Archaeology at 2:47 PM