The Evolution of the Archaic Period Diet

This week we will continue with our presentation on the evolution of “foodways” in Pennsylvania by describing subsistence patterns during the Archaic period. This period dates from 10,000 to4,300 years ago and is divided into the Early, Middle and Late stages.


Climatically it begins at the end of the Ice Age and the onset of the modern climate or the Holocene epic. It is characterized by temperatures and precipitation that quickly rose to near modern conditions with the spruce parkland of the Ice Age being replaced by a spruce/pine forest. Deciduous trees, such as oak, were mainly found on terraces along the larger rivers and streams. Otherwise, the land that would become Pennsylvania was covered by a dense, coniferous forest. Food resources were limited and concentrated in river valleys, upland swamps and bogs.

The major technological change defining the Early Archaic was found in the shape of spear points. Fluted and lanceolate shapes or forms changed to mainly corner-notched forms such as Kirk, Palmer and Charleston types. 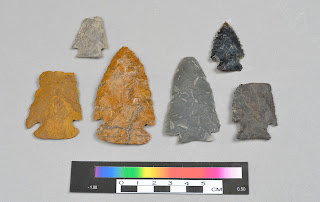 As is true for the Paleoindian period, very few food remains are preserved at Early Archaic sites and subsistence is inferred from tool types and the potential foods available in the Holocene environment. Population size did not significantly increase over Paleoindian times and bands consisted of less than five families (20 – 25 men, women and children). It is assumed that people of the Early Archaic period were generalized foragers i.e hunters and gatherers. In many ways the subsistence patterns of the Early Archaic were not much different than those of the Paleoindian period. Bands moved over large territories to the location of concentrated and easily collected foods. Native Americans no longer exploited migratory game as was probably done during earlier Clovis times but the hunting of elk, deer and small game was common. Hunting animals and fishing probably continued as the main source of food contributing 50% of the caloric intake of each person. The remainder of their diet consisted of seeds, nuts, roots and berries. However, there is little evidence that stone tools were used to prepare these foods although the processing aspect was probably accomplished with wood, bone or antler tools that are not normally preserved in the archaeological record of prehistoric Pennsylvania. 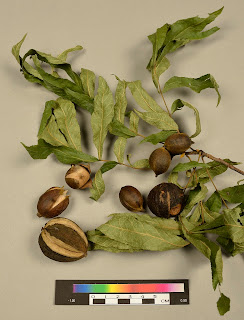 By approximately 9,000 years ago, the beginning of the Middle Archaic period, broad leafed trees were filling the forests. A wide variety of nut bearing trees (walnut, hickory, butternut, oaks with acorns) seed producing grasses, edible roots and berries became available for consumption. Along with a greater variety of mammals (deer, beaver, bear, rabbit), birds (turkey, ducks) and fish (Atlantic sturgeon, shad, Atlantic salmon), there was a huge increase in the quantity of foods available to humans. Tools to exploit the hardwood forest such as axes and adzes became common and the atlatl (spear thrower) was used in hunting. Although the available data base is limited, charred acorns and walnut shells began to appear in the archaeological record. Grinding stones for processing seeds and nuts begin to appear, as do and netweights for fishing. These tools suggest that plant foods and fishing were becoming more important and were being processed in larger numbers. Generally, it is simply easier to collect large quantities of seeds or nuts, than it is to kill and process a deer for example. In addition, plant foods usually preserve longer than animal foods. Based on the Pennsylvania Archaeological Site Survey files, there is a 150% increase in the number of sites from this time period compared to the Early Archaic and it is believed that this represents a significant increase in human populations. Bands continue to follow a regular seasonal pattern of movements but their territories become smaller than during the Early Archaic period. Band size does not seem to have increased but there appears to be many more bands in an overall larger population. However, food resources in this environment were so plentiful that there was little need to develop special tools to intensify their exploitation of the environment. 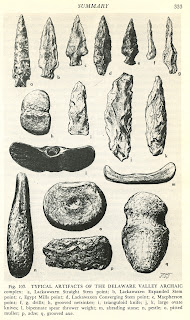 The Late Archaic period is an intensification of trends developed during the Middle Archaic period. Human populations continue to increase in size and band size increased to six to eight families (25 – 35 men, women and children). Grinding stones and netweights become very common. Nets may also have been used to bring down nesting and migratory birds. By the Late Archaic, band size increased to the point where these foods needed to be more efficiently processed and in larger quantities to increase the caloric intake of the band. Large roasting hearths appear and seem to represent large scale food processing. These features are frequently found on floodplain sites and were initially thought to represent large fish drying platforms. However, more recent data suggests that they were used to process nuts or tubers (roots). As during previous times, the bands changed in size depending on the foods being exploited but they are now larger and seem to have occupied the sites for longer periods of time. During spring fish migrations and fall nut harvests, these groups may have grown to 50 or more people. In winter, they broke into smaller groups to harvest deer and small game in upland camps. Finally, by the end of the Late Archaic there is good evidence in the form of charred nut shells and preserved plant residues that show a greater variety of plant foods, especially seeds, were being exploited. In addition, there are indications that Native Americans began to focus more of their time collecting and growing seed plants. Squash, grown in small gardens were likely the first cultigens supplementing the Archaic diet.

The Archaic period is an interesting time of population growth in a relatively bountiful environment. During the Early Archaic period, human populations remained small, the environment did not contain large amount of food resources and the types of tools were not much different than during Paleoindian times. Beginning in the Middle Archaic period, human populations had grown significantly but food resources also increased. There was little need to develop stone tools to maximize the processing of these foods because of their abundance. By Late Archaic times, human populations continued to increase and food processing tools such as grinding stones and net sinkers became common and necessary to support the large population. Throughout this time period, Native Americans practiced a regular pattern of seasonal movements to exploit food resources; the group moved to settings where food resources were concentrated and easily processed. There are no indicators of significant changes in social organization or trade.
For more information, visit PAarchaeology.state.pa.us or the Hall of Anthropology and Archaeology at The State Museum of Pennsylvania .
Posted by PA Archaeology at 5:02 PM