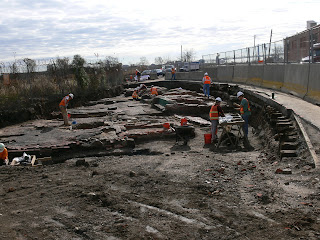 Dyottville Glass Works (36Ph37) excavation, facing South
Welcome back! We trust all our readers have recovered from their tryptophan induced stupors of last week’s annual tribute to gastronomic excess. To burn off those extra helpings of stuffing we all enjoyed, some of the staff from The State Museum of PA's Section of Archaeology and the Bureau for Historic Preservation participated Monday in a field visit to an archaeological site along the Philadelphia waterfront, currently underway as part of a PennDoT project to improve a portion of Interstate 95. 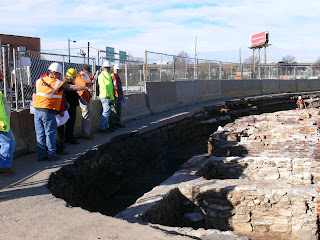 View of  Dyottville Glass Works (36Ph37) facing Northwest, I-95 in background﻿
Down by the river (please excuse the Chris Farley reference) and a stone’s throw away from whizzing interstate traffic, a team of archaeologists from URS Corporation, lead by Doug Mooney, have uncovered the remains of an important part of our nation’s emerging industrial might of the 19th Century, the Dyottville Glass manufacturing complex along the Delaware River. 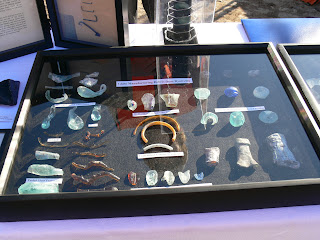 sample of glass bottle fragments and other glass objects recovered during excavation﻿
“Dr. Thomas Dyott arrived in Philadelphia from England in the 1790s. Starting out as a manufacturer of patent medicines, he eventually acquired a glass factory near Kensington.” (Cotter, Roberts and Parrington pg. 451). While the glassworks would continue production throughout the 19th century, Dr. Dyotts involvement was comparatively short-lived. “The factory was closed down in 1839 when its proprietor was found guilty of fraudulent insolvency and jailed. It reopened under new management three years later.” (Cotter, Roberts and Parrington pg. 452). 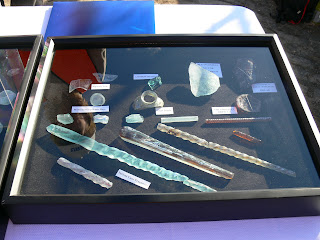 fragments of glass walking canes from ﻿Dyottville
Not surprisingly due to its proximity to the Delaware River, prehistoric artifacts such as triangular projectile points and fragments of native-made pottery dating to the Late Woodland period were discovered at the site underneath the multiple layers of historic occupation.

During the visit, it was noted that with a great deal of attention being focused on archaeological investigations that have taken place near Center City (in association with Independence Hall, the National Constitution Center, and President Washington’s house, etc.), residents of the somewhat removed Kensington and Fishtown neighborhoods of the city have taken a measure of pride in a piece of their own heritage discovered just a few blocks from their doorsteps. Yo!

Click here for an article that Hayden Mitman wrote for the Northeast Times about an artifact exhibit at the Kensington CAPA High School, and here for a more in-depth overview of Dyottville by Ian Charlton of the Historical Society of Pennsylvania for Philaplace.org.


Thanks go to Doug Mooney, George Cress and Stephen Tull of URS Corp. and Cathy Spohn, PennDoT District 6 Archaeologist, for coordinating what proved to be an interesting and informative visit to an archaeological site in a dense urban-industrial setting on an unusually balmy late November afternoon.
Reference:
(1992) Cotter, John L.; Daniel G. Roberts; Michael Parrington
The Buried Past: An Archaeological History of Philadelphia. University Press, Philadelphia
For more information, visit PAarchaeology.state.pa.us or the Hall of Anthropology and Archaeology at The State Museum of Pennsylvania .
Posted by PA Archaeology at 2:56 PM