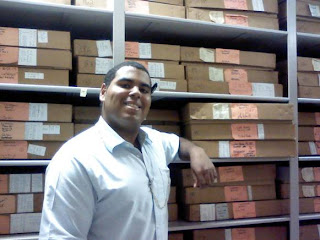 My name is Thomas Wambach and I am an Anthropology/Archaeology major at Indiana University of Pennsylvania (IUP), about to enter my junior year. This summer, I participated in an internship with the Pennsylvania Historical and Museum Commission (PHMC), Archaeology Section located in Harrisburg, Pennsylvania. I received this internship via the Diversity Internship Program, whose goal is to increase staff cultural diversity in Pennsylvania’s museums and cultural organizations. As I am of Haitian American ancestry, I found the program to be captivating as well as a worthwhile experience. It certainly has increased my knowledge of archaeology outside the classroom by helping me learn in a professional environment, under a well qualified mentor in my field.

As an intern in the Archaeology Section, I accomplished a number of personal and professional goals, and worked on a variety of different tasks and projects. My main project of focus during the internship was the processing of a collection of artifacts from an archaeological site in Clinton County, Pennsylvania known as the West Water Street Site (36 CN 175), located in Lock Haven, and excavated in 1992 by students from the University of Delaware. This was a stratified prehistoric site spanning nearly the entire time span of human occupation of the Susquehanna Valley. The artifacts I worked with dated to the Pre-Middle Archaic, Middle Archaic, and Late Woodland periods of human occupation in Pennsylvania. The first project task involved using printed records of the site’s artifacts, provided by the University of Delaware, to reenter data on artifacts spanning the first section of archaeological excavation at the West Water Street Site into an electronic database. An electronic database was unavailable from the University of Delaware for various reasons. 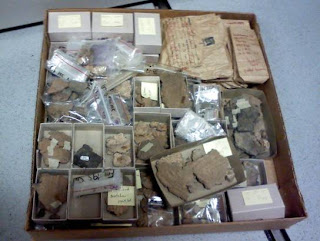 Once this section of the database was reentered and using a printed spreadsheet of the artifacts’ locations, I began to pull artifacts, by catalog number, from their original “pizza box” shaped cardboard boxes in one of the collection holding rooms occupied by the Section of Archaeology so that I could re-house these artifacts. That is to say, I pulled artifacts with catalog numbers 1200, 1400, 1500 etc, and re-housed them with their correct provenience information in larger acid free cardboard boxes. This encompassed a majority of the work I accomplished with the West Water Street Project, and represented a continuation of work performed by previous interns in the Section of Archaeology. The project was initially difficult, because many of the artifacts were scattered among a multitude of boxes in no particular order. Hence, finding the correct artifact was not only tedious, but also presented the possibility that certain artifacts might be missing from their original box. Overall, I estimate that more than four hundred bone, stone, ceramic, and FCR (fire cracked rock) artifacts were pulled and re-housed during my time here.


My time with the Section of Archaeology, however, was not simply limited to this activity. I also attended intern seminars held every Friday by Penn DOT’s Bureau of Design, Cultural Resources Section’s own Mr. Joe Baker. These seminars were organized and designed in a manner similar to a class lecture and discussion course to teach interns valuable lessons on historical preservation in Pennsylvania and the rest of the country, especially by introducing the rules and regulation of Section 106 of the National Historic Preservation Act.

Other additional duties included the re-housing of artifacts outside my specific major project activity, and checking climate controls (temperature and humidity) in all artifact collection rooms. During the latter activity, I discovered that dehumidifiers are fickle little machines! I also briefly participated in field work at an archaeological site near Millersville, which was a good way for me to review the excavation and field training skills I’d learned during the summer of 2008 during IUP’s field school course. Moreover, from time to time, I assisted staff in maintaining the museum exhibits and galleries in the State Museum and Archives areas. This activity allowed me to visit the museum, that I had frequented as a child. I also attended an archaeology conference that took place in Harrisburg and I learned, first hand, how the museum receives new artifacts from public and private institutions, as well as donors from across the Commonwealth. 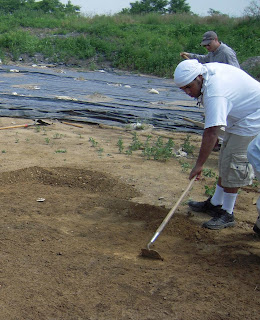 My summer internship also provided me the opportunity to show off my skills as an artist by drawing a reconstructed stone core artifact for one of my colleagues. I certainly hope the sketch proves useful in the future. I also took part in field trips to other museums in the state and to sites under protection by the National Register of Historic Places to evaluate their techniques of reaching the public as well as in artifact and site preservation, all the while comparing my observations with those services provided by the State Museum. In addition, I took part in a small public outreach activity by answering a letter sent by someone who had special interest in local archaeology. I provided the client with resourceful online and book sources so that his research could be completed. Despite the fact that the client was writing from prison, the effort demonstrates that archaeology is for everyone, and that we [archaeologists] are humble public servants.

Most importantly, I established contacts and friendships with the staff here in the PHMC, which I hope will help me in the future. My time here was very educational, fun, and an otherwise memorable experience that I will value greatly. I recommend contacting, interning, or communicating with the PHMC to anyone who is studying archaeology, like me, or to those who are interested in archaeology and/or prehistoric and historical preservation. It certainly proved to be an integral and priceless education and experience for me!
Thank you to all my friends and staff from the PHMC!