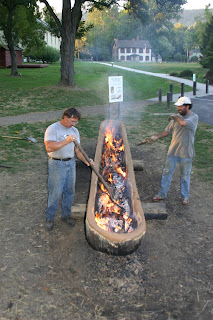 The Pennsylvania Historical and Museum Commission (PHMC) has carved three dugout canoes over the past decade. These have been done as public programs using replicated historic and/or prehistoric tools. The sight of people sometimes dressed in loin cloths, wood chips flying and fire attracts a lot of attention and these programs have been very popular with the public. The resulting dugouts have been included in a variety of presentations, most notably, the annual Pennsylvania Farm Show. Although the publicity is good, these projects are examples of experimental archaeology. They are being conducted to aid in the interpretation of the archaeological record.

As a simple definition, a dugout canoe or, simply, a “dugout” is a hollowed-out log used as a watercraft. It is typically made in a cycle of burning and cutting that includes repeatedly burning the log with a controlled fire and then scraping and chopping out the charred and softened wood with a variety of tools that can be as diverse as shells, wooden scraping tools and stone adzes. 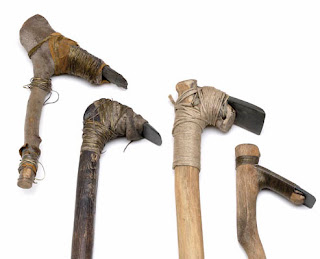 The dugout is likely the earliest form of constructed watercraft in the world, and specimens in Europe have been dated to over 9,000 years old. Considering that humans voyaged to Australia at least 50,000 years ago, dugouts are probably at least that old. In North and South America, dugouts have been the main form of water travel since Native Americans arrived from Siberia over 16,000 years ago. In addition, there has been recent speculation that these early people first arrived by boat. The Northwest Coast seems to have the greatest variety of dugouts with some of these being very large and elaborately designed. In Eastern North American, dugouts are preserved in the lakes and bogs of Florida, Louisiana, North Carolina, Tennessee, Ohio and Pennsylvania. The oldest of these date to over 6,000 years before the present. 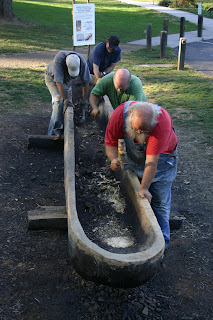 During our 2005 project, we only used tools that were available to the prehistoric inhabitants of the Commonwealth. It has frequently been assumed by archaeologists that stone adzes were a common tool in dugout construction. The stone adzes were made by grinding down basalt into the desired shape. This was time consuming but attaching them to handles was the real challenge. Several handles and one adze were broken but eventually we developed a design that worked very well. Once the dugout was completed, the wear patterns on the stone adzes were analyzed and compared to archaeological specimens. Surprisingly, the wear patterns on the experimental specimens were not the same as most of the archaeological specimens. Our conclusion was that adzes were not commonly used in dugout construction. For more information on dugouts, visit our Building a Dugout page.

For more information, visit PAarchaeology.state.pa.us or the Hall of Anthropology and Archaeology at The State Museum of Pennsylvania .
Posted by PA Archaeology at 1:37 PM