The Trouble with Historians and Archaeologists: Auditing the Frankstown Branch Bridge Replacement

This week's guest blog comes from Ryan Updike, summer intern for PennDoT's Bureau for Environmental Quality and Design. Ryan is a graduate student at Virginia Tech and will complete both an MA in History and an MA in Education next spring. He’s a native of York County.
One important point hit me during my time spent auditing the Frankstown Branch Bridge replacement over the Juniata River in Blair County: wow, historians should really collaborate with archaeologists more often! The results of such a strategic partnership could yield so much more in the way of research and scholarship on resources and features both above and below ground as well as strengthen the bonds between two different camps in Cultural Resource Management. 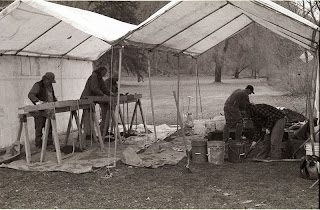 Even the smallest archaeological find can yield rewarding information for a historian. The Phase I and Phase II Archaeological Surveys on this bridge project south of Hollidaysburg on Rt. 36 only dug up 107 artifacts that ranged from historic pottery to prehistoric chert flakes to chert tools. Just like historians, archaeologists rely on the evidence they find, and they then interpret whatever evidence that is found. At the Frankstown Branch site the artifacts showcased a small prehistoric task group or nuclear family group that subsisted by practicing a hunter/gatherer system. The site also contained entirely local resources and features, which bent the analysis toward the site being used by a small band from a local community. 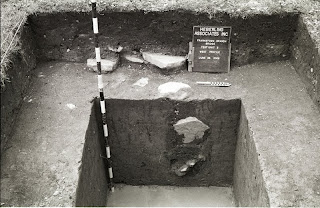 The analysis on the social aspects of the site constituted important as well as usable information to any social historian investigating native cultures. This is the interesting point. This very small fraction of archaeological information can shed light on social habits that historians might set their sights on when investigating local prehistoric communities and their social makeup.
The trouble with historians and archaeologists is they forget what they have in common. When it comes to interpreting the past, historians and archaeologists are slaves to what they find. We are governed by it. If together we work to combine the soiled and written evidence, perhaps we can arrive at a clearer concept of the past. This new vantage point can then serve as a springboard for better management of our resources regardless of location in reference to the ground. 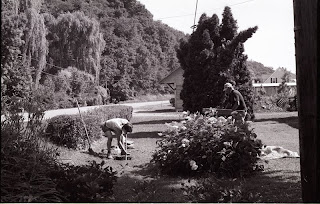 Lastly, this historian must thank the Section of Archaeology at the Pennsylvania State Museum for the opportunity to work with them. Thanks, Janet, Andrea, Liz, Dave and Dr. Carr.

For more information, visit PAarchaeology.state.pa.us or the Hall of Anthropology and Archaeology at The State Museum of Pennsylvania .
Posted by PA Archaeology at 3:38 PM