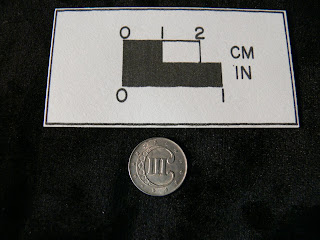 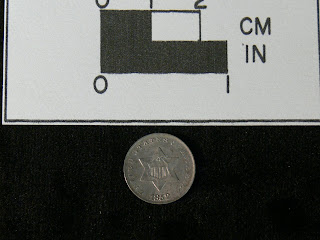 Archaeologists are commonly asked the questions, “Have you found any dinosaurs?”, or “Did you find any gold?” Any field technician worth his or her weight in gold will hopefully correct the inquisitor, by first stating that archaeologists don’t dig for dinosaurs, paleontologists do. As for the matter of gold, such a valuable commodity is normally guarded very closely by its owner and hence rarely finds its way into the archaeological record, the exceptions being extraordinary sites such as a sunken pirate ship or a pharaoh’s tomb. Sadly, sites such as these, the vast majority of archaeologists will never have the occasion to excavate.

Now silver, on the other hand, is more of a working man’s precious metal and its appearance on archaeological sites often, but not exclusively, in the form of currency, acts as an indicator of the general population’s interaction with the material.
Believed to be the only example in the State Museum of PA’s Section of Archaeology collection of over 4 million artifacts, depicted here is an 1852 US three cent piece. Combining the suffix tri (for three) and dime, the coin was nicknamed the “trime”. Minted in Philadelphia and composed of 75% silver, 25% copper, it is the smallest silver coin produced in the United States and weighs just eight tenths of a gram.

This coin has survived in amazing condition when one considers it was recovered from a subsurface context in relative close proximity to an active stream channel. Excavated from Montgomery County prior to bridge replacement activities conducted by PennDoT, this “trime” is a welcome addition to the collection and represents just one of a dizzying array of sizes and unusual denominations that seem to be characteristic of 19th century American coinage.

For additional information on US coins see:
www.usmint.gov/
A Guide Book of United States Coins 2009 by R.S. Yeoman

For more information, visit PAarchaeology.state.pa.us or the Hall of Anthropology and Archaeology at The State Museum of Pennsylvania .
Posted by PA Archaeology at 3:41 PM