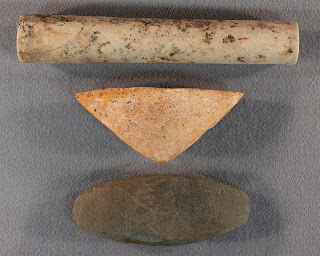 These stone artifacts, some with unusual incised decorations, were uncovered in a Native American cache (storage pit) by a contractor, who was "mining" topsoil along the North Branch of the Susquehanna River in Luzerne County. Artifacts in the image from top to bottom are 1) stone tubular pipe, 2) boatstone, which is a ground stone artifact whose name is derived from its boat-like shape and 3) bar celt or whetstone with incised lines on both surfaces. Celts were utilized by Native peoples for woodworking and whetstones were used for polishing and grinding other stone tools.
The contractor also noted dark stains in the soil and decided to contact a local professional archaeologist to further investigate. Mr. Al Pesotine of Pan Cultural Associates excavated the stains which yielded a storage pit utilized by Native peoples to store foods, similar to a cellar today. Carbonized wood recovered from the pit was radiocarbon dated to 570 +/- 50 B.C. (the Early Woodland Adena period). There are very few documented finds of the Adena Culture in the Upper Susquehanna Valley. The landowner kindly donated this unusual cache of artifacts to The State Museum of Pennsylvania in 1997.
For more information, visit PAarchaeology.state.pa.us or the Hall of Anthropology and Archaeology at The State Museum of Pennsylvania .
Posted by Trails of History at 3:59 PM