During the week of June 15, archaeologists from the State Museum of Pennsylvania and Temple University tested a prehistoric Native American site along the Lehigh River in Lehigh Gorge State Park, Carbon County. The site (designated 36Cr142 in the Pennsylvania Archaeological Site Survey files) was brought to our attention by local amateur archaeologists who were alarmed that it was being looted and valuable archaeological information was being lost.
It was reported that artifacts from the Transitional period (3000-4200 years ago) and the Late Archaic period (4200-6000 years ago) were the focus of the looters. The Transitional/Late Archaic period is a time of significant change throughout the Middle Atlantic region. Native American cultures were experiencing new technological developments, a dramatic increase in trade and the first widespread examples of ceremonialism. The hallmark of the Transitional period is the broadspear. The one pictured below is of the Perkiomen style and it was recovered less than 3 feet from the surface. The asymmetrical blade suggests it was also used as a knife. We felt it was important to learn more and document this site before it was completely destroyed. 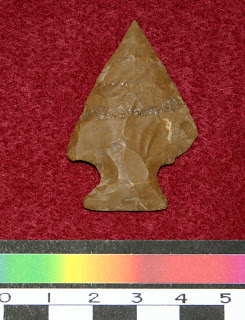 With the assistance of local volunteers, we conducted a week long investigation to determine the extent of the destruction and the potential for earlier occupations. In addition, as part of our visit, we were hoping to educate the local archaeological community as to the advantages of proper excavation techniques but also to make it clear that further looting would not be tolerated. The site is located on state property and it is protected under Section 511 of the State History Code. Collecting or digging for artifacts on state land is punishable by a $2500 fine and/or a year in jail.

Over a period of six days, we expanded two looters pits into an 8 X 14 foot unit and a 7 by 7 foot unit. The site is stratified although the top 3 -4 feet have been extensively dug-up by looters. The excavations proceeded by natural and cultural levels and all soils were screened through ¼ inch mesh. The work was hampered by rain storms but one unit was partially excavated to the bottom where a layer of cobbles representing the Ice Age stream bed were encountered. No artifacts were recovered from this depth and we assume this level dates to approximately 12,000 years ago.

This project only sampled a small portion of the site but we have been able to generate several working hypothesis. The site was occupied by at least six different Native American groups between 3000 and 9500 years ago and possibly earlier. We were able to develop a good description of the soil stratigraphy and the different occupations can be correlated with distinct soil strata. Although the Transitional/Late Archaic occupation has been adversely impacted, the Middle Archaic occupation, dating to between 6000 and 8500 is largely intact. Middle Archaic times are one of the most poorly understood periods in the region and this site has the potential to greatly increase our understanding of Native American culture during this time. The bifurcate based projectile point (of the LeCroy type) was found at over 4 feet below the surface. In addition, there were artifacts below the Middle Archaic occupation, probably dating to the Early Archaic or even the Paleoindian period and these would also be very significant. 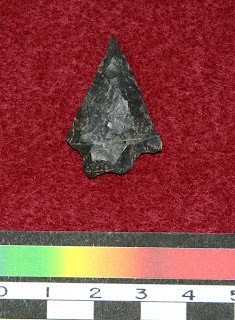 This site clearly has the potential to add new and significant data to our understanding of Native American cultural behavior in the past. Towards that goal, Temple University is planning to continue the investigation with a college field school planned for the summer of 2010.

For more information, visit PAarchaeology.state.pa.us or the Hall of Anthropology and Archaeology at The State Museum of Pennsylvania .
Posted by PA Archaeology at 3:38 PM