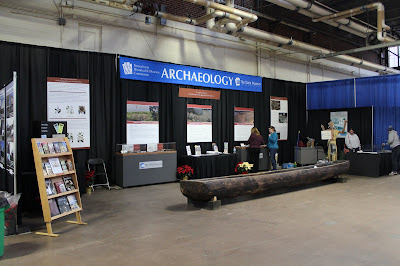 It’s January and the start of a new year for us at the State Museum of Pennsylvania and we are excited about all the great programs coming up this year. We start off every January with our trip to the largest indoor agricultural fair in the United States! Held each year right here in Harrisburg, Pennsylvania. This event draws hundreds of thousands of visitors and our booth is visited by about 40,000 of those visitors! That’s a lot of interest in archaeology and our cultural heritage.

Our exhibit theme this year is “Discovering the Susquehannock Indians”.  The focus is on tracing the cultural evolution of the Susquehannocks of central Pennsylvania covering the period from just before European Contact, (AD 1500), through the period of Conestoga Town (AD 1763). The exhibit features four large panels and two cases of artifacts which provide an overview of the transition from Native made goods to a reliance on European trade goods. One exhibit case contains a sample of pre-European Contact artifacts and the other contains a sample of Susquehannock artifacts from the Contact period obtained from Europeans. The panels and supporting artifacts, demonstrate a culture in transition and the impact of European influences on their lifeways.

European contact significantly impacted the Susquehannocks and other Indian groups living in the region. The introduction of diseases, conflict with other Indian tribes competing for the fur trade with the European, and the invasion of the land by the English, Dutch and Swedes on their territories greatly reduced the populations of Susquehannocks and the other Indian tribes.  Up until about 1660, the Susquehannock’s controlled trade with the Europeans. However, disease and competition with other Indians forced them to seek refuge with the English in the Chesapeake Bay area. By 1680, they returned to their former homeland but this time as refugees. Their native lifeways were replaced by European traditions. At the end of the French and Indian War, they were massacred by a group of vigilantes from the Harrisburg area. Their story is one shared by many Indian tribes along the east coast.

The artifacts selected for this exhibit offer tangible evidence of the changes described above. Early Susquehannock clay pottery, bone and stone tools, smoking pipes and bone ornaments are later supplemented or replaced by trade goods such as brass kettles, glass beads, kaolin smoking pipes and stylized Susquehannock pottery. This change includes a transition from a traditional long house to a log cabin type structure.  This is a fascinating story of change and adaptation by Indian groups who encountered Europeans and how they dealt with this cultural impact on their lifeways.

As in years past, the dugout canoe will be at the Farm Show for the children to sit in and imagine paddling down the rivers of Pennsylvania in prehistoric times. The dugout canoe is our WOW artifact and it draws a lot of interested folks to our booth.  It is a replica of a dugout canoe that is on exhibit at the museum. The original canoe was found in Luzerne County and has been preserved to insure its longevity. It radio carbon dates to about 800 years ago, well before European contact. Our replica is a 20 ft. long, white pine canoe that has navigated the Susquehanna River and Gifford Pinchot Lake. Sitting in this massive canoe and imagining yourself on a river or lake is a unique experience- not one that you can do every day.

Our booth includes an opportunity to grind corn using a pestle and stone mortar, much the same as Indians would have done. The process is popular with young and old alike and gives you a sense of the labor involved in making cornbread. The Susquehannocks were drawn to the lower Susquehanna valley not only for its location on the river and Chesapeake Bay, but also for the rich fertile soils that supported agriculture during the Late Woodland period.

Visitors often ask what we do when we aren’t out digging at Fort Hunter. Here is your opportunity to win a Behind the Scenes Tour of our lab. A one hour guided tour of the lab and gallery with a curator is a rare chance to see our research, observe the artifact processing labs and chat with our archaeologists. Be sure to enter your name for this drawing while visiting our Farm Show exhibit.  The American Archaeology s and Pennsylvania Heritage magazines are popular and free to our visitors along with the archaeology brochures developed over the years in connection with our research and exhibits. In addition, visitors can purchase a few of our publications- including Native Americans in Contemporary Pennsylvania by Troy Richardson, The Tutelo Spirit Adoption Ceremony by Frank Speck, and Folk Medicine of the Delaware and Related Algonkian Indians by Gladys Tantaquidgeon  - $2.00 each or three for $5.00.

Everyone loves the food court and the wonderful potato donuts, fresh cut fries, breaded mushrooms, maple syrup ice cream, beef sandwiches, chicken tenders, and the famous milk shakes. What the food court offers is a look at all of the great products our farmers grow in Pennsylvania. We are so fortunate to have a strong farming heritage and we need to support our farmers. The buy local initiative is important to their survival and farm land preservation provides countless benefits to the commonwealth.  This show offers visitors a tiny slice of the farming industry that employs nearly half a million people and contributes $185 billion to Pennsylvania’s economy every year.

We hope you’ve enjoyed this review of our Farm Show exhibit and that you will visit our booth located along the McClay street side of the Farm Show building. The period of interaction between the first Europeans and native peoples was a complex time of cultural change and an important period in the development of our Commonwealth. If you’d like to learn more about the Susquehannocks we encourage you to refer to the references below and visit the Anthropology and Archaeology gallery of The State Museum of Pennsylvania. Visitors to our museum can view some of the spectacular trade objects referenced in this blog and gain a sense of the importance of preserving our past for the future.


2001    The Lenape-Delaware Heritage: 10,000 BC to AD 2000. Lenape Books
For more information, visit PAarchaeology.state.pa.us or the Hall of Anthropology and Archaeology at The State Museum of Pennsylvania .
Posted by PA Archaeology at 4:20 PM