The Section of Archaeology has highlighted the excavations at Fort Hunter on many occasions, but Fort Hunter was only one link in a chain of French and Indian War-era blockhouses, forts, and stockades located along the frontier of Pennsylvania. Another one of these forts was Fort Halifax, located approximately 18 miles north of downtown Harrisburg along the Susquehanna River. Along with Fort Hunter, Fort Halifax served as a stopping point and supply depot for Fort Augusta, located in Sunbury another 35 miles upriver. Excavations and searches for evidence of Fort Halifax over the last few years have led to a better understanding of its role in the defense of Pennsylvania’s frontiers during the war.

The land upon which Fort Halifax would be built was settled in the early 1750s by Irish immigrant brothers Robert and Alexander Armstrong. The Armstrong’s warranted 100 acres of land at the mouth of a small run that would come to be known as Armstrong’s Creek and here they set up a farm and saw mill. Robert and Alexander were among the first residents of this area and no roads yet existed to their farm; instead the river provided the main means of transportation.

In October of 1755, the massacre of settlers at Penns Creek on the west bank of the Susquehanna River, just below what is now Selinsgrove, sent the inhabitants of the frontier rushing back to Lancaster, Philadelphia, Carlisle, and other “civilized” parts of Pennsylvania. Locally, residents of Paxton Township began construction of a fortified structure at Hunter’s Mill, later to be known as Fort Hunter, and John Harris stockaded and strengthened his house at Harris’s Ferry in anticipation of trouble with the Indians. Continued attacks in the winter and spring of 1756 led the government to approve the construction of a line of forts and stockades running from the Pocono Mountains southwest toward Pittsburgh along the frontier.

In addition, a large fortification was to be constructed at Shamokin to provide an extra defense of the Susquehanna River and calm the fears of the local Indians who had traditionally been allies of the English. In April of 1756, Colonel William Clapham was ordered to assemble local men and supplies for the trip to Shamokin to begin working on Fort Augusta. In June, they marched north and searched for a mid-way point to place a secondary fortification. Arriving at Armstrong’s they quickly set about erecting a square log fort nearby with walls approximately 160 feet long and corner bastions. Clapham decided this location was,

“the most convenient Place on the River between Harris’s and Shamokin for a Magazine on account of its good natural Situation, its Situation above the Juniata Falls the vast Plenty of Pine Timber at Hand its nearness to Shamokin and a Saw [mill] within a Quarter of a Mile (Hunter 1960).” 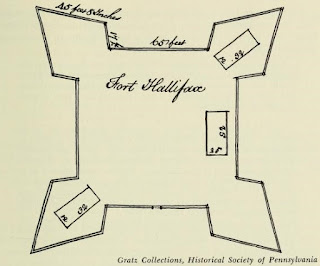 Clapham and most of the regiment continued on to Shamokin leaving Captain Nathaniel Miles and 30 men to complete barracks, a storehouse, and shooting platforms in the bastions. The fort was named by the Governor in honor of the Earl of Halifax. For the next year, the fort was garrisoned by approximately 30 men and served as a supply depot for the movement of food, equipment, and other supplies to Fort Augusta. However, in the fall of 1757, Fort Halifax was deemed to be obsolete and it was abandoned in favor of Fort Hunter.

Although it was only used for a short period of time, Fort Halifax would have had many people passing through on military business and thus has the opportunity for important information to be recovered from this site. The exact location of the fort has been sought for years with little luck. Several archaeological investigations have been conducted to locate the fortifications and determine the construction methods as well as to identify archaeological evidence of the soldier’s daily lives. Investigations were conducted from 2011 through 2013 by PennDOT, metal detecting in 2015, and additional fieldwork was performed for a master’s thesis. Investigative measures included surface collection, ground penetrating radar (GPR), excavation, mechanical stripping, metal detecting, archival research, and geomorphology. Although these were all unsuccessful in locating the physical remains of the fort, many artifacts were recovered that point to the site of the fort being close by.

A variety of gunflints and musket balls of various sizes were found, indicating the possibility of military activity in the vicinity.  Lead musket balls were used in muskets, a smoothbore gun popular in the eighteenth century, and came in different sizes. The musket balls in the photo below are .72 cal., .61 cal., .53 cal., and .39 cal. as well as two lead sprue or disfigured balls that may have been fired. In addition, a square grey, English gunflint was recovered. 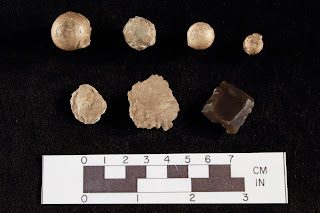 Clothing fasteners such as buttons and buckles were also recovered from these excavations. The men garrisoning this fort would likely not have been issued British uniforms, instead wearing a jacket or linen smock (long overshirt), breeches or trousers, a waistcoat, shirt, leather shoes, stock or cravat at the neck, and a hat – clothes they would have had at home. These items of clothing generally fastened with or were decorated with buckles and buttons of various materials such as brass, wood, bone, and pewter. 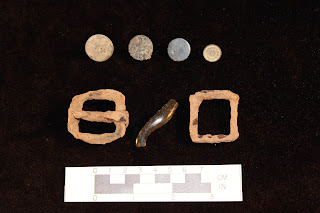 The men would have been fed with supplies provided by the Colonial government, usually consisting of fresh or dried meat, Indian corn, bread or biscuits, and a daily ration of rum. Tableware was not standardized and would have consisted of whatever was available, possibly some of it brought along with the soldiers. Many types of ceramics that would have been common at the time were found at Fort Halifax. 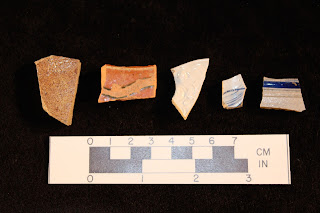 The soldiers would also have carried personal items with them to the fort, including things like combs, mirrors, pocket watches, coins, rings and jewelry, smoking pipes, and musical instruments. Two personal items that were recovered from the Fort Halifax excavations included pieces of a kaolin clay smoking pipe and a Jew’s or mouth harp. Clay smoking pipes were very common and were easily breakable and so are found on virtually all sites of this time period.  The brass Jew’s harp was a small musical instrument, played by placing it to the lips and “plucking” the metal tongue (missing on this example). 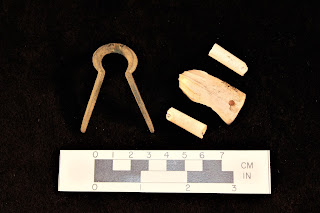 These are just some of the artifacts recovered from the excavations at Fort Halifax. And although the physical fort has not yet been found, artifacts recovered from investigations of the area indicate that archaeologists are likely in the close vicinity of the former structure. The collection, although small, is important for its research potential. Artifacts are similar to those in collections from other forts, such as Fort Hunter, and add to the collective information on Pennsylvania forts of the French and Indian War period. Continuing research into the location of the fort and study of its artifact collections should help in its eventual discovery and add to the overall knowledge of Pennsylvania fort sites.

Egle, William
1853    Pennsylvania Archives, Selected and Arranged from Original Documents in the Office
of the Secretary of Commerce, Conformably to the Acts of the General Assembly, February 15, 1851 & March 1, 1852., Volume II. Joseph Severns & Co, Philadelphia.


For more information, visit PAarchaeology.state.pa.us or the Hall of Anthropology and Archaeology at The State Museum of Pennsylvania .
Posted by PA Archaeology at 2:51 PM