Meet The State Museum Archaeologists at Kipona, Fort Hunter, and the 2017 Annual Workshops

This Labor Day weekend, State Museum archaeologists and volunteers will be out in the community to answer questions about the archaeology of City Island, prehistoric Native American lifeways, and our mission as stewards of Pennsylvania’s past. You will have the opportunity to learn more about experimental archaeology too.  As in previous years, our booth is located on the west, back side of the Senators Stadium on City Island. Look for the Archaeology banner flag. 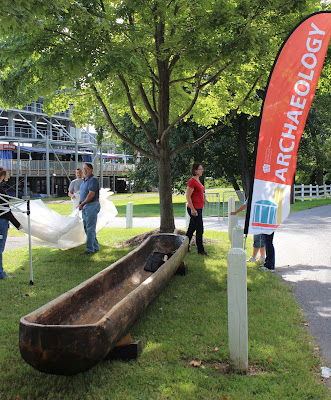 Setting up on City Island for the big event.

The exhibit will highlight the over 8,000-year-old archaeological record of Pennsylvania Indians visiting and living on City Island. You can also take a journey back in time by sitting in our 20-foot replica dugout canoe, and handle some of the woodworking stone tools, called adzes, we made and used to carve out the dugout. The design and function of our replica tools was loosely based on a cache of 4,000 year-old celt and axe blades, discovered during archaeological excavations on City Island in the 1990s. The cache will be on display along with other representative artifacts recovered from earlier investigations. 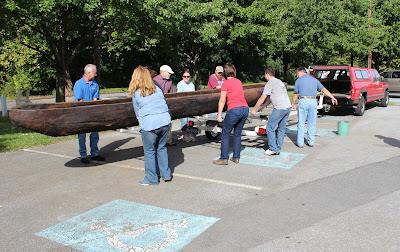 How many archaeologists does it take to move an 800 lb. dugout canoe? Answer- 8.

Come visit us and learn more about the long cultural history of City Island and experience the music and dance of contemporary Native American cultures at the Pow Wow. Don’t miss your chance to enjoy a beautiful day on the “kipona” or “sparkling water” of the Susquehanna river and be part of a century old Harrisburg city festival that dates back to September 4th, 1916.

The Museum is also open on Saturday, September 2nd (9-5pm) and Sunday (noon-5pm). Stop by our booth and take advantage of the free Planetarium tickets we will have on hand before your visit to the Museum. Shows run Saturdays on the hour from 11am to 2pm and at 1 and 2pm on Sundays. On-the-street parking is free Sundays in Harrisburg.

If you’re not able to venture out, you can also catch repeat showings of The State Museum’s Nature Lab and Learn at Lunch programming on PCN, today through Sunday. Archaeology focused show times are highlighted below.

Backyard visitors interested in seeing archaeologists in action at Fort Hunter Mansion & Park are welcome starting Monday, September 11th through Friday, October 6th. This field season we will continue to excavate the smokehouse builders’ trench and sample it’s interior, as well as follow higher density 18th century soil layers found in previous seasons in the mansion’s backyard.
Around the smokehouse, it is our goal to complete the builders’ trench excavation and further test the chemical composition of the soil inside the structure. It was observed last year that the interior soils were hydrophobic (water expelling or resistant) during and after rain storms. Rain water would drain, almost roll off the floor’s surface, rather than penetrate or absorb and moisten the soil. This was in stark contrast to the soil matrix on the rest of the site that showed the typical absorbent properties of a silt loam and remained wet for a long period when uncovered and exposed to the sun. One hypothesis is that dripping phospholipids released as rendered fats from smoking meats may have seeped into the dirt floor of the smokehouse and altered its chemical composition, making it water resistant. Another hypothesis may be that the sustained dry-heat used in the curing process was a primary factor that altered the soil. We sampled small portions of the hydrophobic floor surface last year and would like to increase our sample size this year to further test these competing or possibly complimentary hypotheses. 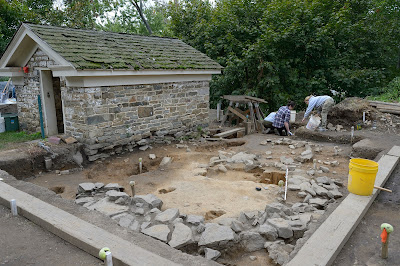 At the same time, we will continue to chase the elusive 18th century component behind the mansion in hopes to discover evidence of the French and Indian Period fort. This has been the primary focus of our initial research goals since Archaeology Month excavations began in 2006 at Fort Hunter. A 20 x 30’ block excavation will be opened behind the Mansion that will encompass a 2.5’ x 35’ trench excavation that was initially investigated in 2008. While this earlier investigative trench documented several modern disturbances of utility, sewer, and water lines running from the existing house through the backyard, there were several lenses of intact 18th century deposits we hope to further explore this year. 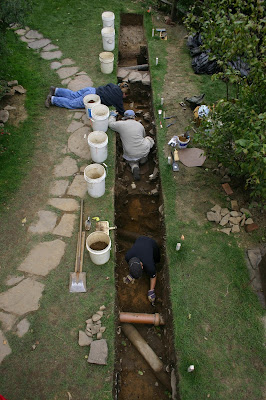 Overview of the 2008 trench excavation behind the mansion.

Outlined in red in the map below are areas we will focus on this year.  More intensely colored blue areas represent higher densities of datable 18th century artifacts recovered in previous year excavations. 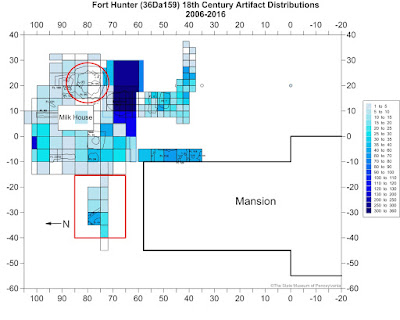 If you are unable to join us during the week, don’t forget the excavation is also open on Sunday, September 17th 10am-5pm as part of the Fort Hunter Day festival. It’s a family friendly event that also includes mansion tours, arts and craft booths, fair food and fun activities for all ages to enjoy.

For more information, download to print the Workshops flier and take advantage of early registration discounts for this year’s program with mail-in submissions on or before October 20th. Pre-registration fliers are also available at our upcoming events and walk-in registrants are welcome on the day. 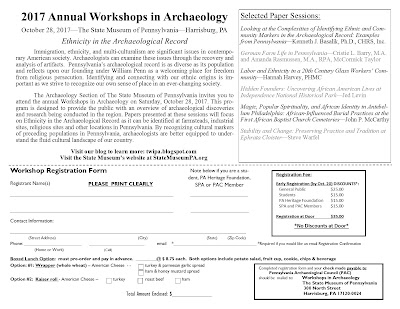 Please join us and celebrate our rich archaeological heritage this fall. The three day Kipona Festival and Pow Wow, our Archaeology Month investigation at Fort Hunter, and Workshops in Archaeology are fun and informative events where you can meet State Museum archaeologists and learn more about how we can all preserve our past for our future.

For more information, visit PAarchaeology.state.pa.us or the Hall of Anthropology and Archaeology at The State Museum of Pennsylvania .
Posted by PA Archaeology at 3:37 PM