A 2fer: Triangles and Archaeology


Triangular projectile points or arrow heads are associated with the Late Woodland period - dating from 900 AD to 1550 AD. Archaeologists have long recognized that there seems to be two different shapes or types of triangles in the Northeast. The slightly larger form was named the Levanna type by William Ritchie (1961). This type is approximately as wide as it is long, like an equilateral triangle, and usually with a concave base. According to Ritchie (1961) they average 3.1 cm to 4.5 cm in length; they are usually well flaked and date between 900 AD and 1350 AD. It is assumed they were used as arrow points. In Pennsylvania, this type is associated with Clemson Island and Owasco pottery types.

The second type, first described by Scully (1951), is the Madison type. It averages 2.5 cm long and is more commonly isosceles in shape or longer than wide. Although the two types clearly overlap in time, Madison triangles are generally thought to date after the Levanna type from 1300 AD to 1600 AD. In the Ohio Valley of Pennsylvania, these are sometimes referred to as Mississippian or Fort Ancient points and they are associate with the Monongahela culture. A sample of 50 Shenks Ferry triangular points from the Quarry site in Lancaster County (36La1100) dating to approximately 1500 AD, averaged 2.1 cm in length. Interestingly, a study conducted by Graybill et al. found that there was a reduction in the width of these points between early Shenks Ferry and late Shenks Ferry.


Although some archaeologists have argued that not all triangles could be pigeonholed into the Levanna or Madison type, it was believed that all triangular projectile points dated to the Late Woodland period and functioned as arrow points. However, in New England and New York, other types of triangular projectile point types have been found in Archaic contexts. The Beekman triangle is described by Ritchie (1971) as being associated with Late Archaic, Vosburg points in New York State dating to 4700 BP. He described these as equilateral in shape with excurvate or straight edges, and with moderate grinding of the base. On Martha’s Vineyard, Ritchie (1971) identified Squibnocket triangles in Late Archaic contexts, dating to 4200 BP. These were shaped like equilateral or isosceles triangles but with no grinding on the base. Hunterbrook triangles (Wingerson and Wingerson 1976) were defined based on the Hunter Brook Rockshelter along the Hudson River as equilateral in shape with excurvate edges and a ground and thinned base. However, Archaic triangles were rare and limited to New York and New England. For some archaeologists, there was a lingering question as to whether these were really Archaic in age or were they Late Woodland points that had washed into Archaic strata.

Beginning in the 1990’s, the chronological interpretation of these points began to change with the excavation of a large number of triangles from stratified Archaic sites at the Abbott Farm Complex along the Delaware River in New Jersey. This was unequivocal evidence that triangular points were being made and used during the Archaic period.  The radiocarbon dates from the Area D site (28Me1-D) at Abbott Farm extended the age of these points back to 6500 BP. Since that time, a number of other sites in Pennsylvania, such as Memorial Park (36Cn164), West Water Street (36Cn175), East Bank (36Nb16), Mifflinville (36Co17), Raker (36Nb58), P-11(36Pe60) and the Wallis site (36Pe16) have produced dates on Beekman or Hunterbrook triangles ranging from 6500 BP to 3600 BP.
There has been an effort to physically distinguish Archaic triangles from later Woodland triangles at the Abbott Farm Complex. Stewart (1998) states that a “healthy percentage” of Archaic triangles can be distinguished from Late Woodland triangles by “1) a patterned approach to the pressure flaking of bases, and 2) the asymmetrical aspect of the basal edge angle.” In addition, they exhibit “finer workmanship, symmetry and thinness than later types” (Wall et al. 1996: 10). Katz (2000) on the other hand, presents data that suggest that Archaic through Early Woodland triangles are difficult to distinguish from Late Woodland triangles.
There is one final lingering question. How were Archaic triangles used? Archaic triangles are indistinguishable from Late Woodland triangles so, logically, we might conclude that they also functioned as arrow points.
Triangular points such as the Madison and Levanna types are practically synonymous with the Late Woodland period, the introduction of the bow and arrow, well-made pottery, the introduction of farming; and village life. The received wisdom is that Indian populations were increasing; they began growing corn to feed the additional people; the bow and arrow was a more efficient for hunting compared to the atlatl; and it was also a more effective weapon in warfare. However, it is now clear that this scenario is rather simplistic and the appearance of the bow and arrow occurred much earlier.

In the smokehouse block, several suspected features from last year were more easily defined. These will be further investigated to better define the smokehouse structure and to determine if this was also the site of an earlier smokehouse. Towards the end of this season, the smokehouse foundation will be removed to recover artifacts that may more exactly determine the date of this structure.
We had a very interesting interview with Marcus Schneck of Pennlive that will be aired the week of September 18th. 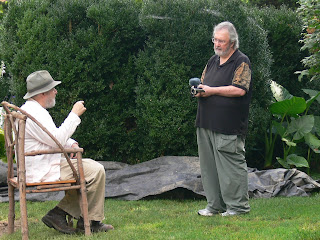 Marcus Schneck Interview
This is going to be an exciting excavation season, so please join us. The site is open to the public from 9:00 am to 4:00 pm weekdays, weather permitting. Friday the 15th  (TONIGHT), we are celebrating 3rd in the Burg so the site will be opened until 6:00 pm.  This coming Sunday, September 17th is Fort Hunter Day and we will be open for public visitation and will be excavating from 10:00 am until 5:00 pm.
We hope to see you there!
References
Custer, Jay F.
2001    Classification Guide for Arrowheads and Spearpoints of Eastern Pennsylvania and the Central Middle Atlantic, Pennsylvania Historical and Museum Commission, Harrisburg.
Graybill, Jeffrey R., James T. Herbstritt, Andrea J. Carr and Melanie R.Wing
2014    Shenks Ferry Triangles, Seriation and Dating. Pennsylvania Archaeologist 84(2): 36-41.
Katz, Gregory
2000    Archaic Period Triangular Projectile Points in the Middle Atlantic Region. Paper
presented at the 65th Annual Meeting of the Society for American Archaeology,
Philadelphia.
Ritchie, William A
1961    A Typology and Nomenclature for New York Projectile Points. New York State Museum
Science Service, Bulletin No. 384, .
1971    A Typology and Nomenclature for New York Projectile Points. New York State Museum and Science Service Bulletin No. 384. Albany, New York.
Scully, Edward
1951    Some Central Mississippi Valley Projectile Point Types. Museum of Anthropology, University of Michigan
Stewart, R. Michael
1998    Archaic Triangles at the Abbott Farm National Landmark: Typological Implications
For Prehistoric Studies in the Middle Atlantic Region. Paper accompanying an
exhibit of Archaic-Age Bifaces at the Annual Meeting of the Middle Atlantic
Archaeological Conference, Cape May, New Jersey. Sponsored by the Archaeological
Society of New Jersey and the New Jersey Department of Transportation.
Wall, Robert D., R. Michael Stewart, and John Cavallo
1996    The Lithic Technology of the Trenton Complex. Trenton Complex Archaeology: Report 13. Prepared for the Federal Highway Administration and the New Jersey Department of Transportation by the Cultural Resource Group, Louis Berger & Associates, Inc., East Orange, New Jersey.
Wingerson, Roberta and Richard Wingerson
1976    The Hunter Brook Rockshelter.  Bulletin of the New York State Archaeological Association 68:19-28.


For more information, visit PAarchaeology.state.pa.us or the Hall of Anthropology and Archaeology at The State Museum of Pennsylvania .
Posted by PA Archaeology at 3:24 PM