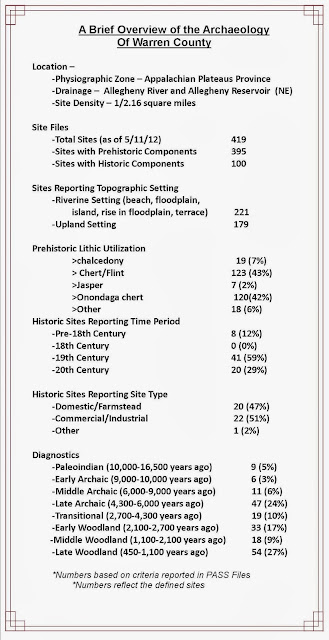 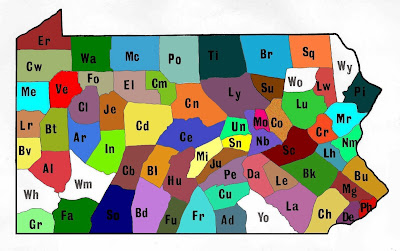 This week’s journey by county through the archaeology of Pennsylvania takes us to northwestern Pennsylvania and Warren County. This county is situated in the High Plateau section and the Northwestern Glaciated section of the Appalachian Plateaus Physiographic Province. The region is characterized by rolling uplands and steep valleys. The northwestern half of the county was glaciated and exhibits glacial features such as terminal moraines, kettle lakes, swamps and kame terraces. The Allegheny River cuts through the middle of the county and the major tributaries are Brokenstraw Creek and Conewango Creek.

Warren County was first occupied by Europeans in the 1740s. Initially, the French claimed the region and documented their claim with a series of lead plates buried in the ground that stretched from the City of Warren down the Mississippi Valley. After the French and Indian War, the British took over and finally the Americans incorporated the land into the Commonwealth of Pennsylvania. Early on, the major industry was lumber but the discovery of oil in the 1870’s replaced the logging industry. Residents of the county prospered in the 19th century but by the middle of the 20th century the economy was on the decline. A large section of Warren County is in the Allegheny National Forest and is reserved for recreation, lumbering and the gas industry.

The density of sites (at 1 site per 1.97 square miles) is relatively high especially compared to other counties in the northern part of the Commonwealth. There are concentrations of prehistoric sites along the Allegheny River, at the mouth of the Brokenstraw for example, but numerous sites have also been recorded in the uplands. Many of these are rockshelters and 28% of all sites in the county fit this category. Allegheny National Forest has their own crew of archaeologists and while conducting surveys in preparation for logging and gas projects, they have recorded many of these sites.

The most commonly used lithic material by prehistoric peoples in making stone tools is chert (43%) and 42% of the sites reporting lithic material specify Onondaga chert. The Onondaga formation is located in a band extending from Ontario across New York State approximately 100 miles (160 km) to the north. This is a high quality and distinctive lithic type that was used throughout prehistory. It is assumed that Native Americans directly procured this chert from bedrock sources but there is also ample evidence that they used pebbles and cobbles that were washed into the region by rivers or pushed into the region by the glaciers.

Although the Allegheny National Forest archaeologists have conducted the most extensive surveys in the county, there have been several other major surveys. The regional archaeological survey program which was conducted between 1979 and 1981 included Warren County and documented many new sites but was especially productive in updating information on existing sites. For example the complex of sites known as the Buckaloons was proposed as a National Register Historic District but has yet to be nominated. This track of land contains several sites at the mouth of the Brokenstraw Creek that include occupations from small Paleoindian camps to Late Prehistoric villages and several Hopewell mounds. 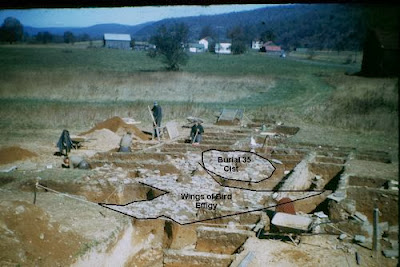 Warren County contains at least eight burial mounds dating to the Middle Woodland period and several of these were tested in 1941 by the Pennsylvania Historical Commission under the direction of Edmund S. Carpenter and Wesley Bliss. This was part of the Civilian Conservation Corps (CCC) investigation of mound and village sites in northwestern Pennsylvania. Interestingly, the excavation of the Sugar Run Mound was conducted by a crew of Seneca Indians from the Allegheny Reservation. The Sugar Run Mound site (36Wa359) contained three mounds that slightly overlapped each other. Although these had been plowed down to almost level with the current ground surface, it was possible to determine the construction sequence of the three. There were at least three stone lined crypts, each surrounded by a cobble pavement. It is believed that the cobbles under Mound Unit #1 were arranged in the shape of a raptorial bird on one side of the stone lined crypt and in the shape of a celt on the other side. 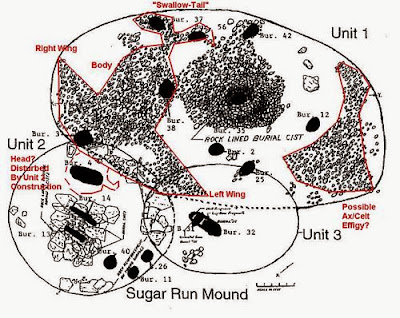 According to McConaughy and Johnson (2003:114), the three mounds are separated by relatively short time intervals. Based on the low frequency of exotic trade artifacts and the radiocarbon date of AD 250 (uncorrected) Mound Unit #1 was the first to be constructed but this was prior to the local population becoming involved in the Hopewell Interaction Sphere trade network. Mounds #2 and #3 contained numerous exotic trade artifacts such as mica, galena, marine shell, copper and Flint Ridge chalcedony, indicating these mounds date later in time when the local population was actively involved in the Hopewell Interaction Sphere.

According to McConaughy and Johnson (2003:114, Sugar Run Mound is part of the Squawkie Hill phase, a local manifestation of Hopewell. This is found at several mounds in northwestern Pennsylvania notably Nelson (36Cw58), Irvine (36Wa251-255), Cornplanter (36Wa242) and Corydon (36Wa1).

Finally, Warren County is the location of the last Indian controlled track of land in Pennsylvania. This was known as the Cornplanter Grant. Cornplanter was a Seneca chief who fought against the United State during the Revolutionary War. However, after the war, he encouraged peace with the United States. 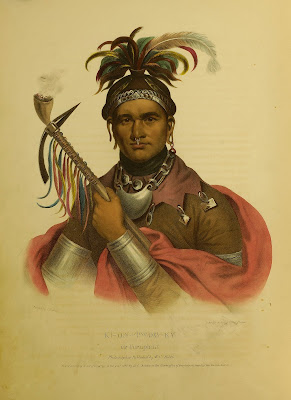 According to Wallace (1999:167), he was instrumental in keeping the Iroquois out of the Miami confederacy which defeated two American armies but was eventually routed by Anthony Wayne at the Battle of Fallen Timbers in 1794. In response to his peace keeping efforts, Pennsylvania awarded Cornplanter and his heirs “in perpetuity” 600 acres of land in the Upper Allegheny Valley just south of the New York state border. This included his town of Jenuchshadego. Initially, Cornplanter “brought in Quaker teachers, established schools, made roads, built good houses, encouraged agriculture, bred large herds of cattle and, in a word, turned the Cornplanter Grant into a model community” (Wallace 1999:168). Unfortunately, at the end of his life, he rejected all of this becoming disillusioned with his non-Indian neighbors. He died in 1836.

The Cornplanter Grant was occupied by his descendents and other Indians until 1964, when the remaining residents were relocated upriver in preparation for the construction of the Kinzua Dam. Cornplanter’s cemetery was archaeologically excavated (Abrams 1965 and Sublett 1965) and, along with his monument also re-located. Remembering the words of the original land grant issued by the Commonwealth “in perpetuity”, the dam project was strongly opposed by Native Americans; however, the land was flooded in 1967. This signaled the beginning of a revitalization of Native American culture in America; an event that was instrumental in the formation of the American Indian Movement. The flooding also covered numerous archaeological sites including the Sugar Run mound discussed above.

We hope you have found this journey through the archaeological heritage of Warren County interesting, and that you will seek additional reading in the references provided below.  Understanding and exploring our archaeological heritage is crucial to our understanding of human behavior and our ability to change and adapt over time - just as the peoples of Warren County have done for thousands of years.

Wallace, Paul A.W.
1999    Indians in . Anthropological Series Number 5. Historical and Museum Commission, .
For more information, visit PAarchaeology.state.pa.us or the Hall of Anthropology and Archaeology at The State Museum of Pennsylvania .
Posted by PA Archaeology at 5:10 PM