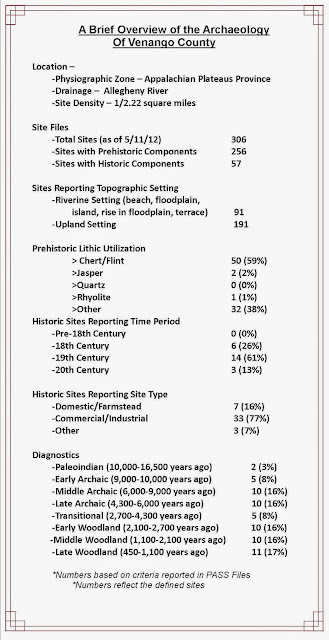 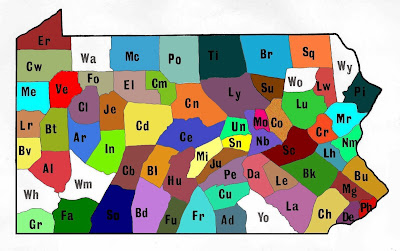 We return this week to our county by county journey through Pennsylvania’s archaeological heritage with a stop in the northwestern corner of the state, Venango County.  Situated in the glaciated Appalachian Plateaus Province this physiographic zone contains some of the highest elevations in Pennsylvania. Today the primary drainage is the Allegheny River, but during Pleistocene glaciations most of the streams and rivers drained northward into Lake Erie and then into the Atlantic Ocean via the St. Lawrence Seaway. Ice dams which formed during the Pleistocene reversed the direction of the major drainages forcing the directional flow south into the Allegheny River,  and the Ohio River drainage basin.  Glacial till contains gravels of Onondaga chert cobbles, transported from the quarries of western New York.

The primary lithic material used for stone tool production in Venango County is chert and there are several local sources in addition to the high quality Onondaga material. Northwestern Pennsylvania typically receives major snow fall from the west and cold air masses out of Canada insure temperatures to retain snow cover for an average of 60 days per year. Forests of oak, maple, pine and hickory provided prehistoric peoples with food sources from nuts and seeds to the fauna that inhabited these woods. 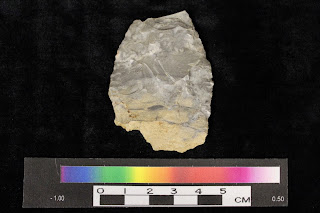 biface fashioned from Onondaga chert from the Polk #4 Site (36Ve282)

Four prehistoric settlement types have been defined for Venango County; rock shelters, riverine, upland and special purpose sites.  The majority of sites recorded in the Pennsylvania Archaeological Site Survey (PASS) files are located in upland settings.  Two sites previously reported on in riverine settings provide important architectural information for Venago County. Three house types were identified by Sue Ann Curtis at sites 36Ve3 and 36Ve50.  Type I is defined as a single circular to oval row of posts that encloses an area from 8 to 12 feet in diameter. Type II is a circular or oval structure with an attached oval storage compartment, typically 8 to 12 feet in diameter but as large as 15 to 20 feet. These oval compartments are often associated with food storage.  The third house type is also circular, 8 to 12 feet in diameter, but has an inner row of post molds- essentially a double wall around all of part of a wall. It is posited that this second row may have been post supports for a bench which lined the walls of these structures.

Curtis identified eleven houses at 36Ve50 and two at 36Ve3 and suggested that as many as 20 houses may be present at each of these sites based on artifact concentrations and additional post molds.  Curtis suggests that these camps are central base or transient camps based on the presence of residential structures, ceramics, projectile points and stone tools such as grinding stones, net sinkers, choppers, drills and scrapers. Pottery is described either grit or quartz tempered with shell tempered pottery present at rock shelter sites.  Rock shelters were used seasonally as defined by faunal remains of turtle, frog, migratory birds and mussel shells. We would be remiss in not mentioning at this time the Rainbow Rocks Petroglyphs site.  Examined and reported on by James Swauger of the Carnegie Museum, Rainbow Rocks Petroglyphs are carved on the north wall of a rockshelter opening, part of the Pottsville sandstone formation. These pecked and rubbed images illustrate snake figures, bird tracks and a single human figure. Swauger who made extensive surveys of the Ohio River Valley petroglyph formations, notes that the human figure at Rainbow Rock is a stick figure, an unusual form as others are generally full bodied in the Upper Ohio Valley. The snake and bird figures are common elements on petroglyphs located across the Commonwealth, including the lower Susquehanna River. 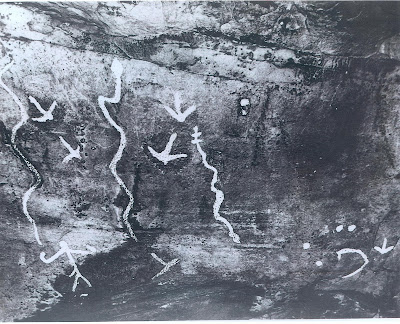 These petroglyph sites are considered specialized use sites as are a series of oil pits identified and recorded in Curtis’s survey of Venango County.  Two to three thousand oil pits have been dug along terraces in the Oil Creek Valley.  These pits were present when the region was explored in the 18th century, and evidence indicates Native peoples were using them during the Middle Woodland Period (1,100 – 2,100 years ago). Foot paths used by these native groups were identified by Wallace and include the Cornplanter-Venango Path, Frankstown-Venango Path and the Venango Path.  It seems likely that the presence of oil near these foot paths played a role in their importance in Native trade to the west and north.

Many of these oil pits were destroyed during the 19th century, but some 250 are now protected from development. These pits vary  in shape from circular, oval  to rectangular; between 6 and 35 feet in length, 2-5 feet deep and enclosed by a ridge of fill some 2-4 ft high.  Excavations indicate that pits were dug to a depth of six to seven feet to the petroleum based gravel- type sands.  Log structures discovered in two of the pits revealed a crib-like construction related to this oil recovery activity.  Oil extraction would go on to play a larger role in the 19th century as the demand for oil increased and the industrial revolution emerged 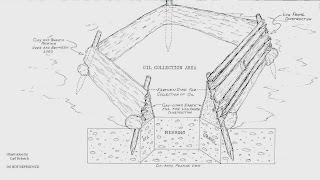 The Venango Path was not only important for native peoples, but was also an important military highway during the French & Indian War. The French construction of a portage road from Presque Isle Bay on Lake Erie, south to Waterford and Fort LeBoeuf allowed for the transport of materials to French Creek and eventually the Allegheny River. This route was important for the French who controlled the Louisiana Territory and who needed to maintain this path from Canada to Louisiana. The French fort constructed here in 1756, Fort Machault, was located at Franklin, at the junction of French Creek and the Allegheny River.  The British defeated the French and built their fort at this location in 1760.  It was subsequently destroyed during the Pontiac War in 1763.  The Treaty of Fort Stanwix in 1784 allowed for the settlement of these lands and designated the area as “Donation Lands”.  Donation lands were set aside by the commonwealth for donation to Pennsylvania veterans of the Revolutionary War as payment for service.

In August of 1859 the first oil well was drilled on land owned by Edwin L. Drake, an event that would significantly impact the area.  By 1862 three million barrels of oil were reportedly produced and the rush to “get rich” drew thousands to the area.  Boom towns which had sprang up overnight, Boom Towns, only to become abandoned waste land.  Pit Hole was one such town. Established in 1865, its population soared to 20,000 in a few months’ hotels and businesses would cover the town.  Plagued by fires that occurred on an almost weekly basis and the discovery of more productive wells a few miles away, the population dropped to just 287 by 1870. Three families remained in 1877 when the borough charter was annulled.  Today the Drake Well Museum and associate groups help to maintain and operate a visitor center at the site of Pit Hole. 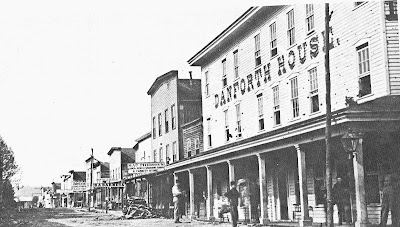 Archaeological investigations continue to explore the heritage of this region and the effort of recording many of these sites goes to the Venango Chapter #30 of the Society for Pennsylvania Archaeology.  Chapter members have recorded a half- dozen sites and updated information on others, much of this done by chapter member Bill Black.  This chapter is very active at the local level and often presents at the annual meetings of the Society for Pennsylvania Archaeology.  Their interest in preservation and archaeological heritage are to be commended. 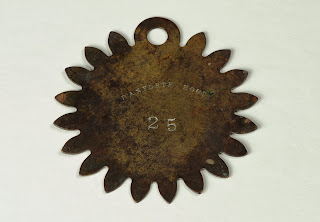 key fob for the Danforth House

We hope you will take some time to read about the archaeological heritage of your community and take the time to record archaeological sites that you may know about.  Remember this is your heritage and it is our duty as citizens to strive to preserve the past for the future.  Join us next week as we explore Warren County on the border with New York state and just north of Venango.

Darrah, William C.
Pithole, the Vanished City; A Story of the Early Days of the Petroleum Industry. 1972

For more information, visit PAarchaeology.state.pa.us or the Hall of Anthropology and Archaeology at The State Museum of Pennsylvania .
Posted by PA Archaeology at 4:08 PM