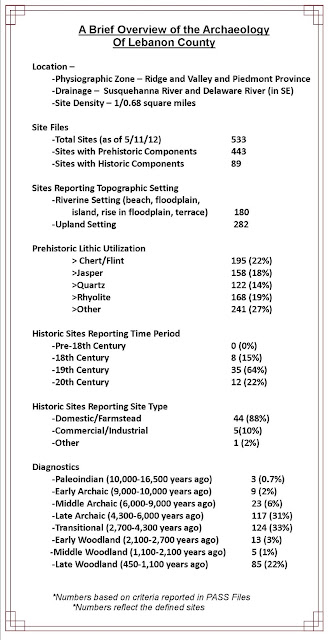 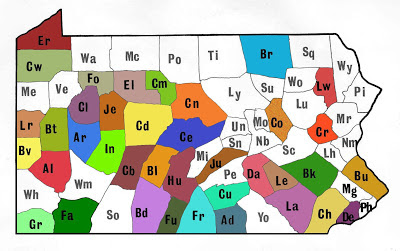 This week our journey by county through the archaeology of Pennsylvania takes us to southeastern Pennsylvania and Lebanon County.  Although it does not boast extremely large numbers of sites such as Washington, Lancaster or Westmoreland counties, at one site per 0.68 square miles (based on the Pennsylvania Archaeological Site Survey (PASS) files), it is ranked third in the state for site density.  It is mainly situated in the Piedmont physiographic province, but the northern edge includes the Great Valley and the Ridge and Valley zones. The Swatara Creek is the main drainage which eventually empties into the Susquehanna River. The Piedmont landscape is generally a rolling terrain with many small streams.  This is reflected in site locations with only 39% of the sites in riverine settings. Lithic resource preferences are typical for the Piedmont zone, consisting of chert, metarhyolite, jasper, quartz and quartzite in descending order. Prehistoric sites recorded account for 83% of the sites, compared to historic sites at just 16%.  The rural nature of the county is reflected in the fact that the majority of the historic sites recorded are characterized as domestic/farmsteads (88%). The prevalence of farming in Lebanon County has also contributed to the high rate of discovery and recordation of sites. The willingness and diligence of key individuals to record these sites with the PASS files is also an important factor. 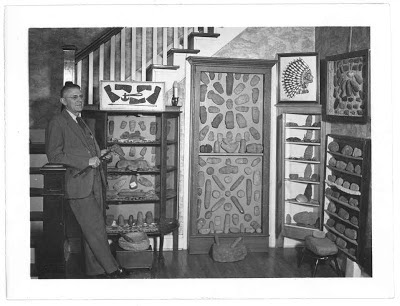 Although the county contains a high density of prehistoric sites, few have been systematically excavated. Nevertheless, the State Museum curates artifacts from this county representing well over 100 recorded archaeological sites through the efforts of avocational archaeologists. Jan and Warren Wise recorded a large number of sites from the eastern side of the county, but the majority were recorded and surface collected by Samuel S. Farver.  This collection of sites and the associated artifacts is a representative sample of prehistoric materials from the region. This collection has been utilized in research of projectile point typologies, but its research potential is limitless. One possible project could be to characterize sites from all time periods by lithic material and topographic setting in both the Great Valley and the Piedmont physiographic zones.  We encourage any students who are interested in an internship or a senior thesis to contact us via The State Museum to discuss this or additional research projects further. 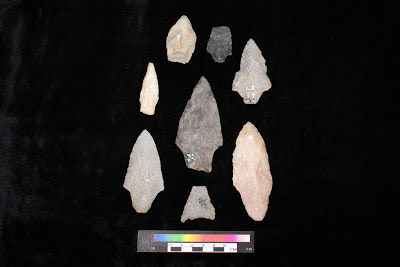 One of these curated sites is the Wilheim site (36Le94). A multi-component site situated on the edge of the Great Valley on a slightly elevated colluvial terrace at the base of Blue Mountain.  The collection is dominated by quartzite debitage and projectile points. Based on diagnostic projectile points, it dates to the Late Archaic (based on Bare Island, Poplar Island and Lackawaxen points), Transitional (Koens-Crispin and Snook Kill), and Early Woodland (Fox Creek) periods. However, the Wilheim site is best known for its Paleoindian occupation. In the 1940’s and 50’s Sam Farver was working with John Witthoft investigating the Shoop site in nearby Dauphin County. Primarily based on Farver’s intensive surface collection at the site, Witthoft (1952) published a detailed report.  In this report, Witthoft also referenced the Wilheim site (recorded by Farver) and speculated that the two sites were related. The Shoop site produced over 6000 artifacts including 92 fluted points, over 500 endscrapers and hundreds of other Paleoindian flake tools. The lithic material is Onondaga chert, the source of which is located 250 miles to the northwest in western New York. The Wilheim site is much smaller, producing three fluted points, one endscraper and a small collection of flake tools, mostly in jasper from less than 100 miles away. Witthoft (1952) argued that Shoop was a major hunting camp occupied by a large band of Paleoindians. The Wilheim site was used as the large band dispersed into family groups and moved. Witthoft argued that Shoop was pre-Clovis in age and represented a group that was slowly migrating south from the Bering Land Bridge. 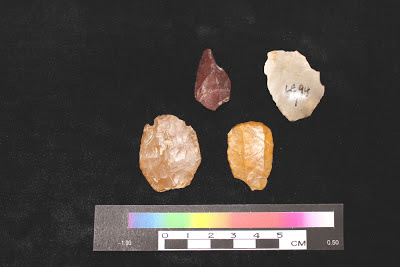 In a very detailed analysis of the quartzite industry in the region, Jay Custer (1992) analyzed nine artifact collections from Lebanon and Lancaster counties. His most detailed analysis involved material from the Long site (36Le4 and recorded by Samuel Farver). These sites produced large numbers of early broadspears (Lehigh/Koens-Crispin types) along with narrow stemmed projectile points. He was able to show that many of these sites represented the early stages of tool production and were probably close to a quartzite quarry. Others were a greater distance from the quarry and represented late stage reduction and the final stages of tool production. However, both the broadspears and the narrow stemmed points went through the same lithic reduction sequence. In both cases the goal was to produce large flat flakes that served as blanks for projectile points and other tools. Custer also argued that these two point types were contemporary with one another and part of the same tool kit. The narrow stemmed points functioned as projectile points and the broadspears functioned as projectile points but also as cutting and prying tools used in the butchering of animals. Finally, he examined lithic preferences and argued that beginning in the Late Archaic period, Native Americans preferred local lithics as long as the source material was large enough to produce broad flakes. Although quartzite is considered “tuff to work” it occurs in very large formations that allowed for the production of broadspears. 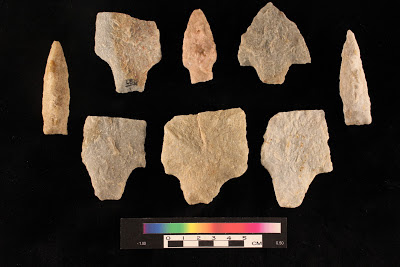 Farver assisted John Witthoft, former State Archaeologist, (Witthoft and Farver 1952) in the excavation and analysis of two Shenks Ferry sites in Lebanon County; the Miller site (36Le2) and the Elmer Summy site. The Shenks Ferry culture dates to the Late Woodland period between AD 1250 and AD 1525 and is defined by a series of distinctive pottery types. These were an agricultural people, initially living in hamlets and eventually moving into stockaded villages. The Summy site is located along the Swatara Creek approximately four acres in size and underlain with a hardpan that made a controlled excavation impossible. Witthoft had the field deep plowed and located features while following behind the plow. Farver is credited with doing most of the field work and was able to identify twenty-five shallow pit features but no postmolds or burials. The Miller site was also difficult to excavate. It produced fifteen hearths, seven burials but no shallow pits features. In terms of domesticated plant foods, Witthoft noted that Summy only produced beans and Miller only produced corn as evidence of this early agricultural activity. However, the pottery from both sites was similar and Witthoft assigned it to the Shenks Ferry Cordmarked and Shenks Ferry Incised types. Witthoft concludes that the Shenks Ferry culture does not seem to be related to earlier cultures in the lower Susquehanna Valley but may be related to “Piedmont Siouan” groups. According to Witthoft, they were “destroyed and absorbed by the Susquehannocks shortly after the earliest Europeans penetrated into the coastal area”.

The lithic resources and gentle landscape that appealed to prehistoric peoples also attracted colonial settlers to the county.  In 1742 Peter Grubb established the Cornwall Iron Furnace http://www.cornwallironfurnace.org/  which continued to operate as a charcoal cold blast furnace until 1883.  The furnace underwent extensive updates in the 1850’s and it is this 19th century furnace which visitors can view today.   Located in a National Historic Landmark District this site is an excellent example of preservation efforts by the Pennsylvania Historical and Museum Commission (PHMC) which accepted the donation of the property in 1932.  Through these preservation efforts this site serves as the best example of a 19th century iron furnace complex in America. 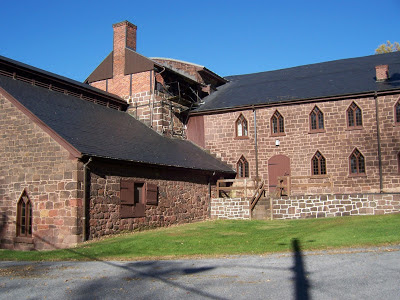 We hope you have enjoyed this glimpse into the archaeological heritage of Lebanon County. Hopefully it will inspire you to seek such publications as Susquehanna’s Indians, Prehistoric Cultures of Eastern Pennsylvania, or any of the numerous journal articles on archaeology conducted in Lebanon County and published in Pennsylvania Archaeologist.  Understanding and exploring our archaeological heritage is pivotal to our understanding of human behavior and our ability to change and adapt over time- just as the peoples of Lebanon County have done for thousands of years.

Bibliography
Custer, Jay
1992    Analysis of Late Archaic Quartzite Industries from the Long Site and Other Sites of the Middle Atlantic Piedmont. Pennsylvania Archaeologist 62(1): 12-47.


For more information, visit PAarchaeology.state.pa.us or the Hall of Anthropology and Archaeology at The State Museum of Pennsylvania .
Posted by PA Archaeology at 3:07 PM