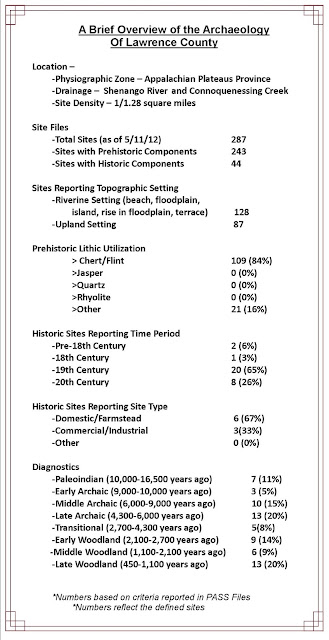 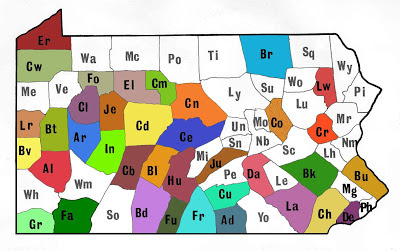 Lawrence County is located in the extreme northwestern part of Pennsylvania and is part of the Appalachian Plateaus physiographic province. It is one of five counties that border the state of Ohio, the others being Beaver, Mercer, Crawford and Erie. Lawrence County was formed on March 20, 1849 from parts of Mercer and Beaver counties. Lawrence County has a total population of over 91,000 people living in an area of 363 square miles, all of which is drained by the Shenango, Beaver and Mahoning rivers, Slippery Rock and Connoquenessing creeks. Its name sake is taken from Commodore Perry’s warship,” Lawrence”.

New Castle is the county seat originally founded on a 50 acre plot of land at the confluence of the Shenango River and Neshannock Creek by John Carlysle , a civil engineer charged with resurveying the region in 1798 (Donehoo 1928). A number of Indian paths crisscrossed the county and some of these were chronicled as important multidirectional pathways as early as the 18th century (Wallace 1965). As a direct influence, the region became an important focal point for trading between Native and European traders. Principal Indian towns of Delaware and Seneca attribution included “The Kuskuskies” towns centered at the confluence of the Shenango and Mahoning rivers and at other locations near the mouth of the Neshannock. Heckewelder (Donehoo 1928) noted that the name Kuskuski was a corruption of Goshgoshing “the place of hogs”, assuming that the name derived from the native’s propagation of this animal as a primary food source.

Lawrence County is largely composed of  Mississippian and Pennsylvanian periods (360-290 million years in age) rocks consisting of sandstones, limestones, shales and coal seams that were formed from a low lying swamp. Some of these layers contain well preserved plant and animal fossils. Subsequently, millions of years later the region experienced massive glaciations that eventually retreated leaving the prehistoric landscape scoured and modified in many places. Many of the glacial features such as eskers, moraines, and kettles can still be observed throughout the county.
From an archaeological perspective Lawrence County has a long and complex record. The Pennsylvania Archaeological Site Survey files contain a total of 287 recorded archaeological sites or one site for every 1.28 square miles. Forty-four of these are historic period sites characterized by 18th, 19th and 20th century remains. Prehistoric sites are mainly situated in  riverine settings and 40% are found in upland settings . A variety of cherts represent the primary lithic material. These were obtained from local glacial moraines and number of prehistorically utilized quarries in northeast Ohio. 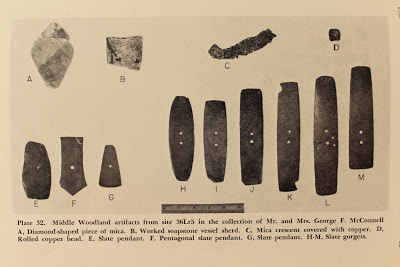 The entire continuum of Paleoindian through Historic Indian occupation has been identified for Lawrence County (Mayer-Oakes 1955). Sites dating to the Archaic and Late Woodland periods are the most common followed by Transitional, Early, Middle Woodland and Paleoindian periods. A remarkable cache of stone and copper artifacts is reported from a Middle Woodland mound on the Beaver River. The cache was comprised of banded slate gorgets, pendants, cut sheet mica, a copper bead and numerous projectile points. Among the latter at many sites in Lawrence County is a unique type called “Raccoon Notched” which is common to the Beaver drainage and many other regions. Raccoon Notched points are exquisitely made out of high quality chert and their principal identification attributes are the square side and/or corner notched base, overall thinness and pressure flaked surface. Bases are typically square to concave with a decided break or gradual curve near its distal end which gives the blade of the point a pentagonal or ovate shape. The Raccoon Notched tradition has been formally described by Stanley Lantz (1989).  These are very similar to the Jack’s Reef projectile point type of eastern Pennsylvania and New York. Both may represent arrow points rather than spear points. 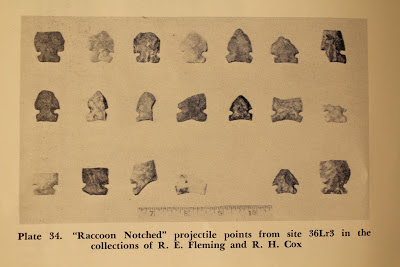 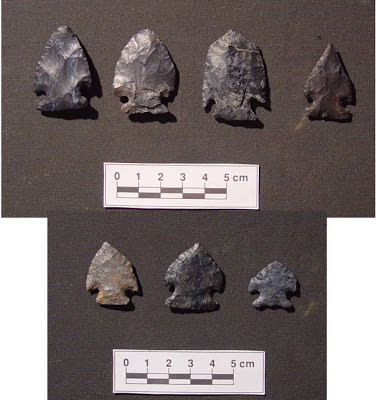 As we time travel through Lawrence County many Native American sites of the Late Woodland/Late Prehistoric period become evident. Among such sites are those found possessing a type of grit tempered cord-marked pottery called Mahoning ware (Mayer-Oakes 1955). One of these sites is  Coverts Crossing Site (36LR75), a multi-component  prehistoric site located along the Mahoning River floodplain near New Castle, Pennsylvania. Phase I,II and Phase III data recovery investigations were conducted there by GAI Consultants, Inc., between 1998 and 2000 as part of the Coverts Crossing Bridge Replacement Project (MacDonald 2000). 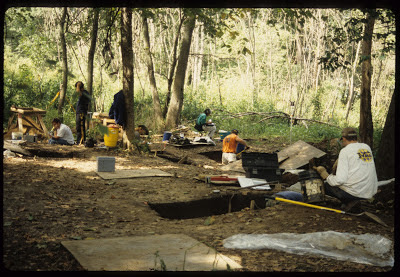 view of a site at the Coverts Crossing Bridge Replacement project

Two discrete soil deposits contained prehistoric artifacts: an uppermost cultural stratum associated with a Late Woodland occupation and a deeper Late Archaic occupation. Both occupations, though different in age, apparently functioned as short term camps that were revisited over several seasons. Although no postmold features, which often define house and other structural patterns at a site were identified at Coverts Crossing, there were a number of pit and hearth features in the two cultural bearing strata.

The uppermost deposit , or Late Woodland stratum, revealed hearths and food processing pits of Native Americans that date between 900 and 1200 years ago. Their contents, comprised of charred corn, berry seeds, nuts , animal bones and triangular stone points (used to harvest the animals). These dietary remains suggests that these people were foragers, hunters and farmers who utilized the campsite during the late summer through early autumn.They cooked or boiled some of their foods in a type of hand molded bag-shaped pottery container that archaeologists call Mahoning  Cordmarked (Mayer-Oakes 1955). 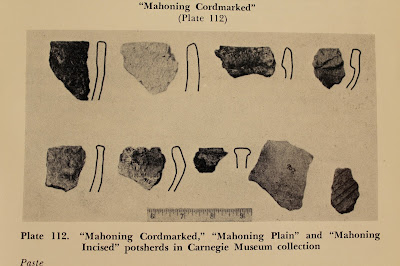 The deeper, or lower, Late Archaic stratum revealed hearths, roasting pits and a lithic scatter, the latter essentially consisting of discarded/lost stone flakes from the manufacture and re-sharpening of stone tools that the Late Archaic people used in everyday life. These cultural features and stone tool artifacts from the deeper stratum dated to approximately 3500 years ago.

We hope you have enjoyed this glimpse into the archaeological heritage of Lawrence County, for it is merely a glimpse.  Hopefully it will inspire you to seek such publications such as Prehistory of the Upper Ohio Valley or Indian Paths of Pennsylvania.  Understanding and exploring our archaeological heritage is pivotal to our understanding of human behavior and our ability to change and adapt over time- just as the peoples of Lawrence County have done for thousands of years. Visit us again next week when we present some interesting archaeological information about Lebanon County.

References
Donehoo, George P.
1928       A History of the Indian Villages and Place Names in Pennsylvania. Harrisburg.

For more information, visit PAarchaeology.state.pa.us or the Hall of Anthropology and Archaeology at The State Museum of Pennsylvania .
Posted by PA Archaeology at 11:29 AM